Knysna Blaze: Hunt is on for the fire starter 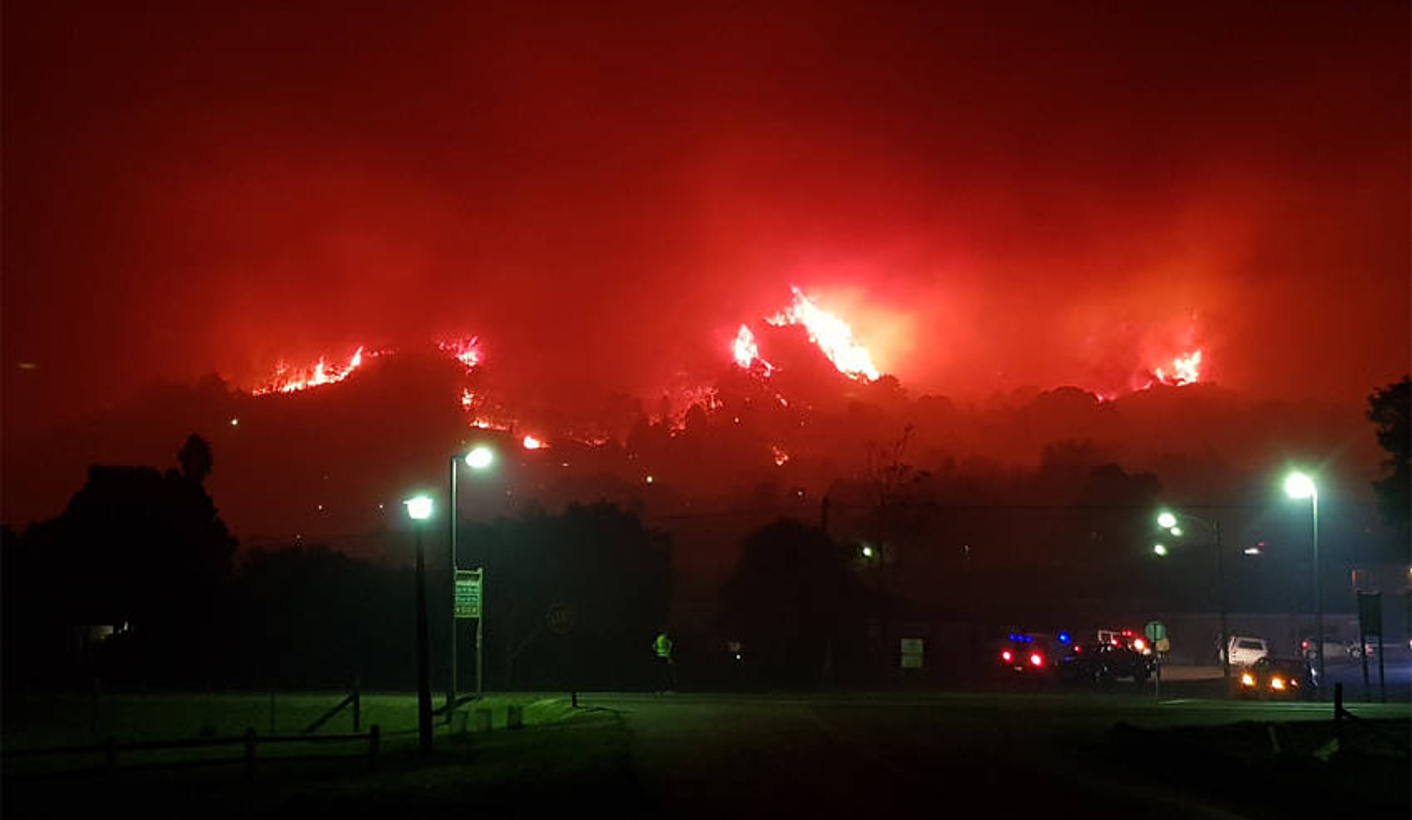 The Southern Cape wildfires have died down, but for someone, the burn is just beginning. Following the release of a forensic report into what may have caused the inferno, officials say the search is on for the culprits, who will face the full might of the law. Meanwhile, Knysna needs to find R4-billion to R5-billion to fix the damage. By MARELISE VAN DER MERWE.

The investigation into the cause of Knysna’s devastating fires is in all likelihood far from over, following the release of a forensic report that suggested human involvement.

Chief of Fire and Rescue in Knysna, Clinton Manuel, told Daily Maverick the investigation had been handed over to the South African Police Service (SAPS), which would be investigating the matter further, and that it was “highly unlikely” it would not be taken seriously, given that there were multiple deaths and extensive damage to property.

Mnqasela on Tuesday issued a statement saying the committee intended to ask the investigative team to present their findings in detail. “I’m going to ask them to come to Parliament, as well as the Head of Disaster Management in the Western Cape, together with local government and the district management, so that we can engage,” he told Daily Maverick. “We must discuss how this matter can be addressed, so that members of law enforcement can also talk to us.”

Mnqasela said the police investigation would not stop “with just registering the case”. “They need to track down these people and use all the available information so that we can exact the full might of the law,” he said. The Standing Committee would monitor the SAPS investigation, he added.

That being said, Manuel was quick to correct misconceptions that arson was involved. “Arson has a very specific definition,” he said. “It is more likely that whoever lit the fire was trying to keep warm or perhaps attempting to cook food. They may perhaps even have attempted to stop the fire. However, once the flames got out of control it is likely they disappeared very quickly.”

Officials in the area have called for a media briefing to dispel rumours and false information.

On Monday the report into the fires – which caused more than R4-billion in damage and claimed seven lives, including that of a firefighter – was presented to media. Massive damage was caused to infrastructure alone, and News24 reports that at least 1,000 homes were destroyed.

Manuel said the investigation, which began a day after the fires broke out on 7 June, delivered two main hypotheses: one, that the blaze was caused by lightning, and two, that it was man-made. Strong winds and invasive plant materials probably helped the blaze spread faster.

Manuel referred to two main areas, the V area (referring to the V shape the flames followed) and the non-V area. The first hypothesis suggests the fire started in the non-V area, and the second suggests it began in the V area near Elandskraal.

According to the forensic report, the notion that the fires were started deliberately boils down to the appearance of some burnt pine cones – commonly used as kindling – in an area where no pine trees grew, and in an area where the fire was estimated to have started.

Speaking to Daily Maverick on Tuesday, Manuel said it was unlikely the damage could be attributed to an Act of God.

“The report by Fire Chief Manuel is welcoming, as it brings us closer to finding the actual cause of the fire, which led to one of the biggest disasters in the history of South Africa,” said Mnqasela. “[This will] present us with an opportunity to give those who were affected by this disaster, especially families who lost loved ones, some form of closure.”

The budget for rebuilding Knysna is a story in itself. A breakdown of just some of the estimated costs includes the following: damage to health infrastructure nearly R1.5-million; agriculture R40-million; human settlements over R60-million; water over R90-million; environmental damage nearly R135-million; transport and public works R8-million, and social development R25-million.

Knysna Municipal Manager Kam Chetty told Daily Maverick around R496-million was needed for public sector reconstruction alone and that the municipal office would be applying for grants to national government, including the Department of Human Settlements, Department of Environmental Affairs, and the Department of Social Development and Department of Agriculture, Forestry and Fisheries. The remaining R3.5-billion was an estimate of private losses. However, the full R4-billion to R5-billion in damages to Knysna did not take into account the cost of a fresh police investigation, Chetty said.

Mnqasela told Daily Maverick that some of the existing budget for repairs would come from the appropriation of a disaster relief fund approved over a month ago. (In June, it was reported that R75-million had been set aside from provincial revenue.) However, there had also been large contributions from the private sector, Mnqasela added. There had been several public donations and corporates including ABSA, FNB, Standard Bank and Discovery had made large pledges.

These pledges have not been without their problems: in June, local government officials were obliged to warn the public to use only vetted bank accounts, so as to avoid scam artists; Mnqasela told Daily Maverick that there had been individuals claiming to collect money for Knysna who had not actually delivered the donations. “We are trying to trace those monies,” he said.

Nonetheless, he added, he is confident. “All of the interventions are aimed at putting Knysna back together, making it more settled than before,” he said. “We are trying to recognise the opportunity that comes with this.” A key focus was tourism-driven programmes, rethinking land use, and applying the spatial development framework to maximum effect, he added.

With an optimism that may raise eyebrows among environmentalists, Mnqasela noted the destruction had a silver lining in some cases. One family who had wanted to build a guesthouse but had been unable to get approval for an Environmental Impact Assessment were now able to go ahead and build, as the protected area no longer existed, he said.

Knysna Mayor Eleanore Bouw-Spies told media on Monday that officials were considering using more fire-resistant building materials to avoid similar disasters in future. A demo house would be put up as a pilot project once a suitable site had been identified, she said. (The City of Cape Town previously told Daily Maverick it had embarked on a similar project to roll out fire-retardant paint in townships following several devastating shack fires.)

Mnqasela commended Disaster Management Services for their deployment of the largest operational team of fire-fighting personnel in a single incident in South Africa’s history, while the Department of Health issued a statement on Tuesday listing the number of successful evacuations it had managed during the disaster.

However, the fires continued to draw controversy on social media, with some users questioning the rapid relief response and widespread media attention.

“Where are the reports of our burnt shacks? #Nonke (everybody)” tweeted one.

“Waiting for Absa to donate R10m for #JHBFire as they did for #Knysnafire. I hope my tweet has nothing to do with racism but with equality,” tweeted another.

“Whoever started the fire I salute you,” added a third. A fourth pointed out that there were many “black people in Knysna who suffered too”. “Hatred does not look good on any colour,” they said.

Mnqasela said he was confident local government was supporting everyone affected by the fires. It would continue to assist “all those who were affected by the disaster, making sure that they are able to swiftly get back on their feet”, he said. DM