Dear Shaun Abrahams, put up or ship out and let others do your job 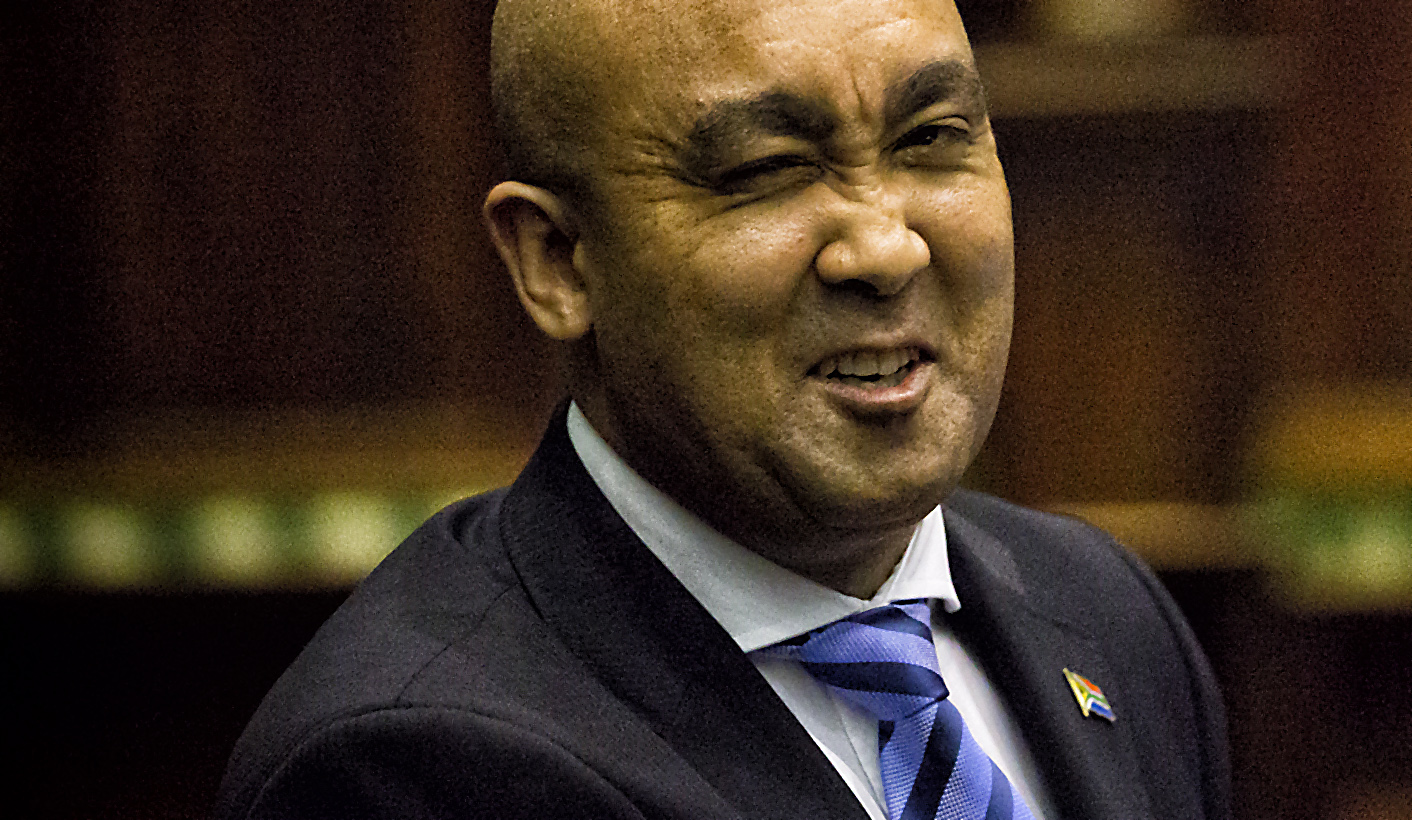 The current reopening of the inquest into the death of activist Ahmed Timol in 1971 while in police custody is a reminder not only of how history can sometimes come to haunt those who collude with an abusive, murderous regime but also of how the justice system in apartheid South Africa was used to shield and absolve perpetrators and their political principals. The time is upon us for those who are not captured in free South Africa to put up or ship out. The tsunami of evidence implicating the Gupta family in state capture has already crashed ashore. What’s it going to be, Shaun Abrahams (and Lieutenant-General Yolisa Matakata)? By MARIANNE THAMM.

Quick game, but you’re all probably going to immediately guess the answer because you’re clever that way.

And we all know how that ended. In the absence of truth, rigour, or integrity, NPA head Shaun Abrahams was forced to withdraw the spurious charges against Gordhan, former SARS Commissioner Oupa Magashula and former deputy Commissioner Ivan Pillay.

We knew you’d get it immediately and we will not, tempting as it might be, rehash the bumbling hounding of Gordhan, a saga that exposed the ease with which people who headed the NPA and the Hawks were prepared to abuse their office in service to those involved in a bitter factional battle within the ruling party.

And let us remind you: in that case the amount involved was R1-million, and they could not prove any wrongdoing. At the same time, Eskom CEO Brian Molefe’s pension package was a patently criminal R30-million, which Daily Maverick’s Pauli van Wyk has proven beyond doubt. Where was Abrahams’ reaction in Molefe’s case?

Abrahams’ Gordhan blunder was before the #GuptaLeaks but it was not as if Abrahams and then head of the Hawks, Mthandazo Berning Ntlemeza, had been oblivious to the mounting evidence of state capture, and the implication of those appointed to lead state-owned enterprises including Transnet, Eskom and Prasa, as well as the country’s top politicians, climaxing with President Jacob Zuma.

Former Public Protector Thuli Madonsela released her explosive State of Capture Report on 2 November 2016. On 27 November, new PP Busisiwe Mkhwebane confirmed to DA Leader, Mmusi Maimane, that she had forwarded the State of Capture report to the NPA and the Hawks to investigate.

One of Madonsela’s instructions, of course, was the appointment of a Commission of Inquiry headed by a judge not to be appointed by the president. President Zuma has taken the remedial action on review while the ANC’s NEC has accepted a proposal for the commission of inquiry.

Since then little has happened but the squeeze is on and those who have been orchestrating a pushback against justice know it.

As private sector entities – including auditing firm KPMG, German software multinationals SAP and AG, global consulting firm McKinsey and Liebherr-International – have been exposed in the Gupta extensive corruption/kickback matrix and those implicated have been suspended, the NPA and the Hawks can no longer stall or apply Zuma’s Stalingrad strategy in relation to delaying or obstructing investigations.

At the weekend Afriforum announced that former NPA veteran prosecutor Gerrie Nel, who resigned in January to head up a private prosecutions unit, is ready to pursue two cases, one criminal and one involving government corruption.

Afriforum CEO, Kallie Kriel, reportedly said the organisation was awaiting a “nole prosequi” (or a declaration by the NPA that it declines to prosecute) before proceeding. It will have 90 days to prosecute the case once Abrahams has issued the declaration.

Meanwhile, weekend reports suggest that Abrahams may have been prodded to action, appointing a “State Capture team” to be supervised by acting head of the NPA’s specialised commercial crimes unit, Advocate Malini Govender who has, we must highlight, successfully sat on a completed investigation into President Jacob Zuma and whether he should be prosecuted for corruption related to Nkandla since 21 August 2015.

This new unit has reportedly been requested to help the Hawks to “fast-track” State Capture investigations, but before you get excited, they are not going to wander anywhere off the road less travelled. For now all this “unit” will be looking at is Madonsela’s report, which has been radically eclipsed by the #GuptaLeaks.

The NPA has continuously bleated that it is being unfairly criticised for tardiness and for not having the spine or appetite to act independently to bring the state capture plunderers to book. It’s the Hawks that the NPA accuses who lack the capacity and will to act.

The NPA has a bit of a point here.

Daily Maverick is in possession of an email sent by a very senior Hawks official (we shall refrain from naming him at this point – the email is so embarrassing) to a private forensic investigator informing him that he [the Hawks investigator] is in a “pickle” with regard to the #GuptaLeaks emails.

“I did not expect the Wiki leaks to be in this magnitude. I am approaching you now because I am pickle as I must follow up on some of the matters that were reported in the media on the Gupta leaks. Since obviously the journalists would not validate the authenticity thereof, I would need someone to validate the authenticity before we can approach the courts to subpoena the owners of the emails, and the people implicated therein”.

Err, Wikileaks? Is that the best you could do?

Point is, there is enough evidence in dockets that have been registered for this Hawks official not to have to rely on the #GuptaLeaks or a private investigator to help build watertight cases. The official could also simply refer to OUTA’s detailed and extensive State Capture docket with all its annexures. It’s all in there and the fact that this specific Hawks official appears to be clueless is not exactly a surprise.

Corruption Watch and other civil society organisations are not depending on the NPA or the Hawks to arrest (so to speak) the corruption and plundering by charging or apprehending those who have been exposed in the mountain of evidence that is in the public domain.

The Gupta family – most of them South African citizens – appear not to have even been questioned, in spite of rumours that the family is seeking information about how to move billions to the UAE under a lovely little treaty which came into effect in March this year.

In October 2016 Abrahams put on a great performance, attempting to exude authority, gravitas and independence, telling the South African public that “the days of disrespecting the NPA were over”. Did he mean that for us – the taxpaying South African citizen – and not the criminals?

It does appear Abrahams will go down in history as a man accused of being captured (or perhaps threatened and frightened by some secret threat to his reputation, rumours of which abound in certain circles) and who did not use his powerful position to prevent the wholesale plunder of the democratic state.

There is such a deficit of trust in Abrahams and the NPA that Corruption Watch and other civil society organisations are contemplating appealing to authorities in the US to to bring the Guptas and their proxies to book, as the family’s international money laundering is prosecutable under the Foreign Corrupt Practices Act.

In the meantime, OUTA Chief Operating Officer Ben Theron announced on 702 on Sunday night that the organisation would be lodging charges against the Hawks on Monday morning, forcing the directorate to act in the matter related to massive corruption at Prasa.

The tenure of the current board under chair Popo Molefe, who brought the charges involving around R24-billion in fruitless expenditure to the Hawks, ends on Monday. Molefe has accused the Hawks of deliberately delaying the investigation in spite of evidence by altering leadership teams and structures. The NPA and the Hawks are opposing Molefe’s court action.

Ultimately Abrahams is going to have to show his hand (well at least his other one). He has appealed the ruling by the High Court to reinstitute the 783 charges of fraud, corruption and racketeering against President Jacob Zuma and has been absent in the deluge of corruption that has enveloped the country. Gerie Nel’s “nole prosequi” push will be the first of many as the NPA continues to fail the country.

Unless he is in the middle of winter hibernation, Abrahams must surely be fully aware of what is truly going on and that he will soon be standing at the edge of a cliff of his own making. Will he jump and join President Zuma, his son Duduzane, Brian Molefe, Mosebenzi Zwane, Des van Rooyen, Faith Muthambi, Kebby Maphatsoe, Ace Magashule, and countless others who have been implicated, or will he, in face of overwhelming proof, do the right thing?

We are not holding our breath.

So, Shaun. Whatever they have on you, South Africa, and people around you, will forgive you. All you need to do is to do the right thing and follow the laws of South Africa you swore to uphold. Nothing more.

But if you do anything less, history will judge you harshly. Will you be The One that kids will be taught about, The One who let the thugs steal the country under his nose? The Weak One?

In other words, Shaun, put up, or ship out, and let someone who can do the job save South Africa from the kleptocrats. Or find yourself one day rotting in the dustbin of history. DM