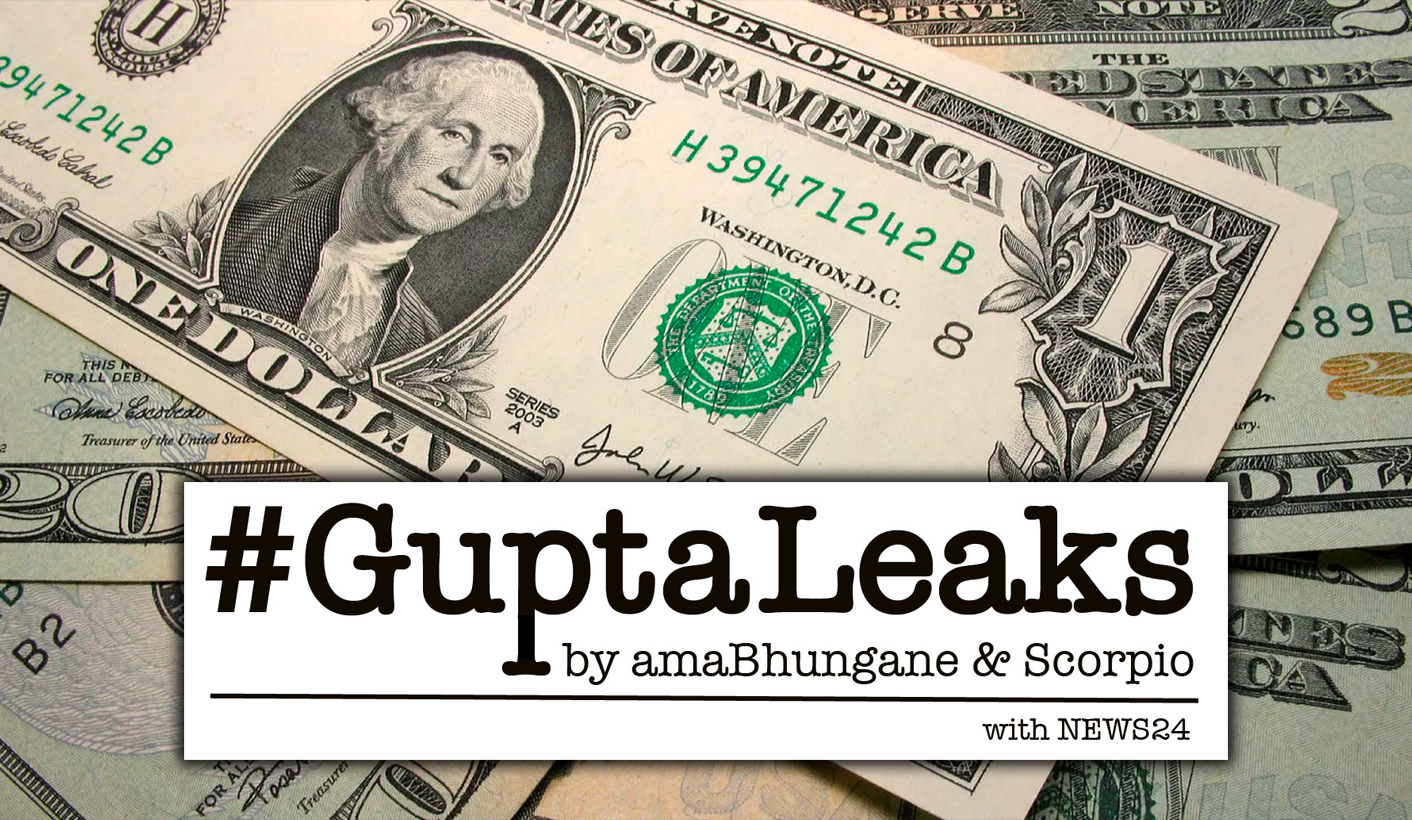 Many kickbacks paid to the Guptas and subsequent money movements were in US dollars. Some washed through US accounts and a US-listed corporation has been implicated. This means the entire alleged conspiracy could be exposed to US investigation and prosecution, according to stringent anti-corruption laws there. By AMABHUNGANE and SCORPIO.

To date, the apparent efforts of the Hawks, South Africa’s priority crime-combating unit, to investigate any of the voluminous allegations made against the Guptas have been minimal to non-existent.

But the Guptas’ repeated use of US dollars to move their kickbacks around the globe, along with previously hidden ties to US companies, may render the Hawks’ efforts (or lack thereof) irrelevant.

Under American anti-bribery and anti-money laundering laws, one link to the United States could expose all members of any broader conspiracy to the jurisdiction of American courts.

In addition to personal US criminal liability, ill-gotten gains are also at risk.

The US Department of Justice’s Kleptocracy Asset Recovery Initiative recently seized billions of dollars of assets – including bank accounts, real estate, art, jewelry, aircraft and yachts – located around the world.

When announcing the latest such seizure last Friday – stemming from contracts corruptly obtained by bribing Nigeria’s former oil minister – a senior official at the US Department of Justice remarked:

“Corrupt foreign officials and business executives should make no mistake: if illicit funds are within the reach of the United States, we will seek to forfeit them and to return them to the victims from whom they were stolen.”

The Guptas’ dealings with software giant SAP potentially provides US authorities with a clear means of getting their foot in the door.

Although headquartered in Germany, SAP’s stock trades on the New York Stock Exchange, thus making the company subject to various US laws, including the Foreign Corrupt Practices Act (FCPA).

By the end of the week, SAP had replaced its executive team in South Africa and had launched both internal and external investigations, the latter being led by US law firm Baker McKenzie.

To receive maximum credit for cooperating – thereby potentially reducing recommended fines by half – companies are expected to thoroughly investigate and self-report FCPA violations to US authorities.

To be eligible for any such credit, companies are further required to hand over “all relevant facts about individuals involved in corporate misconduct” to the US Department of Justice.

US Dollar and Gmail snares

Forthcoming instalments of the #GuptaLeaks will further detail the Guptas’ frequent transactions in US dollars – the Guptas’ currency of choice of when moving hundreds of millions of dollars to and from its Dubai bank accounts.

For instance, the #GuptaLeaks reveal that much of cash sloshing through the Dubai accounts are the proceeds of so-called “consulting” contracts such as the China South Rail-Transnet contract previously detailed by amaBhungane.

The #GuptaLeaks also reveal that communications related to the CSR kickbacks were carried out using US-based email providers.

Major US law firm, White & Case, explained how such US-dollar transactions and even emails can put someone within the very long reach of US laws, including anti-bribery laws.

“Many US laws — including the Foreign Corrupt Practices Act in certain circumstances and various antifraud statutes  — may establish jurisdiction over a crime whenever it involves the use of any ‘means or instrumentality of interstate or foreign commerce’.

“The term is broadly defined by US authorities and may cover any communication or movement that crosses state or international borders, including wire transfers, emails, phone calls, mail and travel.

“Given the reach of US commerce, from free email servers to correspondent banks that clear US dollars for non-US based banks, such a broad definition can significantly increase the reach of US law.”

Beyond transferring many millions of dollars through US-based correspondent banks, the Guptas, their associates and many political figures linked to them frequently used US-based email providers, such as Gmail, Yahoo and Hotmail.

These US-based email accounts were used to communicate on a wide variety of topics including the Sun City wedding expenses, the near-daily US dollar movements to and from Dubai, as well as to make arrangements with parties in the United States who received funds from the Guptas’ accounts in Dubai.

“This offense is called ‘money laundering,’ and non-US corporations and foreign nationals may be subject to prosecution under US federal anti-money laundering statutes if they are involved in the transfer or attempted transfer of illegally obtained funds or funds used to further criminal activity.”

The Guptas’ forwarding their ill-gotten gains to a US-incorporated company could potentially run afoul of such laws.

AmaBhungane and Scorpio revealed that over US$1-million paid by Swiss crane manufacturer Liebherr ultimately ended up in a US company, Brookfield Consulting, owned by apparent US-citizen relatives of the Guptas.

Roughly another US$9-million – apparently originating with China South Rail’s “consulting” contract –  was also wired to Brookfield in the United States.

Individuals comfortably sitting in South Africa or Dubai might be unaware of the US legal risks created by the actions of merely one member of a broader conspiracy.

White & Case further explains that one link to the United States could expose all members of any broader conspiracy. “Conspiracy law may subject non-US companies or individuals who have not committed an act within the United States to US criminal jurisdiction.

US officials have described the FCPA and the Kleptocracy Asset Recovery Initiative as “two sides of the same anti-corruption coin.”

Former US Attorney General Loretta Lynch explained:  “Since it was established in 2010, the Kleptocracy Asset Recovery Initiative has been an effective tool in our ongoing efforts to curb high-level public corruption around the world. As we move forward, the Department of Justice will remain committed to using all the resources at its disposal to ensure that government funds go to their lawful purposes; that stolen assets are returned to state coffers; and that corrupt officials are held fully accountable for abusing their positions.”

Over the past few years alone, the US has seized many billions of dollars of ill-gotten cash and assets.

In Uzbekistan, the daughter of the former president received over US$800-million from telecom companies. US authorities seized US$850-million sitting in accounts in Switzerland, Belgium, Ireland and Luxembourg.

The mere fact that these funds were moved in US dollars – and thus transmitted through the US – was sufficient to seek their forfeiture.

The US Department of Justice noted that the president’s daughter’s “associates laundered the corruption proceeds through accounts held in Latvia, the United Kingdom, Hong Kong, Ireland, Belgium, Luxembourg and Switzerland.   The illicit funds were transmitted through financial institutions in the United States before they were deposited into accounts in these countries, thereby subjecting them to US jurisdiction.”

Last month, the US announced the latest in a series of seizures related to Malaysia’s 1MDB scandal – bringing the total grabbed by US authorities in that case alone to $1.7-billion.

The US Department of Justice’s characterisation of the Malaysian scheme undoubtedly rings true for many South Africans:

“Today’s complaints reveal another chapter of this multi-year, multi-billion-dollar fraud scheme, bringing the total identified stolen proceeds to $4.5 billion. This money financed the lavish lifestyles of the alleged co-conspirators at the expense and detriment of the Malaysian people. We are unwavering in our commitment to ensure the United States is not a safe haven for corrupt individuals and kleptocrats to hide their ill-gotten wealth or money, and that recovered assets be returned to the victims from which they were taken.”

“These cases involve billions of dollars that should have been used to help the people of Malaysia, but instead was used by a small number of individuals to fuel their astonishing greed.”

“The misappropriation of 1MDB funds was accomplished with an extravagant web of lies and bogus transactions that were brought to light by the dedicated attorneys and law enforcement agents who continue to work on this matter. We simply will not allow the United States to be a place where corrupt individuals can expect to hide assets and lavishly spend money that should be used for the benefit of citizens of other nations.” DM