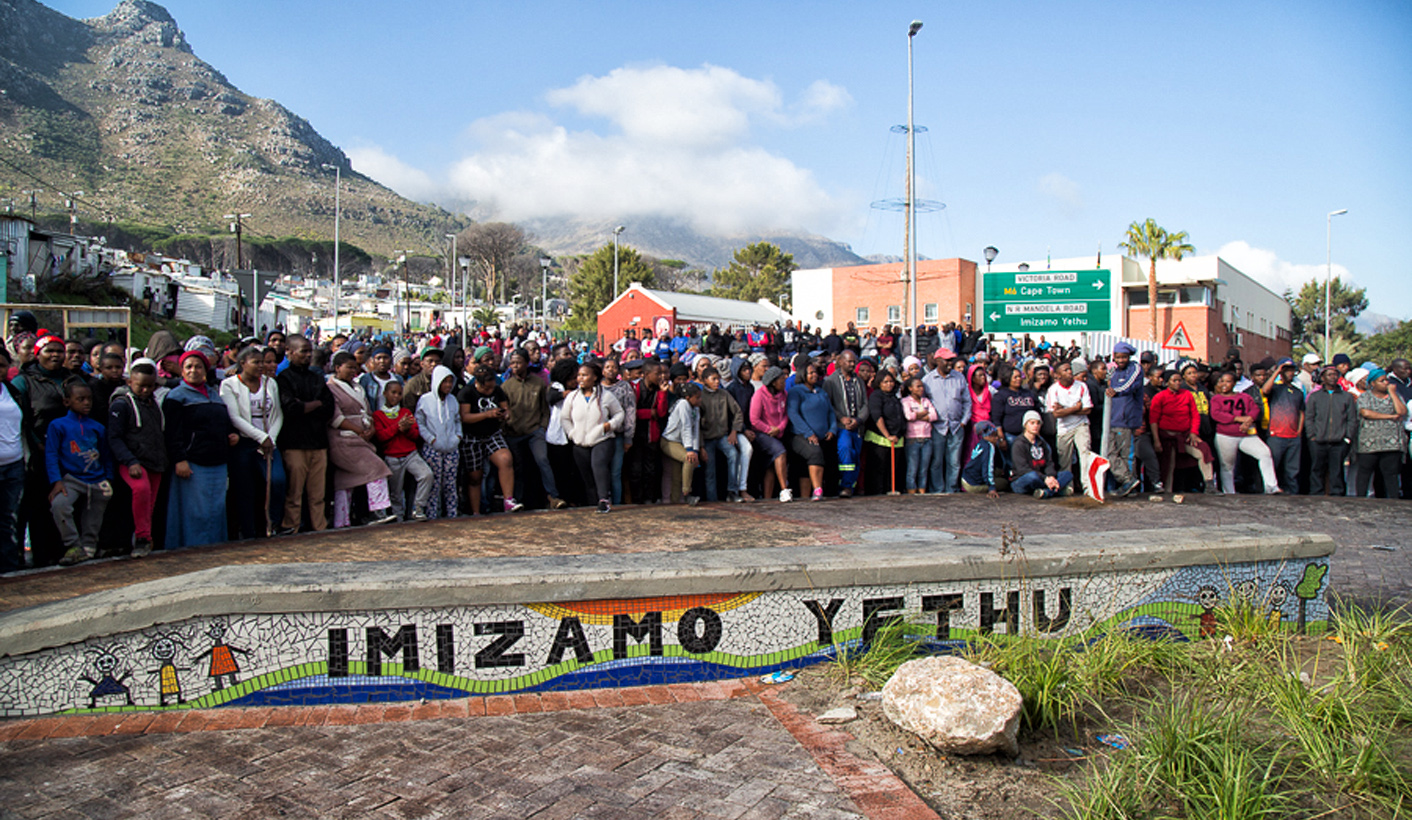 The death of a protester on Tuesday has complicated an already fragile relationship between residents of Imizamo Yethu and city officials, as the community waits for the mayor to make good on her promise of overseeing the delivery of basic services. By ROBERT EXLEY and SHAUN SWINGLER for CHRONICLE.

Standing on the edge of the soccer field that has become the not-so-temporary home to hundreds of Imizamo Yethu residents since March, the calmness is jarring. Seventy-two hours prior, the place was a chaotic battleground echoing rocks on zinc, rubber bullets and body-shaking stun grenades. Riot police clashed with residents fed up with promises of services and no delivery. One of them, Mkhululi Ndude, 34, stands nonchalantly with a group of fellow community leaders watching children play soccer. They’re discussing the death of his brother, Songeza.

On Tuesday Songeza Ndude, 26, succumbed to injuries allegedly sustained by a rubber bullet fired at him by police, during Monday’s violent protests outside the Hout Bay police station.

“It’s a fact of life,” said Ndude. His nonchalance speaks volumes about the realities of this place.

Residents in the temporary relocation area attempt to repair their shacks after storms hit Cape Town on 7 June.

South African Police Services (SAPS) Spokesperson Noloyiso Rwexana confirmed the fatality but stated that the case had been handed over to the Independent Police Investigative Directorate (IPID) for investigation.

Spokesperson Moses Dlamini confirmed that IPID is conducting a preliminary investigation into the matter, but said it wasn’t clear yet whether Ndude’s death was caused by the action of the police.

A protester walks past burning shack material at the entrance of Imizamo Yethu.

“We await the outcome of the post-mortem to assist in determining this,” said Dlamini. “If the post-mortem confirms that the death was due to police action, we will conduct a full investigation.”

“He was a brilliant guy. He was a soldier,” said Ndude of his brother, explaining that he had died fighting for the community to get basic services like water and electricity. “He will rest in peace when we get services delivered,” Ndude said.

Residents of Imizamo Yethu affected by a devastating fire in March were relocated to a temporary housing area on a sports field close to the township’s entrance. The area affected by the fire was approved for reblocking, where new roads and firebreaks will apparently be constructed to give better emergency access if needed in the future.

At the time, Mayor Patricia de Lille assured the relocated residents that the process would be completed in three months, that they would be able to leave the temporary relocation area and return to their homes once the re-blocking was completed. The project stalled and some residents began to rebuild their homes themselves. The City obtained a court interdict blocking anyone from rebuilding on the land demarcated for reblocking. Now it’s nearly five months later and the displaced residents are still living in the cold and wet temporary relocation area.

“All the contractors are on standby,” said Councilor Bheki Hadebe about the City’s plan to deliver services, “but they need to feel safe.” Hadebe said that people’s refusal to relocate makes it very hard for the City and contractors to complete their work.

The City says it started issuing notices of a court order for residents to relocate yesterday and is waiting to see how they will respond.

“We’ve been in these houses for over three months now,” said Hazel Zolwana, 65, a resident of Imizamo Yethu and more recently of the temporary relocation area. “We have no electricity and we have to share those stupid toilets,” she said, pointing towards a row of ramshackle chemical toilets that residents complain are constantly full and often unusable.

A child washes clothes in the temporary relocation area.

Zolwana’s four children and seven grandchildren also live in the makeshift camp. “I just want it to feel like home,” she said, showing off the furniture and kitchenware she has managed to preserve in her lean-to. Zolwana said the protests were the result of a community-wide loss of hope and the prevailing sense of being ignored.

Many share her long-term disillusionment. “We are called hooligans. We are called criminals,” said 34-year-old resident Sharon Citabatwa. She said their original plan was to block the road as a way to draw attention to the dire conditions faced by the community.

“When you wake up in the morning it’s like there’s rain inside your house,” she said, referring to the poor insulation in her corrugated iron shack. “The walls are wet, the blankets are wet, everything is wet.”

Monday’s protest brought their frustration to a head. Residents set fire to a vehicle and whole sections of their shacks in an effort to force De Lille to come and address the community. She eventually did.

The temporary relocation area Imizamo Yethu residents affected by the fire were moved to.

“First it was the fire, then the storm, and now the bullets,” said Citabatwa, adding that she believes the mayor understands the situation, but emphasising that she wants to see action.

Brenda Zemba, 29, shows the bruise she sustained on Monday from a rubber bullet during protests.

“The only way people are heard is when something is broken,” she said in response to those who admonish the protesters as troublemakers looking for an excuse for violence. “We are in need of help. We are in need of services.”

According to community leaders, Mayor Patricia de Lille has promised that changes will begin next Monday. In a press release from the Mayor’s office on Tuesday, De Lille promised to accelerate the reblocking process.

A child climbs onto a car burned by protesters.

“Together with the community leadership we agreed that we are going to accelerate reblocking across three areas (Madiba Square, the Shooting Range site and Donste Yakhe). We will work in all three areas at the same time.”

It’s understood the City will be working closely with community leaders to ensure progress is made. DM