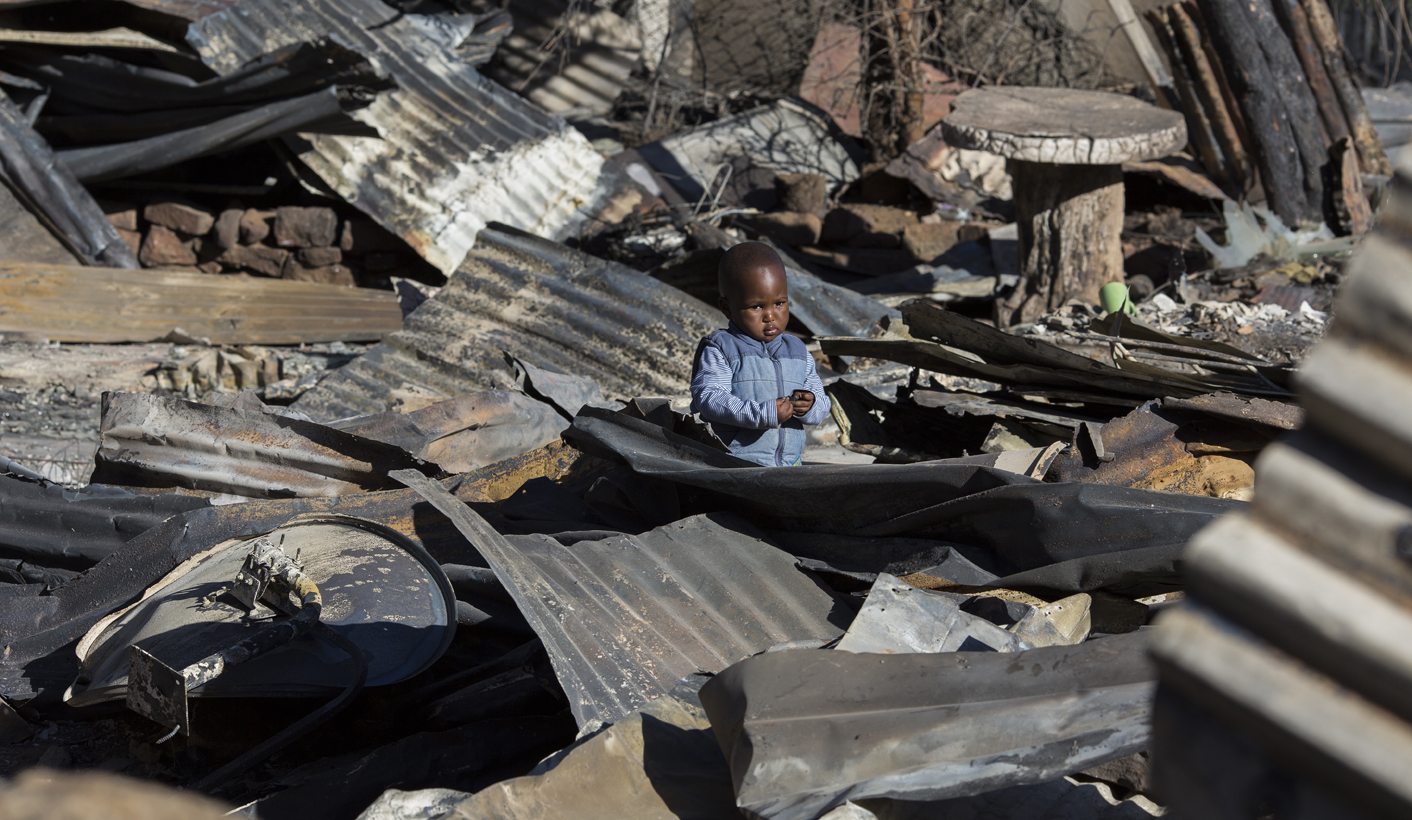 Another weekend of fire in the Western Cape saw at least nine people perish and thousands left destitute. The worst affected area was Imizamo Yethu, the informal settlement outside Hout Bay, where an estimated 15,000 people lost homes and possessions. It’s a pattern repeated year after year, but can anything be done to stop the cycle? By REBECCA DAVIS.

On a hot, blustery Monday morning in Imizamo Yethu, hundreds of people queued in a line outside a community hall. Plumes of smoke were still rising on the mountains above Hout Bay, while helicopters darted to and fro with containers of water.

“We’ve halved this queue already this morning,” one volunteer said, eyeing the long snake of people waiting for assistance. She wouldn’t give her name, but said she was there from Hout Bay NGO Thula Thula, which was co-ordinating relief donations. “Yesterday we had 3,700 people through here.”

The Imizamo Yethu residents were being processed in two ways. On one side of the hall, officials from the City of Cape Town were registering the plot numbers on which shacks once stood. Dispossessed residents would then be issued with “starter packs”: a kit for building another shack which consists of zinc walls and a roof, support beams, a window, door, and screws and nails.

On the other side of the hall, Thula Thula volunteers were registering all comers on an app, recording how many people lived in each shack. They were then given a care pack: basic toiletries; a loaf of bread.

Welcome to the aftermath of fire in an informal settlement. This particular blaze on Saturday is believed to have destroyed 3,500 structures, in which an estimated 15,000 people lived. At least two people died.

The City of Cape Town described this as one of the worst fires in Hout Bay’s recent history, but it is by no means an isolated incident. In 2015 alone there were four fires in a year at Imizamo Yethu, leaving thousands homeless. The Hout Bay township is particularly vulnerable to fire because of its overcrowding. As far back as 2006, the City of Cape Town announced that it had to act on the “fire safety and environmental health hazards” posed by the informal settlement.

Disaster management spokesperson Charlotte Powell told the Daily Maverick that the cause of the most recent blaze was still undetermined. “Wind played a vital role in the spread of the fire, and in such a high density population, fire burns very quickly,” she said. News24 had earlier reported that another contributing factor to the scale of the disaster was the difficulty faced by fire engines getting close to the flames because of “frightened people gathered on the road with their possessions”.

In Imizamo Yethu, people have little enough to begin with. An outbreak of gang violence in the area in 2015 was attributed to the high levels of youth unemployment. Little exists in the way of formal sanitation, and shacks jostle for space. Of the thousands of people arriving at community halls on Sunday and Monday for assistance, it was impossible to tell how many had actually lost their homes in the fire, and how many were simply there in the hope of free food.

“There is no way of verifying,” said a Thula Thula volunteer. “We’re helping whoever comes in with a shack number.”

Powell paid tribute to the generosity of Cape Town’s public, who had come forward with large numbers of donations of food, blankets and clothing, adding to the Cape Town Cycle Tour resources donated by Pick n Pay. By Monday, NGOs had also leapt into action. The Red Cross had established a marquee for emergency shelter on a field opposite the fire station, with workmen busily rigging electricity and putting out portaloos. Those left homeless were also to be temporarily accommodated in community halls.

The City of Cape Town was “engaging with the community to rebuild”, Powell said, and working on repairing infrastructure damage. She said that a fire task team looking at interventions to prevent further disaster on this scale was under way.

For the residents of Cape Town’s informal settlements, however, these measures are the equivalent of putting a Band-Aid on a chronic wound. The inhabitants of townships like Khayelitsha have previously claimed that fires in informal settlements are not attended to as swiftly as blazes affecting wealthier areas. The City of Cape Town, meanwhile, has maintained that the labyrinthine layout of townships makes it far more difficult for emergency services to do their work effectively.

The major problem, suggests the Social Justice Coalition’s Axolile Notyala, is the government’s perception of informal settlements as a whole.

“The issue is that informal settlements are still categorised as temporary,” Notyala told the Daily Maverick. “As a result they are constantly treated as if in emergency response to crisis.”

Hout Bay community leader Samkele Krweqe told the Sunday Times that the current situation was one that they had faced many times before.

“Officials will also promise us that ‘something will be done about this situation’. That has been the story of our lives,” he said. “People need houses.”

Notyala maintains, however, that with the promise of government housing still a distant dream for many, an urgent interim step should be greater attention paid to the resource needs of townships.

“One of the national programmes many municipalities have failed in is the upgrading of informal settlements,” Notywala said. “The focus cannot be just to provide a house, rather than upgrade the existing settlements.” DM

Photo: A boy looks over the remains of his home after a devastating fire in Mandela Park Imizamo Yethu in Hout Bay, Cape Town, South Africa, 13 March 2017. According to the City of Cape Town, over 15,000 residents of Mandela Park in Imizamo Yethu have been affected with about 3,500 informal structures gutted by a blaze that swept through Hout Bay on 11 March 2017, claiming at least two lives. EPA/NIC BOTHMA