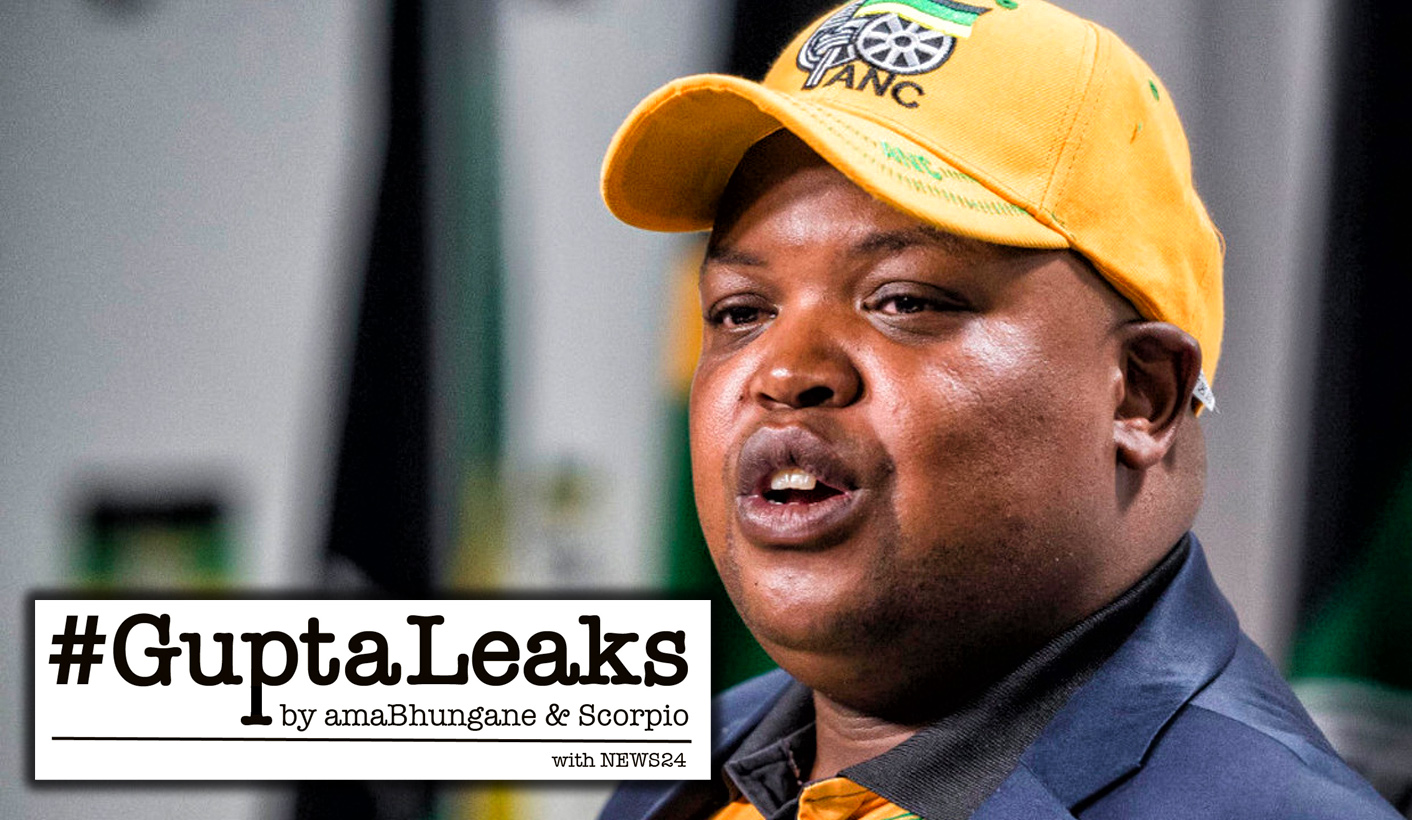 A month after UK-based PR firm Bell Pottinger’s Financial and Corporate partner Victoria Geoghegan billed a Dubai-based company, part-owned by Gupta family lieutenant, Salim Essa, £100,000 for a consultation with President Jacob Zuma’s son Duduzane Zuma, the political spin doctors made a second trip to South Africa. This time they charged £34,086 for a four-day trip which included a suggested speech for Collen Maine for the ANCYL’s National Rally on 7 February 2016 in Tshwane. The team also composed a statement for the MK Veterans Association and suggested the firm might like to add to a statement by ANC North West Chair, Supra Mahumapelo, with regard to EFF leader Julius Malema’s threats to ban ANN7 journalists. By SCORPIO and AMABHUNGANE.

Six members of the Bell Pottinger team flew into Johannesburg from London between February 3 and February 7 2016 on a four-day boot camp to assist Gupta family businesses, the ANCYL, as well as Kebby Maphatsoe’s MK Veterans Association to communicate a narrative about the country’s economy from Oakbay’s perspective.

On February 6, 2016, a release by Mlondi Mkhize, National Spokesperson for the ANCYL, with regard to a national rally that was due to take place on February 7 in Tshwane, was forwarded to the Bell Pottinger team, a trove of emails known as the #GuptaLeaks has revealed.

On the same day Victoria Geoghegan thanks the team for forwarding the notice, adding, “Are we able to supply points for the ANCYL leader? Can you find out from Mondli which journalists they are expecting to attend/report on the march?”

Later the same day, Geoghegan sent an email to the Bell Pottinger team as well as Gupta associates, including Oakbay CEO, Nazeem Howa, and Sahara Computers head of sales and marketing, Santosh Choubey, stating, “Please see below suggested content for ANCYL leader. This is deliberately short to ensure a clear message and soundbites for media.”

This means that the poorest people in South Africa remain significantly disadvantaged and are unable to work their way to better lives.

It is clear that this system needs to be ended once and for all and for inequality to be properly addressed.

Talent and hard work need to be recognised and rewarded and profits shared.

The privilege of the few needs to be replaced with opportunity for all.

We need to END ECONOMIC APARTHEID.”

The following day, Bell Pottinger’s Nick Lambert thanked Choubey for forwarding a YouTube clip of Maine speaking saying “some very interesting remarks by the Youth Leader, and some good messages for us”.

He highlighted some of Maine’s key moments as “early remarks:

White monopoly capital decides what is printed in media.

Unemployment persists”, as well as “the EFF seeks to destroy those who tell good news in the media, and which is in the interests of our country – in particular ANN7 and New Age – these are for the people”, and “ANC respects the people, the markets do not.

The markets are controlled in London.

What they are doing to the Rand is not ok.”

The previous day, 5 February, Geoghegan edited and added to a draft statement penned by Oakbay CEO Nazeem Howa on behalf of the the MK Veterans’ Association with regard to Tegeta Exploration’s buying of the Optimum and Koornforntein coal mines. Howa’s was a short statement to which Geoghegan added several paragraphs attacking the EFF.

In the end, the statement (with Geoghegan’s additions in red) that was sent out on behalf of MKVA read:

“The MKVeteran’s Association wish to address two areas of concern and recent controversy.

Firstly, the disgraceful and threatening statements made in the last couple of days by the leadership of the EFF. Threatening the safety and security of workers and committing to physically drive people out of South Africa on the basis of their race is behaviour unbecoming of our people, our democracy and our Constitution. It is beneath the contempt of those who fought to end Apartheid.

Now is the time for all those who have chosen to make political capital from this issue to end the rhetoric of intimidation and violence. Our country should be about opportunity for all, not threats to a few employers, enterprises and employees. We want to see the wealth of our country grow and be shared more widely. The rhetoric of violence and intimidation does nothing to deliver greater opportunity and prosperity and instead threatens jobs and growth.

What starts as a crude rhetorical attack on one South African family of Indian origin can quickly escalate to attacks on all families of Indian origin born here and then to white families living here and then to all foreign investors in our country. Where does this racist rhetoric end? With fewer jobs, lower growth and less investment. All South Africans – regardless of origin – are worse off as a result.

Secondly, the ANC Military MK Veteran’s Association has met with the shareholders of Tegeta Exploration and Resources, the black-owned entity involved in buying Optimum Coal Mine and Koornfontein Mine.

We were briefed on the transaction and , the events that led up to it and its rationale signature of the deal. We now understand the role of the Gupta family in the transaction as a minority shareholder and we asked for further details on issues where we needed further clarity. All in all, We left the discussions happy about this transaction and its impact in saving the jobs of more than 3,000 people. It will also and ensureing stability of the power grid, which is vital for our country’s future economic growth, successful job creation and expanding opportunities for all.

We are saddened by the misinformation and speculation doing the rounds about the transaction. This damaging speculation and the threatens that it presents to the jobs and livelihoods of at Optimum’s workers. The Company is which is likely to be liquidated should the transaction not close.

We support our sister organisation, the ANC Youth League, in its campaign to deliver on the much required black economic emancipation, and we certainly see this transaction as a step in the right direction.

We hope This deal will pave the way for many more black entrepreneurs industrialists to enter the industry and ensure that the benefits of our country’s South Africa’s mineral wealth is shared by all South Africans. It is only through truly opening our economy that true emancipation will come to our people”.

The Bell Pottinger team were kept busy during their visit.

One of the tasks, it appears from leaked emails, is an offer to assist ANC Bokone Bophirima Provincial Chairperson, Supra Mahumapelo, with a statement issued by his behalf by media officer Diale Kgantsi and attacking EFF CIC Julius Malema for banning ANN7 journalists from EFF events.

Geoghegan writes on 6 February, in response to the statement mailed to her:

“This content is broadly fine. If we think that the material will have more gravitas, or get more media pick up either *going out from ANC central command; and or * from one of the provinces…then we recommend that that take place.”

A message from the Bell Pottinger team reads, “this was released by one of the provinces. If you want to add something and release by the other provinces we will felicitate (sic). Kindly Advise”.

On 7 February, Geoghegan sent a note to the South African team confirming “actions” which included “BP to develop narrative”, “BP to draft Q&A” [About Oakbay and the Gupta family’s business interests], “SA team to forward requested facts”, “SA team to provide regular updates to BP re: on the ground developments.”

On February 11, long after Bell Pottinger had done their work and were safely back in London, Nazeem Howa forwarded to Bell Pottinger’s Nick Lambert a YouTube clip of ANC Deputy Secretary General, Jessie Duarte, being interviewed by the SABC:

“Thank you. Some very positive messaging in this for us. Particularly like that Duarte’s language echoes that of Bell Pottinger’s mail from Sunday night. Let us deal in ‘cold, hard facts’ not innuendo.”

Daily Maverick approached Duarte with regard to Lambert’s comment. She responded that she had never met Bell Pottinger nor did she discuss any narrative with anyone.

“I answered questions put to me by an SABC journalist. I did not know what I would be asked. I also want to add that I have never discussed with any person how to answer questions,” said Duarte.

A request by the Daily Maverick to Geoghegan for an interview with regard to these as well as other revelations in the leaked emails has remained unanswered. DM