Analysis: While Zuma may want to be like Mugabe, South Africa is not Zimbabwe 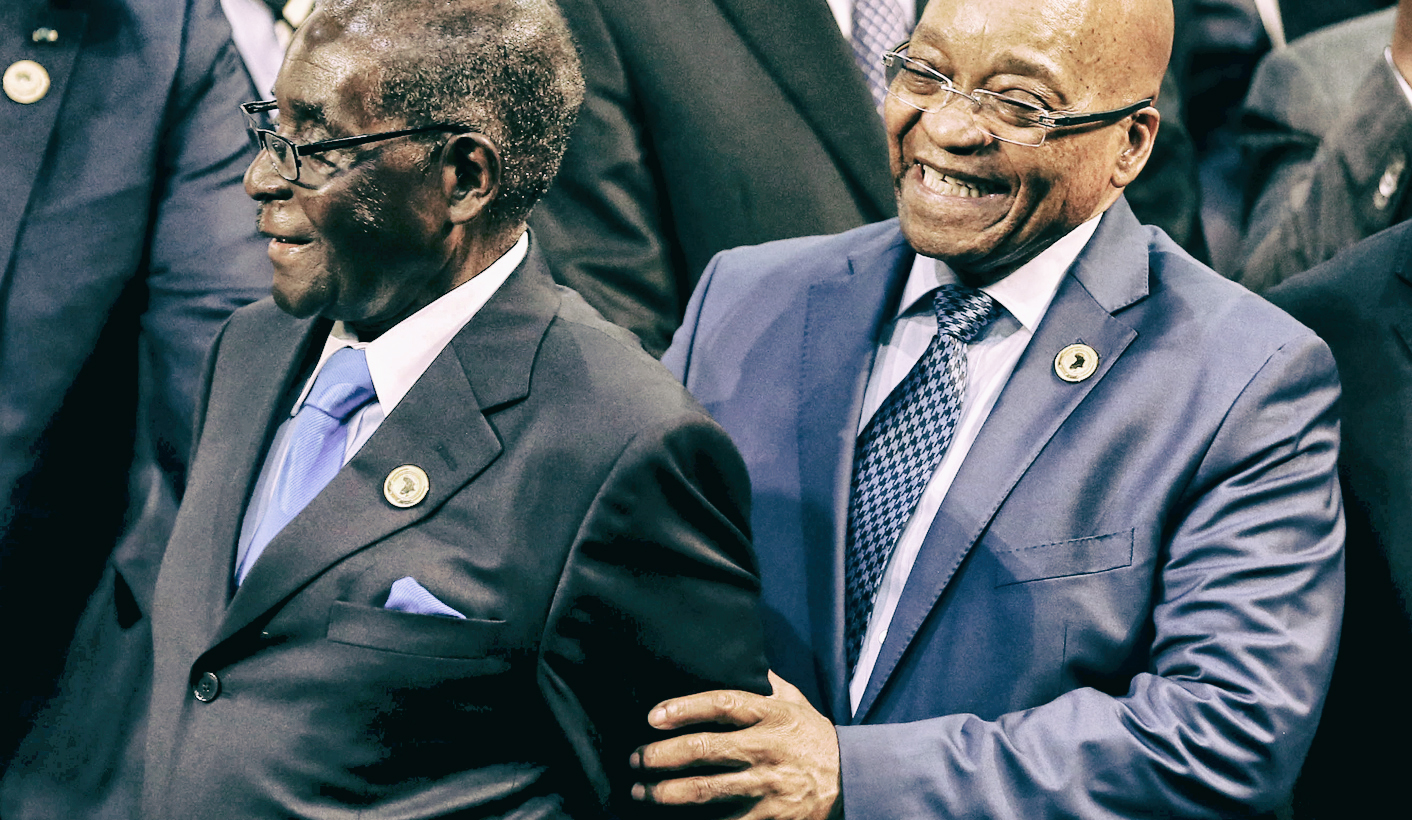 When reaching for ways and examples to understand what is happening in our politics, it is common to hear the more alarmist among us (and in British newspapers) suggest that President Jacob Zuma and his cronies are beginning to act in a way similar to Robert Mugabe and his ZanuPF. For some people, the only way to analyse our political situation is through the prism of Zimbabwe. Some of this is correct – there are indicators that Zuma, and some of the people around him, would like to act as Mugabe has. But the claims that South Africa will end up like Zimbabwe are deeply flawed. By STEPHEN GROOTES.

To listen to some of our recent headlines is to hear all sorts of resonances with Zimbabwe. We have young men who claim, impossibly, to be military veterans of the liberation struggle guarding the ANC’s headquarters, amid more claims that our politics is going through a process of “militarisation”. In Zimbabwe this process ended with “military vets” raiding white-owned farms while being led by a man called Chenjerai “Hitler” Hunzvi.

This is exactly the same strategy followed by Mugabe’s supporters. Every single act against them, every criticism that was made (back when there was still real opposition to his rule) was somehow the act of a former colonial power or mysterious outside forces.

Then we have the lack of division between party and state, and the abuse of state agencies by Zuma, and his supporters, for political reasons. This is not just looting we’re talking about (and boy, could we talk about it) but about tapping the phones of opponents and generally using the security cluster’s top officials to settle political disputes.

And then we have the very idea that Mugabe believes he has some incredible divine right to lead. For now, forever, always. How else do you explain someone who stays in power for so long – he is the only leader most Zimbabweans have ever known.

Zuma, in his less guarded moments, has hinted that he too would quite like to be a dictator. And his behaviour towards women, government money and Parliament could also suggest that he has a certain sense of the divine entitlement about himself.

Put all of this together, and on a less than favourable reading for Zuma you have plenty of the similar ingredients that led to Zimbabwe’s meltdown.

And, my word, it’s the biggest but in our politics.

We are an incredibly different society to Zimbabwe.

First, consider the recent history. In Zimbabwe, political power became less fractured and more centred after 1980. There was a time, just after Mugabe came to power, when he actually faced a strong black-led opposition party. But he was then able to convince the Patriotic Front to merge with Zanu. And they’ve been putting the PF into Zanu-PF ever since. He grew stronger literally from the moment that he took power. And crucially, in those early years, he was able to get away with using the military to conduct massacres of people in Matabeleland, and faced no consequence.

At the same time, it was only Mugabe in charge. No one else. By the time 2000 came around, he’d been in power, personally, for 20 years. If you leave someone in power for that long, by the end of it their son-in-law is going to be the chief of police, and will run the national airline in his spare time.

Now, consider our situation. Since 1994, we have had four presidents (and a fifth if you include those completely forgettable few hours duirng which Ivy Matsepe-Casaburri was acting president between Mbeki and Motlanthe). Each one has done things differently. And it has taken time for each one to gather proper control of the police and the spies and the other necessaries (such as the NPA, the Hawks etc).

And, crucially, political power here has actually fractured, or splintered – the complete opposite of what happened in Zimbabwe. In 2004 the ANC was a single political entity, united almost completely behind Thabo Mbeki. It won 69% of the vote that year. Since then, we have had the splinter of Cope, the semi-split of the EFF, and the rise of the DA (which must surely have taken voters from the ANC over time). And who knows what is going to happen after December this year, but the ANC might well fracture completely.

It is hard to see how this process is ever actually stopped, never mind reversed. And if you don’t have at least complete control of a party that is dominant, it is much harder to stay in power.

There is also a hugely important structural reason why this could happen there, but not here. In Zimbabwe there is a system of geographic constituencies, Parliament is made up of people who represent certain areas. It is pretty easy to weight these in favour of Zanu-PF with the result that while every person has one vote, those votes don’t end up being equal. Here, because of our proportional representation system, each vote, and thus each voter, has exactly the same weight. And that’s before you consider how difficult it is to manipulate our elections process, which has party agents at each step of the way, a working electoral court (although its chair is the uncle of one of Zuma’s children) and people who can predict results before they come out.

To sum all of this up, we are a very different society from Zimbabwe. Bigger for a start, with many more different groups of people. The biggest difference is that we are a proper multiclass society, which means that people vote in different ways, and fight for different things. It is not easy to completely dominate a multiclass society in the way that Mugabe has managed to do for so long. Nothing is really going to change that, even in the medium term.

In these difficult times, it is easy to become hugely despondent. Especially with a leader who sometimes appears to behave more like a potentate than a true democrat. But Zuma is not South Africa. And he never will be. DM