2017 State of the Faction: Where only Might is Right

2017 State of the Faction: Where only Might is Right 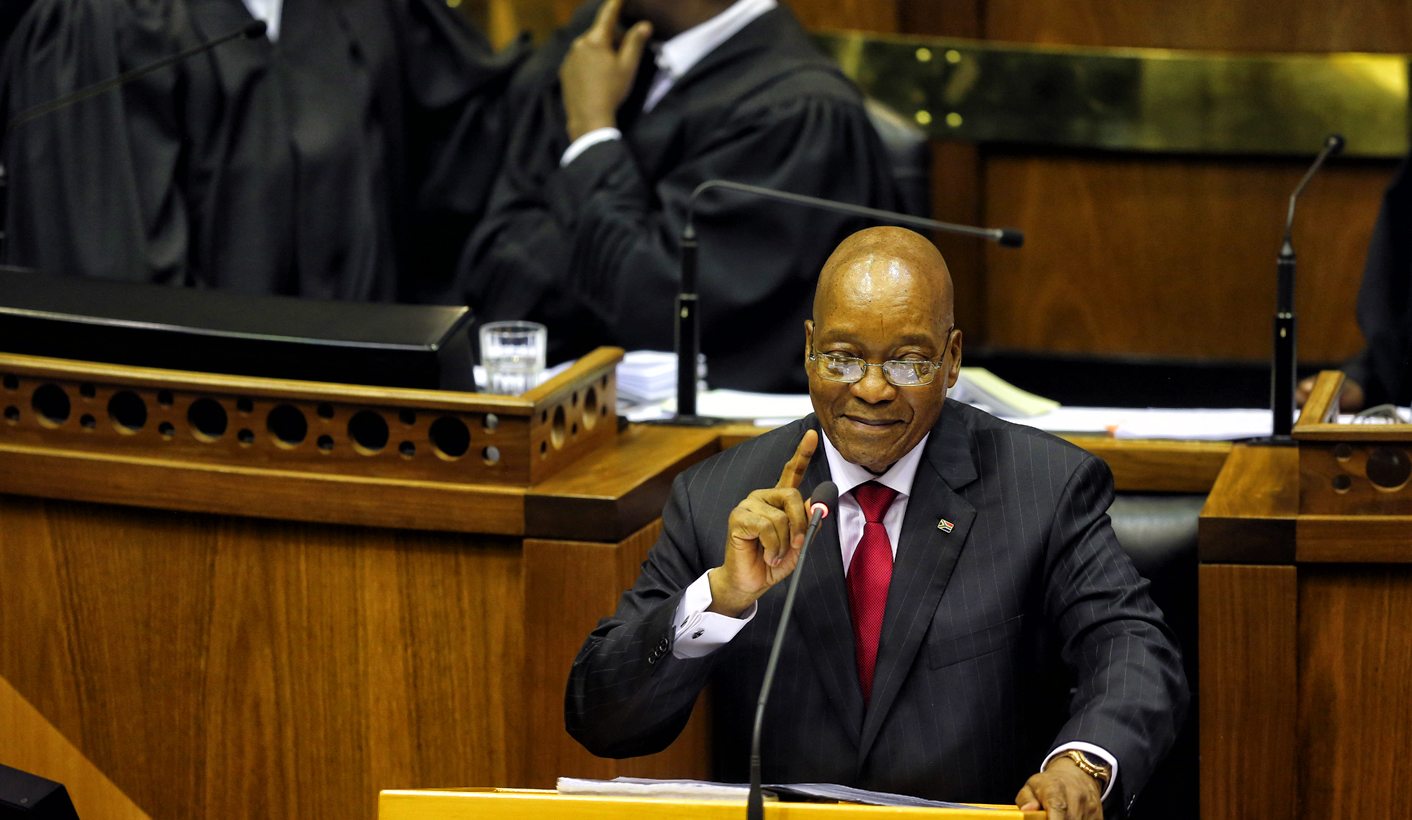 If we were in doubt before Thursday night, we should be in doubt no longer. It is not just that we are led by a “broken man, leading a broken country”, it’s that our politics is broken. We have lost the ability to resolve disputes politically; disagreements that cannot be solved by dialogue or the courts are now resolved through the use of violence. From the promise of a democracy in which all were given space, might is now right. And no one appears to have any solutions on the horizon. Or even to be looking for solutions at all. By STEPHEN GROOTES.

President Jacob Zuma addressed the nation as a factionalist last night. It is surely impossible for him to make the case that he was speaking as the leader of the entire nation, as a unifying figure, when he presides, and appears to chuckle, over the forcible removal of the entire caucus from another party. In the perhaps romantic perception of what a president should be, the fact that the person is a leader is surely an inherent part. It is the real essence of a presidency, the kind of leadership that a person offers.

And yet nowhere on Thursday night was there any attempt by Zuma to act as that kind of figure. He was ensuring that things went his way, that they worked out only for himself. When he spoke, after chuckling, to the almost exclusively ANC chamber, he didn’t appear to care. Surely, as a person who appears to have any pretenses of national leadership, one would be very worried indeed. Worried that there is no answer to the problems that Julius Malema has presented, worried that the country is split on issues like this, worried about the sight of violence in our National Assembly.

Maybe Zuma is worried. In which case, it’s actually worse. Because then he is hiding that worry for purely personal political reasons, to ensure that he looks strong. As a result, he looks indeferent.

What we saw last night was Zuma speaking to the only people he cares about, his constituency within the ANC. And there is no indication at all, whether last night or through any of his other behaviour, that he will ever change.

Take this example. The evening started with the DA asking for a moment’s silence for the 94 people who died in the Esidimeni Life tragedy in Gauteng. Their request was denied, after much to-ing and fro-ing (and ended with the DA holding their own moment of silence. A stunt, but an effective stunt nonetheless. Much later, after the EFF’s red blood had been spilt, Zuma was now in the podium, large and in charge. He had his own points to make over the Esidimeni affair. What would it have cost him to mention the DA at this point. Why did he not? Was he paralysed by his own inability to change a speech on the hoof? Did he just not want to join with the DA, no matter how important their cause? Or, again, did he just not care?

It is surely a mark of the smallness of the man that he did not even attempt to entertain some small smidgen of unity on this issue with people who are otherwise his political opponents.

All of that said, it is, of course, too easy to say that this is all the result of Zuma alone. It is about our dynamics, our structure, and the very make-up of the country’s politics as a whole. It’s been said before that we are seeing the end of the post-1994 political dispensation, the break-up of a politics dominated by apartheid. This means class starts to take some of the space currently occupied by race. And politics based on class is possibly much more difficult to deal with. It’s hard to get different classes to agree, it’s not always possible to predict the wishes of people, or even where people believe their interests lie.

Perhaps more worryingly, there is a chance that some of what is happening is almost inevitable, not despite our Constitution, but because of it. Consider what has happened in our politics since 2009, the year Zuma became President. Cope has disappeared, the EFF has been created, and the DA has grown much stronger. More importantly, the ANC may have started a process that will lead to its eventual break up.

We are beginning to a sort of splintering of our politics, where people fight for small niches, and different classes change their behaviour quickly and with little advance warning. The inequality in our society also sharpens differences in a way that you would not, say, have seen in the US before inequality there rose and gave us Donald Trump. The reason that this could happen, and could lead to some parties being quite successful here, is our system of proportional representation. There is plenty of evidence that proportional representation systems, while probably being fairer than most others, also lead to this kind of splintering. If you’re looking for an example, Italy is a good place to start. When you have many small parties, you have to form coalitions to govern. It’s messy, and difficult.

But this leads us to the other big problem that we have at the moment. Which is that no one really has a mandate to actually govern in the way they would like. On paper, the ANC, with a 62% majority, absolutely has this mandate. But, in reality, it is so divided that no one within it has the mandate that they need. And the result of this is that we are going to have this kind of situation for some time to come.

To solve problems among people who represent different constituencies, you need trust. Without it, there will be no agreement, and often, no discussion at all. Distrust is the ingredient that Zuma has brought into our politics. No one outside the ANC trusts him. And many inside the ANC don’t trust him either. This ingredient is ruining our country, it makes it impossible to find real solutions to our problems; it makes it impossible to even have a proper discussion about our problems.

And it makes it impossible for him to give a State of the Nation Address, without blood being spilt. DM