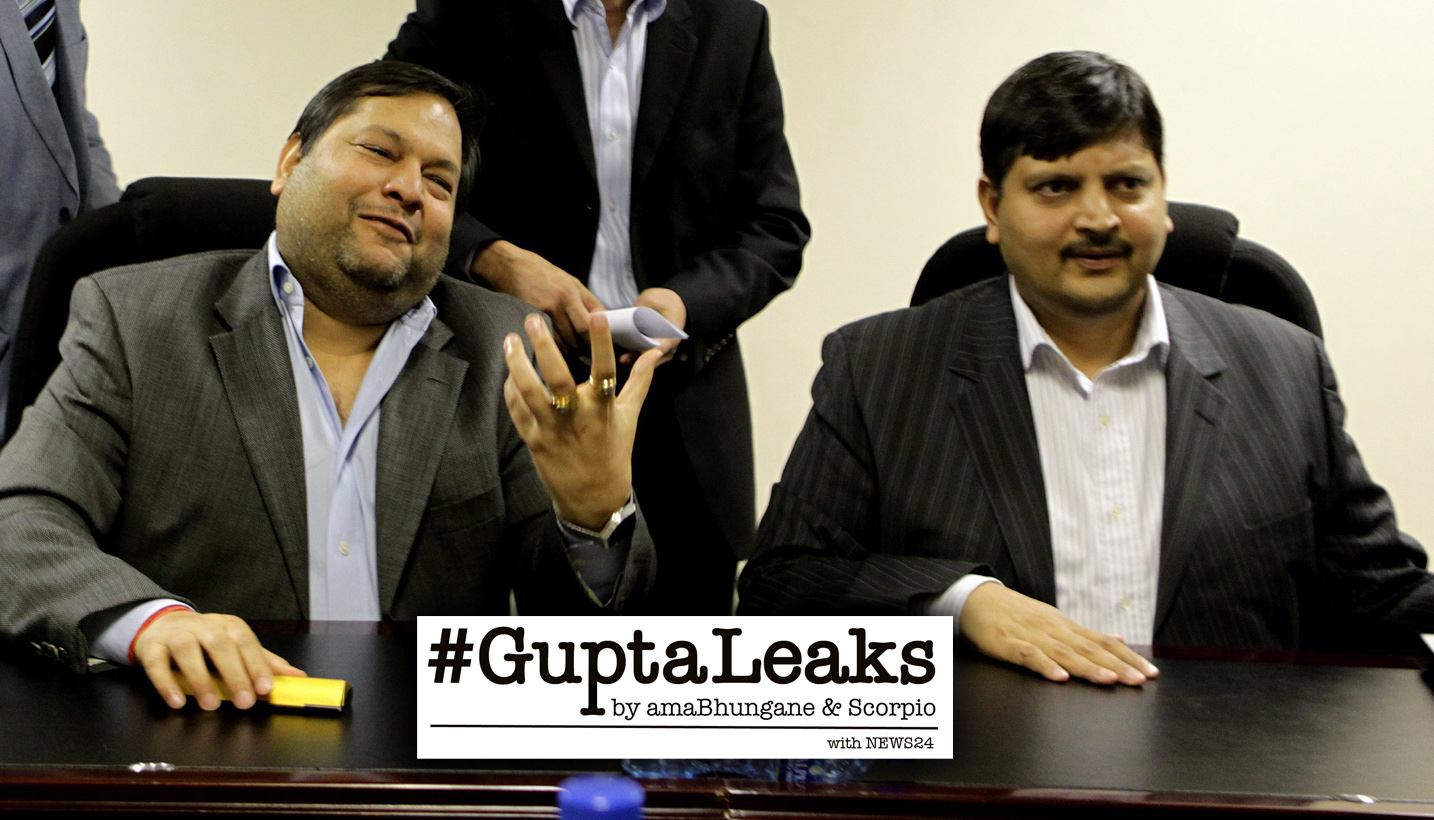 Reports of racism from the Gupta family have surfaced before, notably in the aftermath of the 2013 Sun City wedding when it was alleged that the Guptas insisted on having only white staff fill certain positions. At the time, the Gupta family rejected these allegations “with contempt”. New evidence from leaked emails shows, however, that the claims were entirely true. By SCORPIO and AMABHUNGANE.

The Gupta men like their events to prominently feature attractive women. Planning emails sent before major Gupta functions show that it was standard practice for “hostesses” to be hired from modelling agencies, with the agencies sending through photographs of potential women in advance to be selected or rejected.

“Please see below the profiles of girls that have confirmed availability,” read an email from one such agency in August 2014. “I need to get more white ladies.”

That statement could be read innocently, were it not for the fact that there is some evidence from the leaked emails that the Guptas had a distinct preference for hiring white people in certain areas.

Before the wedding of Vega Gupta at Sun City in 2013, the family made inquiries to hospitality agencies about hiring waiting staff and butlers. In response to a phone conversation with Tony Gupta, an agency called Heilbron Hospitality sent through a quote for staff hire on 22 February, 2013.

Under ‘Terms & Conditions’, it states: “Heilbron Hospitality confirms the provision of all Caucasian staff, with the majority of the waiters and a few of the butlers being female staff.”

Tony Gupta appears not to have read the quote closely, because he replied to the email on the same day: “Please clarify total staff gender and race…”

A Heilbron employee wrote in response: “ALL staff are white! I included this point in the final quote.”

The gender breakdown followed: “Butlers: 8 Male & 3 Female. I would have liked more female but with butlers it is a challenge. Waiters: Majority will be female. I am trying for at least 30 female if not ALL 40 female!”

This response seems to have met with Gupta’s approval, as an agreement was signed shortly afterwards.

It was not just the butlers and waiters at the wedding that the Guptas wanted to be white women, however.

An email from the manager of the Gatsby Spa at Sun City reveals that Sahara CEO Ashu Chawla met with the spa management on 22 April 2013. The email was sent later the same day.

“Thank you for your time this morning, it was certainly interesting,” it begins. “After discussing the matter with my fellow directors we have come to the conclusion that it would be in neither of our best interests to bring in part time white staff for your very important guests.”

The allegations that the Guptas had demanded white staff in certain roles for the wedding surfaced shortly after the event, with City Press reporting that most of the bodyguards and butlers at the wedding were white and Afrikaans-speaking. The newspaper also quoted a resort employee as claiming that black resort staff were made to clean themselves by a Gupta security officer before serving guests.

“The allegations of racism regarding the staff are definitely untrue,” a statement released by the Gupta family in response read. It said it rejected the claims “with the contempt [they] deserve”.

Racial profiling for job vacancies occurred elsewhere within the Gupta empire. An email sent by Tegeta director Ankur Sharma to Chawla in October 2012 states that the mining company needs to recruit a “good office admin” which Sharma specifies should be a “senior old white lady with good experience”.

The Guptas have, of course, employed many black people. But another email, sent by a black Gupta employee in September 2014, claimed that the family treated its black workers especially poorly.

In the email, employee Tshepo Masilo berated the family for the meagre contributions they made to the families of employees who died in their service.

“The Gupta family is very wealthy where you are able to spend more than R100m for a wedding at Sun City and yet you are unable to even give your poor employee who died without even earning a decent salary a good send-off,” Masilo wrote.

“It is very disappointing and hurting to see how you spent a lot of money donating to political parties and hosting events for very high profile figures and rulers of our country and yet you do not take care of your struggling and lowly paid employees especially blacks.”

Last week, News24 reported from the emails that a Sahara employee claimed that Tony Gupta called security guards “monkeys” in a fit of anger at their alleged incompetence. Tellingly, the claim was made to support a letter of complaint about the guards in question: the implication being that the guards’ behaviour was so unacceptable that they had driven Gupta to use the racial epithet.

Defenders of the Guptas such as Black First Land First’s Andile Mngxitama have sought to portray their support as a form of race-based comradeship.

In response to a request for comment earlier this week, Mngxitama wrote: “BLF supports any black person who is under attack from whites.”

It appears, however, that the Guptas may not always feel the same sense of racial solidarity in response.

Gupta lawyer and regular spokesperson Gert van der Merwe has refused to comment on the #GuptaLeaks claims, saying: “I have no documents or context or instructions. It is inappropriate.” DM

The government’s fuel-related levies and taxes are unsustainable