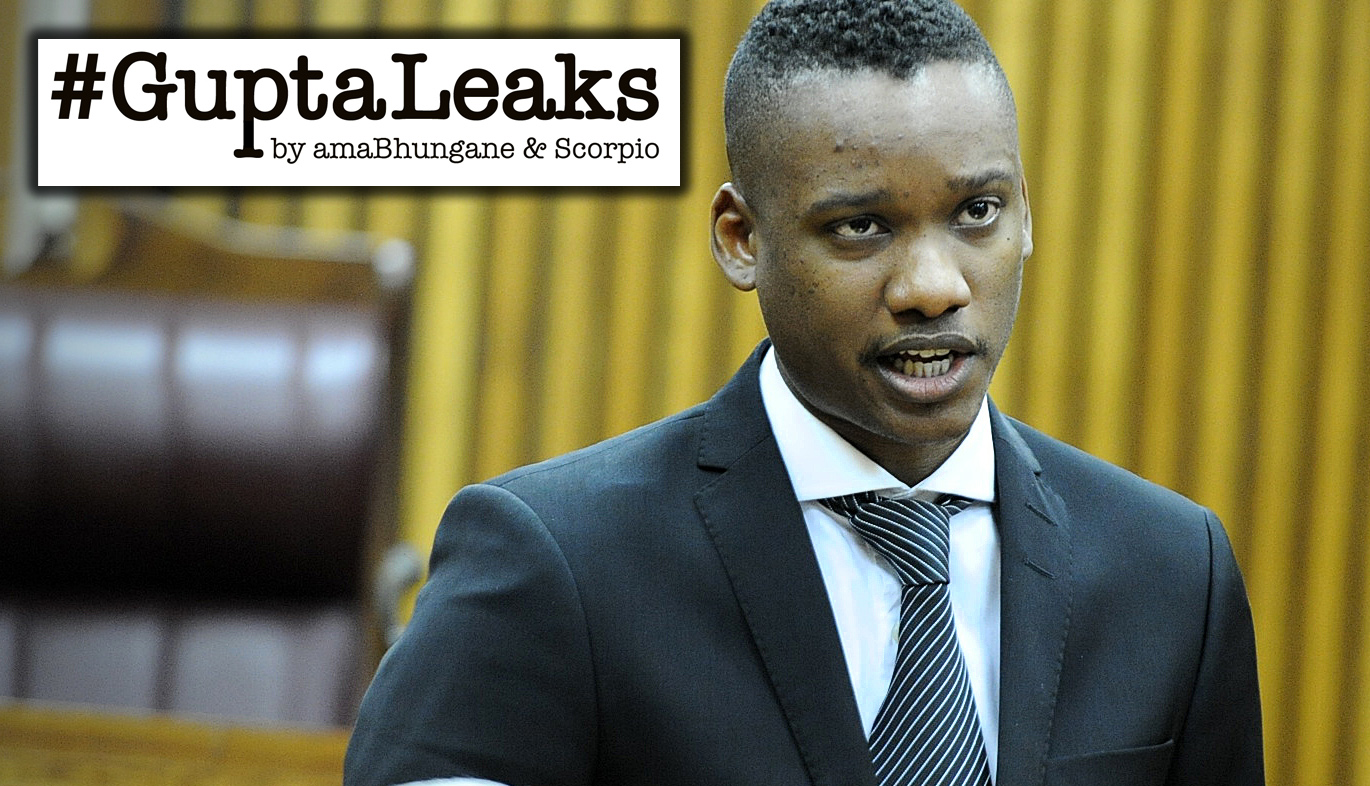 Duduzane Zuma, the 35-year-old son of President Jacob Zuma, emerges from the #GuptaLeaks as kept and captured by the Gupta family, serving as a key channel for influence on official decision-making, including his father’s. By AMABHUNGANE and SCORPIO.

The files suggest that the Guptas took care of his every need, from paying for a Mauritian getaway for him and his then girlfriend in to funding his lavish multimillion-rand marriage to Shanice Stork in April 2015, to setting him up with an R18-million Dubai apartment in the world’s tallest skyscraper, the iconic Burj Khalifa.

The Gupta circle was also privy to some of his most sensitive secrets, with Gupta associate Ashu Chawla seemingly enjoying access to Zuma’s private account, which shows the same ex-girlfriend sending him suggestive pictures just a day after his new wife told him she was pregnant with their first child.

On the night of February 1, 2014, when Zuma lost control of his Porsche on a rain-soaked Johannesburg highway and slammed into the back of a minibus taxi, killing Phumzile Dube, the first person he telephoned was the youngest Gupta brother, Rajesh “Tony” Gupta, the e-mails show.

The #GuptaLeaks also show that when the Sunday Sun approached the Gupta family in April 2015 saying Duduzane had allegedly made another woman pregnant, the Gupta machine was wheeled into action, providing spin from Oakbay chief executive Nazeem Howa. Later, company lawyer Gert van der Merwe provided advice on the terms of a R3.5-million maintenance settlement for the child and his mother.

Meanwhile, Duduzane flew and forwards, usually first class; drove fancy cars bought by Gupta group companies; or was chauffeured by limousine and stayed in five-star hotels, among them the Oberoi in Dubai and the Hotel National in Moscow.

Gupta lackeys took care of tiresome details, like sorting out travel arrangements – or mopping up the demands for some R180,000 in arrears on municipal charges that he had built up on his Saxonwold abode, around the corner from the Gupta compound.

While various company resources were used in meeting Duduzane’s expenses – including his wedding celebrations at Zimbali and Nkandla – it is not impossible that these benefits were offset somewhere within the Gupta group’s labyrinthine accounts.

They also paid him extremely well: In March 2015 he drew R300,000 per month in director fees, more than any other director, including the Gupta brothers.

What was his value to the Guptas that justified this largesse? Glimpses of this role are visible in the #GuptaLeaks.

On 29 June 2015 at 10:54 Duduzane received an e-mail from a secretive intermediary account, [email protected], which the e-mail trove suggests was used as a cut-out for sensitive communication with Gupta agents.

The e-mail was a forwarded message from a little-known Free State official, Richard , who wrote:

A few months later Seleke was appointed to the post of director-general in the national department of public enterprises, which has oversight of SAA, Eskom, Transnet and other strategic state-owned companies.

As has previously been reported, the same pattern was followed with the appointment of Mosebenzi Zwane as mining minister.

On Saturday, August 1, 2015 Tony Gupta forwarded an e-mail to Duduzane attaching the “CV of MJ Zwane”, then a Free State MEC already associated with the Guptas via his championing of their controversial Estina dairy project in Vrede.

Duduzane’s father, President Jacob Zuma, appointed Zwane on September 23, after the incumbent minister, Ngoako Ramatlhodi, became an obstacle to the Gupta campaign to buy the Optimum coal mine.

Ramatlhodi recently revealed that Duduzane had tried to get him to meet the Guptas, but that he resisted their advances.

That is born out by another e-mail, where the chief executive of the Guptas’ JIC mining shares with Duduzane his frustrated efforts to get Ramatlhodi to join an event hosted under JIC mining at the prestigious mining indaba in Cape Town.

We will probably never know if President Zuma signed the draft letters in his name that were sent to his son by senior Gupta employee Ashu Chawla in January 2016, flattering the rulers of the United Arab Emirates and asking for their blessing to make Dubai the Zuma family’s “second home”.

The Zuma name is clearly used to open doors, especially with officials.

On November 16, 2012, Chawla wrote to a Ms Boitumelo at the department of home affairs to try and get work permit waivers, noting:

“As discussed with Mr Duduzane I am forwarding you the detail to get the waiver for 3 employees.”

On 17 February 2015, when the Guptas had an issue with the water at their Vierfontein mine, Duduzane wrote to an Anil Singh at the department of water affairs.

“ Dudu. My team shall attend urgently and revert asap.”

When the Guptas wanted to impress Indian political figures, they also wheeled out Duduzane, promising the new chief minister in their home state of Uttar Pradesh that the “South African president’s office will be represented for the UP CM oath taking ceremony by his son H E Mr Duduzane Zuma”.

In September 2015 the Sunday Times published a pained but polished letter from Duduzane berating the paper for a critical column written by veteran editor Peter Bruce. “Bruce refers to me … almost as if I am a commodity that was traded for favours, claiming that I was ‘enriched’ by the Guptas in order to ‘help’ our president,” Duduzane complains.

The e-mails show that, like so much of the Gupta narrative, the letter was a fake construct, penned largely by Howa, and designed to hide the obvious: a pretty playboy and an ugly truth.

Yes, Mr Zuma, you are a commodity. DM