amaBhungane and Scorpio #Guptaleaks: Bell Pottinger – spinner of a web for ‘pioneers of economic transformation’ 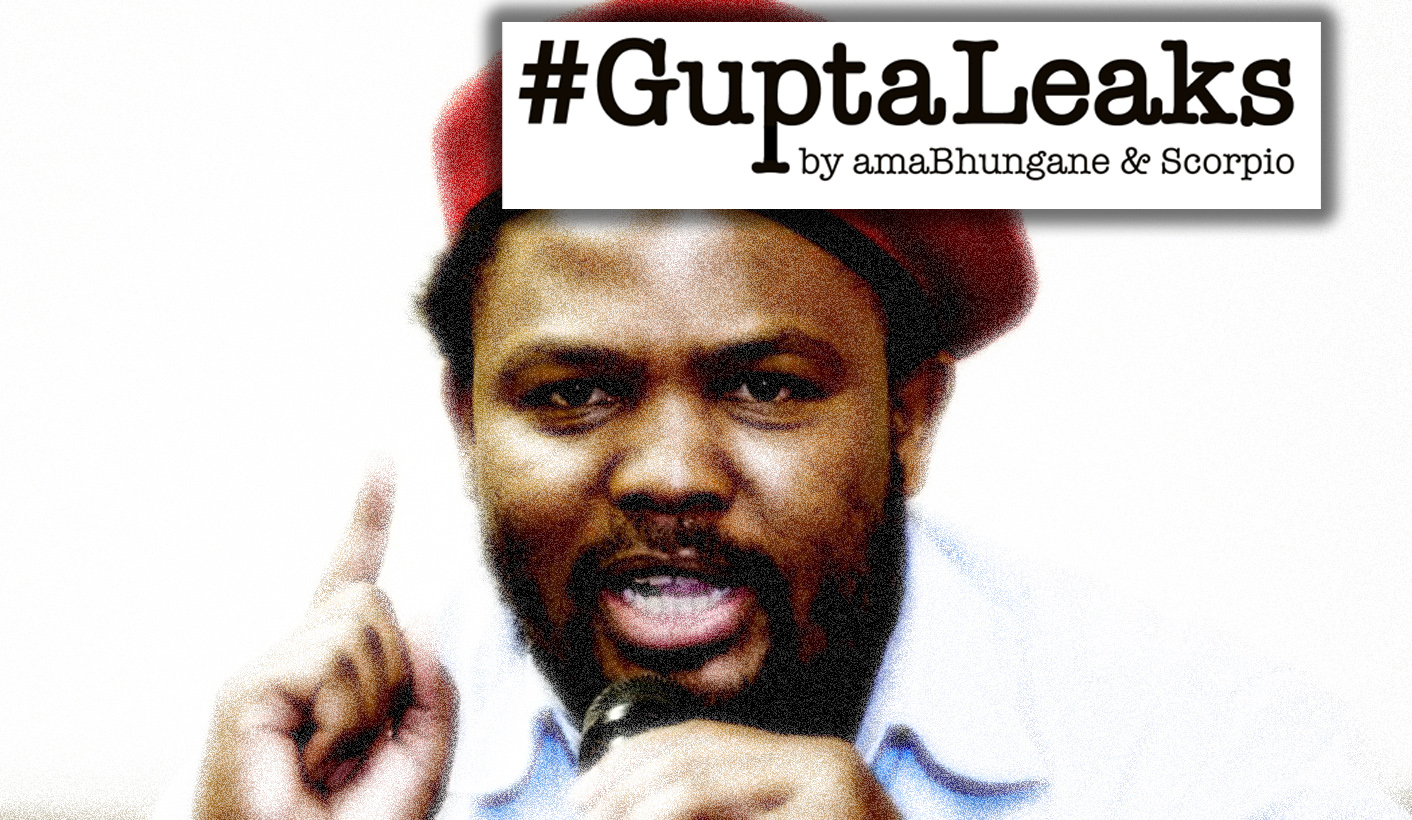 The recent cache of leaked Gupta emails support claims made in an anonymous report earlier this year that controversial PR firm Bell Pottinger attempted to salvage the reputations of the Gupta and Zuma families by portraying them as victims of a racist backlash by “white monopoly capital”. By AMABHUNGANE and SCORPIO.

The report, titled Bell Pottinger Support for the Gupta Family and dated 24 January 2017, was from an unknown source and its reliability could not be established, so it soon slipped off the media radar.

However, the recently-leaked emails back up many of the report’s main allegations.

The report claimed that after signing a £100,000-a-month contract in March 2016 to shore up the Guptas’ reputation, the UK-based firm sought to deflect attention away from the families’ various scandals and involvement in state capture by manufacturing conspiracies and presenting the Guptas as pioneers of economic transformation.

The firm allegedly aimed to shift the public’s focus to other instances of interference in the state by “white capital” – a claim corroborated in the recent email leak.

Email correspondence shows that groups such as the MK Military Veterans Association and ANC Youth League, which have embraced the idea of a racist conspiracy against the Guptas, appear to have received PR assistance from Bell Pottinger in their campaigns to discredit the family’s critics and those of Jacob Zuma.

The two staunchly pro-Zuma organisations have been among the most vociferous in pushing the “white monopoly capital” narrative.

In one email exchange, Bell Pottinger’s financial and corporate head, Victoria Geoghegan, supplies talking points for the ANCYL leader Collen Maine ahead of the League’s national rally on 7 February 2016.

Shortly after the rally then CEO of Gupta-owned Oakbay Investments, Nazeem Howa, forwarded a video of Maine’s speech to the Bell Pottinger team, who appeared pleased with the Youth League leader’s remarks.

One Bell Pottinger employee replied: “Some very interesting remarks by the Youth Leader, and some good messages for us.”

Another wrote: “Am about 10 minutes in and see he has used one one of our statistics… and defended the family… which is good”, contradicting earlier claims by Bell Pottinger that their contract was with Oakbay and not the Gupta family.

In another set of emails from 6 February 2016, Geoghegan circulates a draft MKMVA press statement with additions and edits from Bell Pottinger staff.

The statement defended Gupta-owned Tegeta’s takeover of Glencore’s Optimum coal mine, which was later flagged in the Public Protector’s State of Capture Report.

The following day MKMVA leader Kebby Maphatsoe gave a strident defence of Tegeta and the Guptas, echoing the statement and claiming that the family were being smeared by the media and opposition parties.

About a month later the Bell Pottinger team drafted a strategy for public relations around the Optimum takeover which intended to “move the story on from allegations, to one about our strategy for Oakbay” (which owns Tegeta).

It subsequently emerged that massive political pressure was brought to bear on Glencore to sell the mine to the Guptas. AmaBhungane has previously reported that that state-owned power utility Eskom effectively handed a Gupta company R587-million to help fund the R2.15-billion purchase of Optimum.

The leadership of both the MKMVA and ANCYL are also backers of the Zuma faction’s favoured successor in the race for the ANC presidency, Nkosazana Dlamini-Zuma.

According to the report on Bell Pottinger, shortly after the PR project was agreed to senior Bell Pottinger staff held a meeting with Jacob Zuma “at the behest of the Gupta family”.

At the meeting, Zuma allegedly requested the firm to help create an “advantageous” media environment for his anointed successor’s presidential ambitions.

The president is also said to have asked the firm to help manage the reputation of his son Duduzane, a business partner of the Guptas who is a non-executive director of one of the family’s companies, Shiva Uranium.

According to the report, a former partner at the firm alleged that: “Zuma said ‘there is one extra thing I would like done – the boy needs help with his reputation. Please do what you can to give him some help’. By the boy, it was clear Zuma was referring to his son, Duduzane.”

The email correspondence, however, suggest that Duduzane played a more central role in recruiting the firm.

In a 19 January email addressed to Duduzane, the month before the alleged meeting with his father, Geoghegan begins: “It was a great pleasure to meet you in Johannesburg over the last couple of days – many thanks for sparing us so much time.”

Her email contains a briefing note outlining an initial project and the £100,000-a-month fee, excluding costs such as travel and accommodation.

The correspondence between the two sheds light on an attempt to appropriate the rhetoric of “economic emancipation” and turn it into a clear, consistently repeated political message to advance the interests of the firm’s clients.

In an enthusiastic reply to Geoghegen, Duduzane requests assistance “whether it be in the designing and creating a hard hitting message along the lines of the #EconomicEmancipation or whatever it is”.

He then forwards the email conversation to Gupta brother Tony.

In the months after the contract with Bell Pottinger was signed, as Zuma and the Guptas faced increasing public scrutiny, an apparent online campaign gained momentum.

According to the report and numerous articles, an army of fake Twitter bots was mobilised to turn public opinion against critics of the Guptas and those perceived to be hostile to their interests, such as then Finance Minister Pravin Gordhan and his deputy at the time, Mcebisi Jonas, and former Public Protector Thuli Madonsela.

AmaBhungane has reported that numerous Gupta-aligned websites sprung up at around the same time. Their routine attacks on critics of the family and the Zuma faction as “agents of white monopoly capital” were amplified by the Twitter bots.

Several of the websites were also traced to a Gupta employee.

A key figure in this online community is Andile Mngxitama, whose organisation Black First, Land First (BLF) has repeatedly come to the defence of Zuma and the Guptas.

The Bell Pottinger report specifically fingered BLF as a foundation that the firm backed in its Gupta PR campaign – a claim denied by Mngxitama at the time.

But it has now emerged in leaked emails from February 16 that Mngxitama went cap in hand to Oakbay’s Howa.

An email from Mngxitama to Howa refers to an earlier meeting between the two. Later that evening Howa writes to Atul Gupta saying: “I met with this fellow. He wrote a good piece about us in the Sunday Indy this past weekend. He wants funding for his organisation. I explained that as business people, we have taken conscious decision to stay out of politics.”

Atul then forwards the email to Tony Gupta without a response.

It is unclear what the final outcome was but the BLF continue to be among the most devoted Gupta supporters, recently mobilising counterdemonstrations against anti-Zuma protesters outside the Guptas’ Saxonwold residence.

According to the report, a former Bell Pottinger partner claimed that the social media campaign was ultimately a failure.

Indeed the Gupta campaign caused major rifts within Bell Pottinger after other major clients – Investec and Richemont, of which billionaire Johann Rupert is chair – cut ties with the firm, reportedly because of its work with the Guptas and the targeting of Rupert as a symbol of “white monopoly capital”.

According to one former Bell Pottinger source, Geoghegan tried to “pull the Gupta account her way” and was determined not to let go of the Gupta campaign despite others wanting to can it.

This eventually led to a number of senior members splitting to form a new company.

In April of this year, in the face of growing public criticism, Bell Pottinger announced it was terminating its work with the Guptas. DM