Op-Ed: Why I support the ‘National Dialogue’ 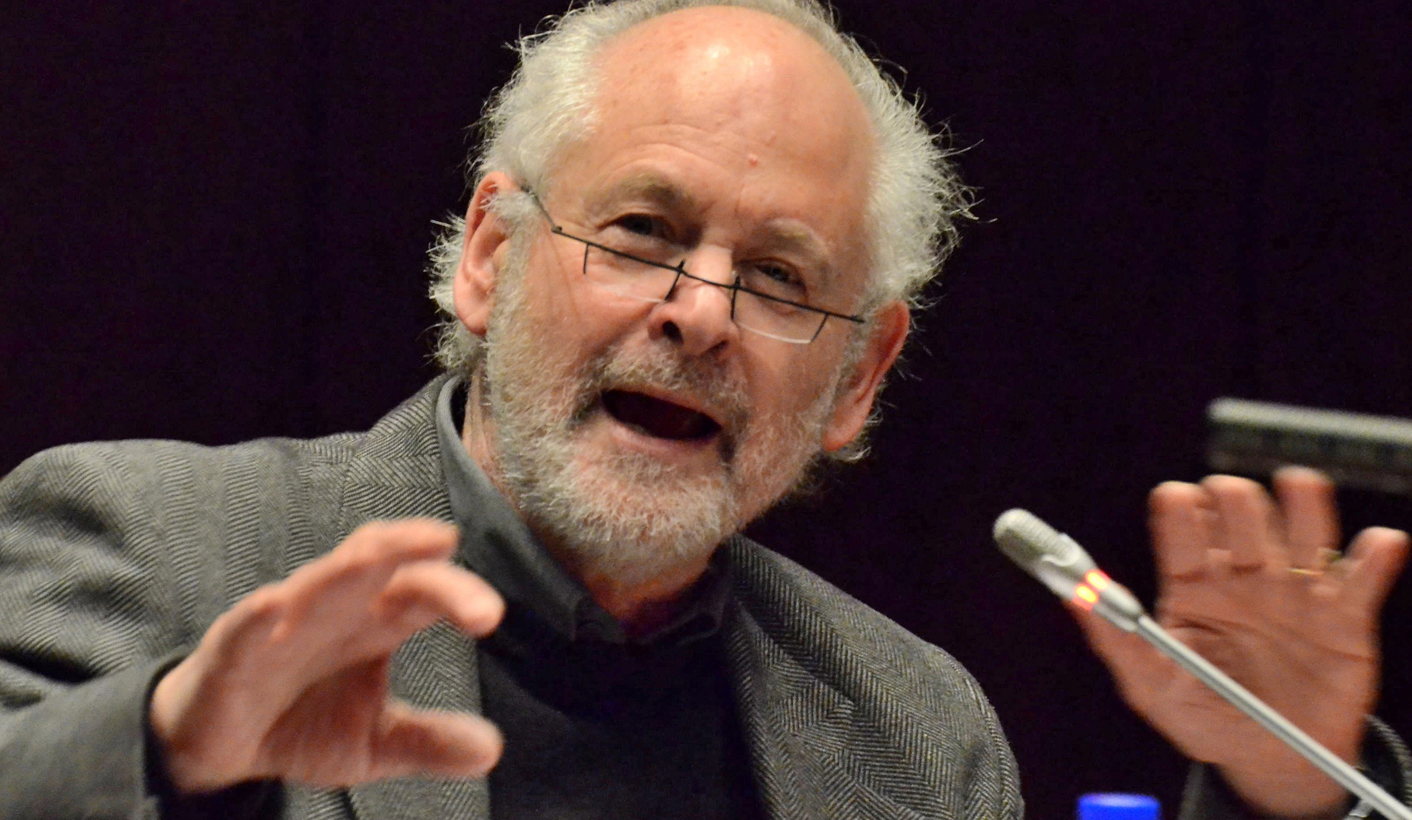 During the last week a number of foundations, named after heroic figures in the liberation struggle have come together with former presidents Thabo Mbeki, Kgalema Motlanthe and FW de Klerk to initiate a national dialogue, to address the crisis that engulfs South Africa. The aim is to initiate a range of discussions and have ordinary citizens voice their concerns and aspirations. The initiative is controversial, partly because of the presence of De Klerk. It may nevertheless be an important vehicle for building a consensus over the shape of a post-Zuma era. By RAYMOND SUTTNER.

Many people recognise that South Africa has experienced a multi-faceted crisis for some years. One of the reasons for the nationwide protests calling for President Jacob Zuma to step down is a feeling that many people have that not only Zuma but also most institutions of state have failed them. They sense that no remedy can be expected from most of these institutions. The trust bestowed on their representatives has been betrayed in countless ways –over Marikana, Nkandla, the social grants crisis and the repeated misuse of public monies through state officials and state owned entities.

It would be a mistake to believe that people do not understand that it is not a problem of one individual alone, significant and disastrous as the Zuma presidency has been. They know that his comrades in leadership and Parliament spent many years defending his wrongdoing. The people of this country have no reason to hand out blank cheques to anyone.

The presence of so many people protesting in the streets, booing at public events and in other ways, is a sense that people want to wield their own power directly at this point in time in order to remedy what has gone wrong. What has happened until now in public protest has been remarkable but it can only be sustainable as a vehicle for change if it is part of a strategy and comprises a vision that is embraced by wide sections of society.

What happens beyond the removal or departure of Zuma needs to be articulated within the framework of a vision behind which people are mobilised and organised. There needs to be a vision in order to strengthen accountability. But the people must also be present in order to avoid a return to the “passive observer” status of citizens that has been one of the weaknesses of post-apartheid South African democracy, not only in the Zuma period. Their role has been to periodically cast their votes and otherwise to simply observe politics. It is important that we revisit the scope of what constitutes our democracy in order to ensure an active citizenry, a people organised in a range of ways: in their communities, work places, professions, faith based communities, in business, as students, women and teachers, amongst other sectors in order to raise problematic features persisting in various aspects of their lives.

In building a vision and an organisational framework for realising it, we could work with “purist” ideas and unite a small group regarded as or self-styled as a vanguard or revolutionary organisation. Such a grouping, relatively large or small could advance ideas that they believe are necessary but by definition exclude the power of numbers of those who may not accept or wholly accept such a purist approach.

Those who do not wish to be absorbed into this “vanguard” and those unwilling to compromise may nevertheless share unhappiness with the present conditions. They may want a return to legality, end of corruption and reducing or ending inequality, albeit with many differences of viewpoint on how and how far to move on such issues.

The National Dialogue, advanced last week by former presidents and national foundations, named after heroic figures in South African liberation history could become a vehicle for advancing goals and winning people over, from wherever they may be located. There are no short cuts, like damning the constitution, when it has been repeatedly demonstrated that it is not the constitutional negotiations or the constitution itself that has prevented land distribution but lack of political will. (See former Deputy Chief Justice Dikgang Moseneke and former Constitutional Court Judge Albie Sachs.) If that is the case, for those who want land redistribution or other steps, including nationalisation, which may advance social transformation, rhetoric around compromises cannot substitute for popularising and organising around claims, to build the support to win demands, in order to create the necessary “political will”.

Some of the greatest revolutionaries were that not only because they took up arms or fought the enemy of the oppressed, but also that they recognised when there was a change of terrain, when there was an opportunity for peaceful resolution of conflicts and achieving goals. They then struggled equally hard to make that peace work. That was true of Vladimir Ilyich Lenin and that was also true of Nelson Mandela, both willing to be insurrectionists when required. But both recognised when it was necessary to change approaches and build what could be achieved without further warfare, whose effects were experienced most harshly by the poorest sections of the population.

No revolutionary can operate with a notion of “no compromise” for the best way of advancing a long-term goal may necessitate compromise at any particular moment. Whether or not the compromise is necessary must be assessed on the basis of the ethical and strategic principles that may well equally motivate continuation of war or other apparently more militant approaches. Sometimes one has to take a number of routes to reach a goal. Thus, in his Life of Galileo, Bertolt Brecht quotes Galileo as saying: “If there are obstacles the shortest line between two points may well be a crooked line.”

There are many people who may be cynical about this “National Dialogue” initiative. The presence of FW de Klerk, the last apartheid president will anger many and already the EFF have voiced their –possibly qualified- rejection of the initiative primarily in relation to the presence of De Klerk.

Some will depict the presence of Thabo Mbeki as bitterness at his ousting, which saw the rise of Zuma to the Presidency and Kgalema Motlanthe may also be depicted as motivated by resentment since he was defeated when contesting the ANC presidency with Zuma in 2012. When one leaves the presidency one obviously has to handle one’s public interventions with care because one does not want what one says to be interpreted as attempts at “back seat driving” or to “rule from the grave” or continuing resentment at loss of power. For that reason, we know that Mbeki and Motlanthe have been very cautious in making public statements. It is only in the last year or two that they have entered into public debate and criticised what is happening under the leadership of Zuma or discussed the potential options of MPs in the forthcoming parliamentary vote of no confidence in President Zuma.

They have done this with dignity and without entering into discussions over who should contest any position in the ANC or government. They have spoken on the basis of what they see as their responsibility to the country at large. They also see this as compatible with their loyalty to the ANC.

I support this initiative. That does not mean that I see it as a static platform whose permutations, potential shape and direction have been finally decided by those who have initiated the dialogue. In the dialogues themselves it will be necessary to constantly advance a range of options that may enable the initiative itself to be broadened and deepened in accordance with the aspirations of the people of South Africa.

Certainly, this initiative may be seen as elite-driven. But it is up to other constituencies to grasp the opportunity to make this a truly national initiative by advancing and inserting their general and specific demands as part of an ongoing process aimed at defining the future. They will also need to insist that the constituencies from which these demands derive are themselves physically present and that the notion of listening in the dialogue is in fact realised. DM

Raymond Suttner is a scholar and political analyst. Currently he is a Part-time Professor attached to Rhodes University and an Emeritus Professor at Unisa. He served lengthy periods in prison and house arrest for underground and public anti-apartheid activities. His prison memoir Inside Apartheid’s prison will be reissued with a new introduction covering his more recent “life outside the ANC” and will be published by Jacana Media late in May. He blogs at raymondsuttner.com and his twitter handle is @raymondsuttner