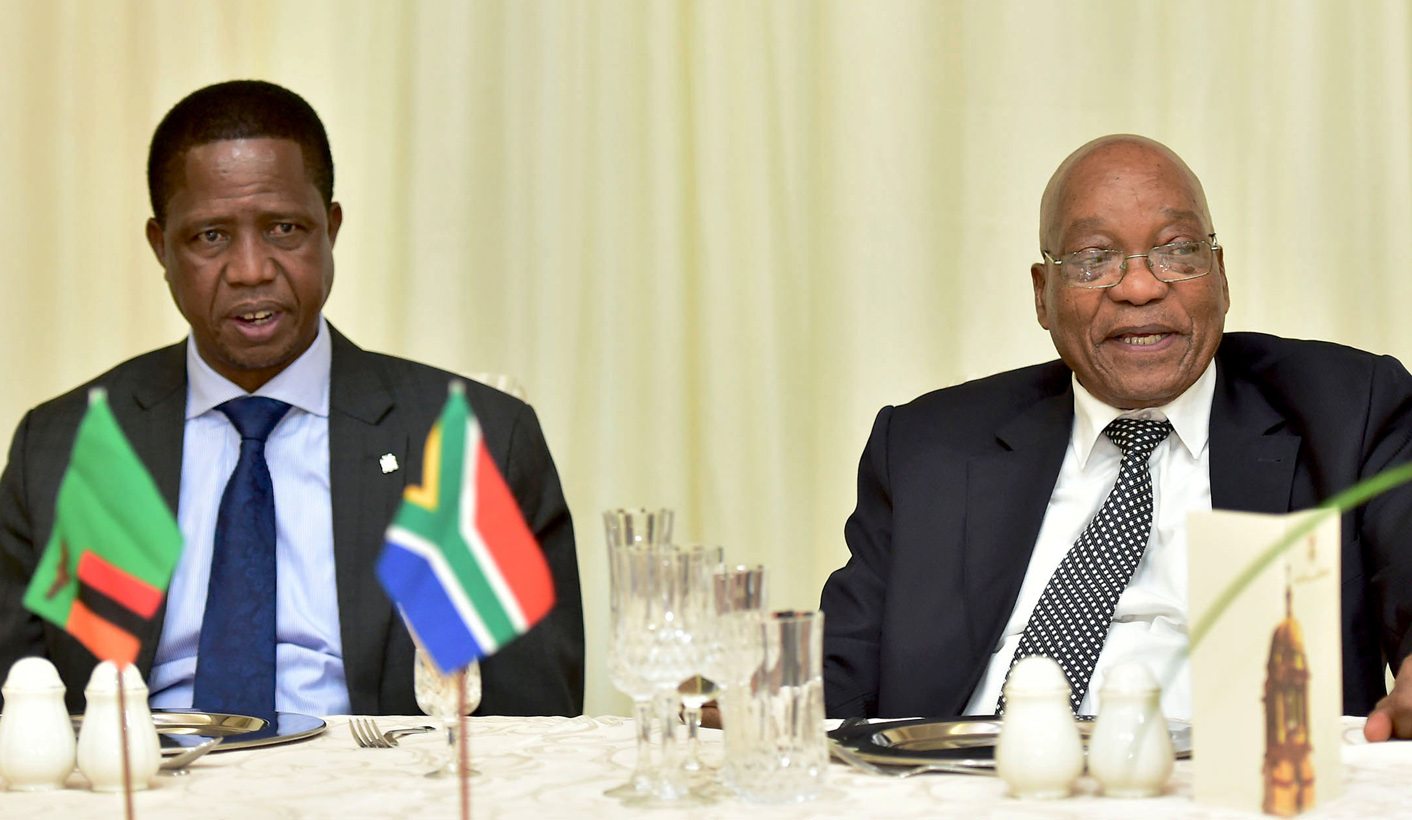 After the attack on the home of Zambia’s opposition leader, and then his arrest on spurious charges, Zambia’s reputation as a beacon of democracy in Africa is under serious threat. By SIMON ALLISON.

Hakainde Hichilema is famously suspicious. The Zambian opposition leader travels with a phalanx of bodyguards, and often brings his own food wherever he goes, just in case anyone wants to poison him. He claims to have received repeated death threats. He has a safe room installed in his house.

Until Tuesday last week, it was easy to dismiss Hichilema’s paranoia as exactly that – paranoia. This is Zambia, after all, one of Africa’s most established and most successful democracies. No one bumps off opposition leaders in Zambia. It’s not Russia, or Venezuela, or Tunisia.

And then, in the early hours of that Tuesday morning, everything changed. For Hichilema, and for Zambia.

Dozens of armed police descended onto Hichilema’s property. They broke down the door. They threw tear gas into the house. Dazed and confused, and above all scared, the politician and his family retreated into the safe room.

I spoke to him there, on the phone. He didn’t raise his voice above a whisper, and it trembled as he talked. He said that his wife and children were injured from the tear gas, which was periodically pumped through the vents of the safe room in a bid to force them out, and that his servants had been tortured. He said he could hear their screams. “This guy is trying to kill me,” he said. “This guy is a dictator, a full-blown dictator.”

He was talking, of course, about President Edgar Lungu.

The siege lasted until mid-morning. By then, Hichilema’s legal team had arrived, as had journalists. His lawyers eventually coaxed Hichilema out of the safe room. He was immediately arrested, and charged shortly afterwards with treason.

No one is dismissing Hichilema’s paranoia now – and no one is quite sure what would have happened in the absence of that safe room into which he could retreat.

What we do know is that Hichilema’s arch-rival, Lungu, has now abandoned all democratic niceties in a bid to consolidate his grip on power.

It was the nature of Hichilema’s arrest that was most concerning: the midnight raid, the tear gas, the casual brutality meted out to the servants. It was all entirely unnecessary. Hichilema is a public figure, and could have been quietly arrested at any time. But the raid was designed to intimidate, to send an unmistakeable message to the president’s opponents that Lungu’s authority shall no longer be challenged.

It wasn’t just Hichilema, either. Chilufya Tayali, head of the Economic and Equity Party and a vocal critic of President Lungu, was arrested just two days later. His crime? A Facebook post in which he criticised the “inefficiency” of Zambia’s police chief. He has subsequently been released on bail.

If that sounds ridiculous – well, it is. But not as ridiculous as the charges levelled against Hichilema, which are so far entirely unsubstantiated by evidence or detail. The only concrete allegation is that Hichilema endangered the president’s life when his vehicles did not give way to the president’s motorcade at a cultural festival.

In Lungu’s Zambia, a traffic incident has somehow become treason.

It’s not Lungu’s Zambia quite yet, however, as embarrassed government prosecutors learned in court. In their submissions against Hichilema, prosecutors made a Freudian slip, referring to the opposition leader’s alleged offences against the “Government of President Edgar Lungu”. They were forced to amend the charge sheet when the defence observed that such an institution does not exist: there is still only a Government of the Republic of Zambia, as much as President Lungu might like it to be otherwise.

But make no mistake: these are dark, dangerous times for Zambia. And if Lungu’s end goal really is to dismantle the country’s hard-won democracy, then it’s hard to see who or what will stop him.

Domestically, the arrests of Hichilema and Tayali, along with a sustained assault on independent media, will have a chilling effect on civil society. It will take extraordinary courage and commitment to take on President Lungu’s administration now.

Internationally too, Lungu faces remarkably little pressure. He has already brushed off statements of concern from the United States and the European Union, warning diplomats that they are “wasting their time”; just as he brushed off concerns that his 2016 election win was marred by serious electoral fraud.

South Africa, the regional superpower which does exert real influence in Lusaka, has been deafeningly silent; as analyst Greg Mills observed on these pages, it can’t be a coincidence that Lungu may well have been encouraged down this path by the example of the “patronage regime” emerging in South Africa. The less leadership South Africa displays at home, the less it can project abroad.

Zambia’s in trouble. For so long a beacon of democracy in Africa, its enviable reputation has already been tarnished by President Lungu’s actions. The risk now is that Lungu undoes that democratic progress entirely.

If this all sounds a little paranoid, just remember that Hakainde Hichilema was paranoid too. And on this, he is being proved right. DM

Photo: President Jacob Zuma with the President of Zambia Edgar Lungu at a press conference at the Union Buildings following the State Visit, 8 December 2016. (Photos GCIS)