No child left behind thanks to Siyakwazi, a community-based programme in KZN 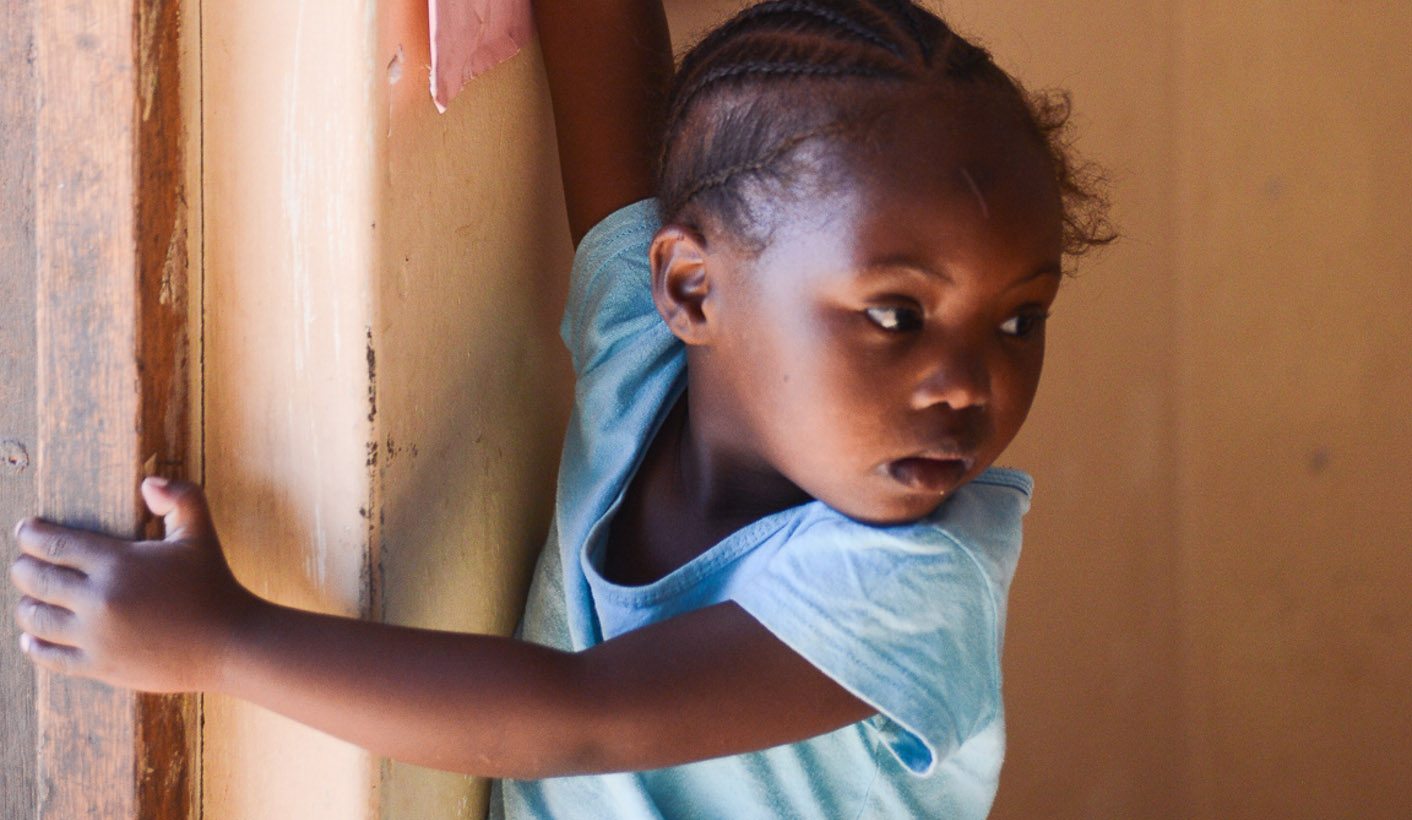 South Africa has a bad reputation for the support – or lack thereof – given to children living with disabilities. But sometimes good news comes in unexpected places. In one small coastal district of KwaZulu-Natal, a group of children are showing what can be done with a little help. By MARELISE VAN DER MERWE.

Unathi Jula is five. She loves early mornings, the colour pink, showing the weather at school, telling you the days of the week and months of the year. She doesn’t like it if you take her things when she’s playing or without her permission. Specialities include singing, skipping rope, counting and rhymes. Her favourite gospel song is Ngcwele Somandla. Asked what she likes learning best, the response is decisive: drawing and painting.

“I love to go to school to play with the other children,” she says. “I am very happy to see a lot of children.” Her BFFs are Enhle at school and Aphelele at home.

This happy, confident and assertive child has transitioned to her local primary school after a successful period at a nearby Early Childhood Development (ECD) centre. The one thing that might surprise you about her is that she also has Down’s syndrome. Previously, she battled with aggression due to difficulty in speaking; she was frustrated at being unable to articulate her feelings. Her mother, at one stage, wondered if she would ever get out of nappies at night.

“I can tell she is very happy,” her mother says now. “I am happy too.”

Unathi was one of the beneficiaries of Siyakwazi, a community-based programme that focuses on giving support to children under the age of seven in the Ugu district in KwaZulu-Natal. Siyakwazi’s mission is simple: give children what they need to function at their full potential, regardless of whether they have a disability, learning difficulty or any other challenge, and start as early as possible so as to maximise the benefits. In 2016, of the 158 children with disabilities or barriers to learning on the programme, 56 successfully reached Grade R readiness.

The programme works on two main principles. First, start early. And second, prioritise inclusivity. Launched in 2013, it involves partnerships with crèches, schools, parents, and therapists to identify and support students with special needs, as well as supporting educators to best assist all the students in their classes. This is done through a multi-pronged approach. Home visits are carried out where necessary, and caregivers are supported in their mother tongue and helped to stimulate the child and encourage their gross and fine motor skills development. In crèches and primary schools, teaching assistants are deployed to help and train teachers so that they can best support the children in their care. Individual programmes are developed for children with special needs and given to their teachers. Parents are also taken through the programmes, so that they can keep in touch with the teachers on their child’s progress.

“Promotion of inclusive activities early in a child’s life enhances learning and ensures greater success in later developmental stages,” explains Cathy Mather-Pike, founder and director of Siyakwazi. In short, the first thousand days are important for any child. But they are absolutely critical for a child with a disability or barrier to learning. It is widely accepted that early intervention greatly improves the outcomes for children with both intellectual and physical disabilities. Neural circuits are significantly more “plastic” in the first three years of life, which means brain development is best optimised early. Moreover, this development is improved by positive early experiences and early intervention has been shown to positively influence a child’s developmental trajectory. Unfortunately, however, early diagnosis and intervention for South African children with disabilities is hit-and-miss at best.

Inclusion of children with disabilities in ECD services is legislated by government, but is still in the process of becoming a reality in many communities, points out Mather-Pike. “We believe our work is the development of an example of good practice, including inclusive practices, support and collaboration with other stakeholders,” she says. Wits Professor Haroon Saloojee, among others, has argued that intergenerational disadvantages may cause differences at birth and that these differences are likely to widen over time, unless there are specific intervention to address them. Early childhood is recognised as a unique window of opportunity to narrow this difference.

In theory, all the right systems are in place, says Sue Philpott, disability activist and senior researcher at the Disability Action Research Team (DART). Provision is made for all children to receive a Road to Health booklet which records their developmental milestones. This is intended to assist early diagnosis of illness, or any disability or barrier to learning, says Philpott. The problem is that staff shortages, overcrowding, inadequate training and parts of the booklet that may simply be unclear all contribute to a situation where only the most crucial life-or-death indicators are usually filled in. “There is potential in the booklet, but it is unrealised,” she says. “For the most part, where it is filled in, it is focused on survival. Is the baby gaining weight, for instance?” Moreover, says Philpott, for example very rural areas, even where the booklet is filled in in exemplary fashion, referral facilities may simply not be available.

The Ugu district, where Siyakwazi operates, comes with a recognisable set of hurdles. “Among the key challenges affecting young children are inadequate and inequitable coverage of key childhood programmes, under-provided services, including child care and early learning, parenting support and exclusion of vulnerable children, particularly the youngest, poorest and those with disabilities,” says Mather-Pike. “Children with disabilities are often found at home, unstimulated and hidden away due to lack of disability awareness.

“This is exacerbated by poor quality linked to lack of funding and poor qualifications of staff. As a result, children with disabilities in classes in rural schools and ECD centres are noticeably behind in many areas of their development, namely physical development, cognitive development, early literacy and numeracy concepts and emotional and social development, when compared with the development stages according to age. As a result, many of these children struggle later with formal schooling and drop out or are referred to a special school.”

The “special school” is in itself an imperfect solution. There is a shortage of schools equipped for children with special needs, but even where these are available, children with vastly different needs may end up in the same classroom.  Moreover, such schools can be prohibitively expensive and more difficult to access than the nearest public school.

Of the 900,000-odd children in South Africa living with disabilities, up to 600,000 were not in school, the report noted. This is due to a combination of factors: many schools are already strapped for resources and, despite their legal obligations, some simply turn children away due to their disabilities. Others may accept the child, but a lack of inclusivity within the school, a lack of support, or other difficulties such as difficulty with transport may cause the child to drop out.

For all these reasons, activists and researchers increasingly argue that it is more productive to build a culture of inclusivity. “When marginalised children are included, all children benefit,” says Philpott.

Again, the trouble lies in the gap between policy and implementation. According to Philpott, there’s a silo effect that is hampering efforts at cohesive intervention. “There’s a need for information from different sources, a complete situational analysis,” she says. “Different sectors need to work together.” Further, she adds, there must be greater co-operation at ground level. Often, children living with disabilities are met with a hostile environment, where their disabilities are viewed with shame, believed to be a curse, or the children themselves are hidden or vulnerable to abuse and neglect. Community service therapists are a great help to many families, says Philpott, but there are also practical difficulties. Often therapists have little or no experience, or there are language barriers.

The benefits of increasing the access to mainstream education are manifold, argue Philpott and Mather-Pike. As well as maximising the potential of the child, it also injects much-needed social support for the whole household. All children can learn, and all children should be taught, says Mather-Pike. A more flexible, child-centred approach to education is more beneficial overall, adds Philpott. When it comes to education, one size does not fit all. “One does not change the child but the environment,” she explains. “An inflexible curriculum is disabling. It’s not just about moving a few learners.”

For children like Unathi, and their families, the shift in perspective towards inclusivity is life-changing.  Her mother, who says she’s glad to help raise awareness of the needs of children with disabilities, says when she first learnt of Unathi’s diagnosis, she felt “very bad”. “Just confused, with a lot of questions in my head, like: how am I going to raise such a child?” She reiterates the challenges faced by many other children: a life hidden away, with parents afraid or unwilling to ask for help; a lack of access to facilities. For Unathi, she says, every victory was hard-won.

Today, teacher’s assistant (or Siyasiza) Nontuthuko Ngeleka says there is no turning back, for Unathi or her classmates. “Every day I go to a different ECD centre to support all the children there,” she says. “I support teachers with inclusive practices, to see the children grow and develop. Doing this at an early age builds a concrete foundation.

“Everyone can learn and be given a chance. No one has to be neglected,” she says. “Everyone is important.” DM

Photo:Unathi Jula was one of the beneficiaries of Siyakwazi, a community-based programme that focuses on giving support to children under the age of seven in the Ugu district in KwaZulu-Natal.

Wheel-life solution: How Covid-19 made Khayelitsha woman rethink what makes a space public

‘Blacklisted’ and starving in Tolwe: Farmworkers in limbo as hostilities with employers intensify