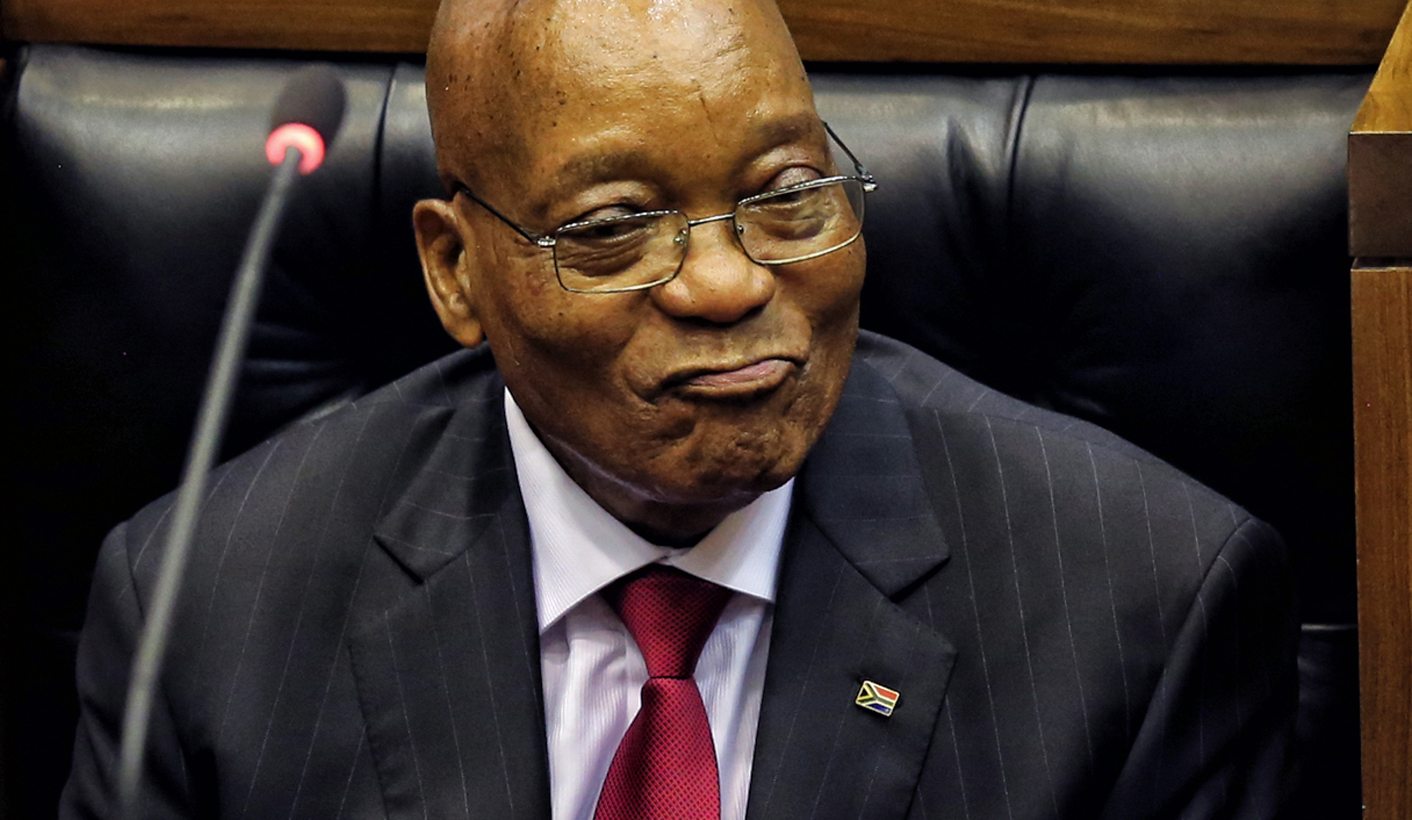 Donald Trump has his “deplorables” and so does Jacob Zuma. While Trump’s troops might extend over millions of people, President Zuma has a select few villains who are essential to his wrecking ball machinery. Social Development Minister Bathabile Dlamini is a champion of the deplorables, and despite pushing the country to the brink on the social grants crisis, Zuma still has her back. Like Hlaudi Motsoeneng, Dudu Myeni, Brian Molefe, Faith Muthambi and Mosebenzi Zwane, Dlamini has high-level political protection and will be ready to yank out the “small-nyana skeletons” of her detractors in order to survive. By RANJENI MUNUSAMY.

On the campaign trail in September last year, Democratic presidential candidate Hillary Clinton suggested that half of her opponent’s supporters were a “basket of deplorables” who were racist, sexist, homophobic, Islamophobic and/or xenophobic. Donald Trump’s supporters embraced the moniker and “Deplorables” became a novel addition to his campaign branding. All over America, t-shirts, caps, badges and posters were produced proclaiming Trump supporters as “deplorables” – with even a line of campaign merchandise for children with the slogan “adorable deplorable”.

By embracing the title, Trump supporters affirmed their prejudice, believing it was essential to “Make America Great Again”. Thus, Trump’s plan for a “great wall” on the Mexican border and his Muslim ban responds to the mandate of his constituency of deplorables.

President Jacob Zuma has his own gallery of deplorables, determined to make South Africa awful again. As anxiety grows in the country about how the South African Social Security Agency (SASSA) will legally distribute social grants in April, Zuma spoke out on the matter from Indonesia.

“I would suggest that the nation should really calm down and wait for the date. Others are calling, for example, for the dismissal of the minister, but the date has not come. How do you judge a person before the event? I think it is somewhat worrying that people seem to be having preconceived ideas on the matter,” Zuma said.

The president apparently believes that when the grants are distributed on April 1, the crisis would have passed. The fact that grants were being distributed all this while through an illegal contract, that Dlamini ignored all the warnings to set up an alternate system, and that she pushed the country towards a catastrophe of epic proportions seems not to worry Zuma. Her arrogance and ineptitude continues to be revealed through her inability to answer questions about the cost of a new contract with Cash Paymaster Systems (CPS) and dithering over her response to the Constitutional Court.

But Zuma believes it is premature to “judge” Dlamini and says calls for her dismissal are unwarranted.

You have to wonder what his ministers would need to do to earn the president’s ire. Threatening the livelihood of millions of people who depend on the 17.1 million grants is apparently not that big a deal for Zuma. Neither is fabricating a Cabinet resolution. Mineral Resources Minister and Gupta appointee Mosebenzi Zwane lied to the nation that Cabinet had recommended that the president appoint a commission of inquiry into the banks. Zuma told Parliament he was dealing with the matter but no action has ever been taken against Zwane.

It will be interesting to see whether Zuma will have a different approach to the report on the parliamentary inquiry into the SABC, which was scathing on Communications Minister Faith Muthambi. It is not as if it was not already evident that Muthambi is incompetent and a serial bungler. But the report, adopted in the National Assembly on Tuesday, affirms how corporate governance had collapsed at the SABC and its editorial credibility destroyed through the reign of terror of Muthambi and her collaborator Hlaudi Motsoeneng.

Opposition parties are urging Zuma to fire Muthambi for her political interference in SABC affairs, her incompetence and her perjury during the inquiry.

The Democratic Alliance’s Mike Waters said the 82-page report “has all the ingredients of a Shakespeare tragedy, from treachery, corruption, deceit, intimidation, abuse of power, trickery and sheer greed.”

“The main characters in this tragedy are the Minister of Communications, Honourable Faith Muthambi and Mr Hlaudi Motsoeneng, likened to Lady Macbeth and Lord Macbeth, with the journalists and staff being the victims,” said Waters. “Both the Minister and Mr Motsoeneng believed that the SABC was their own fiefdom to do with as they pleased to further a broader political agenda.”

“It is a tale of unchecked greed, power, corruption, mismanagement, incapacity, incompetence, irregularity and unlawfulness,” he said.

“We sincerely hope that the president will set aside his factional and self-enrichment interest and do the right thing for once in his life.”

But Motsoeneng’s ability to keep bouncing back, even after damning findings by the Public Protector and numerous court judgments against him, was attributed to his close relationship and support from the president. Even after the ANC declared that they had enough of Muthambi and Motsoeneng running the SABC into the ground, Zuma let matters ride. He has never said anything vaguely critical of the two.

Zuma seems to encourage and support the deplorables – for one obvious reason: they support him. It is why he has never been able to distance himself from the Guptas, even when they used his name to land a plane at Waterkloof Air Force Base or after the release of the Public Protector’s “State of Capture” report. He has also never been able to answer why they are able to instruct him to hire and fire people. For as long as he remains chained to the Gupta family, South Africa remains in danger of the deplorables hijacking the state completely.

The big prize remains the finance ministry. While their previous deployee to the finance ministry, Des van Rooyen, has been somewhat emasculated in his position as Cooperative Governance and Traditional Affairs Minister, the deplorables continue to be frustrated by Pravin Gordhan.

Dlamini could not get the deviation she wanted in her budget to extend the CPS contract. Gordhan continues on the mission to rehabilitate South African Airways (SAA), much to the frustration of the other member of the club, Dudu Myeni. While she remains the SAA board chairperson, Gordhan is working around her to restore corporate governance and financial management.

Gordhan has been an obstacle on the nuclear build programme and has refused to intervene when several South African banks closed the Gupta accounts. His court application for a declaratory order to prevent his intervention on the Gupta bank accounts has also exposed some of the illicit activities of the family.

The next problem will be getting the finance minister to sign off on the purchase of the Habib Overseas Bank by associates of the Guptas. Gordhan is unlikely to do so. The deplorables therefore remain frustrated by their inability to move money through the banking system. This means that the downstream deplorables, those who are paid to defend Zuma, the Guptas and their allies, will also be frustrated.

Perhaps the most recent addition to the league of deplorables will come to their rescue. Brian Molefe is waiting in the backbenches of Parliament for a Cabinet position that will keep him useful to the network.

The deplorables have all suffered setbacks recently, with their reckless behaviour and incompetence catching up with them. Political pressure and opposition is also mounting against Zuma, and he might not be able to protect his basket of deplorables for much longer. When Zuma is no longer ANC president and becomes a lame duck, chances are that the deplorables might scatter.

But for now, they remain the untouchables. As Dlamini pointed out during an ANC national executive committee (NEC) meeting last year, they are not above blackmailing their comrades in order to survive.

“All of us there in the NEC have our small-nyana skeletons and we don’t want to take out all skeletons because hell will break loose.”

Neither the ANC nor the state matters. The deplorables are determined to keep their grip on power. And those skeletons might come in handy in getting the next president of the deplorables elected. DM