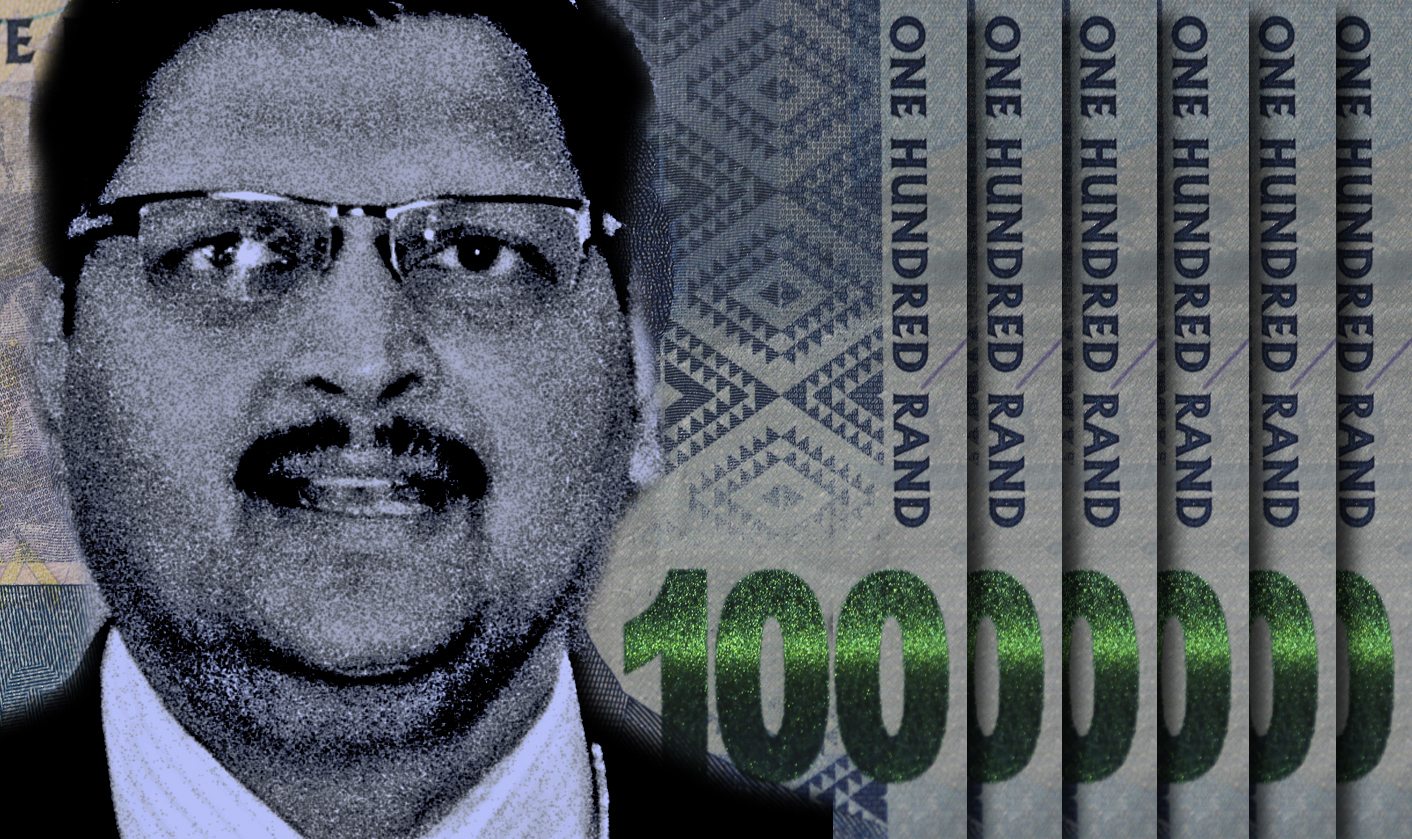 Pravin Gordhan throws down the gauntlet against the politically powerful family. By Susan Comrie, Stefaans Brümmer and Sam Sole for AMABHUNGANE.

In an explosive affidavit, finance minister Pravin Gordhan has revealed how R6.8-billion in “suspicious and unusual transactions” may have contributed to the decision by South Africa’s major banks to close accounts associated with the Gupta family.

The payments – made by the Gupta family and their companies over the past four years – are listed in a Financial Intelligence Centre (FIC) report, attached to court papers filed on Friday afternoon in the Gauteng division of the High Court in Pretoria.

Gordhan, who is the sole applicant in the case, is asking the court for an order declaring that he cannot interfere with the banks’ decision to drop the Guptas.

Gordhan has been under pressure to intervene, both from Gupta representatives and from within government. Cabinet included Gordhan in an inter-ministerial committee tasked to engage with the banks, which he has evidently boycotted.

Though in form Gordhan’s application is an attempt to get those who are pressuring him off his back, it appears an additional motive is to force information about the Guptas’ financial probity into the public domain – an escalation in the battle between pro- and anti-Gupta forces in government.

In his founding affidavit, Gordhan effectively challenges the banks to produce — in open court – classified reports that they made to the FIC, which monitors suspicious transactions to combat money laundering.

Gordhan states that “it is open to Oakbay” to require that the banks submit to court the full reports they made to the FIC, to “confirm whether there is any substance to the serious contentions advanced by Oakbay that the banks have acted improperly in closing the accounts.

“Similarly, I am advised, it is open to the banks in answering this application to disclose such reports.”

To date, the banks – Absa, Standard Bank, FNB and Nedbank – have refused to state publicly why they terminated their banking relationship with the Guptas, citing client confidentiality.

The Gupta companies and their executives have claimed that they are the victims of an “anti-competitive and politically-motivated campaign” and that the banks have provided “no justification whatsoever” for closing their accounts.

Correspondence attached to Gordhan’s application shows that between April and September, Oakbay CEO Nazeem Howa fired off repeated letters seeking to persuade Gordhan to influence the banks to reopen their accounts.

Howa told Gordhan that the banks had given no reason for closing the accounts. But in an interview in June with Carte Blanche, he read from a letter received from Standard Bank.

In it, Standard Bank cited laws, including the Prevention of Organised Crime Act, the Prevention and Combatting of Corrupt Activities Act, the US Foreign Corrupt Practices Act and the UK Bribery Act, that it said it risked contravening should it continue doing business with the Guptas.

The letter concluded: “We have conducted an enhanced due diligence of the Oakbay entities … as required by the FICA [Financial Intelligence Centre Act], and concluded that any bank or customer relations with them would increase the risk of exposure to contraventions of the mentioned law to an unacceptable level.”

Asked about the Standard Bank letter, Howa told Gordhan: “[T]o date we have not been provided with a single example where we have transgressed any of the legislation mentioned in their letters… I was merely trying to illustrate that these were the allegations that were being made, but without being provided with a shred of evidence.”

At the end of July, Gordhan wrote to both the FIC and the registrar of banks at the South African Reserve Bank, asking if there was any evidence they could legally share that would indicate the banks were right to be concerned about the Guptas’ financial dealings.

In response, FIC director Murray Michell compiled a report listing financial transactions by Gupta family members and entities that banks had reported to the FIC. The list includes 52 transactions ranging from R5,000 to R1.37-billion, and totaling R6.8-billion. It also includes 20 “multiple transactions” for which no amounts are given.

Michell wrote that the legislation did not permit him to give details of the banks’ reports, but referred to the possibility of them being submitted to court.

His report gave an indication, however, of the serious light in which the banks appear to have regarded the transactions. He says they were reported under section 29 of the FIC Act – which deals with transactions that are deemed to be “suspicious and unusual”, such as transactions reasonably suspected to involve tax evasion, money laundering or financing of terrorist activity.

Gordhan’s affidavit states: “[The FIC report] reflects the increasingly serious state of affairs which has arisen. This is illustrated by the number and scale of reported transactions linked to Oakbay.”

Separately, registrar of banks Kuben Naidoo wrote to Gordhan that Standard Bank informed the Reserve Bank’s financial surveillance department about “a particular foreign exchange transaction involving VR Laser Asia, an associated company of Oakbay, which could form the basis of an exchange control related investigation by that department”.

Guptas push and Gordhan pushes back

The correspondence attached to Gordhan’s affidavit also gives insight into a behind-the-scenes tug-of-war over the inter-ministerial committee that cabinet appointed in April to “engage” with the banks on the Guptas’ behalf.

The committee was led by Mineral Resources Minister Mosebenzi Zwane, a Gupta acolyte, but included a clearly reticent Gordhan.

Gordhan, his affidavit shows, sought legal advice on whether there was any legal basis for him as finance minister to intervene with the banks.

A resulting legal opinion, from advocates Jeremy Gauntlett and Frank Pelser, warned that not only was there no legal way he could intervene, but that the planned meeting between ministers and the banks could have “unintended consequences” and create “adverse perceptions” about political interference in the banking sector.

This was echoed in a letter Lesetja Kganyago, governor of the Reserve Bank, sent Gordhan. He wrote:

“We caution against the unintended consequences of this being viewed as undue political interference in banks’ operations… This could introduce heightened levels of uncertainty and pose a risk to South Africa’s financial stability.”

When the scheduled meeting between the ministerial committee and at least one of the banks went ahead in early May, Gordhan did not attend.

Despite this, it appears that Howa continued asking Gordhan to intervene. Following a meeting with Howa on 24 May, Gordhan wrote to him, saying:

“[T]here are legal impediments to any registered bank discussing client-related matters with the Minister of Finance, or any third-party… The recent attacks on the integrity of the National Treasury are not helpful or in the national interest and should be avoided.”

“While I understand the legal impediments facing you as political head of our economy as well as the challenges presented by the current regulatory framework, I would like to believe that our detailed discussions this morning will open the way for you to consider those difficulties… I look forward to hearing from you about any possible assistance you are able to offer us in these trying times.”

A second legal opinion Gordhan obtained in May notes that “what the correspondence reflects is that Oakbay’s request to the Minister is for him to exercise a political power pursuant to Government policy… there being, as Oakbay apparently acknowledges, no legal basis for the Minister to intervene.”

By August, Gordhan appears to have run out of patience.

On August 10 he wrote to Howa: “[Y]ou had undertaken to provide ‘all relevant information’, based on my request at the meeting for all relevant correspondence from banks… To date I had not received any copies of these letters from banks related to the closure of your accounts. It is concerning that Oakbay still does not accept that the Minister of Finance, in law, is unable to interfere with the relations between registered banks and their clients.”

Gordhan told Howa that he would meet with him, but only after he had been given the correspondence from the banks. Still Howa kept pushing for a meeting.

On September 9, Howa wrote to Gordhan: “I am very happy to share with you my full file of correspondence with the banks… It makes for interesting reading. I would prefer if possible that we meet to discuss the process we have engaged in as they have been supplemented by several meetings and telephone calls with will add considerable flavour to the correspondence and provide you with a much fuller picture.”

Instead it is Gordhan who has now started colouring the picture in public – and it’s not pretty.

The respondents, including the Gupta companies and the banks, have 15 days to file their answering affidavits. DM