Reshuffle Catch-22: Would a Cabinet shake-up help Zuma or backfire against him? 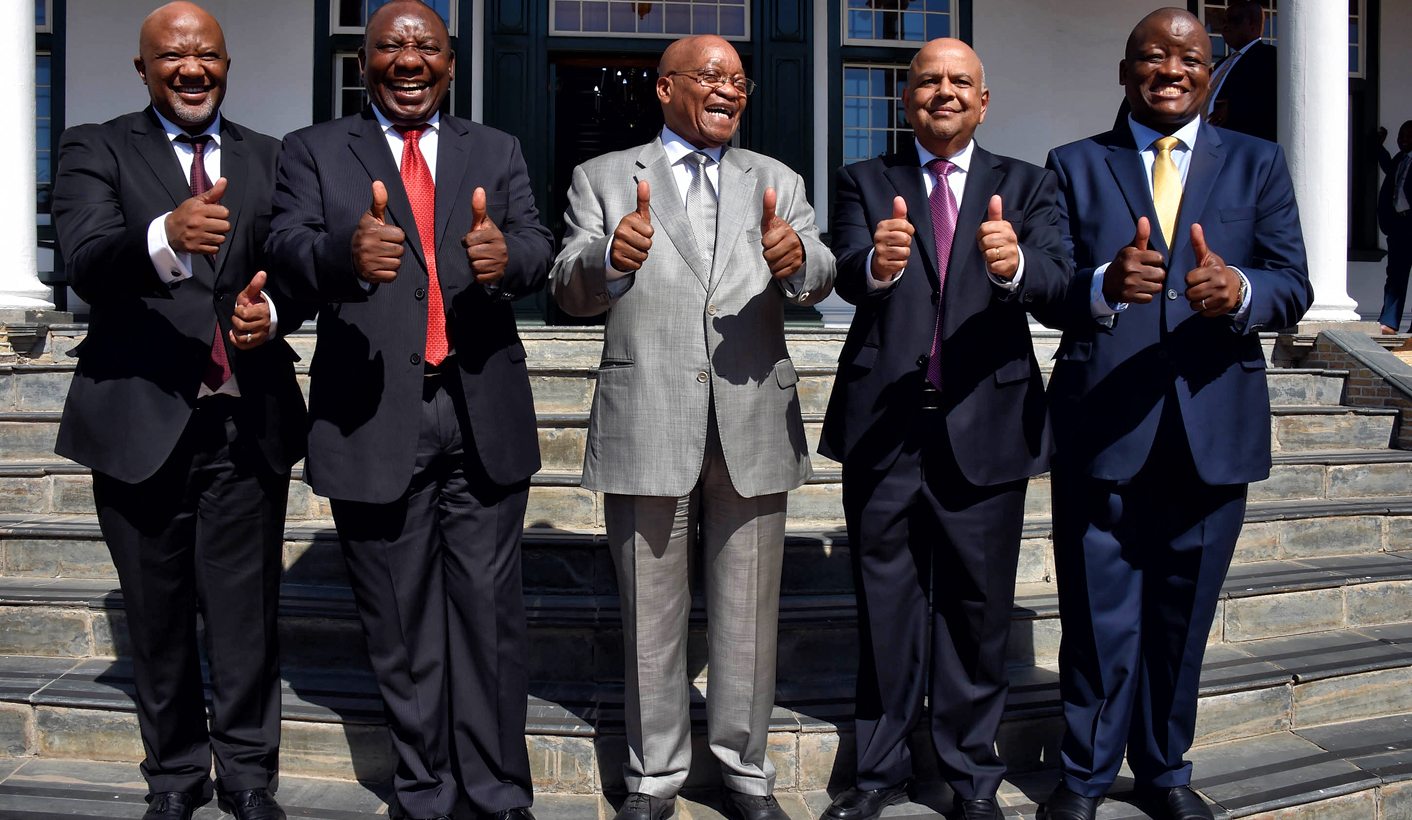 For as long as the danger of a Cabinet reshuffle hangs over the country, particularly if it targets the finance ministry, President Jacob Zuma has enormous power. But as soon as Zuma announces the much-anticipated changes to the Cabinet, he loses his leverage – and possibly his usefulness to those in his political and business circle. Including the ANC’s spanking new MP, Brian Molefe, into Cabinet would be yielding to pressure from this faction but it could also precipitate a massive political, and perhaps economic, crisis – depending on his post. And what happens to Zuma then? Surely this is something he should consider before taking the plunge. By RANJENI MUNUSAMY.

Brian Molefe would be gambling with his life if he took the oath as an ANC Member of Parliament on Thursday without getting the assurance directly from Zuma that he will be appointed as a minister. If Molefe learnt second hand of his imminent promotion, he might end up with a position he did not count on. Or, worse still, he might be cooling his heels at the Saxonwold shebeen for some time before he gets served.

Nobody in the ANC appears to know what Zuma’s game plan is regarding the Cabinet reshuffle. Because Zuma does not make his decisions based on logic or in the interests of the country, speculation about what he will do is futile. Zuma is unlikely to fire non-performers and reward those who take their jobs seriously. This reshuffle is about political manoeuvres and responding to the demands of his friends and political allies as the stakes rise ahead of the ANC’s elective conference in December.

Molefe was hastily sworn in as an MP, through falsified ANC membership in the North West province, seemingly so that he could be in place for the long-awaited Cabinet reshuffle. Speculation was rife that the reshuffle would happen this weekend to include Molefe and presidential contender Nkosazana Dlamini-Zuma in the Cabinet.

But Zuma has a major problem on his hands. The prospect of a Cabinet reshuffle might give him tremendous power right now – he is in effect holding the country at ransom – but the moves he makes could be self-defeating.

For those in his camp, the reshuffle is a big stick to punish their political opponents and place minions in strategic positions to carry out their instructions. This has worked for them before, with Mineral Resources Minister Mosebenzi Zwane working almost exclusively to do the bidding of the Gupta family. Des van Rooyen was meant to do the same in the finance portfolio but several months of intricate planning came to naught when he had to make way for Pravin Gordhan within four days.

Had Van Rooyen remained in place as Minister of Finance, South Africa would have been a very different place right now. We would most certainly have been downgraded to junk status and the National Treasury would have been looted.

Oddly, Zuma still does not appreciate the consequences of his actions when he fired Nhlanhla Nene for no reason and appointed Van Rooyen. He believes that that the billions of rands that were wiped off the stock exchange and tumbling of the currency was part of the normal ebb and flow of the markets. He also thinks that the recovery after Gordhan’s appointment remedied whatever happened over the four days of mayhem.

Because Zuma is unconcerned by the chaos of those four days, the propensity is great for him to make other dangerous moves with the Cabinet. He has in fact been asking his allies to protect him when he makes changes to the Cabinet, expressing annoyance that pressure from the ANC and business leaders forced him to remove Van Rooyen and appoint Gordhan in the finance portfolio.

Now the scene is set for the reshuffle – although nobody seems to know when exactly it will take place.

The ANC Youth League (ANCYL) has for some time been cranking up the pressure on Zuma to wield the axe against members of the South African Communist Party (SACP), particularly the Higher Education and Training Minister Blade Nzimande. This is to further weaken the SACP’s voice in the alliance and designate the blame for the turmoil in the higher education sector solely on Nzimande.

Speaking at a SACP media briefing on Sunday, Nzimande said: “We do not like this thing, as ministers, of being shouted at from the streets to be removed.”

He said the SACP would comment on the reshuffle if and when it happened. The SACP has been bracing for months for a purge of its members from the Cabinet.

They have not been alone in doing so.

Ministers who advocated for Zuma to step down as president at an ANC national executive committee (NEC) meeting late last year are also expecting to lose their jobs in the reshuffle. They include Tourism Minister Derek Hanekom and Health Minister Aaron Motsoaledi.

Most public concern, however, is centred on the finance ministry because of the consequences of another reckless appointment. Gordhan and his deputy Mcebisi Jonas’s steady hands on the National Treasury is not universally appreciated – as was evident from some in the ANC benches in Parliament during the presentation of the Budget.

Gordhan and Jonas have made powerful enemies. Their determination to guard the National Treasury from political manipulation and refusal to cede decision-making to the Gupta family have turned them adversaries who must be dislodged from their positions.

Attempts last year to charge Gordhan with corruption through two investigations by the Hawks flopped, thereby invalidating the excuse to fire him. Those clumsy attempts to charge him also saw a spirited fight back from Gordhan and prompted mass public support for him.

Jonas blew the lid open on the Guptas’ state capture operation. By speaking out about how the Guptas offered to make him minister in exchange for R600 million, Jonas opened the door for others to come forward.The Public Protector’s investigation into state capture relied heavily on Jonas’s evidence and it is now common knowledge how the Guptas go about making political appointments by bribing people.

The finance ministry has also resisted pressure to intervene on behalf of the Guptas when their bank accounts were closed, with Gordhan opting to go to court to ask for a declaratory order to prevent his involvement. The Guptas are thus desperate for Gordhan and Jonas to be replaced by malleable candidates.

Gordhan and Jonas are not players in the ANC succession battle that currently defines much of the warfare in the party.  They are the political custodians over the state’s finances, which are needed to finance lobbying campaigns ahead of the ANC conference. The commitment by the Treasury to control government spending and tighten fiscal discipline also impedes corrupt activity that benefits a legion of politically connected people.

The Budget was severely criticised by the ANC youth and women’s leagues, both of which are heavily invested in the succession battle. The women’s league said in a statement that there was “incoherence” between the State of the Nation Address and the Budget speech and if this trickled down to other departments, there would be “direct sabotage to the radical socio-economic transformation agenda of the ANC-led government”.

ANCYL president Collen Maine claimed at a meeting in KwaZulu-Natal this weekend that Gordhan and Jonas were trying to stage “regime change” and called on Zuma to act against them. He also accused Gordhan of being a spy for monopoly capital, and suggested that he should be dealt with in the same way the ANC dealt with apartheid informers during the liberation struggle. Although Maine does not seem to be vested with much knowledge about the ANC and its struggle for liberation, he cannot be ignorant of the methods used to deal with spies. These included torture and death.

These sentiments give an idea of the passionate dislike for Gordhan and the kind of pressure being exerted on Zuma to execute a purge in Cabinet.

It would have been dicey for Zuma to dabble with the finance ministry before the Budget was presented. But if he does so now, a new minister of finance will have big problems trying to restructure the Budget and reassign funds to where Gordhan’s critics say they should go. For example, it would be virtually impossible for a new minister to allocate a massive chunk of funding for a nuclear build programme as money would have to be taken off from existing programmes. There would also be a fight back from the officials in the Treasury and turbulence throughout the bureaucracy.

The political fallout would be even bigger. While Zuma has the constitutional prerogative to make whatever changes he wants to Cabinet, his actions could provoke a rebellion from within the ANC if he swings the axe against his detractors and in the finance ministry. The centre in the ANC is barely holding as it is and a daring move by Zuma to fire people for factional purposes would no doubt bring the fight out into the open. A mass walkout from Cabinet is possible and the rebellion already brewing against him in the NEC would intensify. If Deputy President Cyril Ramaphosa leads the walkout, his presidential campaign will swing into action.

Zuma’s ace card, the Cabinet reshuffle, would have been played and he would have nothing to rely on except the support of his camp. In such a scenario, what use would Molefe as finance, public enterprises or energy minister be to him? Molefe would not be able to aid or cushion the president in any way. Dlamini-Zuma could hardly be of use to him either. The Cabinet post would facilitate her own campaign, and cover her travel and security costs, but she will not have the powers to rescue Zuma if there were another move to unseat him.

Zuma’s allies in the crumbling “premier league” faction and the Guptas would also not help him. They are already divided over their preferred candidates for election and will not stick their necks out for Zuma if he is of no use to them. Once he is no longer ANC leader and state president – whichever comes first – he will be a dead weight to them.

So while Zuma looks all-powerful now as the axe hangs precariously over Cabinet ministers, he could engineer his own demise if he bows to pressure from his camp. There might be desperation for Molefe and Dlamini-Zuma to get into Cabinet but Zuma had better move carefully in choosing their portfolios so as not to prompt a backlash against himself. He might resent Gordhan and Jonas, but trying to get rid of one or both of them could be to his own detriment.

Zuma found himself jobless and politically isolated before, facing a myriad of legal and financial problems. He would only have himself to blame if he finds himself in that position again. DM