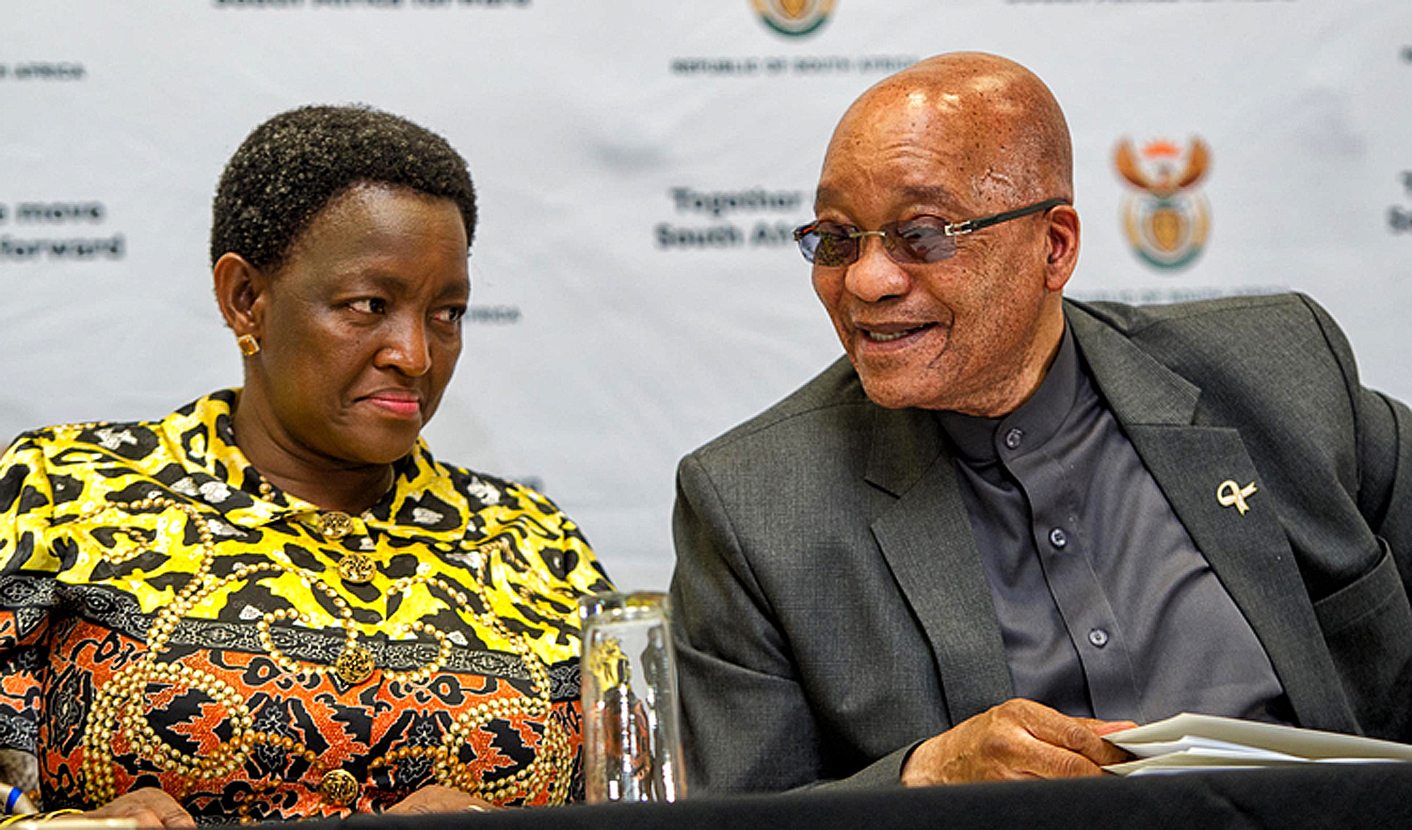 Cash Paymaster Services (CPS) may squeeze the South African Social Security Agency (SASSA) for an extra R1.3-billion a year to extend its welfare distribution contract – and Social Development Minister Bathabile Dlamini is making sure it gets what it wants. By Craig McKune for AMABHUNGANE.

This is more than a 50% jump on the current annual R2.2-billion fee – and after years of sitting on their hands, SASSA officials have almost no negotiating position for a counter-offer.

This week, they had one damp round left in their arsenal. They planned to beg the Constitutional Court – which invalidated the CPS contract in 2014 – to let them extend CPS’s contract.

The inevitable dressing down from the court might have given SASSA the cover it needs to negotiate better terms with CPS.

Instead, Dlamini aimed that round into the dirt on Thursday, stopping her officials from filing the papers so she could take the weekend to consider, and “consult” with somebody.

The events have unfolded with leisure since October last year, when SASSA privately concluded it would not be ready to take over the payment of social grants by March 31, 2017.

CPS’s contract was due to expire on that date – then less than five months away.

On October 27, 2016, the agency received a commissioned opinion from Advocate Wim Trengrove. He explained that their only option was to cut another “unlawful” deal with CPS.

To mitigate this problem, he said that SASSA should “without delay” report to the Constitutional Court.

Trengrove said the agency had “radically departed” from a plan made in 2015, which it promised the court it would follow. The plan was to ensure SASSA could be the grant paymaster from March 31, 2017.

The mooted new deal with CPS should be disclosed promptly to give the court and others a chance to suggest a better option.

SASSA should also start speaking to CPS, said Trengrove, to establish what sort of a deal they might accept.

SASSA also solicited two other senior counsel’s opinions. amaBhungane has not seen these, but they are said to be similar in many respects to Trengrove’s.

Apparently, these were not clear enough for Dlamini, so she and officials flew to Durban to meet Jacob Zuma’s personal and official lawyer Michael Hulley.

By then it was December and two precious months had already slipped by.

Dlamini asked him more or less the same question, Hulley previously confirmed to amaBhungane – although it is not clear what he advised.

Come February 1, the Court, Treasury and CPS remained formally in the dark.

On that day, SASSA officials faced parliament’s social development portfolio committee. MPs wanted to know what was going on.

Surprisingly, Dlamini bunked the session. AmaBhungane later reported that this was after a tense standoff with officials, where she tried to present a plan to keep CPS for two to three years.

Instead, SASSA officials presented an awkward compromise. They told MPs there was no choice but to extend CPS’s contract by one year.

They promised to make the long-avoided Constitutional Court application a week later, on February 8.

Also on February 1, Finance Minister Pravin Gordhan wrote to Dlamini to say treasury would not support an extended contract without the Court’s blessing.

There was not enough time to run an open, competitive tender, Magwaza told Fuzile. SASSA had “no choice” but to signal an emergency and sign with CPS.

Magwaza let slip to Fuzile that SASSA needed CPS for 18 months – not 12, as MPs were told a week before.

Worse, Magwaza disclosed that CPS would need to be paid between R3.1- and R3.5-billion a year, more than 50% higher than the present R2.2-billion fee.

And even worse, SASSA’s budget allocation was only R2.6-billion, so they’d need a lot more money to gratify CPS.

The Treasury was unmoved.

Fuzile’s colleague, supply-chain manager Solly Tshitangano wrote back to Magwaza the next day. He said this was a “self-created” emergency. SASSA should have sought to issue a tender in December or even January.

Treasury could not support the extension of an invalid tender and would wait to hear the Constitutional Court’s finding on the application, Tshitangano said.

It was only the next day – February 9, with just seven weeks to go – that SASSA approached CPS with its first formal request.

Serge Belamant responded immediately. He is the executive chairman of CPS’s US parent Net 1. He said CPS was “amenable to the proposed exploratory meeting to discuss the probabilities to assist SASSA…”

By Wednesday morning, SASSA’s application was ready to be dropped off at the court. Instead, amaBhungane learned, Dlamini slammed on the brakes. SASSA staffers were flown from Pretoria to urgently meet her in Cape Town.

At about the same time, amaBhungane spoke to SASSA spokesman Paseka Letsasi. Letsasi confirmed that the court application had not been filed. He sheepishly said: “We had to comply with internal processes.”

Later that day, news reports suggested Dlamini had other ideas.

An ANA report said Dlamini’s spokeswoman Lumka Oliphant “insisted on Wednesday that the ministry could not move ahead with without national treasury”.

ENCA quoted Oliphant saying: “That decision [to apply to court] must come from the minister and the minister has not yet taken a decision.”

Dlamini had “intervened”, it was said, and Thursday was a busy day for her officials. They threshed out a new court application. How it was changed is not known, but there seemed to be certainty that the completed papers would be in by close of business.

Then, nothing. Dlamini had apparently intervened again. She needed the weekend to think about it.

The longer the clock ticks, the stronger Belamant’s negotiating position becomes, yet on Friday SASSA reported that it had still not started formal negotiations with CPS.

Belamant told Business Day SASSA should not approach the court at all: “How is it possible for SASSA to go to the Constitutional Court to extend a contract that has not only been declared invalid but as of April 1 will have terminated?”

SASSA and CPS should just sign a new contract on new terms, and treasury should allow this as it was an emergency, he reportedly said.

Dlamini, SASSA and Belamant did not answer amaBhungane’s questions emailed on Thursday night.

But a few hours after they were sent, SASSA issued a statement appearing to react. It said there was no enmity between Dlamini and Finance Minister Gordhan:

“Such allegations are malicious and are intended to wedge a division between herself and [Gordhan].”

The statement read that Dlamini “would not under any circumstances wish to see a weakened minister of finance and a weakened treasury”.

But the ANC Women’s League – Dlamini is its president – is on a different page. It released a statement to say it “unashamedly rejects any proposal that the payment of SASSA grants to be outsourced to one of the major commercial banks”. (sic)

According to Dlamini’s Women’s league: “Support to such [a] plan will be a conscious sabotage to the radical socio- economic transformation agenda.”

As Belamant squeezes, the political pressure is rising. DM