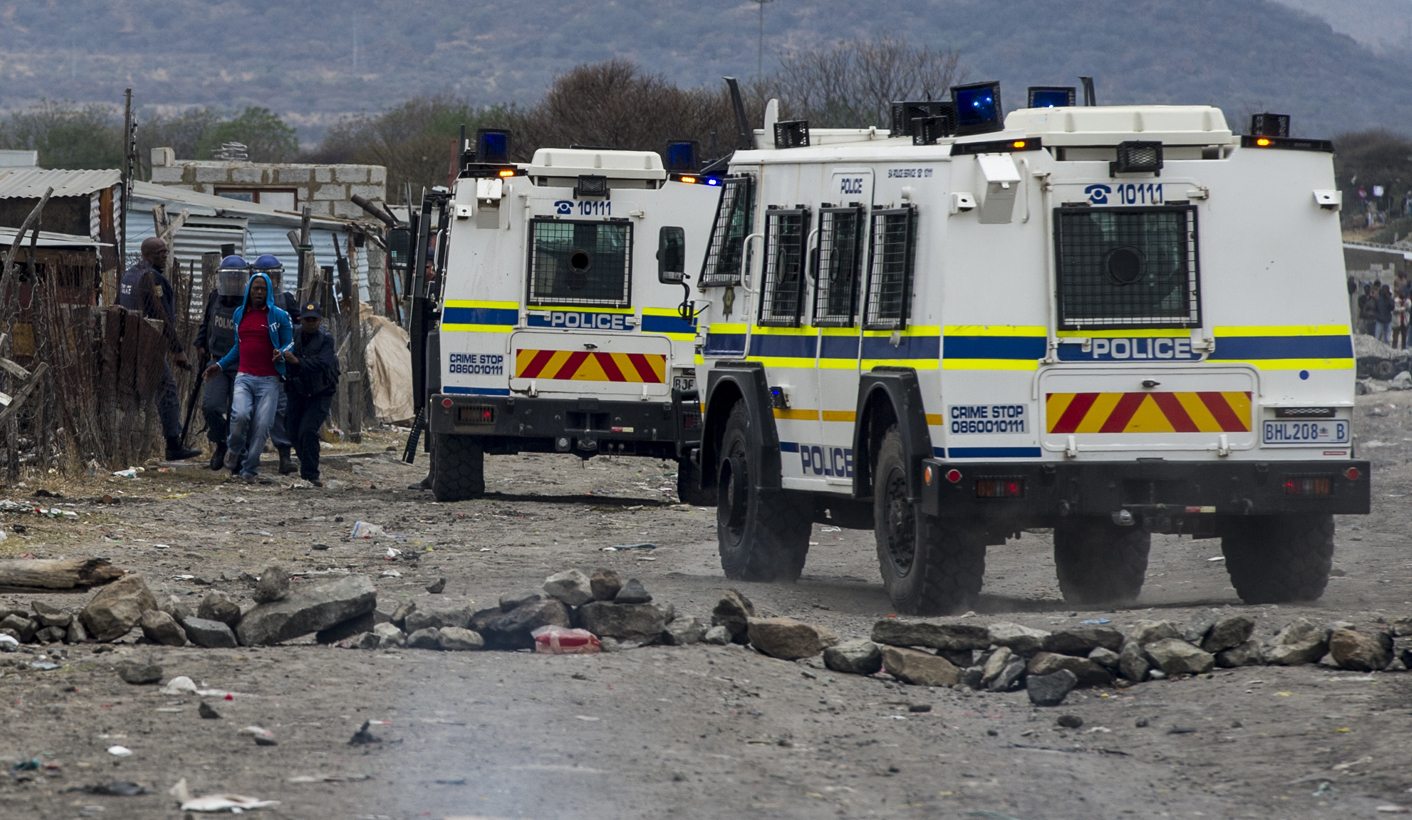 It’s Mining Indaba week in Cape Town, where delegates can pay upwards of R20,000 per ticket for the chance to hear mining’s power players give the state of play for the industry. On the other side of town there’s a very different sort of event happening: the annual Alternative Mining Indaba, where people affected by mining in less positive ways discuss how best to mount a resistance. By REBECCA DAVIS.

“Mining means turning living things into dead objects to sell for profit.” That’s one of the many lines you won’t be hearing at Mining Indaba this year. At the Alternative Mining Indaba, however, it’s a run-of-the-mill sentiment – in this case expressed by the BenchMarks Foundation’s David van Wyk. Indeed, it’s one of the milder opinions about extractive industries expressed.

“Our government is always on the side of the mining companies and not on the side of the people,” Pondoland activist Nonhle Mbuthuma-Forslund had earlier told the audience. “That’s why we are facing a lot of violence and death. All these struggles, it doesn’t frighten us. We are ready to die for that land.”

At Mining Indaba you’re also unlikely to hear an “eco-feminist critique” of the Africa Mining Vision, or the idea that a “decolonised civil society must protect its resources”. Neither are you likely to be shown poignant photo essays of Tanzanians ordered to leave their villages at gunpoint to make room for a gold mine expansion.

A delegate from a Free State mining town put it succinctly during a group discussion: “Mining is hell.”

Mining may be hell, but it’s also not about to stop – as long as the commodities market holds out. There’s generally a sense of resignation about that. Year after year, the Alternative Mining Indaba sees dialogue take place about how best to deal with mining, rather than how to halt it. Nonetheless, there have been indications from this year’s event that mining is in urgent need of better PR.

“There is no way that mining can be eco-friendly,” a Latin-American activist said dismissively during one discussion about mitigating mining’s environmental damage. “It’s a lie.”

This year’s Alternative Mining Indaba’s theme is “Making natural resources work for the people: Domestication of the Africa Mining Vision from vision to reality”. The Africa Mining Vision (AMV) was the feelgood resolution adopted by African heads of state at the African Union summit in 2009. It is aimed at integrating mining with the imperatives of local development, “making sure workers and communities see real benefits from large-scale industrial mining and that their environment is protected”. It’s also not working.

On Tuesday, the Bench Mark Foundation’s David van Wyk rattled off a rapid list of ways in which the Africa Mining Vision is failing: because it is not legally enforceable; because it does not challenge foreign mine ownership or private ownership, and because it is not attempting to control the speed at which mining in Africa takes place. “If we slow down mining, then we make the horizon for mining much longer,” Van Wyk said.

But by definition, the Africa Mining Vision also “offers no way out of the extractive trap that Africa finds itself in”, to quote Van Wyk. Community members from mining-affected villages in South Africa, Lesotho, Swaziland, Malawi, DRC and beyond took the microphone in turn to sketch out the nature of that “trap”. They spoke of water shortages, of blasting affecting children’s hearing, of a failure to obtain community consent, of vegetation and lifestock destroyed.

A major factor contributing to the toothlessness of the Africa Mining Vision seems to be widespread lack of knowledge about its contents or even existence. “The AMV has a level of technicality which most will not understand,” suggested Dr Claude Kabemba of Southern African Resource Watch. Nonetheless, there was reasonable consensus that as flawed as the Africa Mining Vision might be, its implementation would represent a step forward towards protecting the interests of mining-affected African communities.

The Zimbabwe Environmental Law Association’s Mutuso Dhliwayo suggested that the AMV did well to speak to concerns about the environment, health and illicit financial flows. The “development trajectory offered by the AMV”, Dhliwayo has previously written, takes the continent closer to “[reversing] the curse of mineral wealth in Africa”.

There was one point delegates repeatedly returned to: if mining is supposed to make our lives better, why is it making things worse?

“Has mining benefitted the community?” asked Malawian activist Paul Mvula. “To answer this question, you just have to go into the community.” Mvula flicked through a slideshow of photos: dysfunctional boreholes, corrupted water sources, abandoned toxic waste sites – and shiny 4x4s driven by the chiefs in mining areas.

Many delegates complained about being unheard or ignored by the shiny folks across town at the Mining Indaba. “We don’t have a seat at the table,” said Dhliwayo. Anglican bishop of Pretoria Reverend Jo Seoka told the audience that he had attempted in vain to meet with government to share his concerns about mining.

In a context where governments and mining companies often seem untouchable or unreachable, practical solutions to empower civilians are in high demand. Environmental journalism group Oxpeckers introduced a handy tool called #MineAlert, which they launched last year to help ordinary citizens find out more about mining projects in their area. In Ghana, for instance, all mining companies are supposed to pay 3% of revenues generated to local residents. On the #MineAlert site, Ghanaians can check whether their village has received the funds due to it, by plugging in their location.

On Wednesday, the worlds of Mining Indaba and its alternative incarnation will meet, when activists and faith leaders march to the Cape Town International Convention Centre. If previous years are anything to go by, Mining Indaba delegates within the venue will remain largely oblivious to the commotion outside.

In the meantime, the conversations of those affected by mining, but rarely consulted about it, will continue. The fundamental question, suggested Dr Kabemba, is: “What do we want from our minerals? What type of things do we want our minerals to give us?”

And perhaps just as pertinently: What price are we willing to pay in exchange? DM