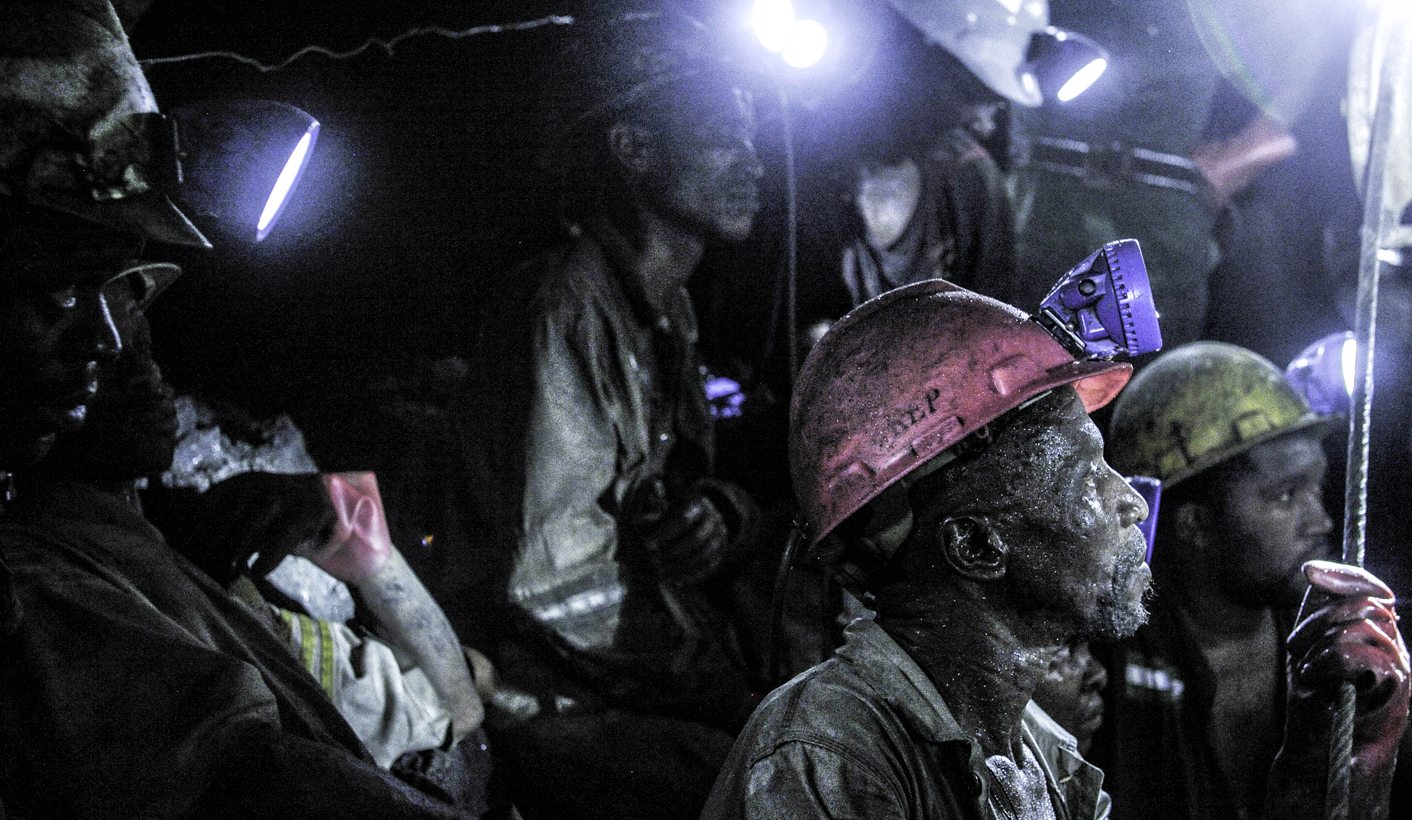 The only thing anyone was talking about at this year’s Investing In Africa Mining Indaba was the new mining charter set to drop in March of this year. Will it be the Radical Economic Transformation engine that mining executives have not been waiting for? Or will it be something… well, more typically ANC. By RICHARD POPLAK.

“Mining is back up,” crowed Alex Grose, managing director of Mining Indaba, during his opening remarks to a packed auditorium in Cape Town’s bustling conference centre. If he truly believed this – or, rather, if he wanted to forcefully promulgate this statement – then perhaps superstar economist Dambisa Moyo was not the best choice for a keynote speaker.

Let’s just say that bats of Death poured from Moyo’s mouth as she spoke.

Things we’re alternatively “not good”, “unfortunately quite bad”, or “dangerous”, according to the Zambian bean counter, who didn’t have much time for the Trump Will Be Good For Business line. “In the United States,” she said, “47% of jobs will soon be disintermediated by technology.” Robots don’t vote, but pissed off white male ex-factory workers do – and they tend to vote for lunatics. According to Moyo, the economic outlook may be terrible, but the populist fascist dictator outlook is rosy. And getting rosier: “Global debt burden is at 350% of [the world’s] GDP,” she reminded us – which is hilarious, mostly because it implodes the collective dreams of “worth” and “value” that power the monetary economy.

What she was saying, basically, is that we’re all going to die, in agony, soon, and probably all at once.

Did I mention that Mineral Resources Minister, Mosebenzi Zwane, gave the opening address? Zwane, by contrast, was positively cheerful, which I took to be a de facto endorsement of Moyo’s vivid doomsaying. The Gupta appointed minister kicked off by saying:

“Mining contributes about 8% directly to South Africa’s GDP and just under 460,000 direct jobs. With an estimated 2.5- to 3-trillion US dollars in non-energy mineral reserves still in-situ, we are looking forward to another 150 years of mining in South Africa.”

Not if Moyo has her way. (She couldn’t help but mention that South Africa and Nigeria, sub-Saharan Africa’s economic “giants”, were acting as a drag on regional growth, which has slowed to a projected 3% for 2017.) But Zwane had come to open Indaba, with its 6,000 delegates from 100 countries, by insisting that South Africa, and by extension Africa, was “open for business”. He went all reverse Game of Thrones, insisting that Winter was not coming – or, rather, was not coming back – and that a spring of sorts was on its way.

He then nudged us towards the nut: “In the mining sector, we must remain committed to the principle of shared prosperity and responsible investment. We ask the investment community to seize the opportunity to partner with black people, communities and workers meaningfully in their operations.” That would be nice. But how? “We have put all efforts in place to ensure that amendments to the principal mining legislation – the Mineral and Petroleum Resources Development Act – are processed and finalised as a matter of urgency. This process is well under way and public hearings are taking place towards the finalisation of the Bill. We expect it to be concluded by June 2017.”

Whether or not South Africans – the majority of whom have been waiting for a version of mining that isn’t based on an ancient colonial model – should be excited about this depends on one’s definition of excitement. But if anything in the minister’s dreary speech elicited a consensus view of excitement, it was this:

On the revised Mining Charter, the regulatory tool governing transformation in the sector, we have consulted extensively with stakeholders. The final Mining Charter will be gazetted by March 2017 and will be reflective of the views of stakeholders, in the interests of South Africa and provide for investor certainty. We call upon investors to come to South Africa and engage us frankly as we move towards transformation of our economy.

The only time mining indabas turn vaguely sexy is when select attendees engage in sad middle-aged adultery in conference centre hotel rooms. This year was an exception, due in a small part the crazed Cheeto in the room – and his orgy of regulation-busting – who has ushered in the right kind of uncertainty, at least as far as miners are concerned. As the Dodd-Frank Act gets shoved through a shredder, bribing overseas officials will once again be a thing that Makes America Great Again, and Africa will probably feel some of the love, if only briefly, before the burn of the thermonuclear flash incinerates us all.

There was also Zwane’s new mining charter, about which the local industry was in a flap.

Big Mining and governments, although the two are roughly analogous in Africa, still don’t get along. They have enriched each other massively, almost always to the detriment of the general population, and yet they bitch and snipe and treat each other with mistrust. It’s a bad, if insanely profitable marriage – and as with all bad marriages, watching the two at the Shabbos table is a cringe-worthy affair.

Mining Indaba is the Shabbos table.

There are always a few guests who try to make the best of things: if a Deloitte press release was to be taken at face value, Zwane’s opening address “was one of the more positive we’ve have had from the ministry in the past few years”.

It was just wonderful to listen to “Minister Zwane appeal to investors and government alike, to acknowledge and help drive the concept of ‘shared prosperity’,” said Andrew Lane, Africa Mining Leader for Deloitte. “Hearing the minister promote government’s open-door policy was very encouraging.”

Yeah well. This may depend on how Lane and others take to the ANC’s re-upped version of Radical Economic Transformation, which shall apparently be baked into both the revamped legislation and the new charter. If you believe the Institute for Race Relations, the ANC has, of course, already nationalised the land we stand on and the minerals beneath our Air Jordans. Which may well be, but no more so than have, say, the Americans and the Canadians. Sub-soil rights always belong to the state – only a South African think tank would assume that we’re exceptional in this regard. After all, that’s how states get to be states in the first place.

But how does all of this mean anything to your average South African punter? Short answer: It doesn’t. And so the press conference that followed the opening address was a far testier affair. It was quarterbacked by Zwane’s deputy, Minister Godfrey Oliphant, who unlike his superior actually appears to know what he’s talking about. And Oliphant wanted to make sure that the assembled hacks understood that the government was done yapping about yapping about drafting the charter. “We have been talking since August last year,” said Oliphant, in response to a question regarding pushback from the Chamber of Mines, who appear unhappy with the process. “Engagement cannot be engagement for the next 10 years. The racial composition of the mining industry has to change. Communities need a piece of the pie. Everyone needs to benefit.”

Amen. But what does transformation mean to these two cats? How does it all link up with the newly re-upped ANCs “nine point plan” of radical economic what-what? The industry is nervous that the charter will call for wholesale restructuring of their businesses, and transformation goals that are unrealistic. How will it all work?

“The industry recognises and respects the role of government and that all stakeholders have an interest in the outcomes,” read a frenzied statement following the press conference. “However, the practical reality is that it is the Chamber’s members – representing 90% of South Africa’s mineral production by value – who are the companies that will be responsible for implementing the revised Mining Charter, and will in fact be assessed based on the targets set. It is for this reason that the Chamber and its members seek a practical and workable third iteration of the Charter that can be practically implemented in our ongoing transformation journey.”

Meanwhile, Thabo Shogole, he of the SA Mining Development Association, was equally pissed. When, he asked the ministers, was the government going to get itself together and figure this mining business out. Four centuries of precedent, 22 years of practice.

Time to get it right.

No one here, on the pro, con, or simply just drunk side of the equation believes that will happen. Not that it matters. Because, as per Moyo, nothing matters: the new charter will be used to line the dens of whatever monsters emerge from Hell following the global meltdown. The time for South Africa as mining paragon is long gone. Now, we’re just going through the motions. DM