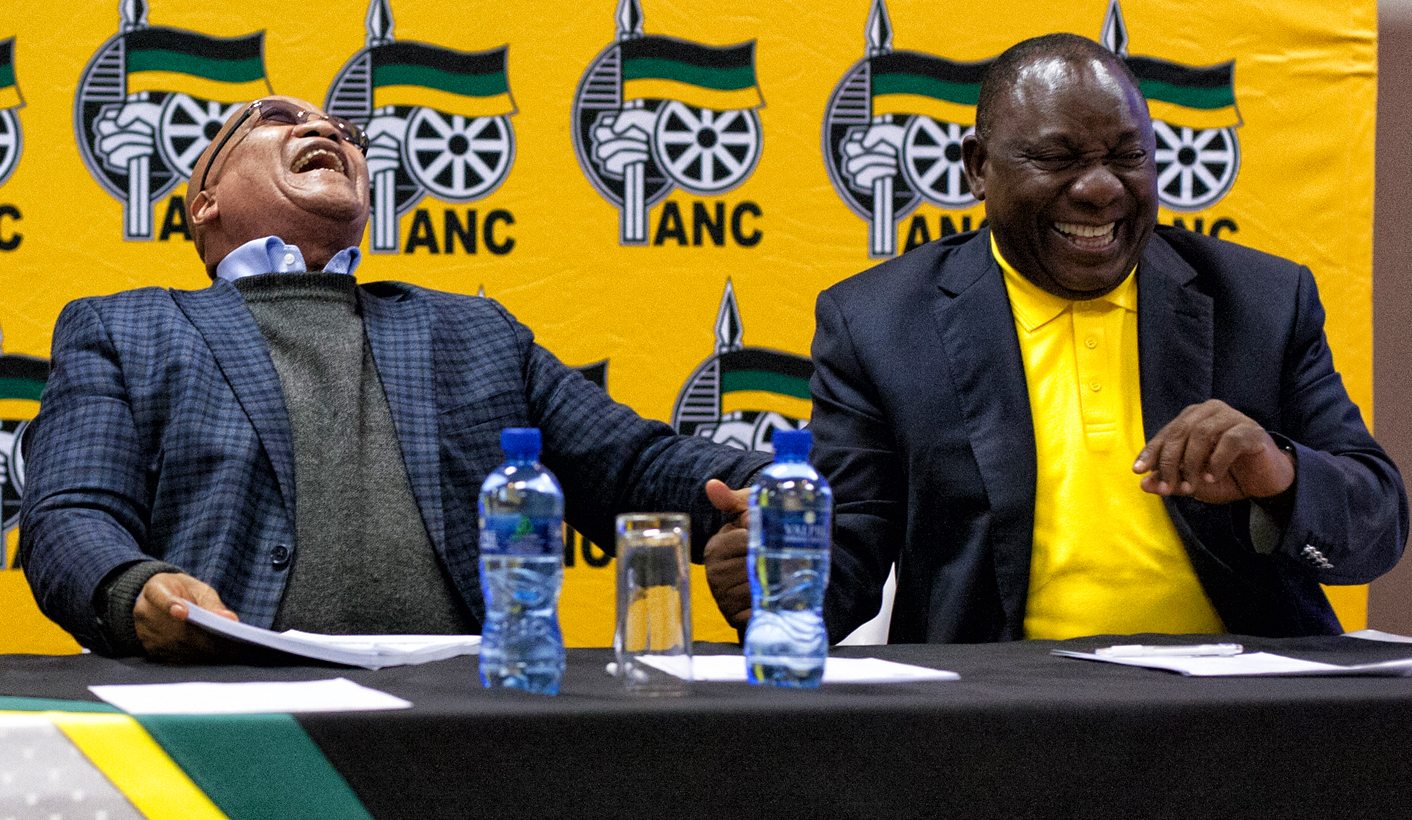 President Jacob Zuma made a shocking revelation in Parliament on Wednesday that Mineral Resources Minister Mosebenzi Zwane’s faked recommendation for a commission of inquiry into the closure of the Gupta bank accounts was still under consideration. Despite the pressure coming at him, Zuma is still allowing the Guptas to control the presidency, with a farcical inquiry into South Africa’s banks now possible. While Zuma remains under the thumb of the Guptas, Cosatu has placed its bets on Deputy President Cyril Ramaphosa to succeed Zuma as ANC leader. They are effectively handing Ramaphosa a blank cheque – much like the one they gave Zuma previously. By RANJENI MUNUSAMY.

A statement issued by the presidency in September made it clear that Minister Mosebenzi Zwane was on his own frolic when he announced that Cabinet had resolved that a presidential commission of inquiry should investigate South Africa’s four major banks for closing all Gupta-linked bank accounts.

“He does not speak on behalf of Cabinet and the contents of his statement do not reflect the position or views of Cabinet, the Presidency or government,” President Jacob Zuma’s office said at the time.

Responding to a question from United Democratic Movement leader Bantu Holomisa in the National Assembly on Wednesday, Zuma read out a reply saying an inter-ministerial team looking into the issue had given a report to Cabinet.

“No other mandate was given to this team of ministers. As we have stated before, the statement released by Minister Zwane does not represent the views of government and Cabinet. I reprimanded the minister for the remarks and he apologised,” Zuma said.

But when asked by Holomisa about the status of Zwane’s recommendation, Zuma said it was still under consideration. This means that despite no decision being taken by Cabinet, the president was still willing to consider Zwane’s desperate intervention on behalf of the Guptas. He said government could not sit by and watch banks close people’s accounts “willy-nilly”.

In October, Finance Minister Pravin Gordhan dropped a bombshell when he revealed in an explosive affidavit that there were “suspicious and unusual transactions” to the value of R6.8-billion in bank accounts of the Gupta family and their businesses. By citing ABSA, First National Bank, Standard Bank and Nedbank, as well as the Governor of the SA Reserve Bank, the Registrar of Banks and the Director of the Financial Intelligence Centre as respondents, Gordhan effectively challenged them all to provide evidence of why the Gupta accounts were closed.

On Wednesday, PowerFM reported that the Bank of Baroda, the only bank still willing to do business with the Gupta family, had found “suspicious activity” in the accounts. PowerFM said the Bank of Baroda was now facing a fine from the SA Reserve Bank, with which it is licensed.

Despite being advised to challenge the banks in the courts or to take the matter up with the banking ombudsman, the Guptas are desperate for political intervention. Despite being heavily compromised in the Public Protector’s State of Capture report and facing pressure from the ANC, its alliance partners, veterans, opposition parties and civil society, Zuma remains willing to use his presidency to do the Guptas’ bidding.

There is no indication that the ANC, the party that deployed Zuma to the presidency, would support such an inquiry. But the ANC is now irrelevant to Zuma. It would appear that he is only accountable to the Gupta family and could care less about the ANC and its mandate.

Sections of the ANC and the alliance are now trying to place their bets on the next leader as it is clear that Zuma is a lost cause. Trade union federation Cosatu, which was central to defending Zuma during his trials and carried him to the presidency, is the first organisation to come out firmly in support of a candidate.

As expected, the Cosatu central executive committee (CEC) announced on Thursday that they support Deputy President Cyril Ramaphosa to be the next leader of the ANC. In September, the federation flaked out of declaring their support for Ramaphosa due to internal divisions among the leadership and affiliates. But despite the ANC warning its alliance partner not to discuss its succession issues publicly, pressure from affiliate unions forced the CEC to make a pronouncement this time.

“We are mindful of the fact that we are not a voting structure of the ANC but we represent workers, who are members and supporters of the ANC. We also support the proposal that the ANC should explore the possibility of avoiding slates and contestations in its next conference. In this regard, we shall work to lobby and influence the ANC structures to support Comrade Cyril Ramaphosa as the next leader of the movement,” Cosatu said.

With Ramaphosa still facing legal challenges over his role in the Marikana massacre, it is of course a great irony that a workers’ federation is first out to bat for him. But Cosatu believes that Ramaphosa is “rooted” in the working class and would best represent the interests of workers and the poor. By coming out now in support of Ramaphosa, it is clear that Cosatu’s enchantment with Zuma is over. Further evidence of this was the federation’s decision to back the former Public Protector’s recommendation for a judicial inquiry into state capture.

“The meeting supported the call for a judicial inquiry to look into the alleged corruptive relationship between President Jacob Zuma and other Cabinet ministers and the Gupta family,” Cosatu said.

The federation’s general secretary Bheki Ntshalintshali said their support for Ramaphosa came with conditions. “Of course, there is no free lunch. People will engage to say this is what you must deliver,” he said at a media briefing on Thursday.

But this did not work out so well the last time they placed their bets on a presidential candidate. Despite claiming in the run-up to the ANC’s 2007 national conference in Polokwane that Zuma was the pro-poor, pro-worker candidate, his presidency did not exactly work wonders for the working class. Job losses have continued and poverty levels have deepened. Zuma also presided over the deadliest strike in post-apartheid South Africa.

Still, Cosatu is pledging its support for Ramaphosa without knowing what he stands for and what he intends his presidency to be about. The ANC’s method of electing leaders does not allow open campaigning so party structures have to discuss the suitability of candidates for the top six positions based on their past track record, not their plans for the organisation or the country.

Ramaphosa might or might not have a game plan by now but he certainly is playing coy, not wanting to appear ambitious or to undermine Zuma. But Zuma’s time is past and his focus now is only on his numerous legal problems and trying to sneak in the instructions given to him by the Guptas.

Ramaphosa and the other candidates wanting a shot at the top job – Gwede Mantashe told Bloomberg that there are six (unnamed) candidates in the running – will have to show their hands soon. Various factions are vying for power and could run ahead with the game if others hold back too long. This was certainly the consideration of some Cosatu affiliates when they pushed the federation to make its position clear, and declared their intention to lobby for Ramaphosa in ANC structures.

Still, it is all a gamble. There is no telling who the next ANC president will be and whether he or she would be loyal to the constituency that gets them elected. They too could end up in a state of capture – or selling their soul and their presidency to the highest bidder. DM