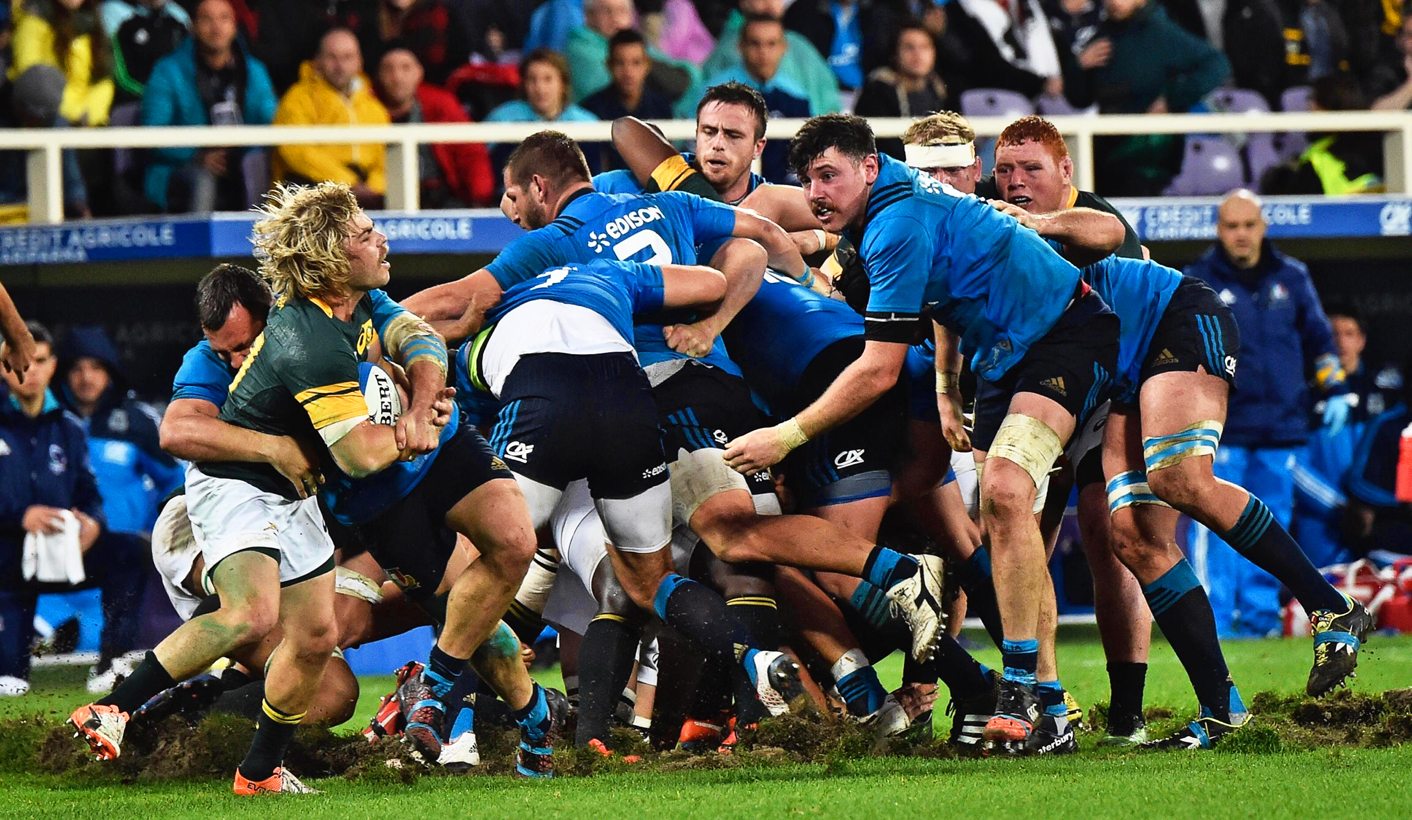 Italy pulled a Japan over the weekend, beating the Springboks in Florence in another nadir for the country’s national rugby team. They might as well go on strike next week because that’s how revolting they have been recently. By ANTOINETTE MULLER.

You did not need even a vague understanding of rugby to see just how terrible the Springboks were when they lost 20-18 against Italy over the weekend. As Sport24’s chief sports writer Tweeted: “My 11-year-old daughter just said she didn’t know Italy played rugby. She knows now.”

It seems the Boks didn’t know that Italy play rugby either. But then again, neither do the Boks these days. That bish-bash-bosh, rumble and tumble catastrophe can hardly qualify as rugby. And here we are again, another weekend, another nadir. Even if Wales were to run 10 tries past them next weekend it would not be a surprise.

Over the last 18 months it has never been unreasonable to expect the absolute worst from the Boks. It has become increasingly clear that there is something very, very wrong with how the set-up works (or rather, doesn’t) and South African rugby has been given one wake-up call after the other. So far, all of the talk has remained just that.

Many have lamented that this was “rock bottom” but this is far deeper than that. Japan was rock bottom. This is deep inside the Earth’s crust, being consumed by molten lava. Getting out of here will require astute leadership from all corners, something which has been sorely lacking in South African rugby over the last few months.

One pocket of that leadership group had to face the media after Saturday’s embarrassment. And while it would not have been unexpected for both captain Adriaan Strauss and coach Allister Coetzee to reach deeply for positive platitudes, they were nowhere to be found.

“We are not going to offer any excuses, what happened today was not worthy of what we stand for as a team and as a rugby playing country. We are in a dark place at the moment and we must get ourselves out of it,” said Strauss.

“No disrespect to Italy, but it’s not good enough for the Springboks to lose to Italy. I can only congratulate them on an outstanding victory,” the coach said.

“Compared to us, they played without any pressure on them while we looked like a team that lacked self-belief and had a fear of failure.

“I would say it’s the darkest moment of my coaching career. Definitely the toughest. But I don’t want to look at it emotionally now, because emotions are high,” the coach said.

To contextualise the defeat and its meaning in the greater sporting context in Italy, rugby is so insignificant compared to football in the country that the win wasn’t even the lead story on two of the country’s sport-only newspapers. It did crack the front page, but it was secondary to football-related stories. It contrast, in South Africa this is now very much a crisis and reams of column inches will be dedicated to deciphering how to fix this hot mess.

A large portion of the blame should be laid at Coetzee’s clay feet and that of his coaching staff, but let’s not gloss over the incompetence of the people who make decisions. Where have you heard of a person hosting an entire conference to dissect what is wrong with something and then buggering off to go and assist the opposition? That’s exactly what Brendan Venter did. Or rather, what he was allowed to do.

In the very same week that he was facilitating the indaba, Venter was announced as “defence consultant” for the Italians. Is that how much SA Rugby values its intellectual property or is that simply how utterly senseless the whole indaba was?

And while Venter is a wily old fox and has a history of pulling a fast one as a bridging coach, Italy are hardly the kind of team to strike fear into their opposition. A woeful World Cup and not a solitary win in the Six Nations might have had even the most cynical of Springbok rugby observers believing that surely not even they could engineer a way to cock this one up. And yet, here we are.

The Springboks are revolting and there is only one way to fix it: start from the bottom up. A new coach might bring some brief reprieve (and Coetzee surely can’t survive a loss against Wales, too), but the cycle of woe will only continue until the sport admits that its elitism and the conservatism on which its foundations are built has been the architect of its downfall. DM