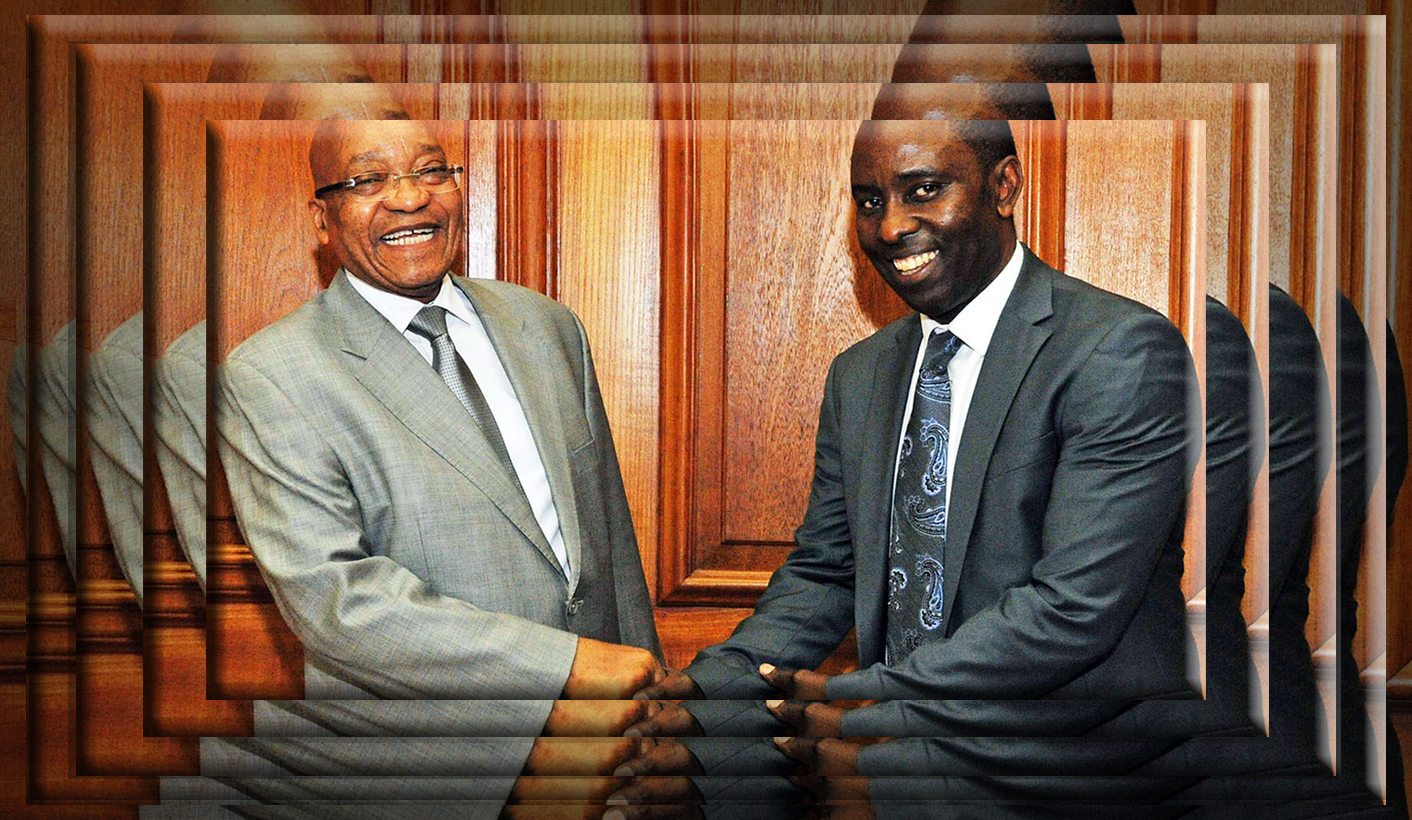 ANC stalwart Winnie Madikizela-Mandela on Thursday joined the procession of prominent people in society voicing concern about the state of the ANC and the country. “We cannot pretend we do not have problems and we cannot pretend things are not wrong,” she said before calling for “a whole layer of fresh leadership”. Part of the pretence is as a result of the constant dodging of questions about critical issues in the country. This week President Jacob Zuma fobbed off another parliamentary question on his contact with the Guptas. And the ANC will again let it pass. By RANJENI MUNUSAMY.

The ANC’s propensity to blame its problems on extraneous issues while refusing to confront obvious problems is rather startling. The following story illustrates the point.

On Friday, August 5, results from the local government elections two days prior continued to roll into the Independent Electoral Commission’s (IEC) results operations centre in Pretoria. That afternoon, Democratic Alliance (DA) leader Mmusi Maimane held an impromptu media briefing on the floor of the results centre to announce that his party would win the most votes in the Tshwane Metro. Maimane’s announcement the day before that the DA would win the Nelson Mandela Bay Metro had infuriated the ANC, with Secretary-General Gwede Mantashe accusing the IEC of “leaking” the results to the DA ahead of time.

It was quite ironic that it had been the ANC who, in fact, jumped the gun and called Nelson Mandela Bay Metro after claiming they had won the most wards. Deputy Minister of Communications Stella Ndabeni-Abrahams said in media interviews that the ANC had won 36 of the metro’s 60 wards and would therefore win the municipality. Later in the day, Maimane announced that his party had in fact won the majority, based on the DA’s polling calculations. But Mantashe, clearly upset by the results, lashed out at the IEC’s deputy chairman Terry Tselane in front of journalists, blaming the commission for Maimane’s announcement.

Maimane called the Tshwane results on Friday just before an IEC media briefing. At the briefing, I asked IEC officials to comment on Maimane’s announcement, in light of the accusations directed at them the day before by Mantashe. Tselane’s response was that each party had agents across the country sending information to their pollsters. He said the IEC could not stop parties making announcements based on their own information.

At the results ceremony the next day, Mantashe called me over. He said he believed that the question I asked had been “planted” by the IEC because he saw Tselane referring to his written notes when he responded. I told him that this had been an obvious question to ask in light of how he had attacked the IEC in front of us the day before. I reminded him of how I always ask questions at ANC media briefings that annoy him, all of which I am capable of thinking up myself. I also reminded him that he also writes down questions during media briefings and refers to these notes when he answers questions.

It seemed like an utterly bizarre thing to complain about anyway, considering the ANC had just dropped electoral support by eight percentage points and had lost control of several municipalities they previously controlled, including three metros. But Mantashe would rather fixate on a possible conspiracy between the IEC and the DA, helped along by journalists’ questions, than deal with the causes of the ANC’s disastrous performance. Weeks later, the ANC is apparently still bugging the IEC about the issue.

What the ANC is not bugging anyone about is Mosebenzi Zwane’s abuse of his ministerial position and attempt to misrepresent Cabinet to further the agenda of his patrons, the Gupta family. Zwane announced earlier this month that Cabinet had decided that President Jacob Zuma should appoint a judicial inquiry into South Africa’s banks as a result of their closure of the accounts of the Guptas’ businesses. Zwane’s statement was a blatant lie, refuted by the Presidency.

The ANC called for Zuma to discipline Zwane but has done nothing about their deployee’s flagrant abuse of his position. Zuma told Parliament he was “engaging” with Zwane but has done nothing so far about his minister acting against the country’s interests and wilfully lying to the nation. Zwane remains in his position as an ANC Member of Parliament and as a minister, free to continue dancing to the tune of his masters, the Guptas.

On Thursday, News24 revealed that the Guptas’ PR firm Bell Pottinger knew about Zwane’s recommendations for a judicial inquiry at least seven weeks before he announced them as a Cabinet decision. News24 reported that the UK-based spin doctor agency tried to leak a copy of the document to the media as early as 15 July.

Bell Pottinger has denied that their source is either the Guptas or Zwane. But on whose behalf would they be acting except for the people who pay for their services? (The same of course applies to Zwane.) And what interest would Bell Pottinger have in the matter except to further the interests of their clients?

These are questions the ANC should also be asking as it is clear that their deployee in the Ministry of Mineral Resources is no longer representing their mandate but that of an outside party. If the ANC was worried about things being “planted” in the media, here is a real case.

Will the ANC be demanding answers from Zuma, Zwane, the Guptas or Bell Pottinger?

The ANC will also not ask Zuma why he did not answer a parliamentary question directly about whether he visited the Gupta family compound in Saxonwold in Johannesburg on Sunday, September 20, 2015, ahead of his decision to appoint Zwane as Minister of Mineral Resources. Zuma responded in a written reply to a question from the DA’s James Lorimer about the visit to the Guptas and nature of the discussions in the most bizarre way.

What does this have to with the answer Zuma needs to give to Parliament – which would either be “Yes, I was at the Gupta residence on that date” or “No, I made no such visit to the Gupta residence”? How does the Public Protector’s investigation supersede the president’s constitutional obligations to be accountable to Parliament? Because this question was responded to in written form, the opposition cannot pose follow-up questions to the president.

But his party can.

Months after the ANC national executive committee decided to can its probe into “state capture” – parlance for the Guptas’ involvement in state affairs – Mantashe said this week that the party needed to have a “candid debate” on the matter. Speaking at the South African Clothing and Textile Workers Union’s national congress, Mantashe said the issue needed to be confronted to “save our movement”. But if the ANC cannot ask questions of people who have been “captured”, how would this “debate” be conducted? And with him being the one to announce the closure of the ANC investigation into state capture due to only one written submission being made, how does he envisage the matter can be resurrected?

When Winnie Madikizela-Mandela spoke about the state of the ANC on Thursday, she asked: “Where did we go so wrong?” The answer is complex, of course. But the fact that the ANC is powerless over its deployees in government, from the president to a ward councillor, is a big contributing factor.

“We cannot pretend we do not have problems and we cannot pretend things are not wrong. The kind of introspection we need would need a whole layer of fresh leadership,” Madikizela-Mandela told journalists.

But when the ANC is consumed with conspiracies – the latest of which is that there is an “ulterior motive” behind the latest wave of student protests – how does it even begin to deal with its leadership crisis? Eight years ago this week, the ANC made an earth-shattering decision to recall a sitting president without giving him an opportunity to respond to their accusations. Now it seems the ANC is incapable of facing up to its crisis or asking questions of those perpetuating it.

The reason the ANC cannot confront the issue of state capture is that the organisation has effectively surrendered to the captors. The ANC is powerless to break the grip of the Guptas and their agents in the state, and that fact was never as obvious as it is now. DM