Rio 2016: Ethiopia’s Feyisa Lilesa gets a silver for running – and a gold for bravery 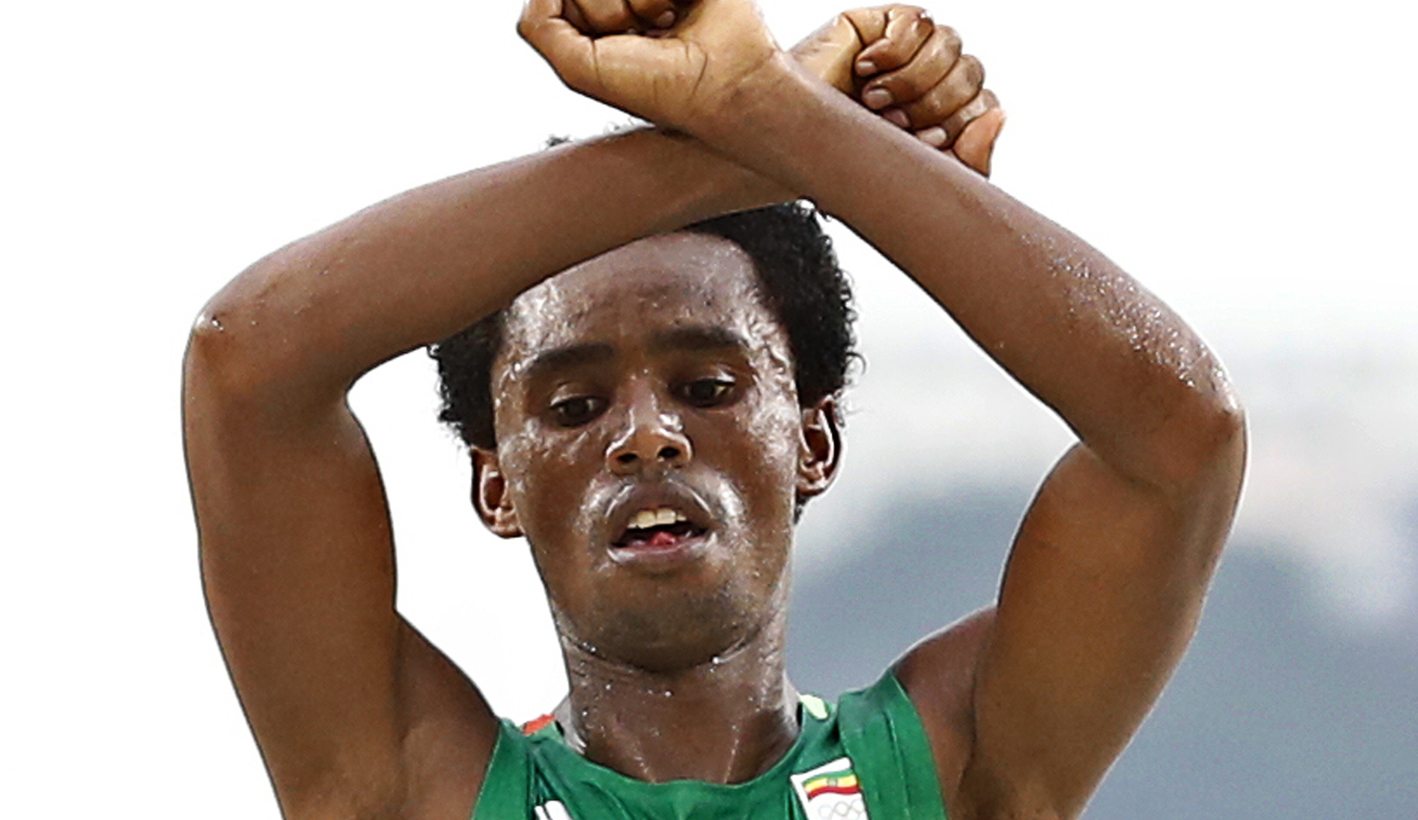 In Ethiopia, long distance runners are heroes. But Feyisa Lilesa must be the most heroic of the lot. The marathon runner won a silver in Rio on Sunday, but it is what he did after he crossed the line that will be remembered. By SIMON ALLISON.

If the Ethiopian government needed any more proof that censorship doesn’t work in the 21st century, then marathon runner Feyisa Lilesa provided it on Sunday.

As he crossed the finish line in the final event of the Rio Olympics, Lilesa crossed his arms and raised them above his head in the shape of an X. The gesture symbolises chains, and has come to represent the wave of anti-government rallies in Ethiopia over the last nine months – protests that have left more than 500 dead, by conservative estimates, and many more imprisoned, thanks to a brutal government crackdown.

Ethiopian state TV carried the live images, but didn’t repeat them. In later broadcasts, it was as if Lilesa’s political protest hadn’t happened at all.

But these days, it doesn’t really matter what state TV does or does not broadcast. Within minutes, Lilesa’s photo was all over Facebook. The video was shared between smartphone users. It was pored over by patrons in restaurants, discussed between friends over macchiatos in corner cafes, and debated with strangers in online forums.

Lilesa had gone viral. And so had his message.

In a post-run press conference, the marathon runner – who won silver, incidentally – explained himself:

The Oromos have long been marginalised in modern Ethiopia. Despite being Ethiopia’s largest ethnic group, they are also its least powerful, and are often found on the wrong side of the country’s growing wealth inequalities. In November last year, region-wide protests against plans to expand the capital, Addis Ababa – which lies in the middle of Oromos’ province – were met with a violent response from state security services, who indiscriminately fired on protests, killing hundreds. But the protests worked, and the Addis Ababa expansion plan was shelved.

In the last month, further protests have erupted, this time not just in Oromia, but also in Amhara Region, home to Ethiopia’s second most populous ethnic group. This time, anger has been directed at the political domination of a third ethnic group, the Tigray, and at the ruling coalition itself. In what is effectively a one-party state, these protests represent a serious threat to the government, which has again reacted with brutality and force.

No wonder Lilesa is fearing for his life. He said:

“I have relatives in prison back home. If you talk about democracy they kill you. If I go back to Ethiopia maybe they will kill me, or put me in prison.”

Or maybe not. In comments to media, Ethiopia’s information minister Getachew Reda promised that Lilesa “will not face any problems for his political stance. After all, this is an athlete who secured a silver medal for his country”. Reda, a well versed spin doctor, will know that the damage is already done – and, now that Lilela is in the global spotlight, any punishment will only do more harm to Ethiopia’s reputation.

That global spotlight might work in others’ favour, too. With the world watching, and precious aid money on the line, Ethiopia may be forced to moderate its response to further protests. More killings will only underline Lilesa’s point, and put huge pressure on the international community to intervene in some way – whether in the form of condemnation, sanctions, or a withdrawal of aid.

Whatever happens next, Lilesa himself has joined that small pantheon of athletes who realise that sport is about more than running and jumping and kicking a ball. It is an elite group that includes the likes of Tommie Smith and John Carlos, who raised their fists in that iconic black power salute in 1968; the Zimbabwean cricketers Andy Flower and Henry Olonga who wore black armbands in a match against Namibia in 2003, to symbolise the death of democracy in Zimbabwe; boxer Muhammad Ali, whose outspoken opposition to the Vietnam War cost him his titles and his fighting licence.

Like them, and at great personal risk, Lilesa has used his 15 minutes of fame to bring the world’s attention to an issue far greater, and more urgent, than himself. While no one knows whether his message will have any lasting impact, we do know that it’s not one that Ethiopia is able to ignore – or censor. DM

Photo: Feyisa Lilesa of Ethiopia celebrates while crossing the finish line to take the second place in the men’s marathon race of the Rio 2016 Olympic Games Athletics, Track and Field events at the Sambodromo in Rio de Janeiro, Brazil, 21 August 2016. EPA/Diego Azubel