The Dissident, the Despot & the Divine: A tale of two Zimbabwean churches 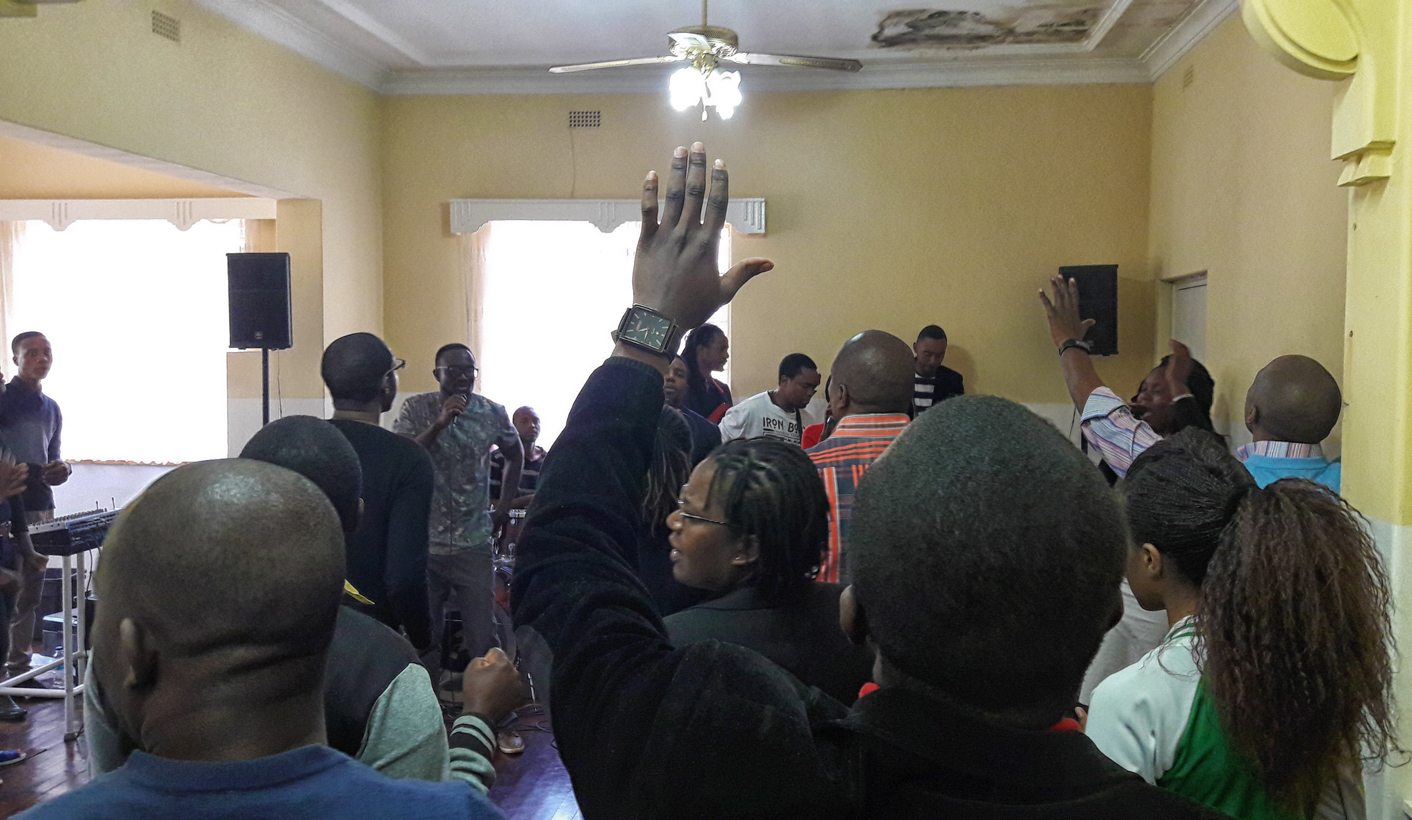 After one of the most turbulent weeks in Zimbabwe’s history, SIMON ALLISON goes to church in Harare, and finds the line between God and politics has blurred beyond recognition.

And on the seventh day, Zimbabwe rested. After a tumultuous week, the streets of Harare are empty of traffic, troubled by neither protesters nor police. There is little to suggest that we are in the middle of an epochal period of Zimbabwean history; that we appear to be at the beginning of the endgame for President Robert Mugabe.

The city’s churches, however, are full. This is a deeply religious country, a deeply Christian country, and Sunday is the day to worship, and to be seen to worship. Nowhere is this latter aim more obvious than at the Church of Celebration Ministries International, in rich, leafy Borrowdale, where government ministers, ruling party apparatchiks and well connected businessmen gather to praise their God, or themselves, or something.

If Zanu-PF has a spiritual home, it is here, in this luxurious, glass-clad cathedral to ostentation, constructed as the rest of Zimbabwe sunk into the economic quicksand. Entirely tone deaf, the church celebrates this juxtaposition in bold text on its website:

“During the worst economic inflation the world has seen in recent times, the church paid cash for and built a magnificent building which they called Celebration Centre. Today the building stands as a testimony of God’s limitless awesome power.”

Or maybe it stands for something else entirely. There’s something obscene about the wealth in the room, something grotesque about the shiny Range Rovers in the car park and the shinier suits that cling to the high-rollers who have between them driven Zimbabwe over yet another economic precipice.

I speak to a young pastor, who squirms when I ask him about the congregation. “It’s true, it’s mostly rich people that come here. It’s 90% rich. It’s not ideal, but we can’t just turn away rich people at the door.”

But the popularity of Celebration Church is not just some happy accident. It sells the ‘Prosperity Gospel’ hard, the idea that God financially rewards those who please Him; and its corollary, which is that the wealthy must have pleased Him the most. By this logic, to display your riches is to prove your devoutness. Extravagance is piety, and so what if the rest of the country lives on less per day than it costs to buy a biscuit from the church canteen?

Of course, most of these congregants don’t need biscuits. Their hands are already deep inside the jar. What they need is a higher authority to condone their greed, and the Celebration Centre provides it.

On the other side of town, in another leafy suburb, I find a humbler affair. About 40 people are crammed into the bare living room of an old colonial villa, the wooden floors scuffed by stiff metal chairs and the paint chipping at the edges.

This is His Generation (motto: ignite, establish, unleash), a hitherto unremarkable entry in the overflowing registry of Zimbabwean Houses of God. The mostly middle-class worshippers are dressed simply, and sing and clap and dance with the energy of youth. The normality of the scene masks the fact that this church is anything but normal; that it is, for better or worse, the epicentre of a new resistance movement that is threatening to topple a decades-old dictatorship.

Pastor Evan Mawarire, who founded His Generation with his wife in 2010, is not here today. But Pastor Samantha, his wife, is.

“It’s been an interesting week,” she deadpans, addressing the congregation. She looks remarkably calm for someone whose husband was jailed, released and forced into exile, all within the space of seven days. “But then weeks with God often are.”

She doesn’t speak for long, and in true biblical fashion, she uses metaphors rather than saying exactly what’s on her mind. But her message is clear. “There are many storms, and there will be more. But even though there is fear and destruction you had never anticipated, it doesn’t mean you are in the wrong place. What you’re going through, in God’s scheme, it’s okay,” she says. Her troubled flock is soothed.

In April this year, Pastor Evan recorded a Facebook video. In it, visibly distressed, he described his pain at how the government had defiled and corrupted the promises implicit in the Zimbabwean flag; and he spoke, with all the eloquence of a preacher-man, of how to restore that flag to its former glory. His message touched a chord: #ThisFlag became an online sensation, and then it bridged the digital divide, sparking protests in solidarity across the country. These demonstrations, coupled with a tanking economy, have plunged Zimbabwe into political crisis.

Inevitably, Pastor Evan was arrested. But extraordinary, unprecedented demonstrations outside and inside the Magistrate’s Court where he appeared last Wednesday played a major role in forcing the magistrate to uphold the letter of the law. He skipped the country shortly after his release, after receiving information – to no one’s surprise – that his life was in danger.

Pastor Keith Kuhudzai leads the Sunday sermon in Evan’s absence. We had spoken previously, at the Magistrate’s Court. “Evan has always been a person who stands for what’s right. He always was a guy who was passionate about this country. He’s always been someone who’s been like that,” said Kuhudzai.

Kuhudzai said the church is united behind Pastor Evan, and praying for him, although he does acknowledge the “mixed feelings” of some church members. And who can blame the Doubting Thomases: suddenly, almost accidentally, Pastor Evan has turned their Sunday morning worship into the centre of a nationwide political protest, in a country where political protests are incredibly dangerous.

But the line between politics and religion has always been blurred. Mugabe’s regime has long cloaked its excesses in the name of God, and the Christian establishment, in all its denominations, has often been a willing participant in the maintenance of his power. That this power should be eroded by an upstart pastor from a no-name-brand church seems a fitting riposte.

It’s too early to say whether these really are Mugabe’s last days in charge. In this tale of two Zimbabwean churches, the last chapter has yet to be written. Whatever happens, Zimbabwe could use a little divine assistance. DM