The simple genius of Zimbabwe’s #ThisFlag protest, and the man who started it 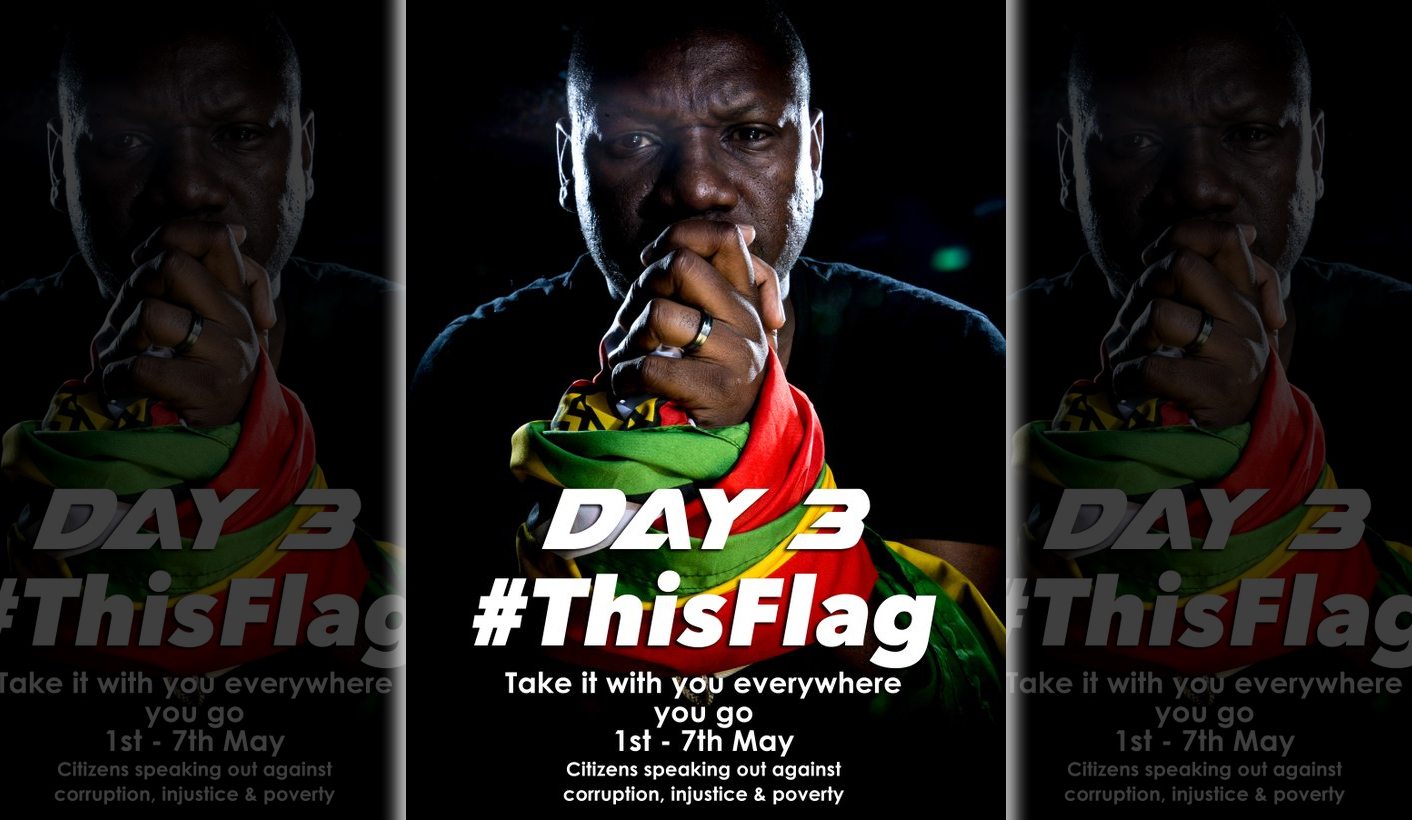 Pastor Evan Mawarire started the most subversive protest movement in Zimbabwe’s recent history by accident. He was fed up with the state of his nation, and decided to share his frustrations online. Turns out that he’s not the only frustrated Zimbabwean. In an in-depth interview, Mawarire tells SIMON ALLISON why Zimbabwe is broken – and how citizens can start fixing it.

The day that he lost it, the day that he’d finally had enough, Pastor Evan Mawarire was sitting at his desk at his office in Harare. The 39-year-old Zimbabwean is a professional master of ceremonies – his church doesn’t pay him a salary – but work has been scarce in this tough economic climate, with little sign of things getting any better. So bad, in fact, that he didn’t know if he would be able to keep his children in school.

“I’ll be honest with you, the day it happened was a really tough day for me. I was thinking of ways I could get more money for school fees, or I could borrow money, but it just wasn’t happening. I was packing to go home,” said Mawarire, in an in-depth telephone interview with the Daily Maverick.

And then something snapped. After decades of struggling to make a living and keep his family safe, of quietly disappearing into the background like upstanding citizens are expected to by the current regime, Mawarire decided that he would disappear no more.

“I had that moment where it just became clear, wait a second, this country has gone completely broken because people like me have stayed quiet,” he said.

Without much thought or consideration of what would come next – never mind a script – Mawarire grabbed a Zimbabwean flag and put it around his neck. He balanced his camera on the desk, put on a little mood music, and vented.

“When I look at the flag it’s not a reminder of my pride and inspiration, it feels as if I just want to belong to another country. This flag. And so I must look at it again with courage and try to remind myself that it is my country,” he tells the camera. His head isn’t completely in the frame, and the focus is slightly off, but it doesn’t matter: Mawarire’s pain is obvious, and conveyed with such eloquence and feeling that, by the end of his four-minute monologue, you can’t help but feel it too.

Mawarire posted his video online, with the comment: “?#?ThisFlag. If I have crossed the line then I believe it was long overdue. I’m not a politician, I’m not an activist…just a citizen #ThisFlag.”

The video attracted hundreds of hits. Then thousands. Then tens of thousands. In Zimbabwe’s relatively tiny social media bubble, Pastor Evan’s message hadn’t just got viral, it had gone full-on pandemic. The pent-up frustrations of Zimbabwe’s hashtag generation had found their trigger – and, more important, their hashtag.

#ThisFlag took on a life of its own. Ordinary people started posting pictures to Mawarire’s Facebook account, of themselves wrapped up in the Zimbabwean flag. Others wrote in to tell Mawarire that he had somehow expressed the very words and feelings that they had kept locked up in their heads for too long, and that he wasn’t alone.

“Surprised is not the word. I was shocked by the reaction. It was massive, like an avalanche. It was from everywhere,” said Mawarire.

He reacted to all the enthusiasm by declaring five days of digital activism under the #ThisFlag banner, which he then, by popular demand, extended to 25 days. The last day is 25 May, Africa Day, although Mawarire says that this is just the start – although he’s not sure of what exactly.

“The 25th is not when we stop but when we start, where we start to push them to accountability. The last 25 days have been us waking up, us knowing that we all have these frustrations. Going forward I’d love to see us more organised, to put a strategy in place as citizens to continue to expose their failings… A lot of people have got to a place where, like me, they didn’t know what to do, but they really just want Zimbabwe to work,” he said.

Zimbabwe, of course, does not work. Belying his age and ailing health, President Robert Mugabe clings on to power with extraordinary energy, stifling dissent and opposition at every turn. The economy is running out of precious US dollars, grinding to a halt as a result, and everyone knows the government’s new plan to resurrect the Zimbabwean dollar will only make things worse. Unemployment is skyrocketing, inflation is getting out of control, corruption is rife and the country’s once-proud health and education sectors are in tatters.

Pointing out these or any other of the country’s flaws is a dangerous business, however. More than a year ago, activist Itai Dzamara, a prominent critic of Mugabe’s regime, was abducted by suspected state security agents. He has not been seen since. Mawarire knows that he too is at risk.

“I couldn’t lie to you to say that I feel completely safe. I don’t have enough resources to hire a security team or equipment. The only safety I have are my fellow citizens, the people who know me, the people around me. People have said that I could leave the country but I can’t. This is home. Everything I have is here. I could leave but then what?

“Even my parents have sat me down and said listen, this is a very dangerous thing you’re getting involved in. But this is part of the problem, we live with this every day in Zimbabwe. It’s been very difficult to speak out, and because it’s so dangerous we warn each other off speaking, we put the fear into each other. State security doesn’t have to tell people not to talk, we do it for them. I’m not brave, I’m scared, but the bottom line is I’ve had enough and I can’t do it any more,” he said.

One night, Mawarire received an anonymous phone call from a persistent stranger. Using the pastor’s words against him, the stranger told Mawarire that “this flag around your neck can strangle you, and if you carry on like this it will strangle you”. Mawarire was chilled. “That was the darkest phone call I have ever received. I will never forget that. But I tried not to show fear, so I told him if he was going to strangle me, he would be there strangling me already, not on the phone.”

Officially, the government has mocked and belittled Mawarire and his accidental campaign. On Twitter, higher education minister Jonathan Moyo, in his inimitable style, dismissed the whole movement as nothing more than a “pastor’s fart in the corridors of power”, and implied that Mawarire was using the campaign to make money and encourage attendance at his church. Moyo described #ThisFlag supporters as nameless and faceless trolls, and initiated his own social media campaign, #OurFlag, which hasn’t been taken up with quite as much enthusiasm.

Mawarire fiercely maintains that he is nonpartisan with no ties to any political parties. And he’s determined to keep #ThisFlag neutral, saying that politicians from across the political spectrum have failed Zimbabwe – not just the ruling Zanu-PF.

But this hasn’t stopped opposition parties from capitalising on the sudden wave of discontent that Mawarire’s movement has generated. Last week, two opposition MPs were ejected from Parliament for wearing the Zimbabwean flag around their necks. Imagine that: it is now an offence to display the national flag in the national assembly.

More than anything else, this incident illustrates the sheer absurdity of Zimbabwean politics – and the simple genius of Mawarire’s protest. In reclaiming the flag, #ThisFlag has appropriated the state’s most potent symbol. They have seized the one icon that the state can’t ban or suppress, and made it their own. The flags that fly above government buildings, the flags that are pinned on the chests of government officials, the flags that fly on the bonnets of President Mugabe’s motorcade, these are all now subversive acts that the regime cannot ignore – or does so at its peril.

Mawarire is insistent that he is not pushing for revolution, or regime change, or anything like that. He doesn’t want the inevitable violence and bloodshed on his conscience. What he does want to do, he says, is to break the fear that keeps Zimbabwe’s citizens in line; to give Zimbabweans the space and the courage to confront their problems and hold their government to account. Oh, and one more thing – to pay his children’s school fees. DM