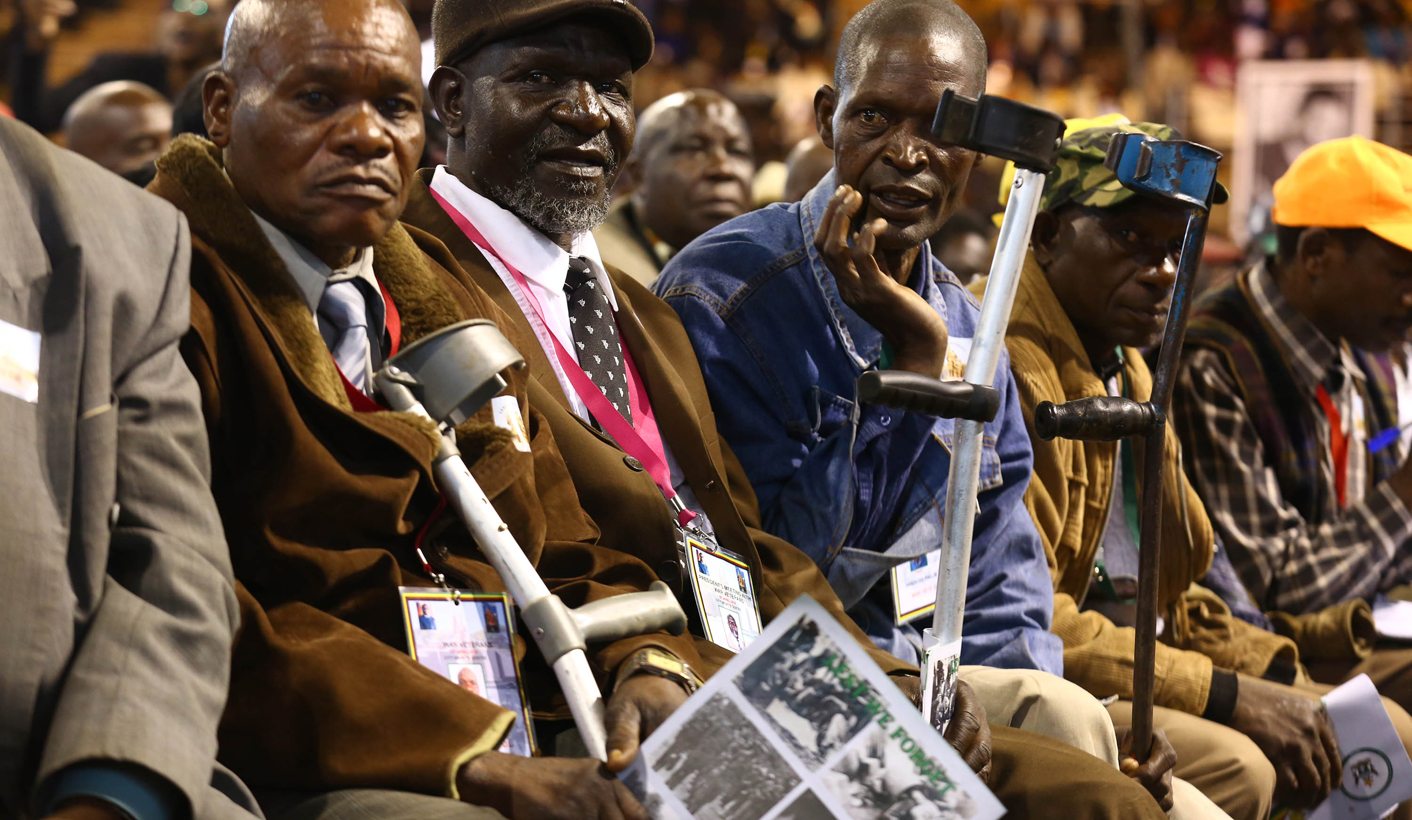 Over the years, Zimbabwe’s “war veterans” have been among President Mugabe’s most effective – and violent – henchmen. Now, however, they find themselves on the wrong side of his wrath. But can Mugabe really afford to alienate his old allies? By SIMON ALLISON.

Last week, in an extraordinary central committee meeting of the ruling party, Robert Mugabe identified a new enemy. This time, it was Zimbabwe’s infamous war veterans that have fallen foul of the Zimbabwean president – despite having done much of his dirty work over the last few decades.

Mugabe, apparently without irony, told the Zanu-PF top branch that he was tired of war veterans interfering in politics.

“That is dissident behaviour and we will not allow it. It is not your business to talk of who should succeed the president and worse still I am stunned you threatened that unless your wish is fulfilled, there shall be bloodshed.”

Mugabe’s comments came shortly after the war veterans’ association came out in support of Vice-President Emmerson Mnangagwa to succeed Mugabe (it is still unclear whether this supposed endorsement comes from the association as a whole, or from one of several factions within it).

“All fighters, all those who went to the struggle are in a queue to rule and the norm is, seniority tells who is next in line. So next in line from those who took part in the struggle, is Mnangagwa. There is nothing sinister about that; it is just a matter of principle,” said Douglas Mahiya, spokesman for the Zimbabwe National Liberation War Veterans Association.

From Mugabe’s perspective, this was disloyal on two fronts: not only is all talk of succession discouraged, but Mugabe currently appears to be favouring his wife Grace Mugabe to follow in his footsteps, not Mnangagwa.

Mugabe has long used war veterans, under the banner of the veterans’ association, to further his own political ends. They have been integral in the drumming up – or enforcing – of popular support for Mugabe’s regime. They have, at times, shown a violent streak, and have been implicated in assaults, arson attacks, and torture. War veterans were at the forefront of the infamous “land invasions” in the early 2000s, which forcibly displaced Zimbabwe’s white farmers. Some also occupy key positions in Mugabe’s regime, both in government and state-owned enterprises.

The war vets are, in other words, a powerful force, but neither their power nor their historical loyalty have earned them any lenience from the president.

In fact, the opposite is true. In Zimbabwe’s political lexicon, the word “dissident” carries special meaning. This was the word used by Mugabe to describe the thousands of mostly Ndebele-speaking civilians slaughtered by government forces during the Gukurahundi massacre in the 1980s. By using the same word to describe the supposedly disloyal war vets, Mugabe is threatening to wipe them out in the same way.

“The dissidents tried it, they were war veterans and you know what happened,” said Mugabe, as if to underscore the threat.

Opposition parties have condemned Mugabe’s language, and in particular his none-too-subtle reference to Gukurahundi. “That Mugabe wants to use the barbaric massacre of innocent civilians, children and pregnant mothers disembowelled in front of their now traumatised, impoverished and pauperised offspring to scare off disgruntled war veterans is psychopathy taken too far,” said the newly-formed Zimbabwe People’s Front in a statement.

Welshman Ncube, leader of a faction of the Movement for Democratic Change, said: “(Mugabe’s) mad rant… was a stark reminder of the sheer evil, hate and selfishness that drove Gukurahundi whereby some people like Mugabe believed they were gods and could dictate who should live or be killed.”

Mugabe’s public falling out with his one-time allies takes place in the context of increased faction fighting within the ruling Zanu-PF, as potential leaders attempt to manoeuvre themselves into poll position to succeed Mugabe. Biology dictates that the 92-year-old president does not have all that much longer in office.

Vice-President Mnangagwa leads one faction, with significant support from within the powerful security sector; while another, known as the G40, is comprised of younger politicians and includes heavyweights such as Grace Mugabe and higher education minister Jonathan Moyo.

“Having spent much of his political career relying on war vets, who have played a critical role in the development and retention of Zanu-PF hegemony, it’s interesting that Mugabe has thrown them under the bus. It’s part of the political brinkmanship that’s going on inside Zanu-PF, but it fundamentally ratchets up the stakes,” said Piers Pigou, senior consultant for the International Crisis Group.

Pigou warns that it could backfire on Mugabe, however.

“Mugabe’s statement was exceptionally confrontational, and I would argue irresponsible, in light of the insecurities that accompany the factional politics and the desperate economic conditions, which are unlikely to be improved by the response around introducing bond notes. At a time when there is need for calm, stability and political vision, in terms of navigating extremely difficult political and economic waters, Mugabe betrays that he is a man who is losing his grip on the situation.” DM

Photo: Some of the former Zimbabwe liberation war fighters who were injured during the Liberation war attend a meeting with their patron and President Robert Mugabe at the City Sports Centre in Harare, Zimbabwe, 7 April 2016. Zimbabwe has about 34,000 living war veterans and it is the first time ever that Mugabe has held a meeting of this nature which was meant to discuss corruption and the welfare of the war veterans. EPA/AARON UFUMELI