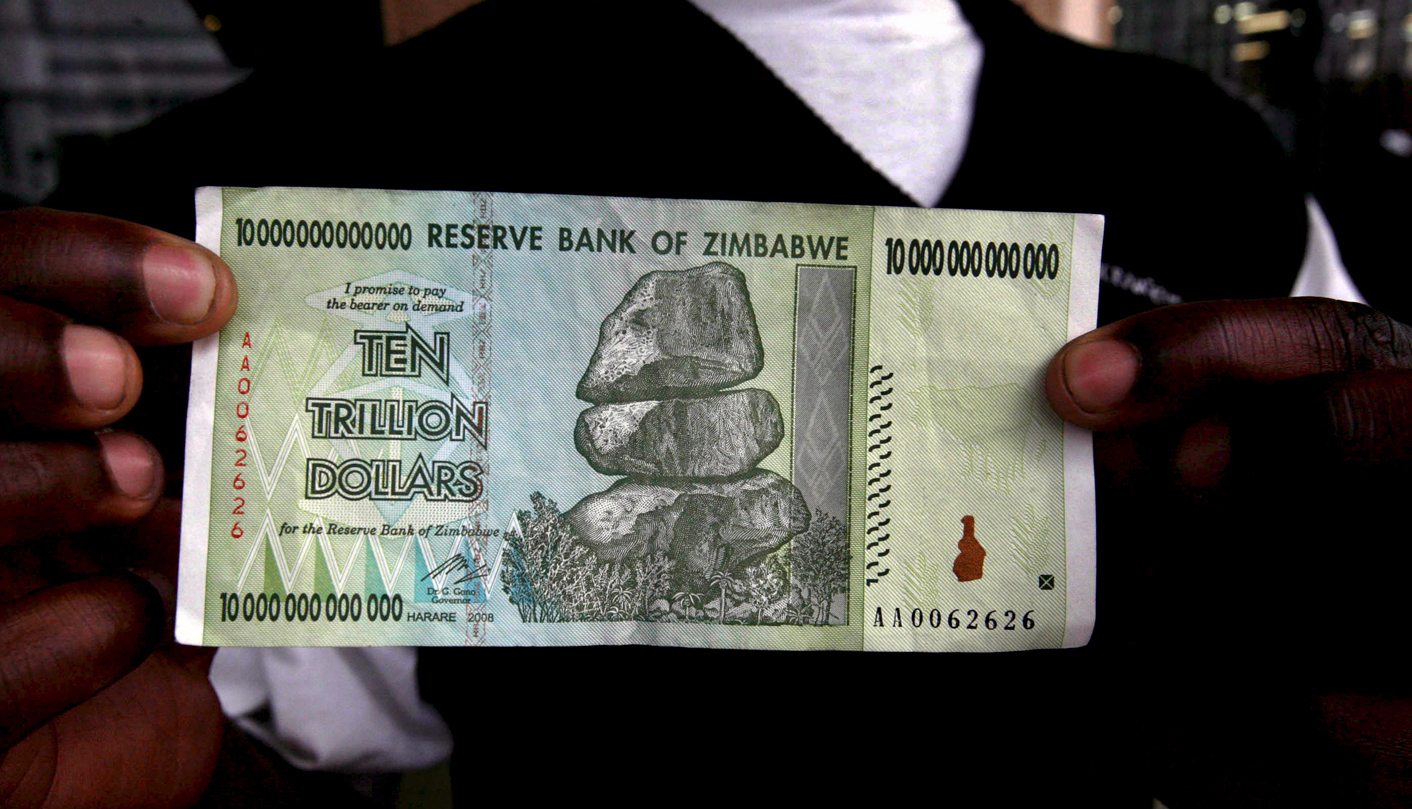 Zimbabwe has a problem. Well, it has a few problems, but this time we’re not talking about President Robert Mugabe and his merry band of kleptocrats – although they are, as always, the reason that the country is in this mess to begin with.

This time we’re talking about the economy, and specifically the currency. For the last seven years, since the Zimbabwean dollar spiralled out of control – we stopped counting at 500-billion percent inflation – Zimbabweans have been trading instead with US dollars and South African rand. In recent years, given the rand’s own well-publicised instability, Zimbabweans have generally preferred greenbacks, and who can blame them?

But the US dollars are running out. Zimbabwe doesn’t manufacture very much, so it needs to import lots of stuff. To pay for that stuff, they must use their precious US dollars. Last year, Zimbabwe spent $5.5-billion dollars on imports, compared to just $2.5-billion on imports – a difference of $3-billion.

That $3-billion (and billions more from earlier years) is no longer in the country, which means there is a shortage of cash. This makes it hard to draw money from ATMs; tough to pay staff, and difficult, if not impossible, to keep paying for all those imported goods (which includes everything from basics such as maize and grain to crystal chandeliers and fancy cars for the elites).

To keep the economy running, Zimbabwe needs to get cash back into the country – and quickly. To do this, it has a few options – none of them good.

One option is to start exporting stuff, to earn those dollars back. But decades of economic mismanagement means Zimbabwe doesn’t have much of anything that anybody else wants. Its farms are not as productive as they used to be, its industrial capacity is small-scale, and its major natural resource – the diamonds in the Marange field – are implicated in so many human rights abuses that legitimate traders refuse to buy them.

Another option is to get a loan from somewhere. The usual suspects would be the World Bank and the International Monetary Fund (IMF), but they are reluctant to work with Zimbabwe. In 1999, both institutions suspended their relations with Zimbabwe after disagreeing with the government’s economic policies (and they were right: it was these same policies that caused the collapse of the Zimbabwean dollar). While the IMF has now returned to Zimbabwe, and is in discussions with the government, any new loan is still contingent on substantive economic reform. Fortunately, there are other lenders, and the government in January secured a $200-million loan from the African Import Export Bank to help it buy maize. This helps, but is not nearly enough to redress the import deficit, or to get cash back into the economy.

There’s a third option, of course. The last time Zimbabwe was in this kind of position, it did something few economists would recommend: it simply printed more money, with disastrous consequences. The sudden, poorly-managed influx of Zimbabwean dollars into the economy was the direct cause of the economy-wrecking, poverty-inducing, development-stunting hyperinflation that followed. Surely, surely, Zimbabwe would not go down this route again, no matter how severe the cash crunch?

“It does look like they’re trying to introduce a new Zim dollar through the back door,” said Russell Lamberti, an economist, in an interview with the Daily Maverick. Along with Phillip Haslam, he is the author of perhaps the seminal text on the Zimbabwean dollar’s precipitous decline, When Money Destroys Nations: How Hyperinflation Ruined Zimbabwe, How Ordinary People Survived, and Warnings for Nations that Print Money.

As such, Lamberti is probably best placed to understand what this new development means for Zimbabwe. His assessment is withering. “It doesn’t seem very different to me from creating money from thin air, or just printing money. It just seems to be that this is a desperation play, but it hasn’t been thought through from a monetary perspective and is dead in the water.”

Lamberti says there’s almost no chance of the new bond notes holding their value, because they are not backed by anything real. Traders won’t be able to use them to pay for imports, nor will they be able to exchange them for US dollars at the reserve bank – because the reserve bank doesn’t have any US dollars left. As a result, traders are unlikely to accept the new bond notes as payment from customers for imported goods – or, if they do, it will be at a hefty premium, possibly beginning the steep inflation cycle all over again.

Tendai Biti, the former finance minister in Zimbabwe’s government of national unity and the man credited with rescuing the economy in the wake of the hyperinflation disaster, is just as damning: “The return of the Zimbabwean dollar marks the gross admission by this regime that it has failed and failed in absolute terms and that it will drag everyone along in the plunge to the abyss that now awaits this economy,” he said in a statement.

“It is a cynical, disrespectful and contemptuous move that has absolutely no logic, sense or justification on any rational ground whatsoever… It is a decision that will see many of the remaining companies reach breaking point and simply shut down. Few are prepared to relive the nightmare of the meltdown period of 2007 and 2008.”

Ouch. But Governor Mangudya maintains that his critics are wrong – and have misunderstood his policy. “We have no hidden agenda,” he said.

Mangudya said the bond notes are intended to incentivise exports – and will only be distributed to exporters, in the form of a grant based on the size of the export. This is supposed to encourage local producers to make products which can be sold abroad, thereby bringing real US dollars into the country.

This theory, however, breaks down if the new bond notes decrease in value, thereby diminishing the value of the incentive. As much as Zimbabwe needs more exports, this policy seems unlikely to make exports more attractive. And as much as the country needs more cash in its economy, the bond notes – a new currency by any other name – simply aren’t going to deliver. DM