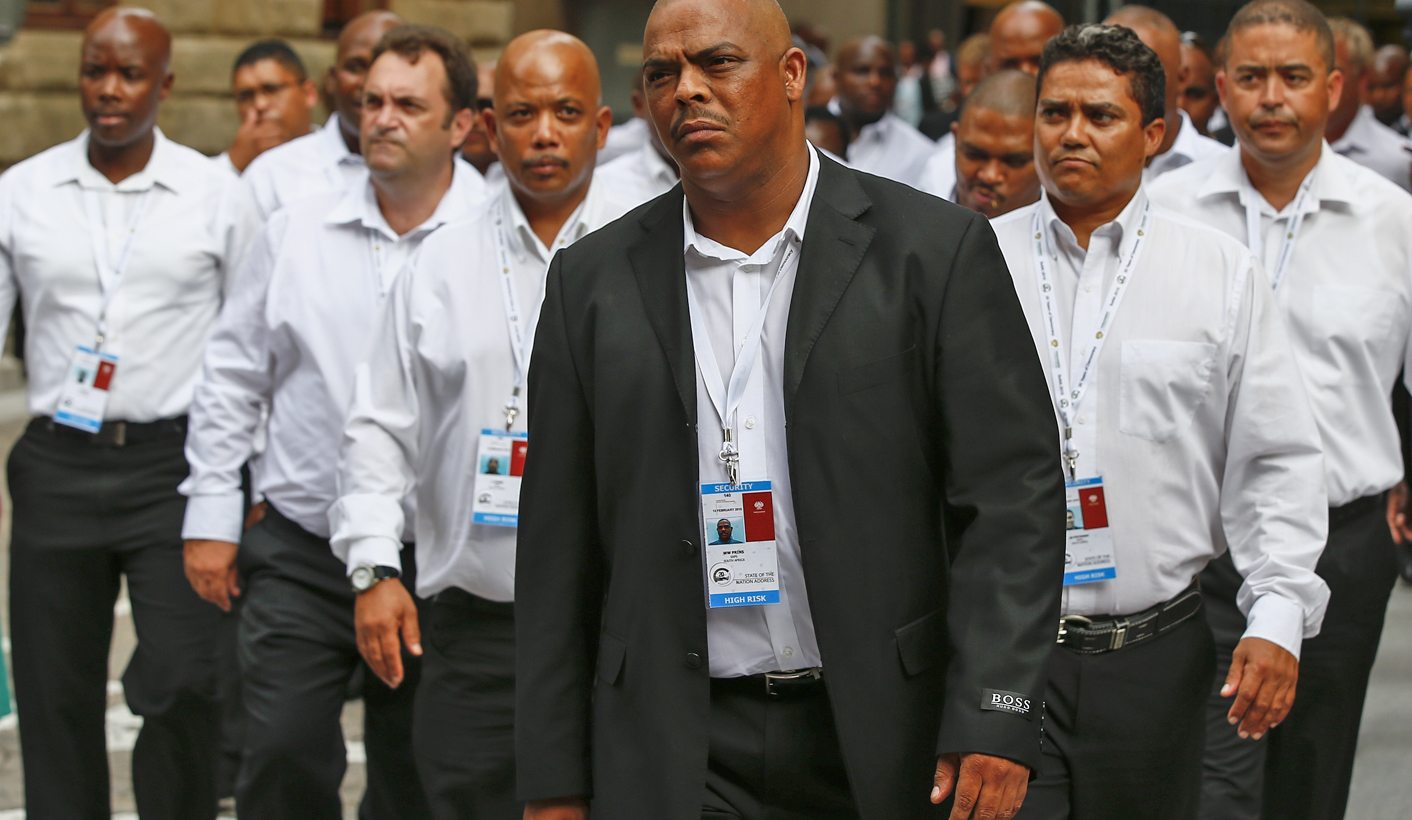 They are dubbed “bouncers”. They spring into action when National Assembly Speaker Baleka Mbete calls in the parliamentary protection services to evict Economic Freedom Fighters (EFF) MPs after a string of loud and rambunctious points of order. On Tuesday, after EFF MPs objected to President Jacob Zuma’s question session, they were shoved, carried and manhandled out of the chamber, but pushed back with water bottles, hard hats and at least one handbag. It was an ugly display of what happens when former riot and other police members are drafted in to enforce, as it’s put in some senior parliamentary circles, law and order. But wait, there's more: there are plans to hire 38 more bouncers. By MARIANNE MERTEN.

Never before in democratic South Africa have police and the parliamentary protection services been used so freely – and often – against MPs, #FeesMustFall student protesters and unionised employees on an unprotected strike over performance bonuses. The sound of stun grenades and the sight of multicoloured smoke grenades were unprecedented in the parliamentary precinct until late last year. The sight of Honourable Members being rammed out of the House was unknown until late 2014.

It has been a slow but steady creep of the securocatisation of Parliament, the legislative sphere of state. And it has been steeped in politicking, which has fundamentally changed the character of the parliamentary protection services to one of being a big stick.

Daily Maverick has seen Parliament’s rejigged organogram and pay scales for the “bouncers”. To date 35 of them have been hired, but there are another 27 vacancies. All report to two so-called “controller: chamber support officers”. Listed separately on the organogram are 54 protection officers (11 posts are vacant), who report to “controller: protection services”. Then there are access control staff reporting to yet another controller.

All of them fall under “manager: access and assets”, currently the most senior security services post, but filled in an acting capacity, as Parliament’s security services boss Zelda Holtzman remains on suspension. Her deputy Motlatsi Mokgatla’s contract expired late last year while on suspension; his post remains vacant. Both were suspended at the end of July 2015, according to City Press, because of their opposition to the recruitment of SAPS members. Parliament in several statements declined to specify the disciplinary charges, saying it was an internal matter.

While it is relatively easy to pinpoint those five days almost 10 months ago as central in the turn to securitisation, as with most matters parliamentary it’s never quite straightforward. Politics, including the governing ANC’s showcasing support for President Jacob Zuma, provide the backdrop against which rules and procedure are deployed.

Increasingly amid the securotalk in Parliament, national key points keep on popping up, most recently at Tuesday’s meeting of the rules committee chaired by Mbete, who is also the ANC national chairwoman. There is a view in the institution’s top echelons that Parliament is a national key point, and thus should have special levels of security. But the government’s official list of national key points shows only “Parliament House”, the presidential Tuynhuys offices and the ministerial office block at 120 Plein Street as properly declared national key points.

Parliament had been in a tizz since the February 2015 State of the Nation Address (SONA) was disrupted by the EFF’s “Pay back the money”, and ugly scenes of MPs being manhandled out of the House by people dressed like waiters, sporting “high risk” name tags. That SONA started off on shaky ground as a signal jammer blocked cellphones. Security was organised by the National Joint Operations and Intelligence Structure (Natjoints), a structure bringing together police, intelligence and defence, which was established, according to two senior SAPS officers, on the basis of a cabinet memo.

In the aftermath of SONA 2015, presiding officers publicly acknowledged they had been briefed on security, but details were not canvassed. Instead, a subcommittee of Parliament’s rules committee was tasked to consider new rules to deal with disruptive MPs. By mid-2015 time was running out; another presidential Q&A was due on 6 August 2015.

At the end of July 2015 Parliament adopted its new Rule 53A to deal with unruly MPs after some controversy in the rules committee chaired by Mbete. Opposition objections prevailed over a half-hearted 11th-hour attempt by the ANC to re-introduce an option to second police. The door to secondment was closed and, according to the new rule, parliamentary protection services means “any employee authorised by Parliament to perform security and protection services”.

On 5 August 2015 Mbete wrote to all political parties leaders, confirming that “personnel has been recruited from the South African Police Service”, adding that all had resigned from the police. (Such speedy recruitment is possible as SAPS members may resign with 24-hour notice under certain conditions.)

By the time Rule 53A was passed, police had long taken over a committee room on the third floor above the National Assembly chamber as an operations centre. By that time almost a year had passed since Natjoints had also become involved. Its instruction 35 of 2014, headed “Procedure for dealing with persons creating disturbances in Parliament and provincial legislatures” and dated 26 August, laid down procedures such as regular risk assessments and the development of “a stringent security plan for safeguarding the national parliament and provincial legislatures”.

This instruction was dated just a few days after the first EFF “Pay back the money” protest scuppered a presidential question session. Then body armour-clad police stopped at the doors of the National Assembly as the ministers of police, state security and others stood on the floor of the House, which EFF MPs refused to vacate.

Any hesitancy disappeared late in the evening of 13 November 2014. During a debate to ratify the Grand Inga hydropower treaty, EFF MP Reneiloe Mashabela called Zuma a “thief” and “criminal”. She refused to withdraw the statement or leave the House. And for the first time in democratic South Africa, several burly riot police dressed in black body armour breached the chamber to remove her.

Since then it has become increasingly easier as shown in the deployment of the high-risk troop of “waiters” at SONA 2015 three months later.

And so too, the riot police were called in against student protesters, who barged into the parliamentary precinct as then finance minister Nhlanhla Nene delivered his medium-term budget policy statement. About two weeks later, riot police were again called into action, this time against striking National Education, Health and Allied Workers’ Union (Nehawu) parliamentary employees.

The 2004 Powers and Privileges and Immunities of Parliament and Provincial Legislatures Act in Section 4 allows security services on the precinct “only with the permission and under the authority of the Speaker or the Chairperson (of the National Council of Provinces)”. Only when there is “imminent danger to the life or safety of any person or damage to property” may security services act without permission, but must inform the presiding officers as soon as possible. Security services are defined in the Constitution as the police, defence force and intelligence services.

In none of the cases of police action at the national legislature has Parliament categorically confirmed its presiding officers issued the necessary legal authority. Parliament seems comfortable playing second fiddle to the Executive, which controls security services.

Since August 2015 the ease by which Mbete calls on the “bouncers” has become more evident. It usually happens without a breath in between naming the MP, ordering him/her out of the House, as the rules require, before calling in the protection services. MPs are expressly prohibited by Rule 53A from intervening when “bouncers” remove others from the House as has happened in November 2014 and again at SONA 2015.

So the “bouncers” are free to do their job. Several MPs have raised deep misgivings about the fact the “bouncers” are not identifiable: on Tuesday they were not in uniform, nor were they earlier this month when the EFF MPs were evicted with less force ahead of the presidency budget vote.

On Wednesday a bunch of “bouncers” dressed in all sorts of outfits were sitting on the benches just outside the National Assembly. They were chatting, checking out each other’s cellphones, and generally looking chilled. They could be. With the EFF MPs suspended until well into next week, it’s unlikely the “bouncers” will be called to action. DM

Photo: Special security police who will be on duty inside the National Assembly arrive for the opening of parliament ceremony and the president’s State Of the Nation Address in Cape Town, South Africa, 12 February 2015. EPA/NIC BOTHMA