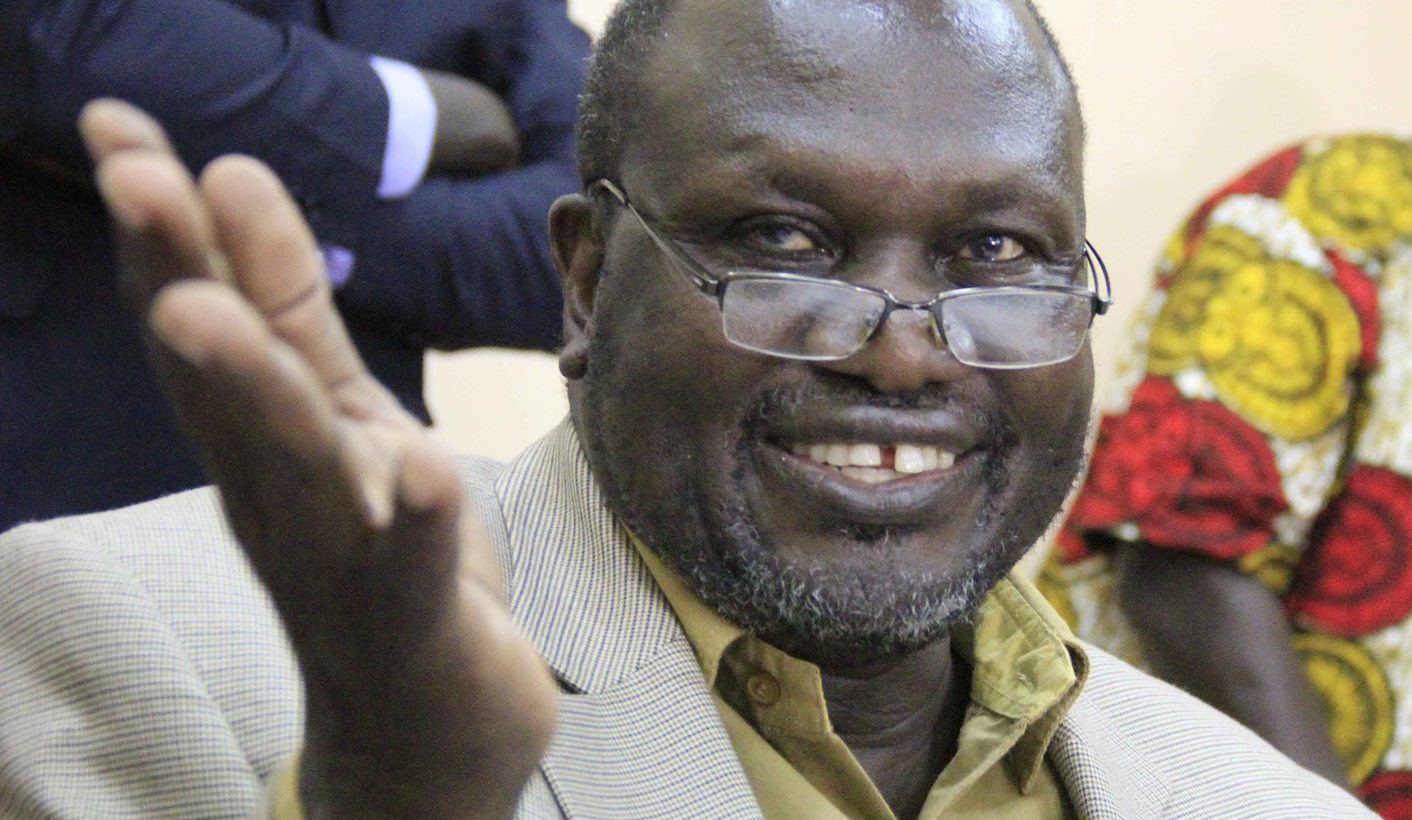 Is he the returning messiah, is he the returning devil, is he returning at all? After South Sudanese rebel leader Riek Machar’s homecoming was delayed yet again – this time indefinitely – LAUREN HUTTON sifts through the wreckage of a shattered nation.

If he ever makes it home, that is. He was scheduled to land in Juba on Monday, but that was cancelled for logistical reasons. On Tuesday, his plane was “delayed indefinitely” amid confusion over whether Machar would now return at all.

It’s been a long and painful war, and on the streets of Juba the hope that the return of Machar, as first vice-president in a new unity government, would usher in a new era is palpable. Everyone wants change. Things have to get better. The economy is floundering on the edge of an inflationary cliff that makes daily survival increasingly precarious. Too much blood has been spilled. The soul of a unified nation, so fragile at independence, has been torn apart. Where shreds of co-operation existed, there are now memories of assault. A visible show of elite reunification is just the start of a long process to put it all back together again.

The problem, of course, is that whatever existed before does not exist any more. There’s not the same amount of money in the national machinery to enable the big tent approach to government that secured President Salva Kiir Mayardit’s administration in the 2006 to 2011 period. There’s not the level of international goodwill and financing that characterised the 2011-2013 period of overly ambitious and almost entirely naïve international state-building. Inter-communal and inter-ethnic co-operation, strained as it was by decades of conflict, are not united under the colours of a newly independent flag but are now filled with animosities over resources, land, and the need for revenge. One wonders if the impacts of the greed, hatred and fear that has been unleashed can ever be contained again.

But the coming of Machar – if he ever does make it back to Juba – is a first step, albeit an imperfect step within an imperfect politics. The international community has crafted and forced a peace deal on South Sudan that is far too similar to the peace process that led to the creation of the independent state. The well-worn liberal peace theory of any peace being better than no peace will fail the people of South Sudan again.

The pitfalls are glaringly obvious, and one need not look far to point out all the ways that the peace agreement will fail – starting, of course, with the fact that the president only signed it with extreme prejudice (handwriting his reservation on the final text). Implementation has, rather unsurprisingly, stalled from the start. The lack of ability to deal with core grievances and the fundamental governance crisis that underpins this conflict means that while the face of elite politics may change, its substance has remained as virulent as ever. Militarisation continues to be chosen over development. Sustaining the kleptocratic and sectarian state, within a smaller resource envelope, has led to the creation of ethnic fiefdoms with survival linked to loyalty. It’s state capitalism on crack – consume, consume, consume.

On an optimistic day, the role of the international community can help bridge some of the gaps created by the interface between a predatory state, militarised ethnicities and a resource-scarce environment. One looks at the more than 200,000 people living in the UN Protection of Civilians sites and knows that these people would not be alive today were it not for the efforts of outsiders.

But the displacement conditions have created another festering wound. How would you feel if you were forced to live like a pauper in a prison camp run by the UN in your own country? And, if you can leave, what do you go back to? You go back to a home that has been burnt to the ground, crops destroyed and livestock looted. You go back to essential relationships of kin that have been dramatically altered by violence, and communities reeling to adapt again to this militarised culture.

The demographic impacts of the violence have yet to be assessed and, more than just the number of people who have been killed, the impact of those lost on people’s ability to recover their livelihoods and coping strategies are likely to keep them destitute for generations to come. Going back to build again what has been destroyed so many times makes even consideration of the effort seem futile. But then again, this is the view of an outsider, an outsider who will never have the same tenacious capacity to survive in these extreme conditions as a South Sudanese.

On a more cynical day, one knows that this is a mess that the international community has helped to create. The current conflict has further reinforced that recognition of legitimacy exists in extraversion and the way to reset power is through guns and expensive externally driven peace processes. The political project that is the South Sudanese state therefore has few incentives to establish bureaucratic or consent-based authority. Competence, inclusion and service delivery – these are the necessary building blocks of governance.

And this is what the international response reinforces: when we see the problems as ignorance, poverty and institutions, then the solutions will be neoliberal capitalism based on foreign direct investment and controlled government spending, capacity building and institutional development through state-building. A banal recipe of vainness that attempts to reset societies on the path to some mythical functional liberal-democratic state.

The lack of competence of the state will be buttressed by loans and support – the IMF is already in town and the neoliberal project will go ahead regardless of suitability or impact. With little political capital to spend on real solutions, international actors will depend on humanitarian aid as the principal means of political crisis management, further exposing humanitarians to the weaknesses inherent in their response and enabling the machinations of local actors who astutely use aid as part of their political economies.

Further driving the neoliberal project will be the presence of China and other “new” international actors such as Turkey and Qatar, and it would be no surprise if the desire to maintain their market share will embolden traditional donors to further abandon the veneer of principles and bend to the whims of the government which will demand payment in dollars in exchange for peace. And make no doubt, this is a peace brokered by the international community, and the international community must pay for it to work.

Part of the problem for international interveners, especially the generically defined Western community of donors, UN agencies and international NGOs, is that this latest conflict is seen as a problem to be addressed. Aid, peace processes, security sector reform, development and the usual package of acronym-ed tools and funds will be the solutions to this problem.

But perhaps one should not think about this latest conflict as an anomaly in a country in which violence is the norm. Perhaps it is more useful to think about the December 2013 crisis as the government of an independent and sovereign state exploring new ways of projecting political power. The war was a political project, a way in which the state reorganised the distribution of power and institutionalised its authority. Our efforts moving ahead will only reinforce what has been created in blood.

If he returns, Riek Machar does not come back to Juba as a victor. This is not South Africa in 1994 when a unity government was more than just a symbol. This is not even Zimbabwe whose unity government was used as a cover to further entrench patrimonial power and cripple the opposition. This is South Sudan, where cattle are banks, family ties are your key to survival and politics is neomedieval. Machar’s return is the start of merging the future again with the past. It is a merger which led to violence once before and will lead to violence once again. It is naïve to think that the government has been weakened by war, that the depth of atrocities weighs on their necks and that there will be some future benevolence from these belligerents.

Tuesday’s expected arrival did not materialise, and internationals and locals alike have gotten bored with the will-he-won’t-he hour-by-hour Twitter watching game. Now debate has turned to what his delay means, and to whether he will come back to Juba at all – as well as if, in the end, it even matters. DM

Lauren Hutton is an independent consultant with more than 10 years’ experience working on peace and security in Africa. She has worked for think tanks such as the Institute for Security Studies and the Netherlands Institute for International Relations (Clingendael), as well as operational agencies such as the Danish Refugee Council and Danish Demining Group.