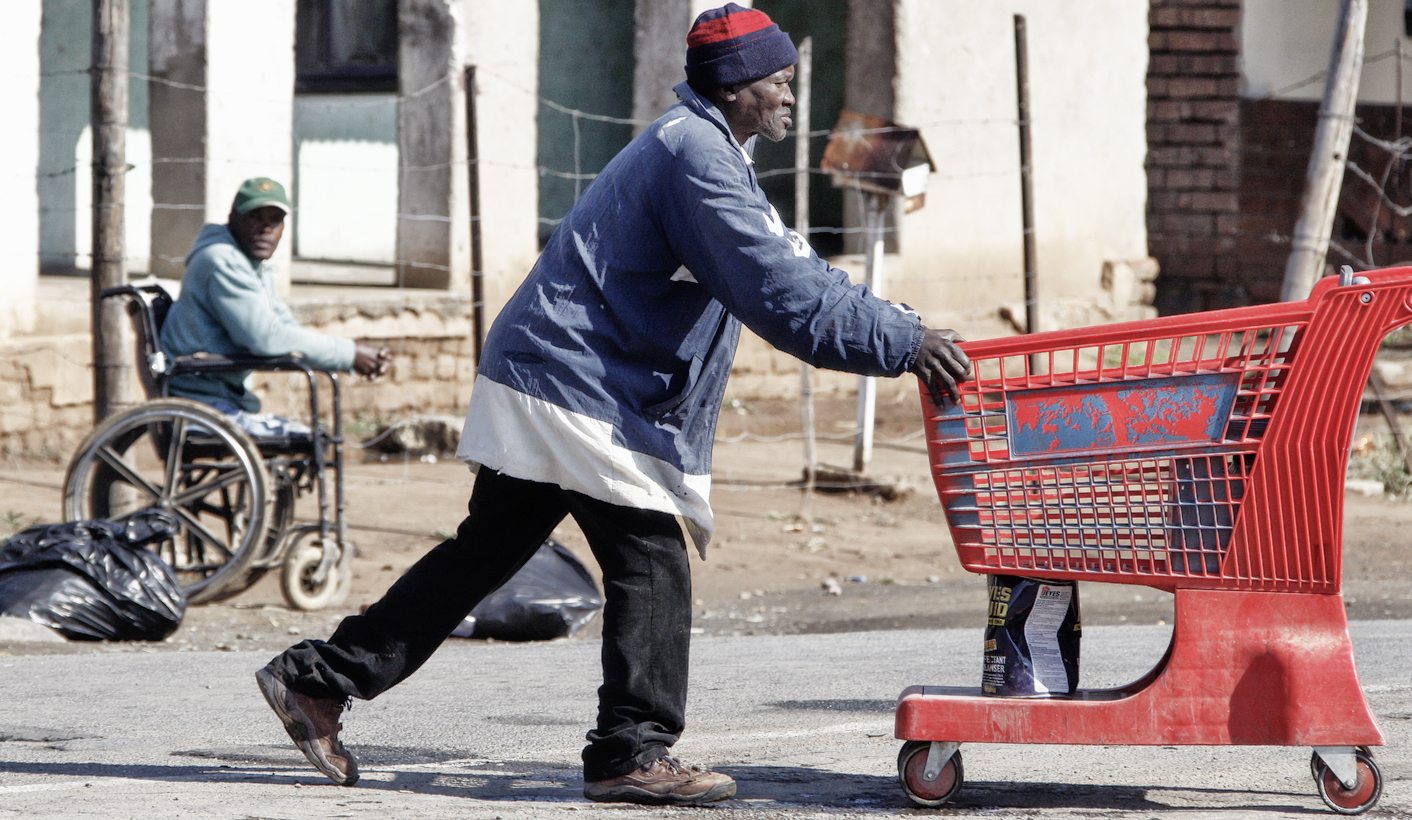 The weekly grocery shopping expedition is a quest to negotiate rising prices, find the specials and decide what will not make it into the trolley. And that’s the experience of middle-class South Africans. For the poor millions, secure access to food is more and more difficult amid rising prices, often blamed on the harshest drought to hit South Africa in decades. Officially, 34-million South Africans are affected by the drought in one way or another. By MARIANNE MERTEN.

The Democratic Alliance (DA) pulled off a publicity stunt in Parliament on Thursday in a media briefing surrounded by groceries needed to meet the minimum monthly dietary needs of a family of five, all to raise concerns about rising food prices.

There were a couple of large bags of mielie meal, cooking oil, several bottles of amazi (sour milk), cans of sardines, cabbages alongside a carton of spinach and tomatoes and another carton of bananas and oranges. From a trolley peeked cartons of 18 eggs. The till slip from a low-end supermarket showed the cost: R3,580.53.

Yet, according to Statistics SA’s 2014 poverty trends report, poor households spent R8,485 a year on food — or R707 a month. For poor households, food costs as a percentage of income at 34 percent are three times as much as their better-off counterparts.

And so the grocery till slips simply don’t add up.

This underscores what academics Saliem Fakir and Nan Tian recently set out: the poor are adversely affected by food price inflation, and due to the lack of market and transport infrastructure residents in rural areas are often hardest hit as they have to rely on hawkers’ higher prices.

Even before the current round of skyrocketing food prices, various research has shown that millions of South Africans go to bed hungry. This includes the 2014 Oxfam International report that 13-million South Africans faced hunger, with more women at risk. The research also identified climate change factors, contributing to food insecurity among communities producing food crops.

The latest Statistics SA consumer price index shows food inflation at 9.4 percent, well above the average 7 percent rate of inflation. Cited as a key contributor is the drought, which has cut South Africa’s crop of mielies, the country’s staple crop, to just over 7.4-million tons from an average annual requirement of 11.25-million tons. That means an estimated 3.8-million tons must be imported to meet food requirements this year at an estimated cost of R14-billion. These imports are paid for by the private sector; mielies arrive in South Africa at import parity prices, making the currently weak rand-dollar exchange rate a crucial factor. Given that the rains, where they have fallen, have come at the wrong time according to agricultural organisations, the mielies situation for 2017 will only emerge around August.

DA MP Annette Steyn on Thursday again called on government to declare the drought a national disaster “to focus attention on the social effects, people not being able to buy food”. Significantly raising social grants, a mainstay of many poor households to stay afloat, was also proposed.

However, the government has dismissed declaring a national disaster, saying that could not be done as not every province was affected, just six. This has been the argument even though Section 23(6) of the 2002 Disaster Management Amendment Act states, “A disaster is a national disaster if it affects (a) more than one province or (b) a single province which is unable to deal with it effectively”. Since the start of the new financial year R6-billion is available for contingency reserves, the monies set aside for unforeseen events such as a drought, which may be accessed once a national disaster is declared.

Instead the agriculture and rural development ministers announced the rolling out of support to particularly small-scale farmers worth just over R1-billion – found by budget reprioritisation of existing unspent monies – while also ensuring water supplies are secured in rural areas and dorps. Specifically on food security, the 2016/17 budget allocates R2.8-billion over the next three years to the Fetsa Tlala food security programme. And while funding is allocated to agriparks, to boost food production, these rural hubs are expected to take some time before coming fully into production.

Special loan facilities of R400-million have been made available through the Land Bank and the Industrial Development Corporation (IDC), while plans to raise a total of R15-billion over the next three years to help drought-affected farmers to recapitalise. But this stands in contrast to the AgriSA-led drought task team call two months ago for R12.5-billion over three years in the form of government guarantees (not loans) and a farmworker monthly subsidy to ensure job security.

Like farmers, poor South Africans face a battle to stretch incomes to put food on the table amid rising prices.

Domestic workers should earn a monthly minimum of R2,230.70 in urban areas and R1,566.35 in rural areas, according to the 2016 labour department’s sectoral minimum income determination.

For farmworkers this year, the determined minimum is R2,778.38 a month, or R128.26 a day. The most experienced security guards in urban areas should earn R4,571 a month, and those in rural areas R3,794, according to the department’s minimum wage sectoral determinations.

Compared to the grocery bill the DA clocked up, the income and food price balance sheet is simply not adding up. DM

Photo: A man pushes a shopping cart across a street in the suburb of Gotso on the outskirts of Bloemfontein, South Africa, 22 June 2009. EPA/OLIVER WEIKEN .