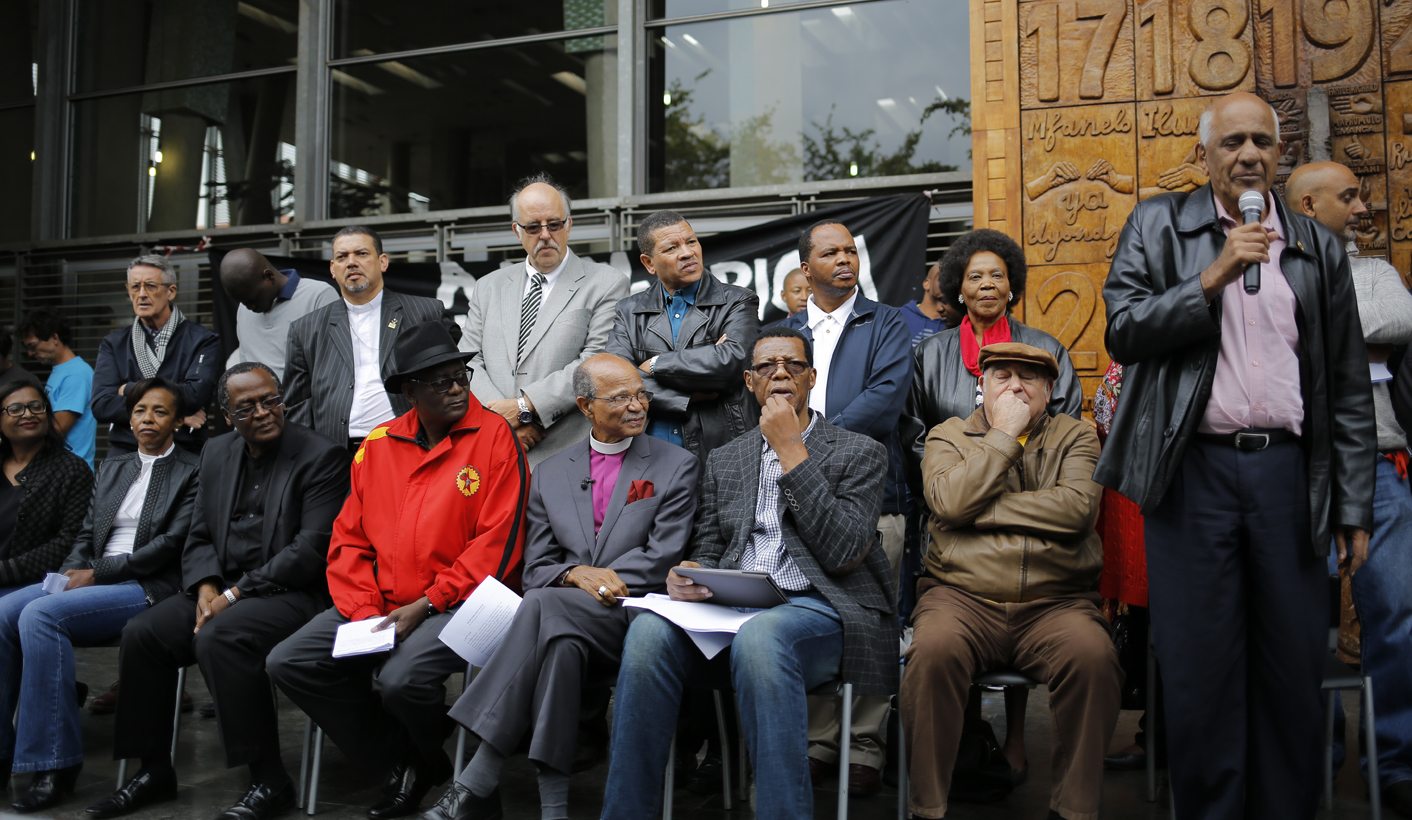 From the folks who brought you the March Against Corruption and, later, #ZumaMustFall – a new group with more brand name stalwarts and the same old idea: throw the bum out. But despite all the intellectual firepower and organisational muscle, do they have a credible plan? RICHARD POPLAK went back to Constitutional Court to find out.

Let it be known that there were drums.

On the steps of the Constitutional Court, where only five days before a huddle of lawyers, politicians and journalists had celebrated a landmark piece of legal wizardry, there were drums. In front of the drums and the colourfully clad men beating them, behind hastily strung construction tape separating the informal stage from the crowd (because, you know, South Africa), sat a group of men and women bundled against the cold. They included ex-Cosatu Secretary-General Zwelinzima Vavi, ex-Minister for Intelligence Services Ronnie Kasrils, former Constitutional Court judge Zak Yacoob, former ANC Deputy Secretary-General Cheryl Carolus, along with academics, artists, unionists, and a smörgåsbord of men in religious attire.

There was no rabbi, imam or Buddhist monk in attendance, a lack of denominational plurality to which I attributed the awful weather. The mood lighting, courtesy of the Great Patriarch in the Sky, was all Welsh clouds and Arctic winds. Despite the divinely ordained inclemency, Reverend Moss Nthla, chairperson of the SA Christian Leadership initiative and of the evangelical alliance, began to read out a statement entitled “Jacob Zuma Must Resign: A Civil Society Call to Action.”

Like me, you’re thinking that you’ve seen this movie before. For those with a political hard drive jacked into their brains, the #ZumaMustFall imbroglio probably languishes somewhere in a backup file. Many of those gathered on the steps of the ConCourt were members of the Unite Against Corruption collective, an ad hoc organisation comprised of a bunch of people who hate corruption. They marched against it last year, and then decided that enough was enough after former finance minister Nhlanhla Nene was relieved of his duties during a ludicrously obvious moment of presidential scam-artistry. Some of their number appropriated the hashtag belonging to the Fallists, organised a small march, laid out picnic blankets in Cape Town (during which memes occurred), and generally displayed what not to do when organising a mass movement. The optics were unfortunate: it seemed like a bunch of activists had taken to the streets because the president had flushed their Investec portfolios down the crapper.

What was so depressing about both the Unite Against Corruption march and the #ZumaMustFall misfire was that a) everyone who cared could see it coming b) by and large the organisers were really nice people who just wanted what was best for the country, and c) the country could use a mass movement. The UAC was simultaneously working with too much urgency and not enough. Corruption is vastly amorphous, and the Nene firing, although it laid bare the piggishness of Zuma and his henchfolk, was the wrong moment around which to organise.

But the recent Constitutional Court ruling, combined with Zuma’s non-apology apology and the ANC’s endorsement thereof, was without question a fire-able offence. More specifically, it was a resign-able offence: if the dude had any class, he’d be drinking mojitos around a fire pool and we’d be in the heat of a snap election campaign. Which is another way of saying that, as activists, it’s pretty tough to screw this one up.

And so, under moody skies, a reverend read a statement entitled “Jacob Zuma Must Resign: A Civil Society Call to Action.”

The speech kicked off with a compilation of Zuma’s greatest hits – Marikana, Nkandla, Waterkloof, Nene, unemployment, inequality, corruption, stupidity. What was the collective going to do about Zuma’s torture-porn CV? “Today we are calling on all South Africans to make their voices heard,” said Reverend Nthla. “Today we announce a rolling plan of mobilisation, conversation and action to put the people back at the centre of our politics and economy.”

Freedom Day, said the reverend, will be upon us on April 27, and it shall be regarded as a “day of action”.

In other words, these luminaries have no idea what to do. Their name? “We are a no-name brand right now,” said Vavi. In a way, that’s just perfect: Vavi in particular has been in an extended dither since he was ushered out of Cosatu, although he assured us that he was about to meet with more than 34 unions “that love this country” in order to “establish an independent trade union movement”.

That said, there was real power in watching these stalwarts denounce their leader and their party, and it was genuinely moving watching the sadness and anger play over their faces.

“I’m a loyal cadre member,” said Cheryl Carolus, “but this is a frog-in-the-pot moment for many of us. I was deeply saddened, because all of this has happened on our watch.” She lamented the gong show in Parliament, a forum that has started to scan like a Trump debate minus the dirty jokes. “I believe that we should be proud of what we’ve achieved by our collective action. But we are in trouble.”

The collective assured us that they didn’t want one thief to be replaced with another thief. They wanted us to know that the Constitutional Court left it to the citizens of South Africa – of whom the president is just one – to assess how best to deal with their judgment. They wanted to emphasise that removing the president would make a statement that impunity in this country was not acceptable, and that accountability ruled.

One after the other, they said: “President, please go!”

It wasn’t, however, until Ronnie Kasrils spoke that he real scale of our collective problem was introduced. Ronnie is my all-time favourite commie revolutionary, but he’s not a hugger. “Coming from the United Front, we fully endorse this declaration,” said he. The old boy was in a sparring mood, and he wanted to speak about women, and in particular one woman.

“In 2006,” said Ronnie, “Zuma was involved in a rape trial. We both knew the girl, Khwezi, when we were in exile in the camps. She was a daughter of a comrade, a five-year-old, and she was our little darling. We fast-forward to 2006, and in that trial he was found not guilty of raping her as an adult. The judge, however, quoted Kipling’s poem If – he said the following words to a grown man. He said, ‘If you want to be a man, my friend, you need to control your passions.’ We knew this problem back when we were in exile. And we did nothing. You can’t sweep anything like this under the carpet.”

It was one of those moments when Jacob Zuma, a man of many masks, came fully into view. Khwezi’s story is, and always has been, the nightmare truth bubbling under the fiction of the Zuma presidency. The pollution of the rape trial – the post-sex-wash-away-the-HIV shower; the cheering Zuma-phile minions; the virulent misogyny – still clings to this whole damn country like nuclear fallout. But leave it to Ronnie Kasrils to remind us of what we’re dealing with: Jacob Zuma is a very, very bad man. In a land poisoned by four centuries of rape and robbery, it should be unsurprising that Zuma, who is no longer human but an expression of our damaged collective id, was destined to become its most powerful citizen.

Zuma will not listen to reason. He cannot be compelled to do the right thing. He is without compassion. He is only appetite.

Which means that niceness isn’t going to get him to go anywhere. Just ask Ronnie Kasrils: when you’re dealing with the devil and war is declared, things need to get nasty, and fast. Rolling plans of “mobilisation, conversation and action” aren’t going to be enough – you cannot jaw Jacob Zuma into an Nkandla stay-cation. You want to take him down? Build a plan. Build consensus. Make sure that for the duration of your campaign, your natural enemies are your friends. Make sure your supporters aren’t chicken-shits. Organise.

And for the love of God, get a bad-ass moniker. “No-name brand” is not going to cut it in the coming war. DM