Trainspotter: Been spendin’ most our lives livin’ in Gupta’ Paradise 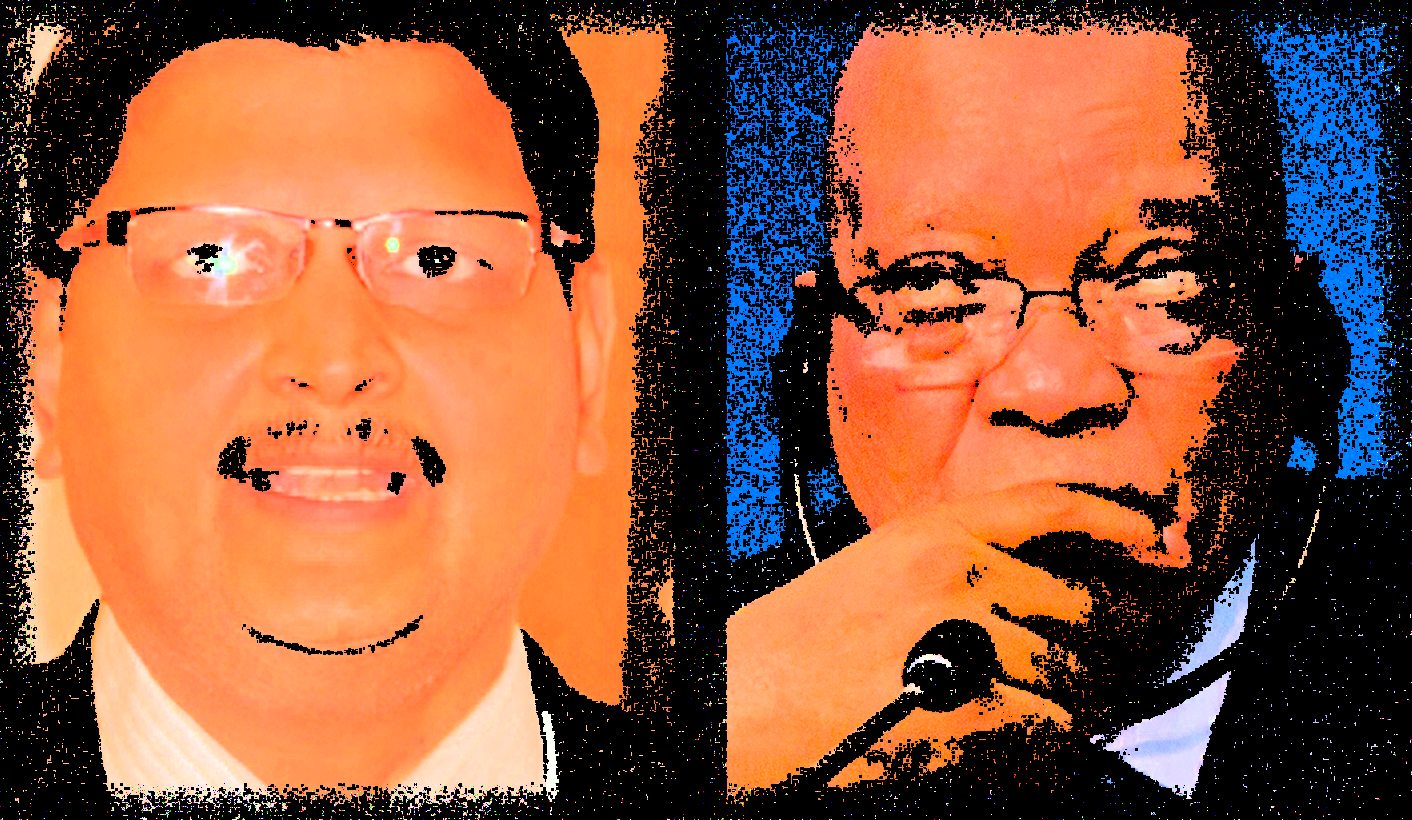 South Africa, it turns out, is 100% gangsta. On Thursday, Deputy Minister of Finance, Mcebisi Jonas confirmed that the Gupta family offered him the keys to the finance ministry before Nhlanha Nene was fired in December last year. We can’t pretend any longer—we’re acting out Godfather IV, we’re in the third act, and we’re about to drown in the carnage. By RICHARD POPLAK

One Friday towards the end of last year, I received a call from a respected economist who works at one of South Africa’s major financial institutions. Normally unshakeable, there was a tinge of hysteria in her voice, a nails-on-chalkboard falsetto that suggested a passenger at the controls of a 747 during an emergency landing. Her intention, she explained, was to glean from political journalists and analysts something that resembled an intelligible motive for South African president Jacob Zuma’s firing of Nhlanhla Nene, who had served as his accidentally competent finance minister for the past 19 months. This kamikaze cabinet reshuffle erased about 15 percent of the Rand’s value in a matter of hours, and replaced accidental competence with guaranteed pliancy in the person of David Douglas Des van Rooyen, a cadre member whose home was once set on fire by the community of Khutsong, where in the mid-zeroes he acted as the apparently unloved executive mayor of Merafong.

The economist was determined to extract from me an account that would satisfy skittish investors, who were now fleeing from the South African currency and bond markets like Western aid workers during an Ebola outbreak. I told her what everyone knew: Nene had come out forcefully against an insane nuclear procurement deal that will likely cost the country R2 trillion sans any of the checks and balances one would expect from so costly an infrastructure project. More damaging still, Nene had displayed the temerity to face off against Dudu Myeni, a key Zuma ally who currently serves as both the chief executive of South African Airways and the head of the Jacob Zuma Foundation. Myeni, a woman possessed of weapons-grade chutzpah (and, according to rumours so pervasive that the presidency was forced to issue a denial, Zuma’s lovechild), was hoping to make a terrible Airbus procurement deal even worse by inserting a politically connected Gupta middleman into the mess. The treasury drafted a memo forbidding this triple dealing, and four days later Nene was out of a portfolio.

Still, asked the economist, why would the president do such a thing? Surely he knew that an already volatile currency would tank even further, and that a nation suffering its worst drought in thirty years would rise up against him in righteous anger? Even the African National Congress (ANC), which had slavishly come out in support of its president’s every buffoonish enterprise, was uncharacteristically terse. Yes, Zuma had the support of the ANC Youth League, whose leader Collen Maine said, “It’s not about Nhlanhla Nene, it’s because of the recession we are in that the economy is not growing. And there are problems with the rand. He might be beautiful to others but he’s not so beautiful that he can make the rand fall.” But, insisted my economist interlocutor, surely the president knew that this was the worst idea in the history of money, ever?

Ah, but as the ensuing months have proved, the president didn’t know. More accurately, the president didn’t care. The economist was paid by a bank to produce careful and algorithmically sound economic models, and it was unpleasant to tell her that these were but sandcastles in a tsunami. What was exceptional about Zuma firing his finance minister was not that it so obviously benefitted the president’s narrow patronage network. Rather, it was how it disrupted one of the unspoken arrangements of the post-apartheid dispensation: the quiet complicity of Big Money and Big Politics in the systematic fleecing of the South African economy.

Zuma had broken a covenant: You shall eat your fill, but the Treasury shall never be fucked with. Pravin Gordhan returned to his old portfolio, the rand stabilised, and everyone went back to sleep.

South Africa, I wanted to tell the economist, is a gangster state.

Like so many of the jerry-rigged countries that emerged directly following the fall of the Berlin wall, the maintenance of the economy was premised on vast and unfettered liberalisation managed by an intersecting mélange of business-folk and politicians, there being no obvious difference between the two. This binge eating, the most extreme version of which was extant in Russia during the Yeltsin years, meant that the flow of old (in South Africa’s case, white) money could not be disrupted, and that the ruling party would be appended to all of the new money that came online after liberation.

Mandela’s economic legacy—maintaining at all costs a stable transition to a globally wired, neoliberal, gingerly regulated free-for-all—has recently come in for severe criticism. His haters have a point. As it happens, the firing of Nene is not the Zuma presidency’s low point: that would be the police massacre of 34 striking Lonmin mine workers in Marikana in August 2012. To an almost stunning degree, Marikana has been treated as little more than an unfortunate workplace accident, the sort of mishap that occurs when dealing with “difficult” working conditions and shifty union reps. After a lengthy commission of enquiry, not a single top politician has been held responsible for any element of the massacre—which is another way of saying that the killings were written in the stars, fated. Lonmin shares spent years in the toilet, but that has everything to do with the plummeting platinum price globally, and zero to do with nearly three-dozen bodybags.

In South Africa, the murder of workers results in no blowback. That corporates don’t care should come as no surprise. That the ANC doesn’t care is unforgiveable. But the ANC isn’t really the ANC—its an ATM. Jacob Zuma is surrounded by a tight cabal of fellow bigwigs, businessmen and family members, all of whom constitute a mafia with pudgy fingers in nearly every facet of the South African economy, licit or otherwise. Their might runs nearly unchecked, but in the last day or so South Africans learned where the real muscle lies.

Jacob Zuma, president of the most powerful country in Africa, is nothing but a bagman. If this was Scarface, he wouldn’t even be Scarface, but some dude with an Uzi standing in the background, waiting to drive the real powerbrokers to a Cuban sandwich food cart. His closest, but by no means his only, masters—the Gupta family—have now been confirmed as the shadowy Rasputins behind the throne. They anoint the princelings. They shuffle the cabinet.

They run your country.

And yet the absolute worst part of the Mcebisi Jonas affair? He said no. Seriously, I mean it. Any time a country is forced to rely on the conscience of a politician, absolute apocalypse is imminent. None of the institutions that were supposed to protect us from this sort of thing are respected by the people we pay to uphold them; the Constitution is used to level banquet tables in a Saxonwold manse.

As I wanted to tell the economist, there can be no models in the gangster state. Only plunder.

Corruption is everywhere. It’s not like the United States isn’t an increasingly fascist oligarchy in the process of being hijacked by a grown-up Richie Rich who marinates in a vat of orange concentrate. But few countries operate with as little class as South Africa. The Guptas, your standard porcine money-grubbing Third World thugs, have captured the state simply because they made some solid early investments in a charismatic ANC politician who loved the finer things in life. They clearly can’t buy everybody, but they did buy Jacob Zuma, a solid investment by anyone’s standards.

It was that easy.

Today was Corruption Day in South Africa. FIFA has confirmed that we bought the World Cup. Mcebisi Jonas has confirmed that we’re governed by gangtas. What happens next? The rand is going to fall so far and so fast that it’ll break Satan’s foot. More importantly, the Guptas are going to have to leave South Africa, and Jacob Zuma is going to have to step down, eventually. This really is the crisis point in a country that is always at crisis point—the moment where we can’t lie to ourselves anymore, and where we must admit that this version of the democratic project has been a failure. Which is not the end of the end—there can be other versions. But they need to kick off now. Our economists need the break.