Op-Ed: When the SARS Wars became an all-out War 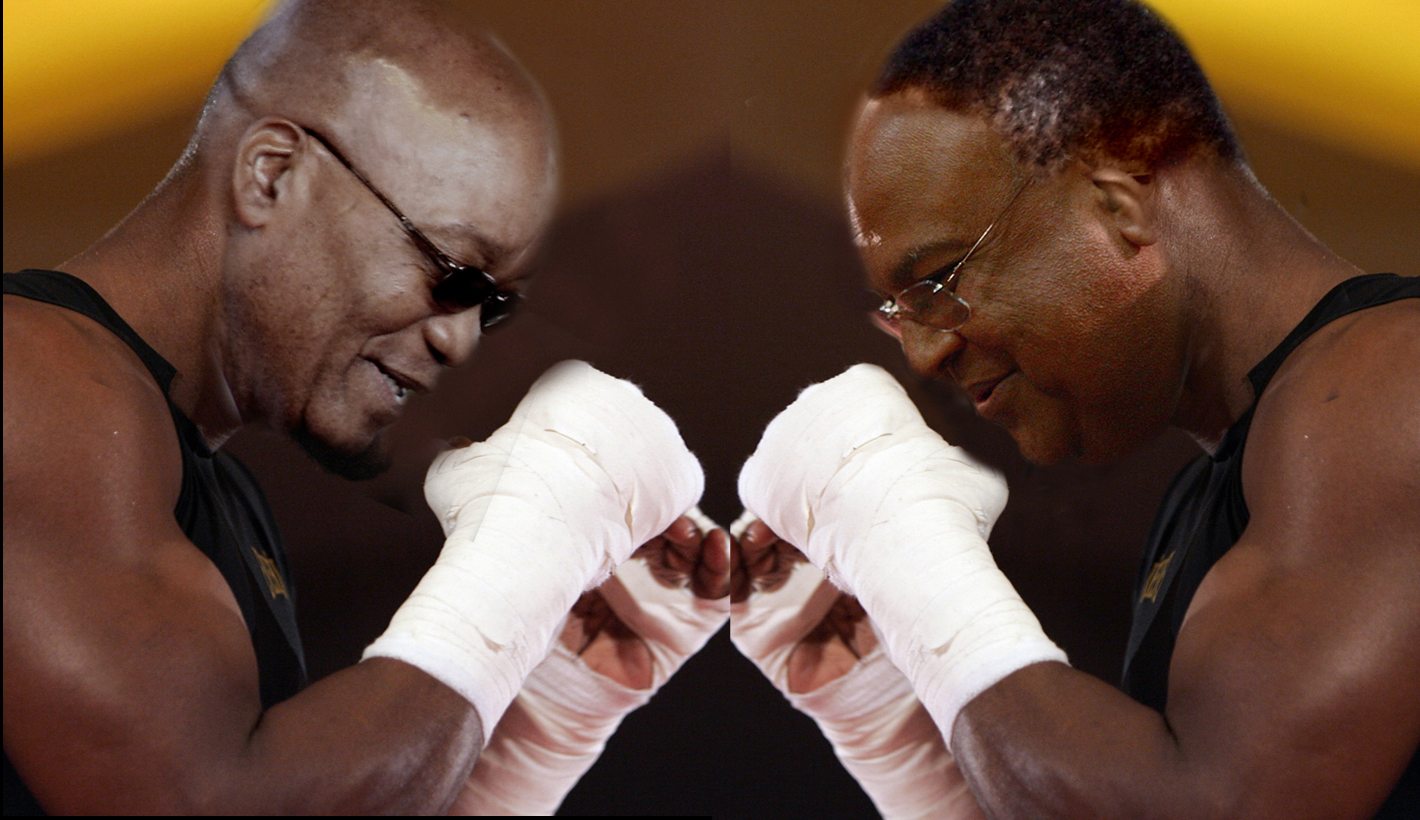 On Sunday the conflict between Pravin Gordhan and the security lock around President Jacob Zuma flared back into the open. After a brief ceasefire, it appears participants have been only cleaning their weapons and assessing their ammunition. It is becoming impossible to believe the Gupta family, despite their denials, are not in the middle of this. And it is more obvious than ever that the Hawks are behaving like a political hit squad; and that Gordhan is going to fight until his last breath. But, more interestingly, it’s looking as though Zuma is less in the position of power to shape events that we thought he was in. By STEPHEN GROOTES.

On Sunday, the Sunday Independent splashed with a story quoting a letter sent by the head of the Hawks, Mthandazo Berning Ntlemeza, to Finance Minister Pravin Gordhan. The paper says Ntlemeza uses this letter to tell Gordhan he has until 4pm on Monday to respond to the 27 questions sent to him last month. It says Ntlemeza explains he cannot wait forever and he does have the legal authority to demand a response from Gordhan.

Then, just before 6pm on Sunday evening, Gordhan responded. In fact, “responded” is an understatement. It was a shot, not just across the bows, but into the rigging of his opponents.

It wasn’t just that he was “surprised” to hear about this “mysterious letter” that he hasn’t yet received. It was that “once again the Hawks, and those who instruct them, have no regard for the economic and social welfare of millions”. In other words, according to Gordhan, by questioning him you are placing that credit rating of ours in jeopardy. Considering how often he was asked about his own position while on his trip last week, it’s hard to argue with him on this.

Gordhan also explains that his lawyers have asked certain questions about why and under what authority Ntlemeza is undertaking this investigation. He says they haven’t received a response to those queries yet. Gordhan doesn’t mention it specifically, but surely one of the most important points here is his original question to Ntlemeza about whether an offence was being investigated, and if so which one. Under our law, you have the right not to incriminate yourself. Thus, Gordhan wants to know first whether he should co-operate, or whether he needs to not co-operate on the grounds that he is the person being investigated.

But Gordhan isn’t finished yet. He uses one of the most powerful weapons in 21st Century South African politics. The reference to apartheid. He asks, “why ‘leak’ a letter that has to be still studied and responded to — to further use harassment and intimidatory tactics like the old Security Police did”. At a stroke he’s comparing Ntlemeza, the Hawks, and “those who instruct them” to the apartheid police.

It’s a powerful claim, and likely to make many people stop and think.

There are those who think that Gordhan should just comply — after all, the questions appear quite innocuous (in fact, some of them are plain silly), Ntlemeza is the legally appointed head of a law enforcement agency, and what could he lose by simply answering questions about the creation of the SARS unit that is at the centre of all of this trouble?

But in reality, it would be foolish to partake in any process in which Ntlemeza has any power at all. Ntlemeza is a liar. That’s not my view, but the view of a judge and Minister Nhleko can dissemble it as much as he wants by drawing a distinction between ‘judgment’ and ‘judges’ opinion’. The fact still remains: of all the capable people in the police and investigative ranks, President Zuma, through Minister Nhleko, appointed the man who was slammed by a judge. And this point simply cannot be made too often— he is thus not fit and proper to lead the Hawks. If someone you know was a liar but was also a police officer, would you allow yourself to be questioned by them under oath, or would you call for your lawyer?

Of course, in the court of public opinion, this gives Gordhan a strong hand: he can simply get his lawyers to write a strongly-worded response indicating that they do not recognise his appointment because he is “not fit and proper” to be a police officer, never mind the head of a priority unit like the Hawks.

Whatever the outcome of that process, he could probably buy at least a year before having to respond in any formal way.

But his other main weapon may well lie in the claim that is growing more present by the day, that the Gupta family did in fact offer the position of Finance Minister to Gordhan’s current deputy Mcebisi Jonas. The claim was first aired in the Financial Times, a publication unlikely to consider airing such an accusation lightly. (Daily Maverick’s source has independently confirmed FT’s allegation. — Ed) On Sunday the Sunday Times claimed that Zuma’s son, Duduzane Zuma, was “present when members of the Gupta family offered” Jonas the job. It quotes “highly placed sources in the Treasury and the ANC Alliance” who it says confirmed that Ajay and Atul Gupta were part of the meeting. It then also suggests ANC deputy general secretary Jessie Duarte phoned Jonas with the same offer.

Both the Gupta family and the ANC then slammed those claims. The Guptas said Atul Gupta was not in the country when that meeting was supposed to have taken place, and say the paper doesn’t have the facts to back up the claim. The ANC released a statement, under the name of its national spokesperson Zizi Kodwa, in which it said the claim was gossip mongering being masqueraded as news”. It said it’s going to the Press Ombudsman and that Duarte is seeking “legal advice” about her options.

What is the most important fact about all of these stories and claims is the silence of Jonas. He is surely the one person, apart from the Guptas and Duduzane Zuma, who can confirm or deny this claim. Considering the Guptas are on the back foot from a public relations viewpoint, his word will be key in this.

Why is he silent? What can that tell us?

It seems almost certain that in this mess, Jonas is very much on the side of Gordhan. At Gordhan’s first press conference after his reappointment in December last year, Jonas looked the most relieved of the lot. Sitting beside Gordhan and SA Reserve Bank head Lesetja Kganyago, he was clearly the person happiest to have Gordhan back. If this is the case, and if it is true that the Guptas did offer him the job, well then, Gordhan finally has his nuclear weapon.

But the problem with an atomic bomb is that it is also a weapon of mass destruction. Imagine this scenario: the pressure builds in Gordhan, either through the Hawks or through some other dynamic, or even if he simply cannot fix SAA (Dudu Myeni is still chair there, even though if Gordhan were really all-powerful she would surely have been the first to be fired). Jonas issues a statement indicating simply that this meeting did happen, he was offered the job, and there were conditions attached.

The pressure that would create for Zuma would be immense. It would surely be the ultimate proof that indeed he has sold out his country to a rich family. It could well be the tipping point for the ANC. There would be a strong move to recall him.

But it wouldn’t stop there. Should there ever be any kind of judicial commission or formal investigation into all of this, Jonas would be asked why he hadn’t reported this to any other structure (it is of course possible that he did, but that it is just being kept under wraps for now). He himself may not escape unscathed. And it would be his word against the word of others, under oath. It could all depend on whichever judge was roped in to sort out the sorry mess.

And what about the timing? What if this bomb were dropped before the local government elections (which are looking as if they could possibly be delayed because of the snafu over the voter registration information issue). It could put the ANC in turmoil when it should be concentrating on elections. No matter how high the stakes, Gordhan wouldn’t want to do that; his blood is too green, yellow and gold for that. Never mind that he could then be blamed for any poor showing that followed in the polls, which could weaken him severely.

Zuma (the President, not the son) of course is key to all of this. Zuma is acting here by not acting; there is a consequence to it, and it is a consequence that Zuma desires. But the pressure on him is growing. The SACP has called for a commission of inquiry into the Guptas. The Guptas can deny all they like, but once you land a planeload of wedding guests at an air force base and suffer no consequence, no one is going to believe that your relationship with the President is just “social” in nature. At some stage Zuma could well find it’s either the Guptas or him.

Adcock Ingram remains under the weather as colds and flu decline