Op-Ed: Ntlemeza’s appointment as head of the Hawks is absurd 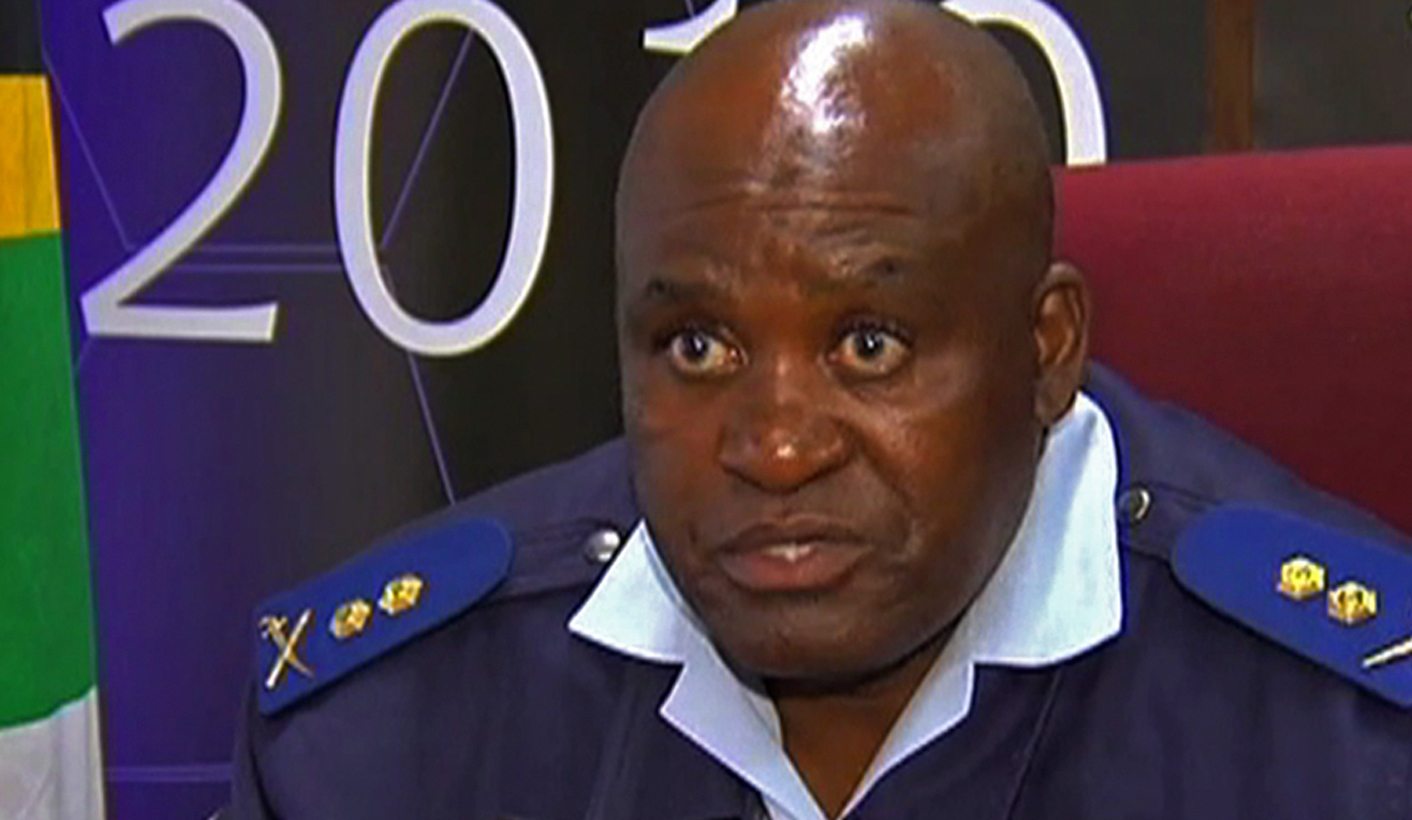 As President Jacob Zuma's second police minister, Nkosinathi Nhleko was always going to find himself under intense pressure. From the sheer difficulty of managing the police in a country with high violent crime rates, through having to manage stone-walling around Nkandla, to appearing to do Zuma's bidding with the Hawks and the Independent Police Investigative Directorate, he was never going to sleep easily. But his latest move, to appoint Major-General Mthandazo Berning Ntlemeza as head of the Hawks may well prove to be a step too far. It could also actually start to be the site of struggle within the African National Congress itself. By STEPHEN GROOTES.

It is common in this publication to point out that we have become so inured to incompetent and poor appointments, that it takes a lot to surprise us. And yet, this appointment is different. This is probably the first time that someone has been appointed to a senior position like that of leading the Hawks after a judge has said that he is “biased and dishonest … lacks integrity and honour, and made false statements under oath”. In other words, this is probably the first time a person has been appointed to a key position like this, after being found by a judge to be a liar.

Of course, there are plenty of people who have been appointed to top jobs after being accused of lying. Jacob Zuma’s presidency started off with his appointment of advocate Menzi Simelane as National Director of Public Prosecutions, despite a finding by the Ginwala commission that he was “prima facie guilty of misleading” the commission. The words “prima facie” there are crucial. In Ntlemeza’s case, there is no “prima facie” about it; it was a finding by Pretoria High Court Judge Elias Matojane.

Ntlemeza, of course, disagrees. The case in which Judge Elias Matojane made this finding was the result of the suspension of Gauteng head of the Hawks Shadrack Sibiya. Certain claims were made about the conduct of the judge by Ntlemeza, and Matojane then made the comments in the course of his final judgment. Interestingly, it was this case that Nhleko was surely referring to when he told the provincial heads of the Hawks that “some elements in the judiciary meet with characters to produce certain judgments”. That comment was surely part of Chief Justice Mogoeng Mogoeng’s motivation for requesting, on behalf of the heads of the country’s courts, for his meeting with Zuma.

When the claim that he was found to be a liar is put to Ntlemeza, he simply tries to bat it away, saying “that was just the judge’s opinion … he never put his mind to what he was saying, he was just saying I am of the view, making his own comment … Ntlemeza’s integrity my friend is number one and Ntlemeza has proved himself to be a focused man … it was just a comment”. The odd digression into the third person aside, Ntlemeza also echoes Nhleko’s suggestion that Matojane did not put Ntlemeza under cross-examination, and thus the finding cannot really be accepted as a finding.

Well. This was a judge speaking in his official capacity, not at a dinner, or in a social setting, or in a pub somewhere. And it wasn’t as if he was putting, as judges sometimes do, a hypothetical example during the course of oral argument with a lawyer. He made the comment during a judgment.

Have we now come to the point where it’s not only the findings of the public protector that are not considered ‘findings’, but the judgments of judges are now not considered judgments? And if that is the case, does that mean we may as well dispense with the whole court system, and just let politics settle everything? And in fact, while we’re about it, why not just throw open the jails and let every murderer out, because obviously the decisions that put them there were not ‘judgments’ but just ‘opinions’.

It’s hard to see where else this can take us. Perhaps even scary.

Then there is another point, it is probably not despite the finding that Ntlemeza is a liar that he was appointed, considering the track record in this cluster, it is possible that he was appointed because of it. In other words, Zuma and Nhleko need someone they know will be useful them, morality not being an issue. It’s hard to see why else he would be appointed. Unless we’ve got to the point where there is no-one in the police service who is senior enough who is not found by a judge to be a liar.

All of that said, it is possible that in fact there going to be serious consequences for this appointment. The finding against Ntlemeza so obviously put him on the wrong side of the “fit and proper” provision in the Police Act that governs the Hawks, that it is surely going to be a very easy appointment to challenge in court. It shouldn’t take 18 months, as it normally does, for a high court to reach a decision. Also, the Supreme Court of Appeal and the Constitutional Court have settled the law on this so comprehensively, that they can probably quite easily refuse to hear any appeals. And considering that the Helen Suzman Foundation and the Democratic Alliance have both made noises about challenging Ntlemeza’s appointment, and that they are very likely to win costs on a case like this, it seems a challenge is very much in the offing. Which means Ntlemeza could be out within six months or so.

However, it’s on the situation within the African National Congress (ANC) that this could have the most serious ramifications. Already, Nhleko’s conduct on Nkandla has been criticised in public, using ANC language. At the Daily Maverick Gathering, Gauteng ANC leader Paul Mashatile said the decision to not ask Zuma to pay back any of the money spent by government on his home was not “the position of the ANC’s NEC (national executive council”. It seemed he was on his own, but then ANC secretary general Gwede Mantashe said that Nhleko’s comment that government would have to spend more money on Nkandla was “reckless”.

In the meantime, the ANC in Parliament is becoming slightly more interesting, in that there have already been two sites of struggle between the party and Zuma, through his proxies. First, the Energy Portfolio Committee seems to be completely at odds with Energy Minister Tina Joemat-Pettersson on the nuclear deal, with its demands for greater transparency. Then the Communications Portfolio Committee tried to stage a revolt against Communications Minister Faith Muthambi over the dismissal of several SABC board members. While that committee’s chairperson, Joyce Moloi-Moropa, eventually appeared to capitulate (she went on sick-leave when the committee actually voted to agree with Muthambi), the Energy Committee chairperson, Fikile Majola, is still fighting.

Meanwhile, the Police Portfolio Committee has recently demanded that provincial police commissioners publicly revoke their public support for National Commissioner General Riah Phiyega. While they were also forced to apologise publicly to Zuma for their statement in support of Phiyega, it could also look as if they were being rebuked for supporting someone Zuma has shown no active inclination to sack, despite the findings of the Farlam commission into the Marikana shootings.

All of this means that this committee could well have a view on the appointment of Ntlemeza, when and if it comes before them.

At the same time, it is interesting that there has been no public message of support from the ANC for Ntlemeza after his appointment. Often, but not always, there is a message of congratulations from the party when someone is deployed to such a position. Not this time, which may suggest that the party knows this is actually an embarrassment for it. Certainly, it would appear that there is some great distance between the view of many in the ANC that there must be an immediate improvement in the calibre of people appointed to crucial positions within the police and justice cluster, and what is actually going on.

There will be those who will claim that Nhleko is just doing his job and has come to all of these decisions himself, that he is not acting at the behest of Number One. But one day, his legacy will be appointing liars to top independent police positions and presiding over the collapse of the police service. Oh, and providing the comedy show known as Nkandla Explanation. DM