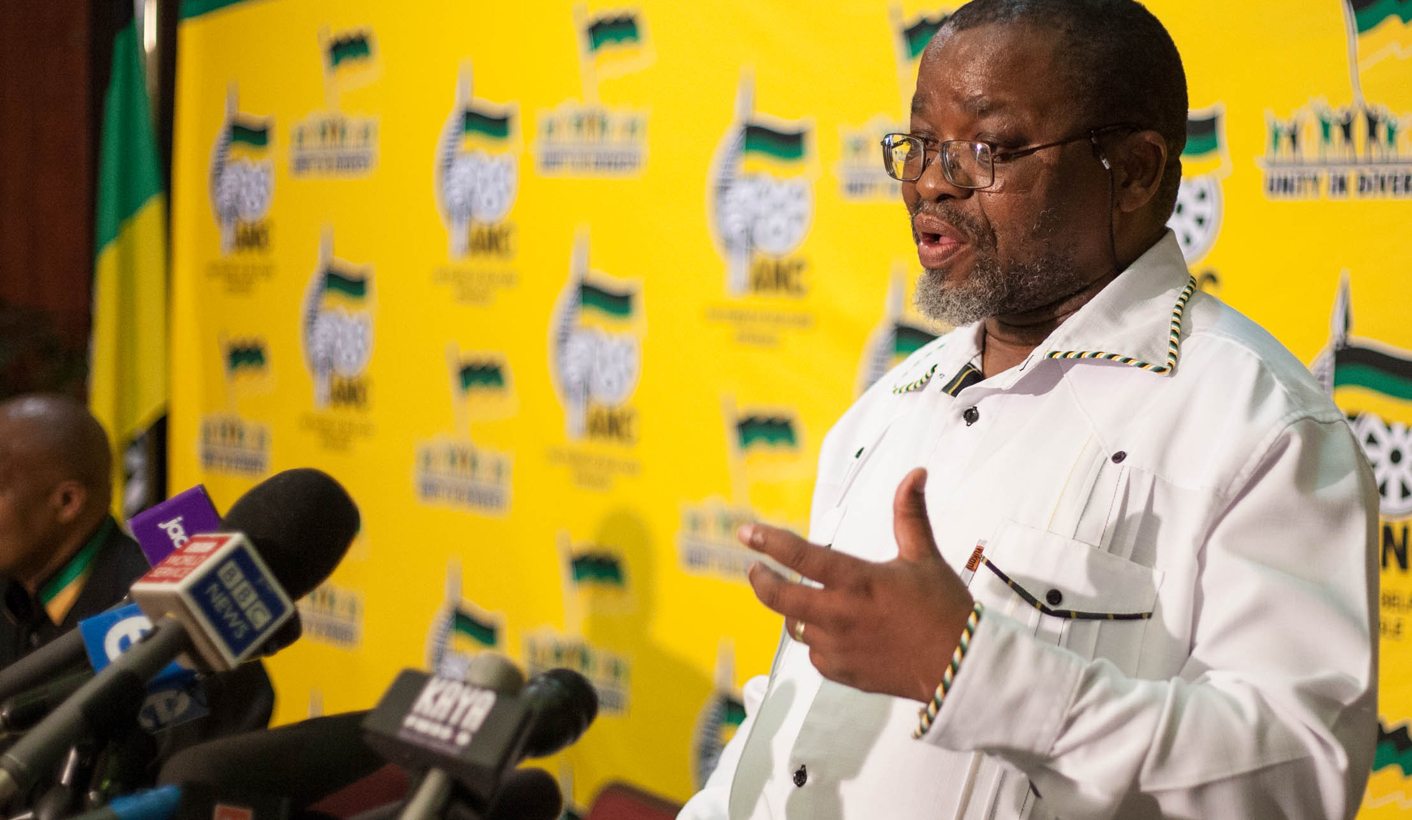 The ANC has always liked to present itself as being secure in power, as if its right to rule was almost ordained by its role in the liberation struggle. But now, for the first time, evidence is growing that it is becoming rattled. With local government elections looming, the party now appears to be suggesting that it is actually worried it could lose power. Gwede Mantashe's claims about the US trying to interfere in our politics are but one piece of evidence. The party's "anti-racism march" is another. What is their own polling telling them? By STEPHEN GROOTES.

On Friday the ANC’s Secretary General claimed in front of tens of thousands of ANC supporters that “We are aware of the meetings that are taking place in the American embassy regularly. Those meetings that are taking place at the American embassy regularly are about nothing else than mobilisation for regime change. We are aware of the programme that takes young people to the United States, keep them there for six weeks, bring them back, and plants them everywhere in the campuses and everywhere. It is our responsibility to mobilise our people to be vigilant.”

Essentially, this is the man who runs the ruling party, claiming outside the offices of government, that the US is planning to remove the ANC from power. It doesn’t appear that Mantashe used the word “coup” in any way. But the meaning is surely the same.

Of course, the claim was immediately rubbished on, where else, Twitter.

The US Ambassador, Patrick Gaspard appeared to be laughing himself:

I’m so disappointed as I always imagined that if I organized a coup it would look like Mardi Gras – food,music,dance https://t.co/KjGkKgMD4T

It’s important here to understand who Ambassador Gaspard is. He is not just some political party hack who was made an ambassador to get him out of the way or as an award for being a top money bundler. He is, in fact, close confidante of Barack Obama, and was his national political director from 2008, before moving to the Democratic Party to basically run his re-election campaign in 2012. He is close to New York’s mayor Bill de Blasio. In other words, this is not a normal ambassador we’re dealing with, but someone whose calls the most powerful person in the world will take. For him to react in this way could be an indication of a very real frustration with our government and the ANC.

The “six-week” programme that Mantashe is referring to is the Mandela Washington Fellowship. And yes, it does take young leaders, from all over Africa, to the US, and then bring them back home. But two of the people who were on last year’s class have said Mantashe’s claims are wrong. Lee du Preez runs a business programme in Pietermaritzburg. He told EWN on Friday afternoon that “Any government who is not fulfilling the needs of their population is going to feel inadequate when another government does something that is for the betterment of their own people”.

Pearl Pillay is another recent alumnus of the programme. She is also, proudly, a member of the ANC, and someone who says she is “part of the movement”. She says that it would be silly to presume that a government taking the citizens of another country on a programme like this would not have any agenda at all. But “to suggest the programme is to sow the seeds of anarchy is, I think, a bit extreme”.

In other words, the people on the programme disagree, strongly with Mantashe.

There are many people who appear to believe that Mantashe is part of a “less-radical” or perhaps “more sensible” ANC. But he does have his own track-record of making, uhm, radical, statements. Shortly after being elected to the post at Polokwane, he accused judges of being “counter-revolutionaries” and of working as a political hit squad against President Jacob Zuma.

Just last week, he has claimed that DA Chief Whip John Steenhuisen’s claim that a ruling by a deputy speaker was “talking rubbish” was racist, because he was “looking down at the presiding officer”. Really? In our politicised environment, we are never going to get any kind of objective finding on this issue. Or any other claim of racism. In these times we really need some kind of objective test.

This shouldn’t be left up to politicians from any party because they have agendas. What is clear though, is that the ANC is going to use every single instance it can to push forward their claim that the DA is racist.

Last week, the ANC said that one of the main aims of its Friday march was to foster unity. But it is hard to square that apparent aim with what was actually said. It appears to have turned into a DA-bashing exercise. Gauteng Premier David Makhura, one of the people with perhaps the most to lose in this year’s elections (and those in 2019), told the crowd that the DA was the party with the “most racist leaders”.

The start of the year was marked, among other things, by the ANC’s decision to “ban” journalist Carien du Plessis (conflict alert: Du Plessis of course, a colleague and friend of the writer) from its January 8th Rally for using the phrase “pantypreneurs” in a tweet, claiming she was “racist”. Despite her long history of reporting on the party with no prior claims of this against her, and the rare accolade of being called a “self-hater” by Helen Zille, during a spat that saw her being defended by the ANC Youth League.

But why is the ANC bringing up all of this before the elections?

It is, of course, inarguable that race is still one of our burning issues. The only factor that could be nearly as important to one’s life chances as whether you are born black or white is whether you are born in a rural or urban area. The anger that many black people feel right now is legitimate. It is right to feel angry at not being properly accepted in a “white corporate environment”. It is also right, as the ANC, to feel frustrated at the slow pace of transformation. Defenders of “white privilege” have succeeded in defeating a large portion of the transformation project.

That said, one of the defining political dynamics of the last five years has been the move from race as the main political issue, towards class. While very few white people have moved towards the ANC, the DA claimed that in 2014 over a million black people voted for it. The black middle class has been growing strongly since roughly 1994 (although the recent economic downturn will have seen many people dropping out of the middle class, or fearing that they are about to). This means that the ANC could struggle to retain some of those votes.

This leads to questions about what it is that the ANC really fears. Why is Mantashe, and others, behaving in this way? Part of the reason behind Mantashe’s reckless statements could be a simple attempt at deflection. He has to get the news agenda away from Nkandla and Zuma. These statements have certainly done that.

But the accusations as wild as these also smack of desperation. They smack of a possible agenda of getting our politics back to race, and away from the quality of governance, corruption, hope, and other politics of class.

At the same time, the last two years or so have seen Zuma, and government, using every single opportunity to talk about the past, about the struggle. At funeral after funeral, memorial ceremony after memorial ceremony, Zuma and ANC leaders have spoken at length, and often movingly, of the contributions made by people involved in the struggle. Of course, that is right and proper. But one consequence of an apparent focus on the past like this is a possible suspicion that the ANC of today is actually more comfortable in the past than it is in the present. It’s easier to all get together and talk about the fight against Apartheid, than it is to agree on how to handle the Public Protector or get the country on the path to economic growth again.

The ANC’s ‘good story to tell’ slogan from just two years ago will just not work in a country where bitterness and anger permeate every layer of the society. The essential positivity of the 2014 message appears to be replaced by the one of fear and loathing.

It is well known that the DA conducts polling before elections. The ANC did so in 1994 and in 1999 and surely does so now. What is it that these polls are telling them? And is the information it is getting from that polling the reason why the party has spent so much of this year focusing on the DA and not the Economic Freedom Fighters?

Considering that one of the major factors in this year’s polls is going to be turn-out, and the ANC’s problem that people who previously turned out to vote for it may now stay at home, we may be getting closer to an explanation for Mantashe’s comments, and the ANC’s recent behaviour. This is all designed to drive up turn-out.

In other words, it’s election time. And the ANC is scared. DM