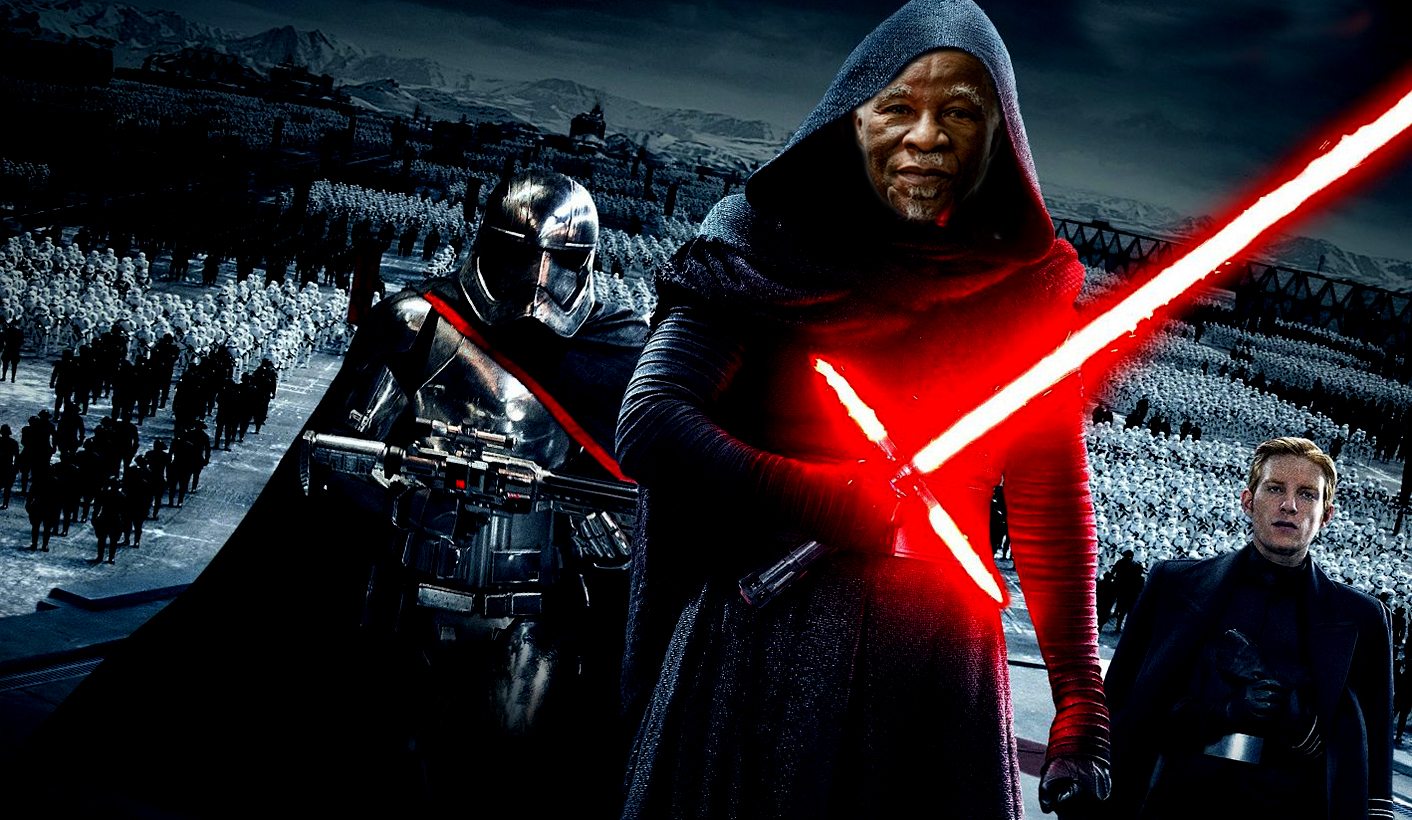 Democratic South Africa’s second great helmsman, Thabo Mbeki, has been filing a series of missives that he hopes will reshape the historical interpretation of his presidency. In this, he shares a vocation with Star Wars: The Force Awakens director J.J. Abrams: they are both rebooters, moulding their product in the image of a suddenly longed-for past. And so, light sabers at the ready: the farce (re)awakens… By RICHARD POPLAK.

Supreme Leader Snoke: There has been an awakening. Have you felt it?

Time shrinks. The lure of the past, a bedazzled fishhook dangled in front of us by the great clock in the sky, is nothing more than a shiny bauble heralding Oblivion. There is, after all, no such thing as human memory, just a bunch fading tattoos randomly imprinted on the cortex. And yet we are all lured, none of us more so than the powerful. For Big Men the past is a big deal: they realise soon enough that history-making means throwing memory (which, as we’ve noted, doesn’t exist) along with facts (which are subject to endless interpretation) into a blender, the resulting concoction depending upon the keenness of the blades. Roman emperors kept their friends close and their historians closer. “History will be kind to me,” Winston Churchill is said to have said, “because I intend to write it.”* All American presidents spin out a memoir, but the disgraced Richard Nixon was impelled to publish ten books in an attempt to drag his legacy out of the past’s pit latrine.

History, however, is not so easily screwed with. The punter tends to know when the story has been stretched too far, when the free association between what actually happened and what is said to have happened too closely resembles a Clint Eastwood biopic.

You’d think Thabo Mbeki would understand this all to well. The man has graced more movie premiers featuring his predecessor than any major politician in Christendom, and yet he’s surely noted how The Nelson Mandela Story has recently faced a series of historical micro-corrections. Nonetheless, although well into his dotage and enjoying a gentle second career as an African elder/statesman, Mbeki has turned a milky eye to his own past. His efforts have so far resulted in three widely discussed articles, entitled “The tragedy of history: When caricature displaces the truth”, “When your position can’t be sustained, create a scarecrow—the menace of post apartheid South Africa” and the most recent, “Yet Another Myth: Mbeki and The Monopolisation of Power.” More are pending—a franchise is in the works.

First, let’s address the already calcified, mainstream historical perspective. Here was a dude who came from Struggle royalty and became an intellectual lodestar in his own right. His patrician bearing and general sophistication were undercut by a seeping paranoia and Shakespearian tendencies (90% Macbeth, 7% Othello, 3% Merchant of Venice). He avoided all exposure to the colour red, embracing neo-liberalism while worshipping at the altar of Thatcher. The result of all this? Don’t rock the boat, baby: Mbeki, with a little help from big business, his pals in Western capitals and the old apartheid oligarchs, swung South Africa wildly to the right. Without consultation—that detail is important—we were plunged into an orgy of openness, the benefits of which, as we’re now learning, poured up rather than trickled down. Much like all political entities, the ANC was a snake pit; Mbeki pumped the reptiles full of ‘roids and transformed the party into a Hieronymus Bosch triptych. Some of his monsters ended up wilier than he: when they came for him, paranoia was useless. Shakespearian tendencies fully realised, he was cast out from the party (and the country) he was responsible for creating.

Who wouldn’t want to rewrite that story?

Which brings us to Mbeki on Mbeki. In “The tragedy of history,” his first attempt at a reboot, the ex-prez disputed his reputation as a paranoid, and offered a pipe-smoke infused reinterpretation of the time late Safety and Security Minister Steve Tshwete publicly named Cyril Ramaphosa, Tokyo Sexwale and Matthews Phosa as subjects of a police investigation. Their alleged crime? They were apparently trying to free up the presidency for someone more, well, un-Mbeki-like. The outing of this “plot” was a lasting blight on his presidency, and his article was meant to complicate the narrative by insisting that Mbeki had in fact reprimanded the conveniently dead Tshwete for his supposed indiscretions. The whole thing was just a bit of a misunderstanding, you see.

It is a strange incident to bring up in these strangest of times, what with South Africa in a permanent state of crisis due in no small part to Mbeki’s succession blunder. We have, as the saying goes, some real problems. Yet even stranger was episode two, in which Mbeki insisted that the ANC national executive committee (NEC) under his presidency was as open and consultative as a kindergarten muffin bake, with everyone able to administer rainbow sprinkles or peanuts according to taste or allergy tolerance.

I mean, really? But nothing prepared Mbeki’s dwindling public for episode three (which I’ve titled A New Hopelessness), dropped on the Thabo Mbeki Foundation’s Facebook page late on Monday, January 25. Once again, Mbeki was addressing his reputation as an absolute monarch with an authoritarian streak. The essay spends its time unpacking all 900 words of a December 2007 Guardian article entitled “Mbeki’s shock as ANC turns on him”, by Chris McGreal. The Mbeki presidency, Mbeki argues, was a halcyon time when every procedure was followed and every NEC member knew his or her place. “Throughout the years I served in the ANC and State Presidencies the ANC was very careful to avoid conflating the ruling Party and the State,” he insists. “Logic and respect for the truth therefore dictate that others will have to provide the details about how, as alleged by McGreal, and in the context of all the foregoing, it was possible that I centralised political power in the Union Buildings and marginalised the ANC in terms of the exercise of its responsibilities as the ruling party democratically mandated by the South African people.”

We’re solidly back in “I’m not paranoid but…” territory: McGreal’s accusations, writes Mbeki, “[were] born and sustained as part of a deliberate and purposeful campaign.” We’re treated to an extended quote from Eight Days in September: The Removal of Thabo Mbeki by Reverend Frank Chikane, which gives us an insight “into how disinformation processes were put in place to discredit the leadership of the ANC, akin to the so-called Stratcom Operation of the apartheid regime.”

Slowly, the penny drops—this is actually an essay about his axing of, or rather his not axing of, Jacob Zuma as deputy presidency of the ANC. Which, Mbeki insists, he did not do, because Zuma had actually decided to stand down because, you know, he had other shit on the go.

The point? Mbeki had followed procedure, everyone else lied—Jacob Zuma had decided to take a busman’s holiday, and no one in the NEC had the courage to say as much.

This, friends, is what power does: it sends the one-time wielder adrift into a contracting chunk of time/space, endlessly reviewing the machinations of his or her diminished heft. Mbeki was an anti-vaccer pseudoscientist long before half of California was, and he coddled Zimbabwe’s leadership when it wasn’t in this country’s best interests—those were catastrophic blunders. More importantly, regardless of HIV status or Zanu-PF fanboy leanings, South Africans inhabit the country that Mbeki helped build. Regardless of race or class, we are locked in a vicious debate about race and class—one that was forestalled at transition, and derailed (almost) entirely by Mbeki’s “don’t rock the boat” faux-stability. The party that he infused with his paranoia and divisiveness is crippled by paranoia and divisiveness.

We live in Mbeki World.

This is the man who gave one of the single greatest speeches of the twentieth century, who once held such vast hopes for the country and the continent. His epistles from the Great Beyond are so massively disappointing because he’s reduced himself to a high-end carnival barker, a historical window-dresser, a makeover specialist. When J.J. Abrams and Disney rebooted the Star Wars franchise, they knew to take the best bits, make them louder, and to turn the whole thing into an industrial scale celebration. Mbeki has chosen to wallow in nostalgie de la boue. The obsession with looking back is “not so much about the past”, wrote the great scholar Svetlana Boym, “as about vanishing the present.” And so his force—and ours—hasn’t reawakened. It’s been diminished further.

What’s next? Well, it’s clear that Mbeki for now isn’t interested in addressing the substantive mistakes—or, for that matter, the triumphs—of his presidency. He’s settling minor historical points in order to influence major historical accounts, but he will not deal with the present, because he’s trying to disappear it. Not only do his letters lack the courage of a true statesman, they are missing the conviction of a patriot. As he fine-tunes his own legacy, we’re out here in the real world sweating out the worst drought in thirty years, to name but one of the nightmares currently facing the country. “”We won’t grovel; we won’t confess; we won’t do a mea culpa act; but we will be one hundred percent accurate,” said Tricky Dick of writing RN: The Memoirs of Richard Nixon. As with Mbeki—as with any leader sporting a compromised record—a mea culpa would have sufficed very nicely, cheers.

And the worst part? It’s all for nothing. History, I’m afraid, is going to go Jacob Zuma on Thabo Mbeki, and in its dealings will prove bloodthirsty, merciless. DM

* Weirdly, Mbeki actually drops this quote in his second letter, and goes on to write, “However it would seem that what Churchill actually said, speaking at the British House of Commons on 23 Jan 1948, was, “For my part, I consider that it will be found much better by all Parties to leave the past to history, especially as I propose to write that history myself.

“Whatever his exact words, Churchill’s comments drew attention to the important point that what humanity comes to know about the past relying on written history will be influenced by the political or ideological orientation of the historian or historians.

“Inevitably a major conflict such as the Second World War (WWII) was bound to produce many written histories. As he had promised, Churchill did write the history of WWII, producing a series of six books, and was indeed criticised by some for distorting some of the history to put himself in better light.”