Analysis: Why is Burkina Faso in Al Qaeda’s crosshairs? 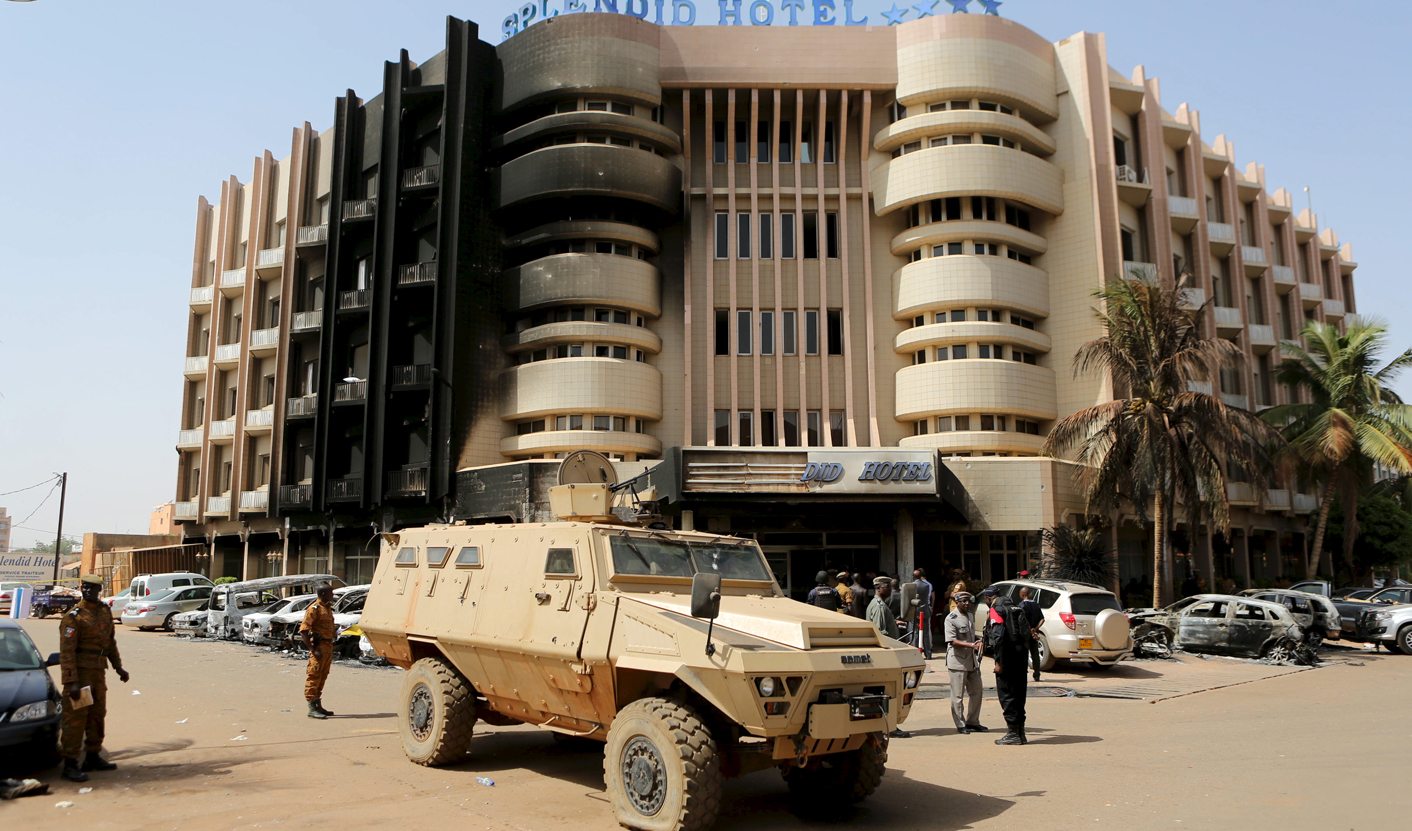 After a tumultuous 15 months, during which they witnessed a revolution, a coup, a counter-coup, and the most open election in the country’s history, the long-suffering citizens of Burkina Faso probably deserve a break. But Al Qaeda in the Islamic Maghreb (AQIM) has other ideas. A coordinated attack in the capital Ouagadougou left 28 people dead, and is likely to have devastating consequences for tourism, development and investment. It’s also a dramatic statement of intent from AQIM... But what message are they trying to send, exactly? By SIMON ALLISON.

Like the Radisson Blu in Bamako, which was targeted by Al Qaeda in the Islamic Maghreb (AQIM) in November, the Splendid Hotel in Ouagadougou is an obvious target for terrorists looking to cause carnage, and make headlines at the same time (as the Daily Maverick has discussed before, carnage does not always lead to headlines).

In a city low on luxury accommodation, the hotel was a natural gathering point for Burkina Faso elites, international businessmen and aid workers. The neighbouring Cappuccino restaurant offers good coffee and decent Italian food, and is usually packed with locals and expats.

On Friday evening, both locations were attacked by gunmen dressed in black from head to toe. By the end of the hours-long siege, 28 people were killed and dozens more were wounded in what is undoubtedly the most serious terrorist incident in Burkina Faso’s history.

The presence of foreigners among the dead was no accident. The victims were from 18 different nationalities, which guaranteed international media interest. It also underscored that this was no isolated incident, but part of the broader clash between violent Islamist groups and secular governments in West Africa.

Sure enough, it wasn’t long before Al Qaeda in the Islamic Maghreb claimed responsibility. In a statement, the group said that the attack was “a new message from the heroic champions of Islam, with their blood and their bodies, to the slaves of the cross, the occupiers of our homes, the looters of our wealth, and who would undermine our security.”

First, a message to rival jihadist groups – in particular the Islamic State – that AQIM is once again a force to be reckoned with. Riven by faction-fighting over the last few years, AQIM has seen its reach and influence diminish as Islamic State has made gains amongst radicals in its traditional strongholds in North and West Africa. Some of these divisions appear to have healed, however. Most importantly, the influential Mokhtar Belmokhtar’s Al Murabitoon unit is now back in the fold, and it was them who conducted both the Ouagadougou and Bamako attacks.

Second, a message to France and its Operation Barkhane – a 3,000 soldier-strong military force spanning six west African countries, designed to combat Islamist militancy in the region – that the intervention is not working. Operation Barkhane has a base in Ouagadougou, and French commandos were involved in the response to the attack on the Splendid Hotel, but by then it was too late. That AQIM continues to expand, and has struck again at the heart of a regional capital, is a strong signal to the international community that French troops alone are an inadequate response to the problem.

Third, a message to Burkina Faso’s government that it is now falls within AQIM’s expanding theatre of operations. “This latest attack in Burkina Faso would seem to be an attempt by AQIM not just to reinforce itself as the main jihadist group in the region, but also to show that it can spread its violent campaign to new frontiers,” said the BBC’s Africa security correspondent Tomi Oladipo. This is bad news for the country’s newly-elected president Roch Marc Christian Kabore, who came into office with more than enough on his plate already.

Finally, for the citizens of Burkina Faso, there is another, more ominous message: that their fight for genuine self-determination is not over yet. It may be the most significant message of all.

The mass uprising in October 2014 that forced President Blaise Compaore from office was notable for its peaceful nature. Even when a key Compaore ally seized power from the interim government in late 2015, the popular response was angry but overwhelmingly peaceful. It was effective, too; the counter-coup failed, the interim government was restored, and orderly elections were held in November. For groups like AQIM, who set themselves up as the only pathway to radical change, the success of Burkina Faso’s people power is an existential threat which must be undermined at all costs.

Hopefully, the Burkinabe, and citizens of the region, won’t take this last message to heart. Peaceful people power brought about more positive change in Burkina Faso in the course of 15 months than AQIM has managed in any country its nine years of existence, and it has done so with a fraction of the blood spilt. Although there will almost certainly be more tribulations to come, Burkina Faso has shown that it is possible for citizens to take charge of their own destiny, and it would compound the tragedy of Friday’s attack if AQIM’s bullets were to reverse these gains in any way. Difficult as it is, this is one message that must be ignored. DM

Photo: Soldiers secure the area in front of Splendid Hotel in Ouagadougou, Burkina Faso, January 17, 2016, a day after security forces retook the hotel from al Qaeda fighters who seized it in an assault that killed two dozen people from at least 18 countries and marked a major escalation of Islamist militancy in West Africa. REUTERS/Joe Penney.