The madness of King Zuma 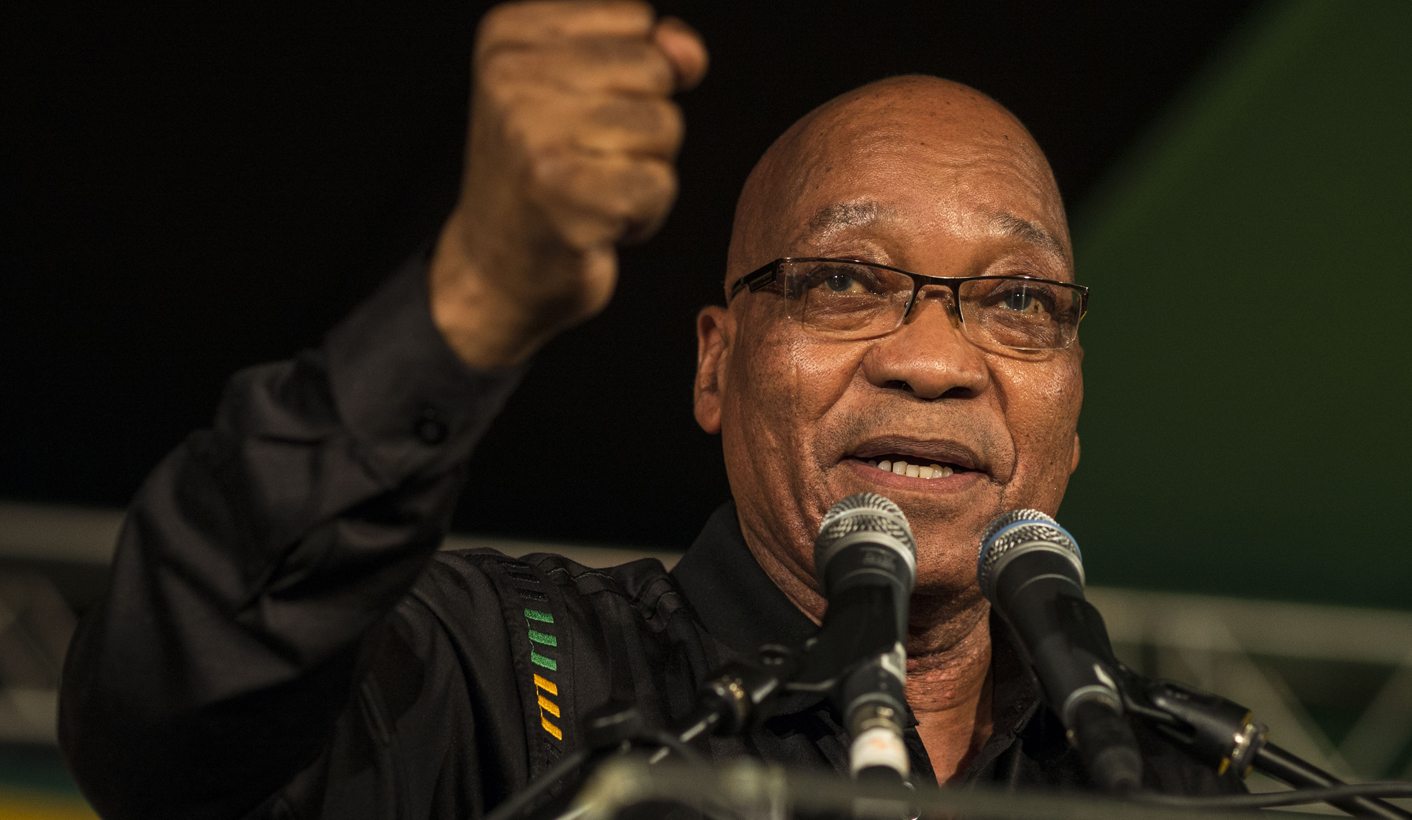 “Those whom the gods wish to destroy they first make mad.” Since the axing of Nhlanhla Nene as Finance Minister Wednesday night, President Jacob Zuma had two public engagements where he could have given his troubled nation the assurance that there was some rationality behind his decision. At both the events he appeared detached from the spiralling crisis he had singlehandedly engineered. It is plain to see that South Africa is not in safe hands. And yet Zuma has more power and security than ever. Perhaps it is us who are mad, as it is us who are being destroyed. By RANJENI MUNUSAMY.

When Judge Chris Nicholson ruled in September 2008 that there was a political conspiracy against Jacob Zuma driven by former president Thabo Mbeki, the ANC national executive committee (NEC) convened a meeting within days to discuss the matter. At that meeting, it was decided that Mbeki should be recalled. The ANC said the following when the meeting ended:

“The judgement has had a profound impact on many aspects of our legal system. It has obviously also had an impact on the affairs of the ANC. We wish to assert to you that our most important task as a revolutionary movement is the stability of our country and the unity and cohesion of the ANC.

“Our movement has been through a trying period and we are determined to heal the rifts that may exist. In the light of this, and after a long and difficult discussion, the ANC has decided to recall the President of the Republic before his term of office expires.”

And yet, when it comes to the “stability of the country”, there is nobody who has done more to undermine South Africa than Zuma. Under his presidency, state agencies and institutions have been compromised and weakened, economic performance has declined, the crime rate has risen, outbreaks of violence have increased, the country faced a damaging electricity crisis, corruption has contaminated the state and taxes have been raised.

South Africa has also been plagued by enormous scandals, from the Nkandla security upgrades to the Gupta plane landing at an air force base to the flouting of an International Criminal Court arrest warrant for Sudanese president Omar al-Bashir. These have damaged public confidence in the state and the country’s international standing.

But nothing has shaken South Africa to the core as much as Zuma’s Yeltsin-esque manoeuvre to fire Finance Minister Nhlanhla Nene and replace him with an unknown ANC backbencher David van Rooyen. The move caused massive instability in the markets and sent the national currency into a tailspin. It further undermined investor confidence, provoked statements of concern from international ratings agency and is likely to have a devastating impact on inflation and the cost of living in South Africa.

Zuma has made no effort to explain his decision and quell fears that he is consciously sabotaging the economy for his personal interests.

On Wednesday night, Zuma addressed a business dinner in Johannesburg, but avoided the subject of the dramatic decision that had been announced a short while before. His speech had no coherence and gave no indication that he was aware of the repercussions of the bombshell he had dropped.

On Thursday afternoon Van Rooyen was sworn in as a minister at a brief ceremony at the Union Buildings. Zuma simply restated his decision to appoint Van Rooyen and gave no explanation as to why he in particular had been chosen for South Africa’s most important Cabinet position. It was perhaps too much to expect that Zuma would explain to the nation why he fired Nene. But seeing that Van Rooyen is a relatively unknown politician who now controls South Africa’s purse strings, it would be reasonable to expect that the president would talk up the new minister so as to boost the nation’s confidence in him.

Zuma could not be bothered to do so. His tone was flat as he announced the appointment and handed over Constitutional Court Judge Sisi Khampepe to administer the oath. When Zuma and Van Rooyen shook hands, there was little rapport between the two. Van Rooyen looked nervous and uncertain, only smiling briefly at Zuma. What is clear is that Van Rooyen has no personal connection to the president; he came on recommendation from those close to Zuma. From an interview North West Premier Supra Mahumapelo did with ANN7 television, it appears Van Rooyen is favoured by the “premier league” lobby in the ANC.

The ANC leadership made no effort to endorse or publicly approve Van Rooyen’s appointment. The party’s initial statement on Wednesday night said it “notes and respects the decision” by Zuma to appoint a new Finance Minister. ANC leaders stuck to the official line that Cabinet appointments are the constitutional prerogative of the president. When ANC secretary general Gwede Mantashe was asked by a journalist for his reaction, he said “talk to the president”. Asked whether the ANC was consulted, Mantashe responded “It is none of your business”.

But indications on Thursday were that many ANC leaders were very rattled by how the surgical strike was carried out. They were not caught off guard completely as rumours of Nene’s axing had been doing the rounds. But there was apparently widespread shock about the execution of the deed and the lack of care about the consequences.

Unlike in September 2008, there are no plans to convene an NEC meeting and it is unlikely that any structure of the ANC would demand an explanation from Zuma in light of the damage to the country. Some ANC members say the only structure that would dare to raise the matter is the ANC in Gauteng as they have a reputation for being forthright and also because the Nene axing is likely to cause further anger and discontent in their support base. But sources in the province said there was no platform or channel to raise the matter, and that they would likely be snubbed if they asked questions on a matter covered by presidential prerogative.

More than the inability to get information and call the president to account, it seems the big worry in the ANC is what further changes the president might make to the Cabinet. Independent Newspapers, which first punted the news that Nene would be fired, reported on Thursday that next in the firing line are Minister in the Presidency Jeff Radebe, Trade and Industry Minister Rob Davies and Higher Education and Training Minister Blade Nzimande. Talk in alliance circles is that Communications Minister Faith Muthambi is preparing to move to the Energy portfolio.

But in the face of so much uncertainty, there is panic in many departments with several ministers feeling insecure. As never before, people fear Zuma and what he might do next.

There was no logic behind the move to axe Nene, and no attempt to dispel speculation that it was motivated by Zuma’s anger over the former minister’s caution on the nuclear build programme and clash with South African Airways (SAA) board chairperson Dudu Myeni. As a result, further changes could be made driven by his whim or pressure from those in his inner circle such the “premier league”.

Deputy President Cyril Ramaphosa, who was assigned the task of overseeing the turnaround at SAA and other state owned companies, did not attend Van Rooyen’s swearing in and has not made any public statement since Nene’s firing. ANC sources say that even he is in the danger zone as Zuma is so unpredictable, he could make a surprise move and remove Ramaphosa as deputy president to stunt his chances of succeeding him.

Zuma is politically untouchable. There is no lobby in the ANC or alliance strong enough to take him on. Mantashe, who used to enjoy significant political power, has been bruised by previous clashes with Zuma and is lying low. The NEC has many junior members with no political standing. Those who do have some pedigree are scared to question the president as they might be shouted down by his minions. Members of Cabinet are beholden to the president for their jobs and through Nene’s firing, have seen the consequences of standing up to Zuma.

Unless Zuma fires himself, he is here to stay and run the country further into the ground till the end of his term in 2019. With so much unfettered power, he could run for a third term as ANC leader and is unlikely to be beaten.

The ANC might suffer major losses in next year’s local government elections as a result of Zuma’s ruinous leadership but even that is unlikely to dislodge him from power.

When the ANC recalled Mbeki, the party said: “To the citizens of South Africa, we make the commitment that we share their desire for stability and for a peaceful and prosperous South Africa. We believe that our decision is in the interests of making that a secure reality.”

There might be people in the ANC who desire a stable, peaceful and prosperous South Africa, but there is nothing they can do now to rescue the country from Zuma’s iron grip. South Africa is now in an economic and political crisis of biblical proportions. Its soul is wide open and defenceless to further abuse and corruption. All because of its leader’s frightening disconnect from reality and rationality. DM

Photo: President Jacob Zuma on the last day of the ANC’s 53rd conference which saw him tighten his hold on the ANC. Mangaung 20 December 2012 Photo Greg Marinovich / NewsFire