Could the ANC force Zuma to choose between his ‘friends’ and South Africa? 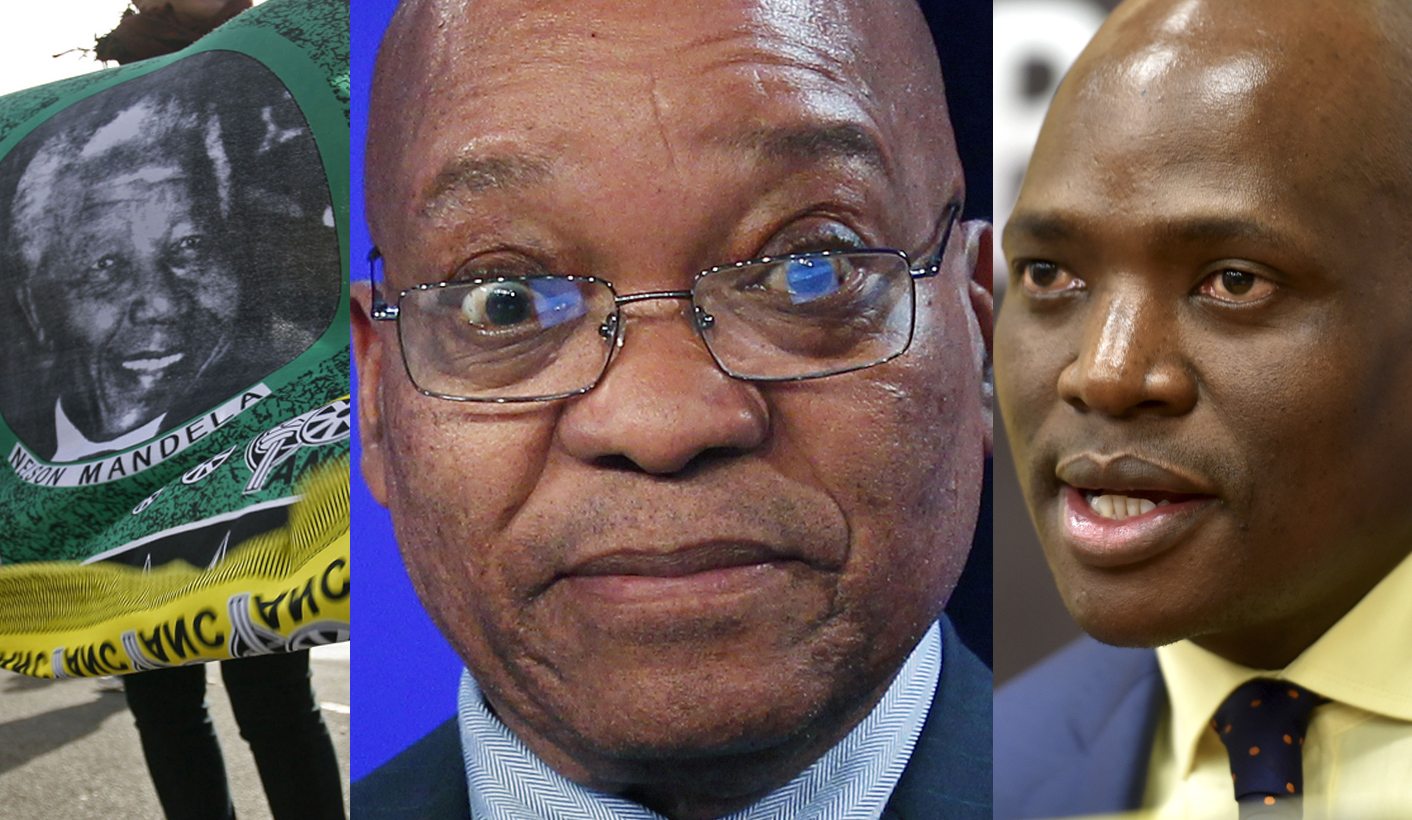 Will Hlaudi fall? That is the big question following the extraordinary ANC statement this week cutting Communications Minister Faith Muthambi to size. The head of the ANC subcommittee on communications, Jackson Mthembu, has now gone further, telling Daily Maverick that the SABC could no longer be led by “nincompoops”. Last weekend’s national general council (NGC) seems to have given more clout to the ANC to deal with weaknesses in the state. But could the ANC force President Jacob Zuma to ditch his controversial friends and vet his appointments? By RANJENI MUNUSAMY.

In an interview with Daily Maverick ahead of the ANC NGC, ANC Gauteng chairperson Paul Mashatile said his province’s delegates intended to be forthright at the meeting about areas of weakness.

“We are not going to evaluate individuals per se but should adopt a posture that is self-critical. We don’t want to go there and say ‘Hey, you guys are not doing enough’… It should be a self-critical approach rather than a blame game,” Mashatile said.

That seemed to be the general tone of the NGC, with delegates being direct in pointing out where policy implementation is being held up and where the state is slipping up. It would appear that this was certainly the case in the commission on communications and media, with candid admissions about how government and state entities were messing up. The commission report adopted by the NGC stated for example that while the Information and Communication Technology (ICT) sector could facilitate economic growth and social development, transformation “remains very slow and there are still barriers to entry for small players”.

With regard to broadcasting, the report noted that the SABC is still faced “serious corporate governance challenges” that “the ANC and its government must unlock”. It said there was a need to “stabilise” the public broadcaster. The NGC also criticised the failure to meet the June 2015 deadline for the switchover from analogue to digital television, and said digital terrestrial TV (DTT) should be implemented without delay to create a new broadcasting landscape.

At a NGC media briefing on communications, chairperson of the subcommittee Jackson Mthembu went further to say the ANC had not been consulted and could not remain aloof on the matter.

Then this week, Communications Minister Faith Muthambi’s office said the ANC NGC never discussed a possible reversal of the Broadcasting Digital Migration Policy and Mthembu’s comments about the party not being consulted were “patently untrue”. The ANC came back fighting, insisting that “issues of digital migration and SABC were discussed extensively” and said it was unfortunate Muthambi had opted to speak on ANC decisions “unmandated”.

This may come across as a storm in a teacup but it is not. It is a major development in the long-running saga of SABC chief operating officer (COO) Hlaudi Motsoeneng’s reign of invincibility and the inexplicable influence he holds over President Jacob Zuma. Motsoeneng is reportedly extremely close to the president, which is apparently why he remains untouchable at the SABC despite rulings against him by the Public Protector and the courts.

Motsoeneng is believed to have recommended Muthambi for the job as Communications Minister, the reason for her unwavering loyalty to him and stubborn resolve to keep him at the SABC. Throughout numerous controversies involving Motsoeneng, the ANC has kept mum and it was clear that he was under special political protection that Luthuli House could not interfere with.

Speaking to Daily Maverick on Thursday, Mthembu said the ANC had to find out what was the source of instability at the SABC. “We need to get that from the shareholder (government). Who are the people who are there? We also need to ask ourselves who the hell did we put in there?”

“We can’t have people who are nincompoops,” Mthembu said.

“To be able to succeed, the SABC needs necessary competence particularly at senior management level… How do we appoint and reject a board member? We need a chief financial officer who knows what they are doing. The SABC needs a chief executive officer who is qualified to lead such an organisation. We need a competent COO with vast technical experience – not just any mafikizolo who doesn’t know if they are coming or going.”

And in case you still have any doubt who these statements are aimed at, Mthembu said: “There are people with wonderful talent and technical skills at the SABC. But they can’t make the SABC what it could be because you have people who are so self important, they even put themselves on the news.”

Mthembu made the comments as news emerged that Motsoeneng wanted his SABC disciplinary hearing broadcast on live television to give millions of South Africans the opportunity to watch. The SABC has finally instituted a disciplinary procedure against Motsoeneng but has failed to comply with court orders to suspend him.

It is clear that Mthembu was emboldened by the NGC to speak up as the ANC is fed up with Motsoeneng. But Motsoeneng will survive for as long as he has protection from the highest office. The question is whether the frank talk at the NGC will impact on decision-making and deployment in government.

During a NGC media briefing on the balance of forces, national executive committee member Joel Netshitenzhe said looked at the root causes of weakness in the state. He said some problems arose because of the kind of people deployed in government, state owned enterprises and finance institutions.

The ANC is now trying to vest more power in its rather dysfunctional deployment committee and also wants people properly vetted, including their qualifications, before being deployed into strategic positions in the state.

But will Zuma take recommendations from the deployment committee or continue making appointments on his own that often backfire and end in disaster? Zuma’s recent appointment of a new Mineral Resources Minister, Mosebenzi Zwane, who has close ties to his friends the Gupta family, raised eyebrows even in the ANC. But since Cabinet appointments are the prerogative of the president, he could not be questioned on it.

The message from the NGC however is that bad appointments are weakening the state, damaging the image of the party and impeding policy implementation. In order for there to be a turnaround, which everybody in the ANC seems to want, the decision-makers in the state would have to pay attention.

Mthembu said the NGC decisions would be processed through the various subcommittees, which would then communicate with the relevant people in government.

“We can’t implement policy and decisions sitting at Luthuli House. The implementation tool is government. The NGC said the ANC cannot be sitting on sidelines hoping deployees are doing what supposed to do. There needs to be political oversight,” Mthembu said.

A big test of this will be whether Muthambi and Motsoeneng continue their wrecking ball double-act or whether the ANC officials will back Mthembu in drawing the line. How this matter plays out will influence whether others stick their neck out the way Mthembu has done or despair as the state continues to rotate on its own axis.

The NGC accepted a proposal that a new monitoring and evaluation division be set up in the ANC secretary general’s office to check how policies and decisions are implemented. But will this division be able to call out the president when the state, and particularly his office, fails to follow the decisions of the NGC? And how will Zuma respond to being evaluated by a group of people who report to Gwede Mantashe, considering the strain in their relationship?

Zuma will ultimately have to show whether his loyalty lies with his controversial friends, including the Guptas, Motsoeneng and the leaders of the much-denied “premier league”, or the general will of the ANC. He always claimed to be the consummate party man, doing whatever the organisation wants. Now is the time to prove whether he in fact is. DM