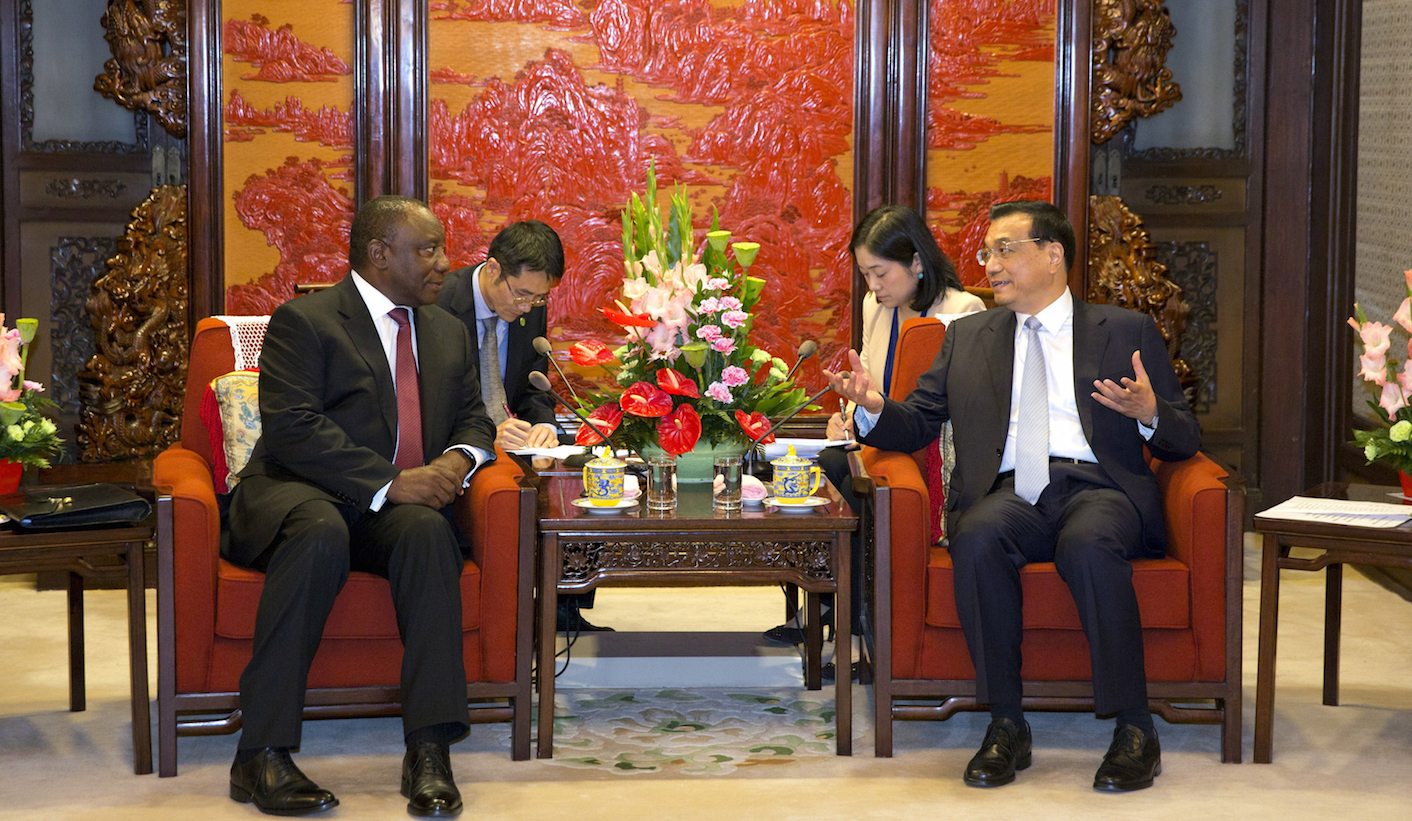 Last week, The Economist published a bruising editorial denouncing South Africa’s foreign policy as “clueless and immoral”. It clearly hasn’t gone unnoticed by the powers that be in the ruling party, as a large portion of Deputy President Cyril Ramaphosa’s answers in the National Assembly on Wednesday were devoted to defending the country’s international relations. By REBECCA DAVIS.

“To understand how far South Africa has strayed from Nelson Mandela’s legacy, one need only peruse the latest foreign-policy paper drafted by grandees of the ruling African National Congress (ANC).”

So begins The Economist’s latest editorial on South Africa’s foreign policy: a piece headlined ‘Clueless and immoral’. South Africa, the publication declaims, “risks becoming a laughing-stock, not least in Africa itself”.

It contrasts the government’s refusal to grant a visa to the Dalai Lama with the “whisk(ing) away” of Sudanese President Omar al-Bashir. It accuses the ANC of unwarranted hostility to the West in order to boost relations with China, when Europe remains South Africa’s biggest trading partner. It also cites the aid given to Africa by the West to fund HIV/Aids efforts, and the military assistance offered to tackle “jihadist militias” in Mali and Nigeria.

Taking questions in the National Assembly on Wednesday, Deputy President Cyril Ramaphosa made no direct reference to The Economist’s views – though the opposition Democratic Alliance (DA) did so obliquely when an MP described the country’s foreign policy as “clueless and immoral”.

But a question from an ANC backbencher inviting Ramaphosa to “share with the House the rationale that underpins (the government’s) international relations strategy” gave the deputy president the opportunity to mount a defence.

“Our decisions,” said Ramaphosa, “are informed by our desire for a just and humane world order”. He stressed the fact that South Africa’s is an Africa-first foreign policy driven by the need to contribute actively to the social and economic development of the continent. Ramaphosa listed African countries in which South Africa has involved itself in peace-keeping initiatives: the Democratic Republic of Congo, Burundi, Sudan and South Sudan. He also gave a shout-out to his possible presidential rival Nkosazana Dlamini-Zuma and the work she has done in energising the African Union.

Ramaphosa said the government was convinced that the approach it has taken to foreign policy “remains valid, relevant and progressive”.

The DA pointed to the fact that a number of African leaders have pushed through amendments to their respective national constitutions in order to seek extensions to their term limits. Ramaphosa was asked what South Africa is doing to stop this.

In response, the deputy president stressed that South Africa’s policy is one of “respect for sovereignty and self-determination” of other countries, which amounts to a stance of non-interference in their internal affairs. Where democratic principles appear to be undermined, Ramaphosa said the government employs its “powers of persuasion”, which he described as the “best diplomatic tool we can use”.

“When you say we are ‘clueless’, I don’t know what you mean by that,” Ramaphosa said. “Our foreign policy is very progressive. It cannot be faulted.” He added that the ANC was implementing “the best foreign policy this country has ever had”. As the Daily Maverick’s Ranjeni Munusamy speculated on Twitter, does this amount to a suggestion that the current administration’s foreign policy is superior to that under former presidents Thabo Mbeki or Nelson Mandela?

In Parliamentary discussions of South Africa’s foreign policy these days, the issue of Bashir and the International Criminal Court (ICC) never takes long to be raised. On this occasion, it was the Inkatha Freedom Party’s Albert Mncwango who did the honours, asking if the government’s flouting of the ICC’s arrest warrant had negatively affected its international standing.

Interestingly, Ramaphosa seemed to interpret the question as asking whether President Jacob Zuma’s standing had been tarnished, rather than the government’s as a whole. He said Zuma would soon travel to the United Nations’ general meeting, where the president would be certain to be “fêted”.

Ramaphosa said that whenever he was deputised to travel abroad on state business in Zuma’s stead, international leaders always took him aside and asked: “Where is my brother Jacob Zuma? Pass my greetings on to him!”

The DA’s Geordin Hill-Lewis demanded to know on what basis the government was cancelling some bilateral trade agreements but establishing new ones with other countries. Ramaphosa replied that the government sought to enter into trade agreements with as many countries as possible, but some past agreements might need to be “streamlined, or amended, or improved”. He paid specific tribute, based on his recent trip to Japan, to the Japanese desire for further investment in South Africa.

China was also on Ramaphosa’s mind. When the Economic Freedom Fighters’ Floyd Shivambu asked him why South Africa would not pursue a more non-capitalist economic policy, given the low levels of economic growth, Ramaphosa admiringly cited 1970s Chinese leader Deng Xiaoping. Deng had correctly realised that China needed to harness the power of the private sector, Ramaphosa said. “The magic is how you harness the strength of both sectors.”

Objecting to Ramaphosa’s failure to respond directly to a DA question, DA chief whip John Steenhuisen angrily commented: “This man wants to be the president, and he can’t even answer a question!”

Shortly afterwards, Shivambu suggested mischievously that Ramaphosa would never be president because “the ‘Premier League’ says it’s not going to happen” – a reference to the influential group of provincial premiers who allegedly succeeded in getting Collen Maine elected as the new leader of the ANC Youth League.

Shivambu was alluding to the rumour that the ‘premier league’ is backing Dlamini-Zuma for the top spot rather than Ramaphosa. The deputy president did not take the bait.

No doubt Ramaphosa found the second half of his Wednesday afternoon more relaxing than the first. After his National Assembly appearance, he retired to attend a function held by the Parliamentary rugby team, during which he was to be given a blazer and honorary membership. In case you’re wondering who the captain of Parliament’s rugby team is, it’s Congress of the People MP Nick Koornhof. No word on whether the team’s transformation profile is more acceptable than that of the Springboks. DM