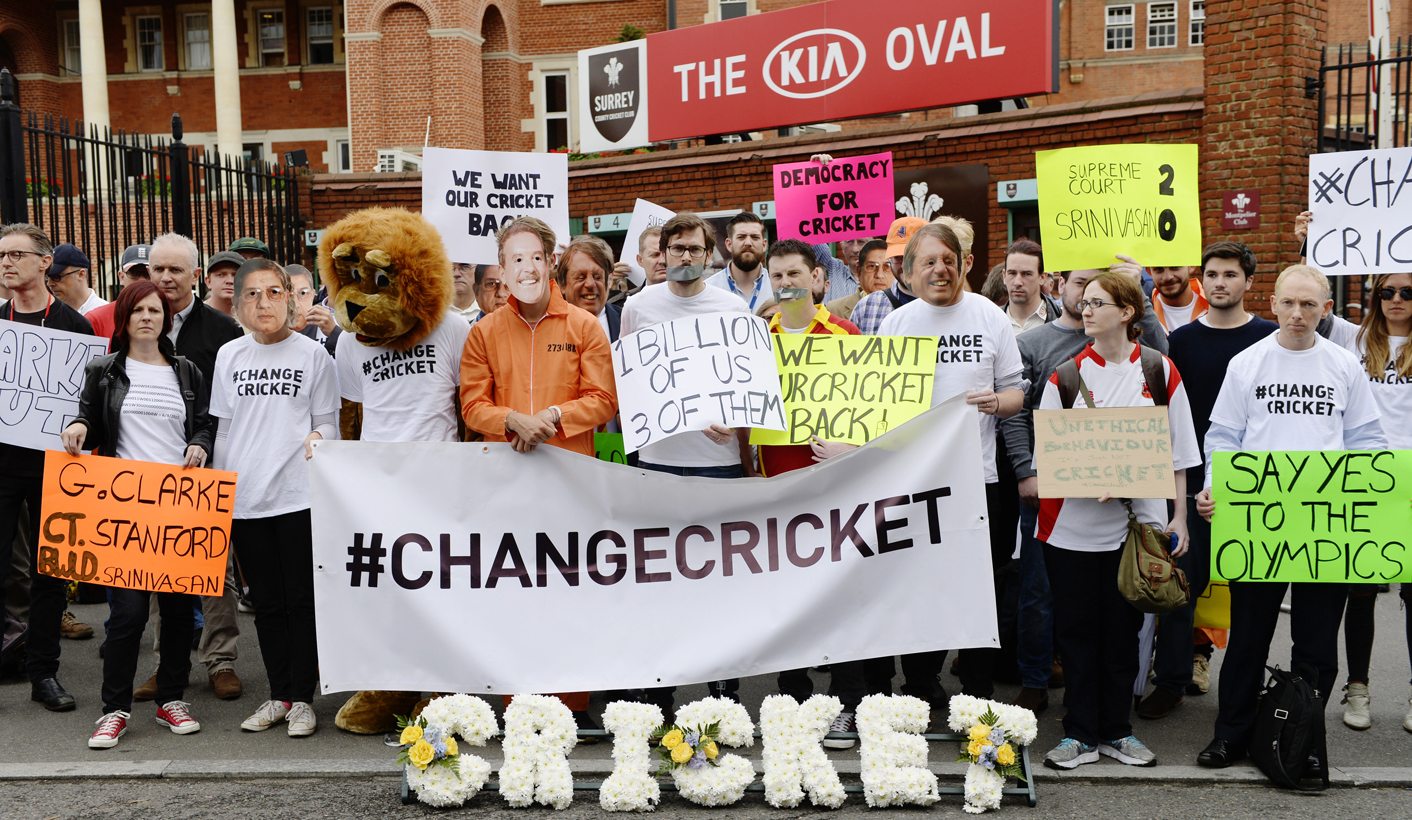 Cricket fans are becoming more and more aware of how unequal the playing field is for those teams outside the ‘Big Three’. A silent protest outside The Oval during the Ashes one again highlighted that fans of the sport are increasingly demanding accountability from those who govern it. By ANTOINETTE MULLER.

The pair are the brains behind the documentary Death of a Gentleman, which claims that dubious governance has endangered the future of cricket. It also heavily criticises the decision to truncate the World Cup to 10 teams as well as the International Cricket Council’s (ICC’s) decision to throw the 2012 Woolf Report out of the window.

The protest was made up of three minutes’ silence, one for each one of the ‘Big Three’ (Australia, England and India) who recently took the game hostage. It was attended by more than 100 people, Damian Collins, MP for Folkestone and Hythe, has called for Clarke to appear before the Culture Media and Sport Select Committee to answer for the sins of the England and Wales Cricket Board, but the protest goes much further than that.

It forms part of a greater #ChangeCricket movement in which fans of the sport are calling for administrators to be held accountable for their decisions and their greed. The movement calls for fans to sign a petition at www.changecricket.com.

While it’s the Big Three administrators who cop the most flak for the way they are governing the game, the implications of their actions cannot be ignored. South Africa, currently ranked number one in Tests, also suffers as a result and Kimber, one of the filmmakers, want this to change.

“Cricket is run for and by the three nations who already make the most money, to further their interests on and off the field. The ICC spent more money on shipping chairmen around the world for one of their events than South Africa get for being the best Test team at the end of the year,” Kimber told the Daily Maverick.

The ICC distributes 52% of its revenues to Australia, England and India, leaving the remaining 102 members to share 48%, but finances are just one of the concerns. In 2013, India cut short what should have been a full tour of South Africa, largely because India weren’t too chuffed with South Africa appointing Haroon Lorgat as their CEO. The response from the ICC was non-existent and South Africa lost a large chunk in revenue as a result. South Africa are not the only team who suffer, though. More and more, cricket is becoming exclusive and the pathway for teams outside of the top is blocked.

“South Africa is the best Test nation on earth, but look at the way they are treated off the field. They were treated like dirt by India, and no one at the ICC did a thing to fix it. It is disgusting. And it isn’t just them. South Africa is just one of the 102 cricket nations that the ICC is no longer run for,” Kimber explains.

“There is something wrong with cricket, it is shrinking, no other sports wants to shrink, but cricket does. What happens to South Africa in the new cricket world, what happens to all global cricket, does it become a production line for IPL (Indian Premier League) and county teams or does it grow?” he added.

The petition is by no means the first of its kind. In 2012, when South Africa toured England for a three-match series, a group called Testing Times demanded that the tour be extending to four Tests and said South Africa being handed only three Tests against England “signified the death of Test cricket”. Their demands, although admirable, were at their core somewhat elitist and they were quickly told where to get off.

But as cricket’s power continues to shift to an elite few, more and more fans are starting to pay attention. Earlier this year, cricket fan Nick Sharland started an online petition against the move to reduce the World Cup to 10 teams. It didn’t take long for the petition to garner more than over 20,000 signatures, but Sharland himself admitted that he didn’t exactly know what he would do once the petition reached its target of 25,000.

What is clear is that the conscience of cricket fans around the game is run is being pricked. The ICC’s continuous refusal to go for inclusion in the Olympics is another big sticking point.  Series without context, the greed of the Big Three and the blatant conflict of interest with those who run the game as a playground for their mates is also at the centre of the discussion. While it’s unlikely there will be a cricket spring any time soon, with the sport so reliant on the Big Three for its revenue, when the change does come, it’s going to come as an avalanche of retribution. DM