Encouraged by Burundi’s example, other African leaders plot to overstay their welcome 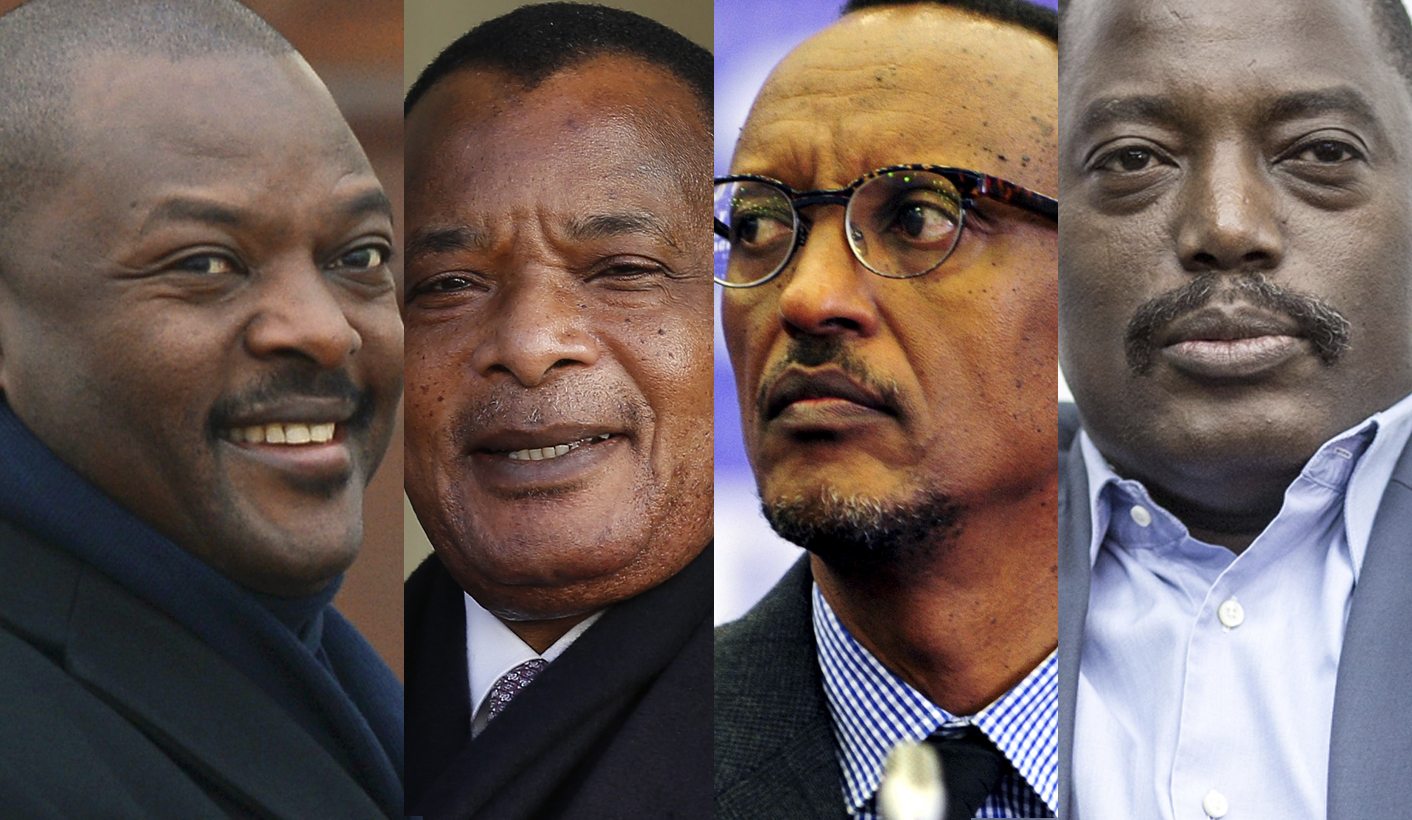 The African and international community may have condemned Pierre Nkurunziza’s successful bid for a third term in Burundi, but no one did anything to stop him. Already, the consequences of this inaction are being felt across the continent, as other leaders pave the way to fiddling with their own constitutions. By SIMON ALLISON.

The second danger was about precedents. The argument went something like this: if Nkurunziza was allowed to get away with a third term in office – a term deemed unconstitutional by almost everyone except his ruling party and his tame constitutional court – then it would send a strong message to other African leaders that they could do the same. It would, in effect, legitimise leaders seeking to overstay their welcome.

This fear is already being realised.

In Rwanda, President Paul Kagame’s ruling party is doing everything in its considerable power to change the constitution ahead of the 2017 presidential election. Both houses of parliament voted to support a constitutional amendment, while national consultations revealed an extraordinary – some might say suspicious – degree of support for the change. “Of millions of Rwandans consulted by lawmakers on the need to amend Article 101 of the constitution in the past few weeks, only 10 were against the idea,” reported the state-owned New Times.

In this climate, it is only a matter of time before the constitution is actually amended, and Kagame himself is growing more confident by the day. Replying to a Kenyan on Twitter who told him that he risked ruining his legacy, Kagame said: “Worry more about your own legacy … if you got any at all to think about!!” (sic). His confidence is not misplaced. With little domestic opposition, he knows that his only real challenge was to convince the international community that a third term is a good idea. But Burundi has shown him that the international community does not need to be convinced, because they are powerless to stop it.

In the Republic of Congo, a similar pattern is unfolding. Last month, President Denis Sassou Nguesso called a special national forum to discuss potential amendments to the constitution. These included scrapping term limits, and raising the maximum age for presidents. Sassou Nguesso has already been president of this central African country for 31 years and counting, but his proposed amendments met with hearty approval nonetheless (doubtless the forum participants were carefully chosen). Ironically, it was Sassou Nguesso himself who introduced term limits in the 2002 constitution.

On Tuesday, Sassou Nguesso revealed the next step in his re-election campaign. Without explanation, he fired Civil Service Minister Guy Brice Parfait Kolelas and Trade Minister Claudine Munari from his cabinet. But it’s not hard to read between the lines: Kolelas and Munari didn’t attend the national forum, instead choosing to go to a meeting calling for resistance to the proposed changed, organised by the opposition. Now they’re both gone from power, paving the way for more pliable ministers.

While Kagame and Sassou Nguesso both appear to be following in Nkurunziza’s footsteps, the Burundi example has also relieved pressure on leaders to introduce term limits. It was no coincidence that as things were heating up in Bujumbura, Gambia and Togo worked together to torpedo an Economic Community of West African States (Ecowas) proposal to introduce two-term maximum limit within the region. Even more recently, Ugandan President Yoweri Museveni dismissed the whole concept of term limits as a “non-issue” invented by people who wanted to burnish their CVs with fancy titles.

Another country to watch is the Democratic Republic of Congo, where President Joseph Kabila is widely expected to run again in the 2017 elections. If he won, it would be his third term in office, violating the constitution as it currently stands. Already, Kabila’s political opponents are mobilising around the issues. According to Reuters, the millionaire governor of Katanga province, Moise Katumbi, has hired a top American law firm to lobby the US government on this issue – trying to persuade them to push for Kabila’s exit.

The current concerns in Africa over third-term limits represent a sharp change in thinking around the subject. When Burkina Faso’s long-serving president was forced out of office in 2014 following  his attempt to alter the constitution in his favour, many thought the days of presidents-for-life were numbered. And indeed, across much of the continent, this is true. The real story to take from the failed Ecowas attempt to impose strict limits is not that two countries blocked it, but that 14 countries supported it.

Burundi, however, is a reminder that there’s still a long way to go on this issue. And that our failure, as a continent, to deal with Burundi effectively has paved the way for others to follow suit. DM