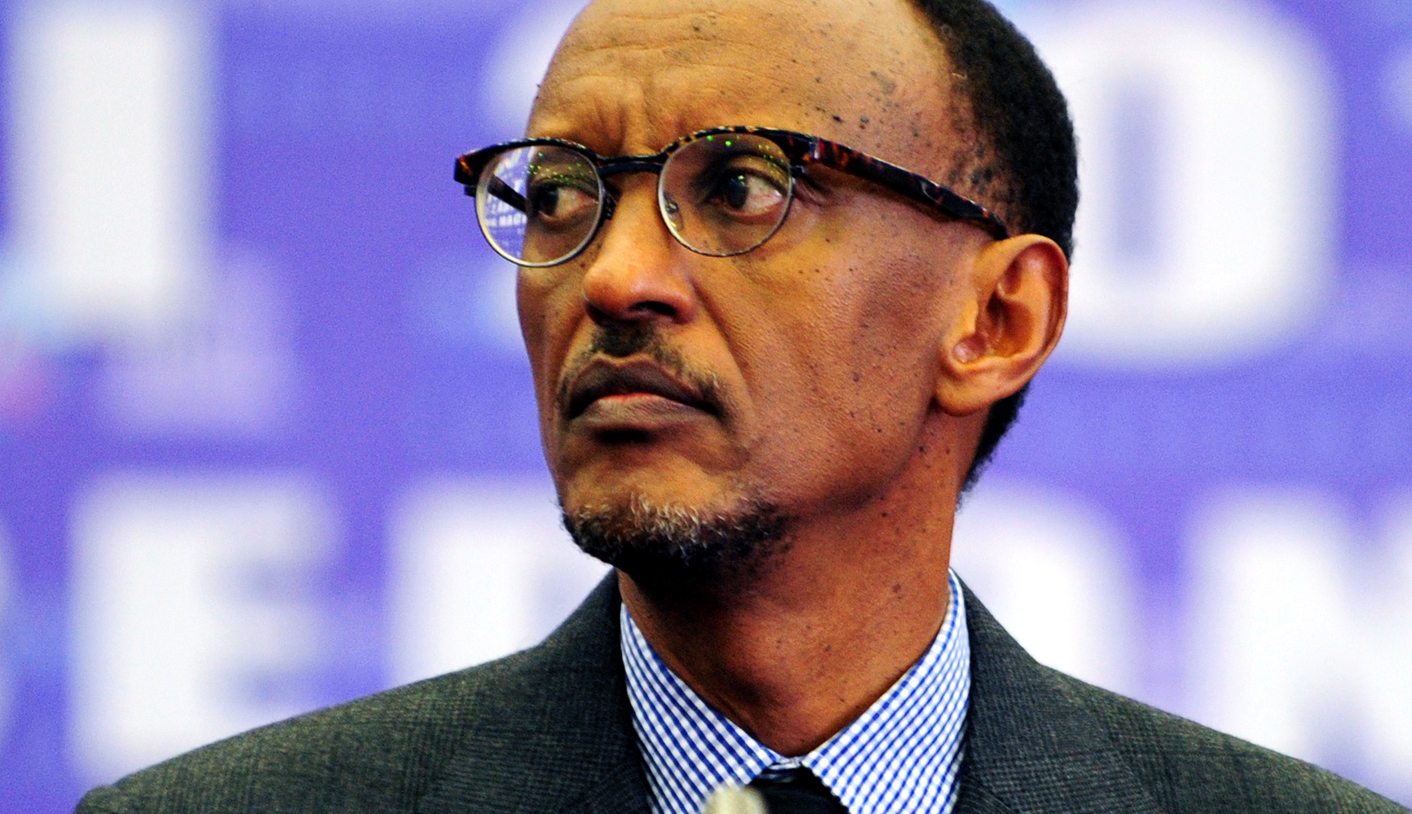 In Rwanda, enigmatic President Paul Kagame is carefully laying the groundwork for a third term in office. Now that lawmakers have voted to change the constitution in his favour, only a national referendum stands in his way – and if we know one thing about Kagame, it’s that he doesn’t lose popular votes. SIMON ALLISON looks at what this means for Rwanda, and why it’s more complicated than it looks.

Paul Kagame is playing it coy. The Rwandan president will neither confirm nor deny his intentions to run for a third term in office, but events on the ground tell their own story. First there was the extraordinary petition to remove term limits from the Constitution, signed by 3.7 million people (take that, Avaaz!). Then, this week, both houses of parliament voted to do just that.

The only hurdle that remains is a national referendum on the issue, which – given Kagame’s popular support, and his ruthless suppression of opposition – is a foregone conclusion. Everything points to another Kagame campaign in 2017, and another crushing Kagame victory.

Kagame is a polarising figure – and that’s an understatement. While his supporters refuse to admit his flaws, his critics are often just as blind to his achievements.

Perhaps the best way to describe Kagame is that he’s a means-to-an-end kind of leader. Yes, he led the insurgency which stopped the Rwandan genocide, but his forces committed their own atrocities along the way. Yes, he’s brought peace and stability to Rwanda over the last two decades, but only by exporting the conflict to the eastern Democratic Republic of Congo. Yes, he’s lifted hundreds of thousands out of poverty, and built health and education systems where there were none, but his administration has also locked up political opponents, abolished media freedoms and allegedly exiled assassinated political rivals (remember the murder in South Africa of former spy chief Patrick Karageya?).

What to make of this enigma, who decries the failings of international justice while counting Tony Blair as a close friend and advisor? How to react to the outsize ambition of a man who is simultaneously a darling to the international development community and a villain to the human rights crowd?

The answer, as always, is complicated.

Let’s start with the case for the prosecution, which begins in the context of an African continent that has suffered for decades from leaders who don’t know when to step down. Robert Mugabe, we’re looking at you. The scourge of dictators and presidents-for-life has crippled the continent, and many of its leaders know it: within the African Union, there is a growing faction calling for a continent-wide ban on third terms in office. Kagame’s third term would cripple this movement, and encourage others in a similar situation, such as the DRC’s Joseph Kabila or the Republic of Congo’s Denis Sassou-Nguessou, who are both in charge of countries with far more potential for volatility.

Closer to home, Kagame need only look to his neighbour Burundi to note that overstaying one’s welcome can have devastating consequences. Kagame has worked hard to ensure stability within Rwanda’s borders, and there’s a real risk that a third term could derail this – unlikely in the short term, as the state still maintains absolute control over political space, but perhaps in the long term it would serve as a rallying cry to his internal enemies. It also paves the way for a future Rwandan leader – one less benevolent than Kagame considers himself to be – to stay in power for as long as he or she likes.

Rwanda’s counter-argument, expressed to me by a Rwandan diplomat, is that it’s no one else’s business how they choose to govern themselves; that all constitutions are reformed at times, and that the government is strictly following the procedure to do so; and that the democratic will of the Rwandan people cannot be ignored (this last point, however, is largely invalidated given the country’s treatment of opposition parties and free media).

Rwanda also notes that term limits are not some kind of universal standard of governance. This is true: the German chancellor can stay in office as long as he or she likes, as can the British prime minister. Is this hypocrisy? Yes. Three terms do not necessarily a tyrant make. No one’s calling Angela Merkel a dictator, even though she’s eyeing a fourth stint. And ironically, David Cameron endured a storm of criticism within his own party when he ruled out running for a third term.

There’s another factor, which should not be underestimated: is Kagame the glue that binds Rwanda together? Would another leader be able to successfully navigate the maze of personal, political and ethnic rivalries which hover like a dark cloud over Rwanda’s peace and relative prosperity? For now, is transition more dangerous than continuity?

These are unanswerable questions, and the debate over Kagame will rage on. But perhaps Rwandans, with their bloody history, can’t be blamed for choosing the devil they know. DM

Photo: Rwanda’s President Paul Kagame attends at the fifth meeting of the Broadband Commission for Digital Development organized by Macedonian government in Ohrid, The Former Yugoslav Republic of Macedonia (FYROM), 02 April 2012. Kagame was attending a three-day IT conference, from 31 March to 02 April. EPA/GEORGI LICOVSKI