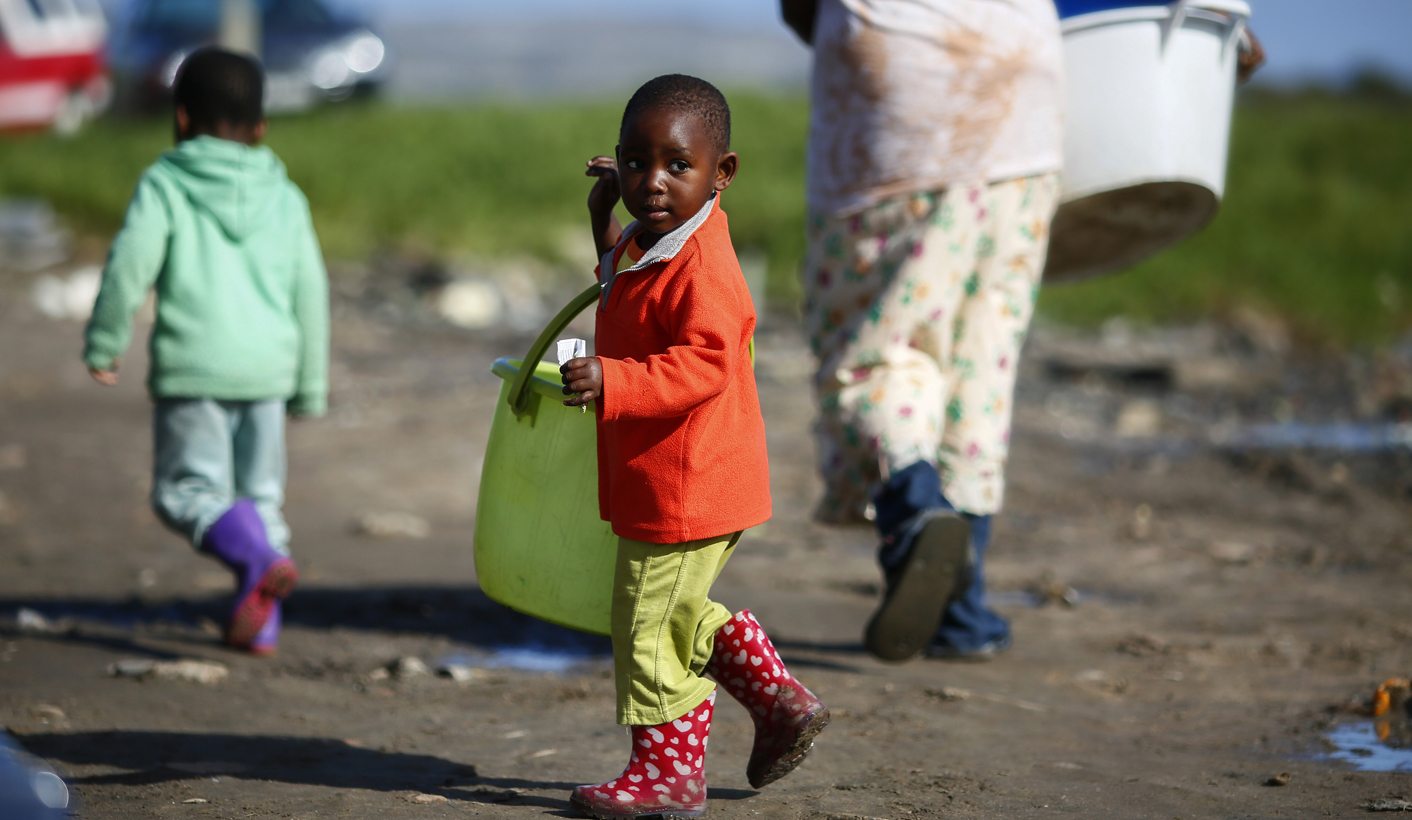 The most important phase of learning takes place in the first 1,000 days of a child’s life, and if that opportunity is missed, the damage can never be undone. Yet in South Africa, the lion’s share of our education budget is spent on tertiary education – the phase which delivers the least long-term benefits from the investment. Slowly, however, with the help of key players in government and nongovernmental organisations, early childhood development is starting to gain more attention. By MARELISE VAN DER MERWE.

At present, South Africa spends roughly 50% of the total needed to provide the essential package for early childhood development (ECD), according to Ilifa Labantwana, an ECD programme set up in 2009.

But the picture is slowly changing.

ECD is growing in prominence, one baby step at a time: a White Paper on ECD, a gradual increase in collaboration with the Department of Social Development. Ilifa Labantwana, among other organisations, is working to ensure that ECD receives the attention it deserves.

South Africa is not alone in this change in perspective. Last week alone, the US government granted Arizona an extra $20-million to spend on ECD and South Australia pushed ECD higher up on the agenda after PwC found that improving the quality of early childhood development of disadvantaged children alone would boost the national economy by $13.3 billion to 2050. “There are a lot of projects out there but few have the ROI (return on investment) of ECD, which offers a 10% annual rate of return,” Nobel Prize-winning University of Chicago Economics Professor James Heckman, a leading scholar in the area of ECD, has said. “You can simultaneously reduce inequality and increase productivity.”

Ilifa Labantwana is not asking the government to change direction in any major way, says communications manager Svetlana Doneva. Rather, they are working with the government in a sustainable way to create lasting and manageable change.

Ilifa Labantwana receives its paycheck from a handful of major funders, including the DG Murray Trust, which also funds SmartStart – the early learning initiative earlier reported on by Marianne Thamm. It is funded for three years at a time and is currently nearing the end of its second phase. For its part, it funds, manages and monitors other ECD bodies, such as Cotlands.

Ilifa Labantwana is also responsible for the well-publicised Innovation Edge social fund, which supports “bold ideas that have the potential to change the early learning landscape in South Africa”, according to its official description. To date the fund has supported, among others, the creation of a computer game for children with Foetal Alcohol Syndrome (FAS), a neuroscience research translation project, and a project leveraging the commercial model used for stokvels to communicate ECD-related messages to caregivers.

Innovation Edge programme leader Sonja Giese says the news is mixed when it comes to ECD in South Africa. Significant progress has been made since 1994: There was the introduction of the child support grant, now reaching 65% of poor children under the age of six; the provision of free basic health care – 94% of children in South Africa complete their primary immunisation course within the first year; and improvements in birth registration – 79% of children born in South Africa have their births registered within 12 months. “These are all great achievements to be celebrated,” says Giese.

However, too many of South Africa’s children are receiving inadequate stimulation in their formative years. “While progress has indeed been made since 1994, inequality in ECD remains at unacceptably high levels,” says Giese. “While 80% of children aged 3-4 years in quintile five (the richest quintile) have access to early learning services such as preschools or crèches, less than 40% of their peers in quintile one enjoy this basic right. Furthermore, of those children who do access early learning services, only one in six is supported financially through the state’s per-child subsidy.”

Inequality is a recurring theme in the research regarding ECD, nationally and internationally. Firstly, numerous studies have shown the effect of chronic or toxic stress on children’s cognitive development. In layman’s terms, the brain cannot use its rational, “thinking” system and its instinctive, fight/flight system simultaneously – so a child living in chronic stress, where he is constantly in fight/flight mode, will suffer inadequate cognitive development. Secondly, in situations where parents are working long hours, are stressed themselves, or are not able to spend much time with their children, the children may be inadequately stimulated. An initial study by neonatologist Hallam Hurt found that children living in poverty tended to have lower IQs; upon further probing, Hurt found that it was (obviously) not the poverty itself that determined the IQ but how much attention and stimulation the children received. Children who not only had more toys and books, but whose parents were able to spend more time answering questions, talking to them, praising them and kissing and hugging them performed better. Moreover, when the same children were tested again in their teens, there was a strong link between the size of their hippocampus and the nurturing they had received at age four, but no link with the nurturing they had received at age eight. The magic occurred in their early years.

“During early childhood the human brain goes through an incredible transformation,” says Giese. “At the age of two, a child has up to twice as many neural connections as in adulthood, and these are gradually lost or strengthened over time. The kinds of connections that are strengthened or lost will depend on the child’s early life experiences – positive, supportive experiences that make a child feel safe and stimulated will lead to strong neural connections in the parts of the brain that support learning and healthy emotional growth. Stressful, unstimulating early life experiences have the opposite effect on the developing brain, with disastrous long-term consequences for individuals and society. By providing appropriate early childhood development services, we can shape the architecture of the developing brain.”

In an early study similar to Hurt’s, child psychologists Todd Risley and Betty Hart found – according to the August 2015 National Geographic – that “children in well-off families — where the parents were typically college-educated professionals — had an average of 2,153 words an hour spoken to them, whereas children in families on welfare heard an average of 616 words. By the age of four this difference translated to a cumulative gap of some 30-million words. Parents in poorer homes tended to make shorter, more perfunctory comments, like ‘stop that’, and ‘get down’, whereas parents in wealthier homes had extended conversations with their kids about a variety of topics, encouraging them to use their memory and imagination. The kids in low socioeconomic families were being raised on a poor linguistic diet”. Unsurprisingly, the children with bigger vocabularies scored higher on IQ tests and did better at school.

Newer studies provide a more nuanced view. Children living in poverty are not doomed to perform poorly and be parented badly. Child psychiatrist Joan Luby recently concluded that an emotionally nurturing environment mitigates many of the negative effects of poverty on a child’s developing brain. In countries such as South Africa, where economic inequality is a serious problem, ECD programmes can offer stressed or busy guardians support to enable more contact and stimulation and better nutrition.

What about child-headed households or situations where one caregiver is responsible for many others’ children? Not a problem, says Doneva. Provided a child is nurtured and stimulated, development is facilitated.

At the moment, the minority of children have the resources to attend an early learning programme and just half of women receive follow-up care six days after giving birth. Furthermore, government support intended for the poorest children is not reaching those who need them most because of systems challenges, ie the way policy is put into practice.

However, ECD has recently been elevated to the level of chief directorate with the national Department of Social Development, and is a key focus area for the Department of Performance Monitoring and Evaluation in the Presidency. “The National Development Plan speaks to the importance of ECD and South Africa is in the process of finalising a national ECD policy and implementation plan which will inform revisions to the Children’s Act of 2005,” says Giese. “These all demonstrate high level political commitment to ECD.”

Challenges still include increasing food security, improving home nutritional support and improving conditions for malnourished children, since stunting currently occurs in a quarter of our children. Early language development is also significant, since recent statistics indicate just over half of Grade 3s achieved the 50% benchmark in language and only 36% achieved the benchmark in maths. Public awareness and government investment in ECD also needs improvement.

The great hurdle, however, is the sheer numbers in need. “The biggest challenge is probably the question of scale – there are about 1-million pregnant women in South Africa at any time and about six million children aged 0-6 years. How do we ensure access to quality ECD services for 7-million people, particularly when the vast majority are living in the poorest households and communities where access to the most basic services is often a challenge?” says Giese.

Importantly, the government and nongovernmental organisations alone cannot transform ECD, says Giese. At a panel discussion hosted by Innovation Edge last week, both Giese and David Harrison of the DG Trust said entrepreneurs and innovators at the fringes of the formal economy should be included in the discourse between corporate organisations, government and funding institutions.

“Few ideas come to fruition simply because there is no network of support around the innovators to assist them in getting their ideas off the ground,” Harrison said.

Giese points out that even though the government is prioritising ECD more highly, there will always be a need to work within a tight budget. “While greater financial and human resource investments are needed for ECD, the reality is that current fiscal constraints make this unlikely and we need to be smarter about how we use the resources we have,” she says. “There is lots of scope for improvement in this area.”

Heckman has argued that ECD is the clearest viable route for rebuilding broken economies. Doneva and Giese agree. In their view, with innovation from entrepreneurs, continued private funding and growing state support for their cause, the country could be painting a radically different picture in 20 years. DM

Photo: A young South African carrying a bucket for washing clothes walks along a mud pathway in the impoverished settlement of Masiphumelele in Cape Town, South Africa 18 June 2015. EPA/NIC BOTHMA.

Vincent Lali for GroundUp • 6 mins ago