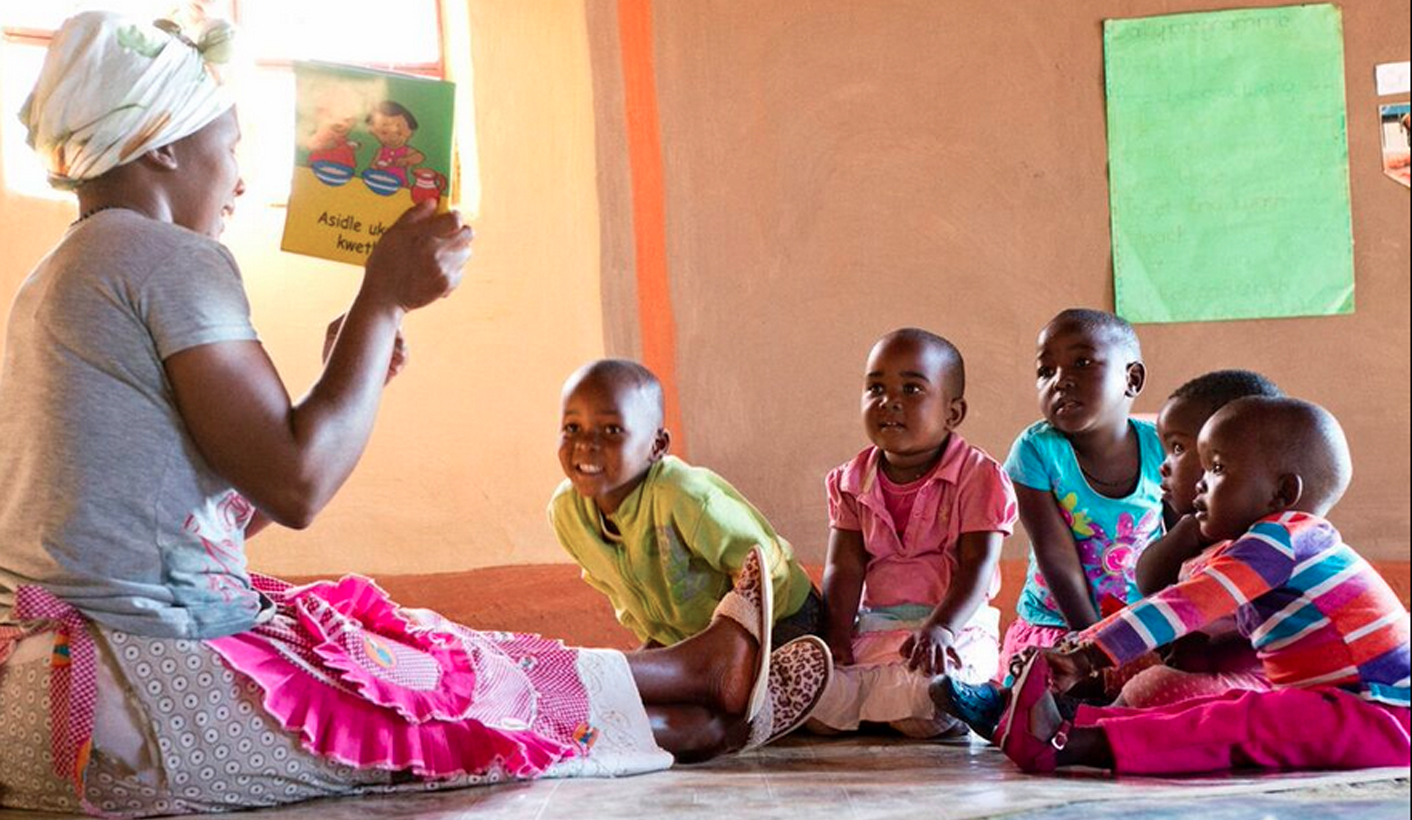 Today sees the launch in Pretoria of an ambitious public/private R60 million initiative aimed at supporting and extending a quality early learning experience to the poorest percentage of the country’s children under the age of five. SmartStart, a social franchise, will support day mothers, parents, communities, playgroups and childminders in four provinces. It is an intervention that could have a significant impact on future education outcomes. By MARIANNE THAMM.

The first five years of a child’s life are vital in creating the internal developmental architecture that will later determine the future trajectory of that child’s existence. How a child interacts with care-giving adults, how she or he is socialised, challenged, stimulated and nourished is crucial to how that child will later enter the formal education system.

Considering current worrying public education outcomes in South Africa, it is unsurprising to learn that this formative stage of education to the majority of South African children is provided mostly by NGOs, private care givers, informal playgroups and often in unregistered and informal care centres dotted around the country.

And while new national policy for early childhood development accepts that all of the country’s children must have access to quality early learning, this will require specific systems to reach poor children who do not attend registered preschool centres. Only half of the country’s three- to four-year-olds attend learning programmes outside of their family homes and in most cases, where they do, the quality of this education poor and does not prepare them for school.

While government has, over the past three years, doubled its allocation to early learning through per capita subsidies, no system exists to bring or extend services to the children who need it most.

And so it was that Carol Ann Foulis and Justin Jowell – two women with long track records and experience in the childhood development sector – arrived at an apparently simple solution aimed at creating a standardised delivery mechanism that will extend quality early learning experiences to the poorest 40 percent of the country’s children.

Working in the sector with the DG Murray Trust – a private philanthropic foundation – Foulis and Jowell found that unlike primary or secondary schooling or health, there was a void when it came to a universal and unifying programme to train and support individuals, teachers, parents and communities involved in Early Childhood Development (ECD).

Inspired by Tina Rosenberg’s 2011 best-seller, “Join the Club”, which explores how offering peer support can alter the lives of communities and individuals, Foulis and Jowell, together with DG Murray Trust director, David Harrison, and in consultation with various NGOs in the field, developed the concept of a new social franchise, the SmartStart Early Learning Programme, that is being launched at Freedom Park in Pretoria today.

“We found that parents are generally willing to pay for the care of their young children but most were not aware of how to assess the quality of that care or education,” Foulis told the Daily Maverick.

Said Jowell: “Adult/child interaction is at the heart of early learning and our challenge was how to turn on parents and care givers and support and enable them to participate in the process. Our challenge was also to convince NGOs, who are all struggling for recourses, to co-operate in implementing the programme.”

Social franchising employs the packaging and branding of commercial ventures but not for profit. The South African HIV/Aids campaign LoveLife is one such example locally. The SmartStart programme will offer parents and caregivers standardised materials, training, support and monitoring and hopes to reach at least one million three to four-year-olds who are not cared for in out-of-home early learning programmes.

A care centre that becomes part of the SmartStart programme will guarantee a standard of engagement with children but without any additional cost to the existing structure or configuration of that centre.

The DG Murray Trust, a private foundation, and the Yellowoods/Hollard Foundation, a private investment holding company, supported the initial development phase of the SmartStart programme. The Hollard Trust is partnering with local governments in Gauteng to offer support to a network of childminders, to deliver services and also to run sustainable early childhood development enterprises in that province.

The DJ Murray trust is also one of two funders of Ilifa Labantwana, which works with national, and several provincial departments of Social Development.

The SmartStart programme has secured commitments totalling R60 million for the next three years. This will enable the establishment of 3,000 franchisees – playgroup facilitators and childminders – across the country by 2018.

“We estimate that a fully funded social franchise reaching 1 million children would cost about R2.5 billion a year. Put in perspective, that amounts to roughly one percent of the annual budget for basic education. Based on strong evidence of similar programmes across the world, South Africa should get at least ten times a return on its investment,” reads the SmartStart briefing note.

The programme will focus on three key areas and outcomes; the ability of children to form close relationships that “make them happy and give them the confidence to shine”, that every child should be a thinker and communicator, and that each child should develop core skills of self-control, perseverance and flexibility.

International research has indicated five elements to successful early learning programmes: nurture, talk, play, stories and parent partnerships, and these are the five pillars of SmartStart.

Over and above this is the vital encouragement of parental support through information-sharing workshops, where caregivers will be encouraged to recognise “what they already know”.

The rollout of the SmartStart campaign could not arrive at a more crucial moment in South Africa, as studies have found that worrying numbers of children entering the schooling system are just not ready. Early childhood learning is a “game changer” which can help to alter the trajectory of a child’s schooling life.

If education is key to securing the future of this country, then this timely SmartStart intervention – as it rolls out across the country –will begin to help children who are in most need make, with simple interventions, a giant leap. DM

To find out more about SmartStart or how you can get involved, visit – www.smartstart.org.za