Water-shedding: Feel it, it is (almost) here 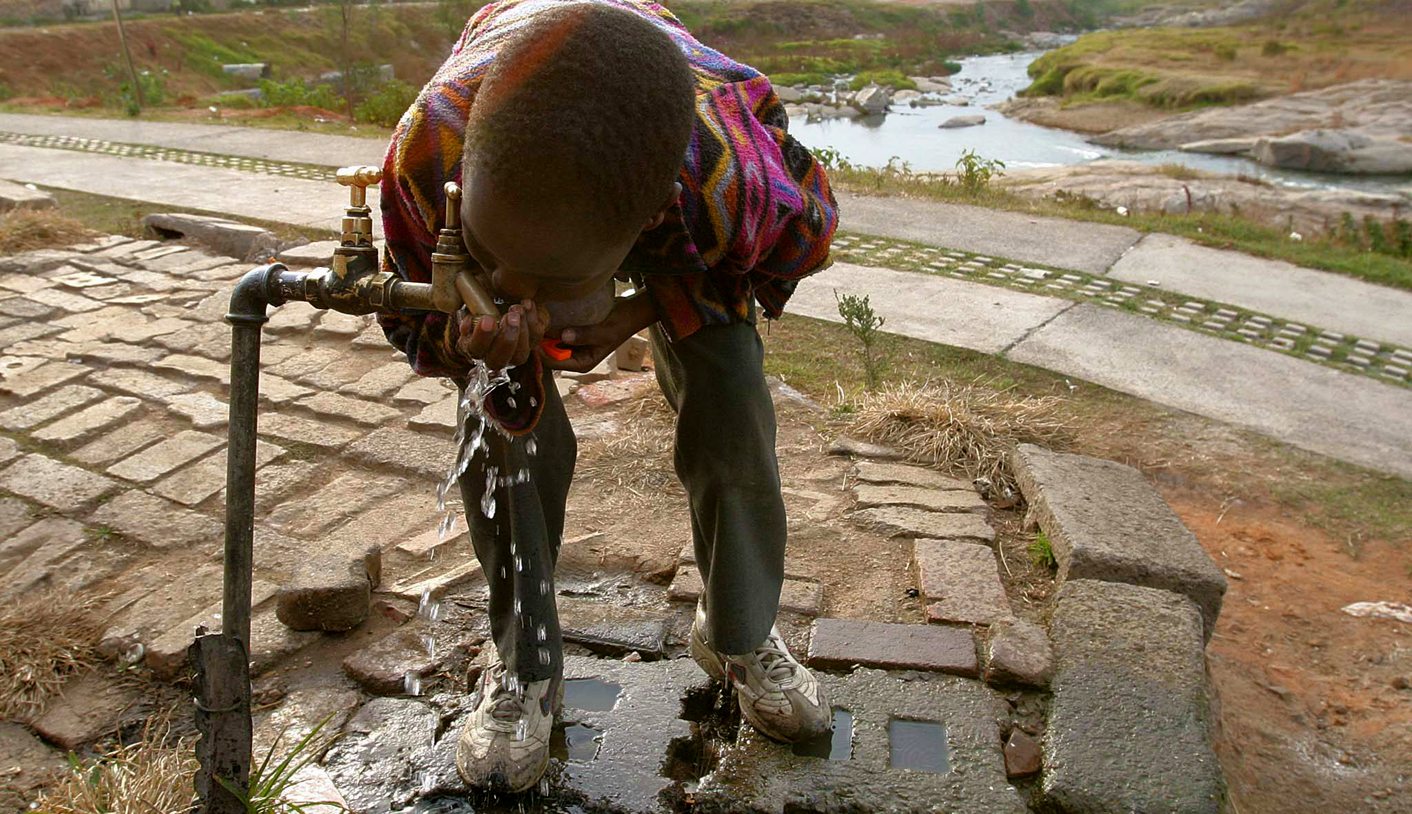 If you think load-shedding is bad, brace yourself for water-shedding... coming to a tap near you. South Africa is fast running out of water, with the worst drought since 1992 leaving dams at critical levels and diminishing rivers and streams. By NIKI MOORE.

The reason for any potential water shedding is almost a mirror image of why we have load-shedding. Since 1994, millions of people have been added to the water grid with very little thought being given to increasing the capacity of water storage or water intake plants. Combined with mismanagement of water, non-payment for water, huge water wastage through lack of maintenance and neglect, and poor governance through corruption, we are facing a high noon of water shortages that might start affecting us in as soon as a few months.

Smaller municipalities are going to be hit first, and hardest. The Kannaland Municipality (Caltizdorp) has a month of water left. Parts of KZN – northern Ethekwini, the South Coast, the rural north – are facing water restrictions as dams dry up. Much of South Africa is about to be declared an official drought zone. Even where water utilities have access to adequate water supplies – such as the Lesotho Highlands Water Scheme and the Midmar Dam – the strain will be immense. Water will have to be pumped from large dams to smaller dams; pollution will increase in rivers and dams as the water level decreases, water tables will drop as people pump more from boreholes.

While the current crisis can be blamed on the severe drought, there is a large element of bad governance as well. Twenty years of municipal mismanagement has come home to roost, meaning that between 50% and 70% of our fresh water is being wasted through burst pipes, malfunctioning pumps, broken taps and reckless water use (the ‘acceptable’ global figure for non-revenue water is 30%). Adding to our water woes is an historical accumulation of bad waste-water treatment: fully half of our waste-treatment plants are operating below average standards and fully a third are critical. Fresh water is needed to flush out the pollution of raw sewage oozing into our dams and rivers, and a drought will concentrate effluent to dangerous levels.

Leading the water-shedding charge is the Ugu district municipality in southern KZN, where it was announced through the local newspaper on 4 June that some areas would have water ‘restrictors’ installed while in other areas there would be scheduled water interruptions. The two local municipalities hardest hit would be Umuziwabantu (Harding) and Vulamehlo (inland from Pennington).

In order to prevent more widespread water shedding, Ugu is asking households and businesses to reduce their water consumption by 30%. This is bad news for the region’s most important industry: tourism. Holiday-makers don’t like unflushable toilets and dry taps.

But the water shortage is nothing new. For the last ten years, the South Coast has experienced water problems during peak holiday season as the influx of visitors puts a strain on the water grid. The rainy season has usually been counted on to refill the dams and flush out the pollution, but this year the rains did not arrive. What did arrive: a huge headache for the South Coast’s water utility, the Ugu District Municipality.

“The main problem,” says the DA Ugu South Constituency Head Dr Rishigen Viranna, “is that for the last twenty years Ugu has been expanding water supply to rural areas and townships, and adding thousands of users to the water grid, which is its mandate. The DA supports that, except that they have not planned to upgrade the main water sources, which are two water plants on the Umzimkulu and Umtamvuma Rivers. As more people have been using water, the capacity of the two plants has come under more and more strain. The two plants supply 28Ml of water per day. In peak season they run over capacity at 38Ml of water per day. But the Ugu region needs 40 Ml of water per day at all times. With the plants running at full capacity all the time, there is no downtime for repair or maintenance.”

AfriForum has also taken on the water crisis in Ugu. “Months ago we asked the Ugu District for their water maintenance plan,” says Hibiscus Coast AfriForum representative Wessel Pretorius. “But either they don’t have one, or they just don’t want us to see it. We actually wanted to help. We can call on the expertise of around 80 retired engineers and technical experts here on the Hibiscus Coast, but they don’t want to work with us.”

At the moment the three dams in Ugu are less than half full and thousands of people receive water from tankers as their only source. Towns such as Harding and Murchison, just outside Port Shepstone, had water riots earlier this year because of water shortages. (The real reason, says locals in Harding, is that frustration about poor service delivery and the lack of water finally overflowed when it was revealed that the mayor had bought herself a new car for R1 million).

“We have been disappointed with poor water supply for a long time,” says Murchison local resident Samkelo Ndwalane. “Water comes on for only a few hours a day, and then it is dirty and full of mud. In July last year, after several weeks for no water, a group of us got together and asked the mayor, ND Gumede, to come and see us to explain. She did not come. The community got angry and wanted to close the N2, but instead we asked the local chief to request the mayor to visit. Again she did not come. By that time the community was very angry. There were about 5,000 of the people by then, and they decided to close the N2.” The highway was closed for a week.

Service delivery protests around the country have begun to focus more and more on water supply. Water Affairs Minister Edna Molewa said in a breakfast briefing on May 20 2013 that unless our water resources were better used, there was a risk of ‘running out of fresh water’. The following day she told Parliament that the dangers of a water shortage had been exaggerated and that ‘South Africa will not run out of water in the next 100 years.’

But scarcity of water depends almost entirely on where you live. Mature and functioning water supply systems, such as Rand Water and Umgeni Water, which serve the large metros of Gauteng and KZN respectively, have multiple water sources in case of drought. The real problems – and the potential for massive civil unrest over a lack of water – lies in the smaller municipalities where a single or finite water source has been compromised by poor management and corruption.

For instance, the Ugu district actually has plenty of water. The area is bracketed by two massive rivers. There are a number of dams that can be topped up. It is a lack of planning that has created the current shortage.

A staff member at the Ugu head-office, who refused to be named, said that the Ugu water management was extremely worried about the water shortage. “They are probably more concerned than the residents themselves,” he said. “They have a long-term plan, a short-term plan, and a medium-term plan.” However, it was impossible to find out what this plan was, as neither the municipal manager DD Naidoo, the Head of Services for Water and Sanitation Lungile Cele, or the municipal spokesman Francis Zama, were available for comment.

“Ugu is doing their best and things are improving,” said the head of the Hibiscus Coast Ratepayers Association Bruce Hulley, “despite a twenty-year backlog of neglect. Things are getting better.”

The same cannot be said for other areas in the country such as North West, Limpopo and Mpumalanga, where water supply has broken down completely and the population rely on expensive water trucks. In some cases, such as Brits, the water plant has allegedly been deliberately sabotaged so that councillors can benefit from water-trucking tenders. In Mpumalanga, and especially Ermelo, the problem is non-existent maintenance of infrastructure so that water is maddeningly sporadic through constant burst pipes. A countrywide problem is standpipes in rural areas and townships that are either broken, stolen or simply left running until reservoirs run dry.

The majority of township and rural residents declare that they would not mind paying for water as long as a secure and reliable source is provided. Whether this declaration will stand the test of billing remains to be seen, but it is certainly true that many people pay for water anyway… in many rural areas there is a brisk trade from the owner of a borehole selling water to the neighbouring community, or a local chief who holds the keys to the taps.

Last month the Department of Water Affairs launched Water Week, stressing the importance of conserving water in the face of a national shortage this year. Their theme was ‘What if this were the last drop’. That is a sobering thought for anyone who has suddenly found a dry tap due to a pipe burst, and it is a daily reality for millions of people throughout South Africa. It could become a daily reality for us all. DM

Photo: A young boy drinks water from a tap metres from the Juskei river that runs through Alexandra township in Johannesburg not knowing that it is the most polluted river in Southern Africa and this mostly because of human waste. EPA-PHOTO/EPA/KIM LUDBROOK