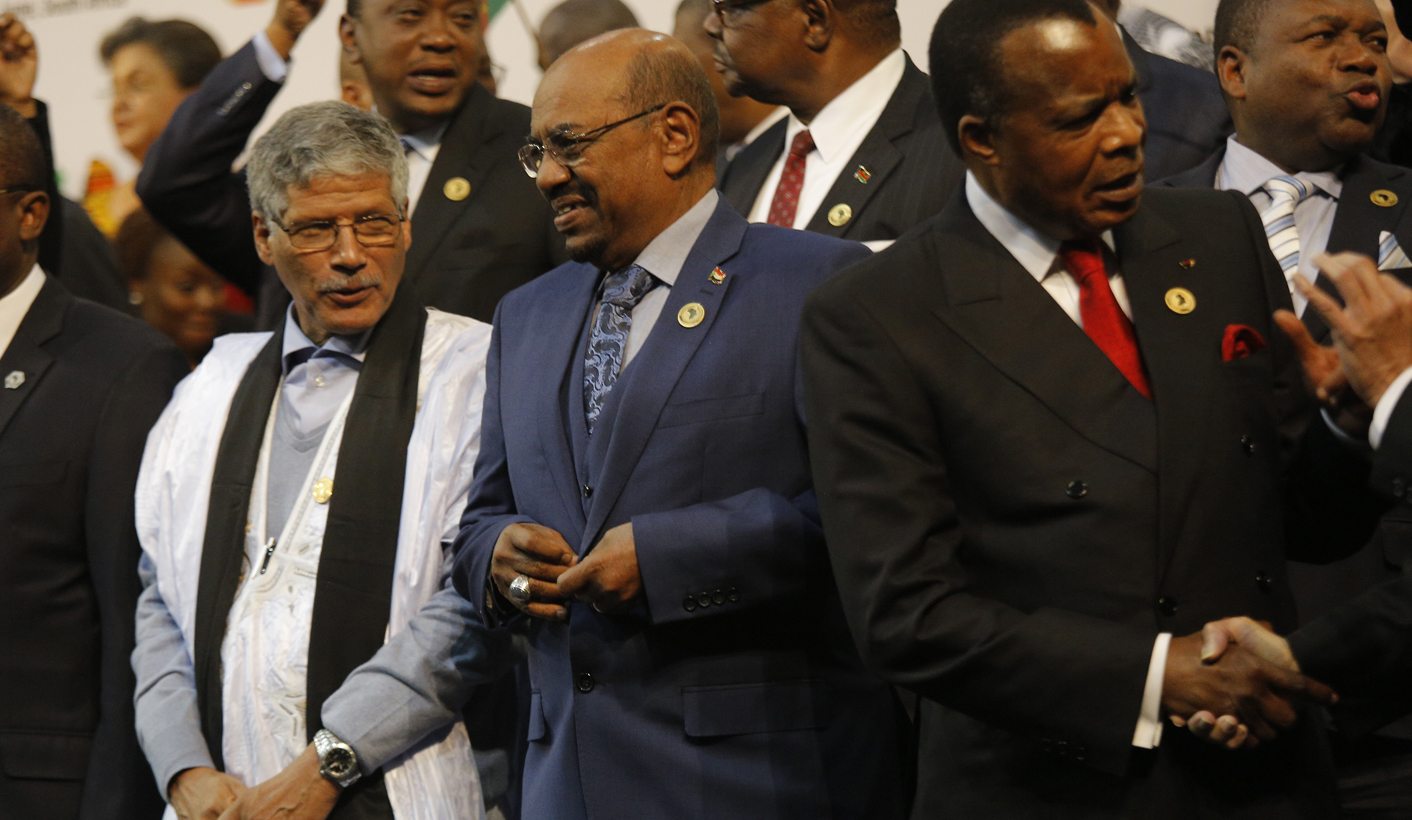 Forget Sepp Blatter. The biggest and baddest international fugitive of them all is in South Africa, and our government has just rolled out the red carpet for him. Civil society is protesting furiously and the courts are likely to issue an arrest warrant, but this won’t stop Sudanese President Omar al-Bashir from flying home on Monday. So what does this mean for the international justice project in Africa? And what does it tell us about the state of South Africa? By SIMON ALLISON.

It was mid-morning on Sunday before anyone actually laid eyes on him. He’s here. We knew he was coming, of course, ever since Sudanese media leaked the news that their president was boarding his jet, and that the jet was Joburg-bound; ever since the pictures on Twitter of that jet parked on the OR Tambo apron on Saturday night; ever since the name Omar al-Bashir appeared as a speaker on an official African Union program.

Still, the sight of that shiny bald head and the trademark glasses was a reality check. He’s really here. One of the most wanted criminals in the world is on an escalator in Sandton Convention Centre. And while there may not have been a physical red carpet in sight, there’s no doubt that he was walking on one.

It would be unfair to blame our sense of shock on Bashir, however. He’s a known quantity; a bad guy par excellence, a villain among villains (and, let’s be honest, there are enough villains wondering round the corridors of this the 25th African Union Summit). We know he likes to fund and arm ethnic militias to fight in his name; we know he likes to imprison, torture and execute his enemies; we know he likes to roll cluster bombs from old Antonovs onto unfriendly towns and villages, be they in South Sudan, Darfur, or South Kordofan.

No, Bashir hasn’t surprised us. But South Africa has.

There was a time, not so long ago, when South Africa promised a revolutionary new approach to foreign policy. It was Nelson Mandela’s fault, of course: in his iconic Foreign Affairs article, he said that South Africa would value human rights above all else, that national interests would take a backseat to the promotion of peace, prosperity and democracy. He also said, and I quote: “That considerations of justice and respect for international law should guide the relations between nations.”

It was never going to be easy. At times, South Africa tried to live up to Mandela’s ideals, especially through Thabo Mbeki and his efforts to effect the African Renaissance, and our contributions to peacekeeping across the continent; and at times, South Africa failed. But by welcoming Bashir to our shores, we have ceded the moral high ground once and for all.

Now Bashir, with an outstanding arrest warrant from the ICC dangling over his head, is on South African soil, at our invitation – and we’re going to let him go. The ICC wants Bashir for genocide; the South African government wants him to make their hosting of the AU Summit less awkward. Priorities.

But don’t lose all heart, South Africans. The rot runs deep, but not as deep as you might think. For one thing, the civil society response has been magnificent. A special shout-out goes to the Southern African Litigation Centre, which was ready within hours of Bashir touching down to start court proceedings.

For another, South Africa’s judiciary – with a better appreciation for both domestic and international law – has so far proven that it stands strong against pressure from the executive on this issue. On Sunday, in response to SALC’s application, Judge Hans Fabricius issued an emergency order preventing Bashir from leaving the country until the court had decided whether to issue an arrest warrant. The case will continue at 11:30am on Monday, at the Pretoria High Court – if, that is, Bashir is still in the country, which is by no means a sure thing.

Who would really prevent Bashir from leaving? And if he is still here tomorrow, what happens if the judge issues that red notice to SAPS? Will anyone really arrest him? A disconnect exists at the very heart of this country which means that the executive no longer considers itself bound by other branches of government. It can freely, and without consequence, ignore both the legislature and the judiciary at will. The separation of powers which underpins our constitution has become dangerously, perhaps fatally, imbalanced.

It’s not just South Africa which will experience the consequences of this latest abuse of executive authority. For a long time, South Africa has been the ICC’s only heavyweight supporter on the African continent. In welcoming Bashir, we have just withdrawn that support in the most public fashion possible.

We all know the ICC is far from perfect, but at least it is actively pursuing justice in Africa. It should not surprise us that this doesn’t appeal to the continent’s leaders, many of whom have been vocal in their criticism of the court. Too many of them have too much to lose. But to the ordinary African, the ICC is one of the few sources of justice available for crimes against humanity, war crimes and genocide. African alternatives such as the African Court of Justice and People’s Rights, as appealing as they may sound, won’t be ready for a long time to come – if the AU can ever scrape together enough cash and political will to make it happen.

That’s why seeing Bashir on South African soil was so deeply shocking. It’s hard to escape the feeling that international justice in Africa has just received a mortal blow; it’s even harder to deal with the realisation that South Africa delivered it. DM