Nxasana out; Number One wins again 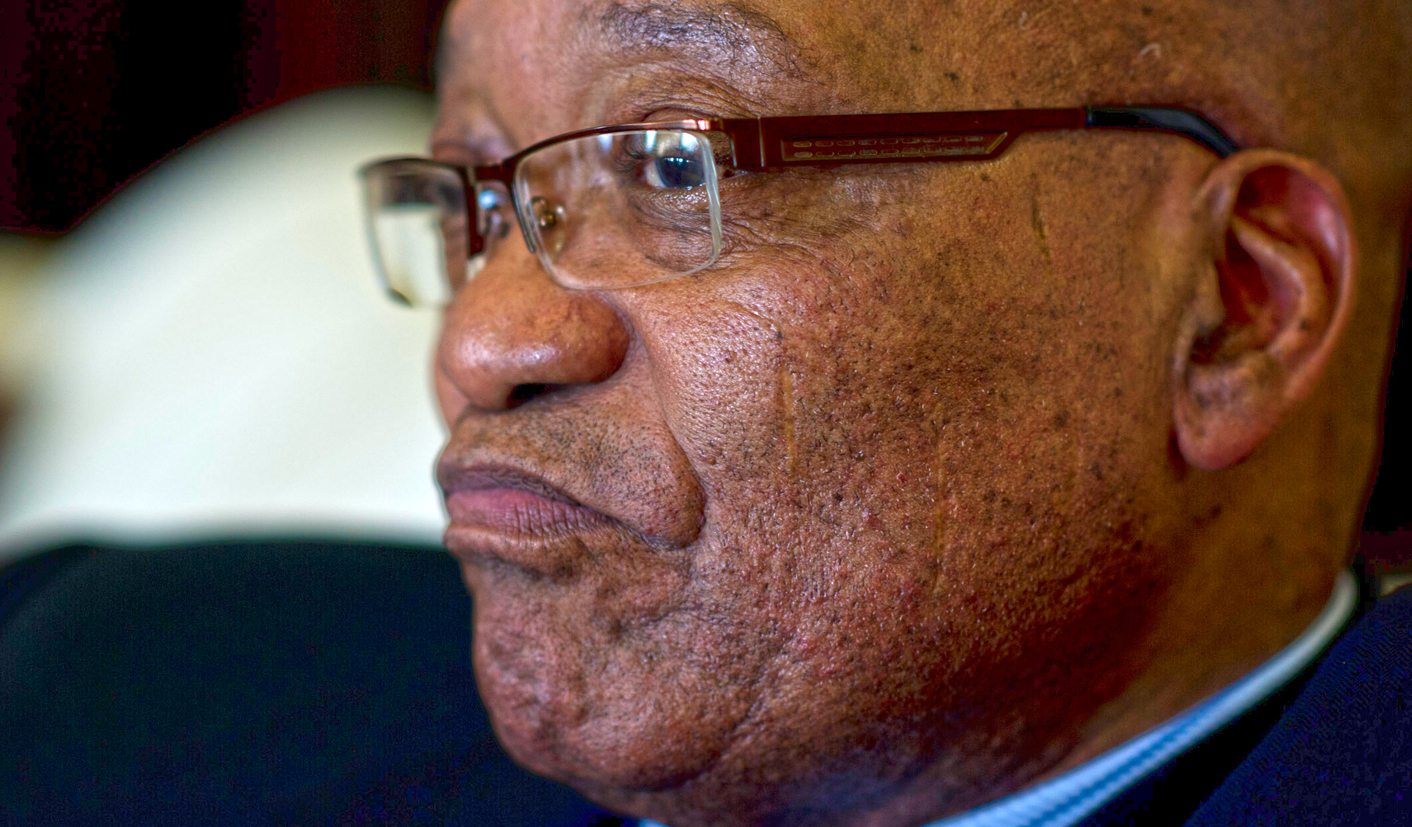 The Presidency has now confirmed that the National Prosecuting Authority, once again, is without a permanent head. Mxolisi Nxasana is now leaving, after “reaching a settlement” with the Presidency. His predecessor, Menzi Simelani, of course should never have been appointed in the first place, as he was not “fit and proper” for the position. Nxasana himself is leaving after President Jacob Zuma started, but then cancelled, an inquiry into whether he was fit for office. This final decision tell us many things about the NPA, confirms once again many suspicions about Zuma, and suggests, again, that Advocate Nomgcobo Jiba is protected by the highest person in the land. In one sentence, down the rabbit hole we go, deeper and deeper. By STEPHEN GROOTES.

On Sunday morning, the Presidency released its statement confirming the resignation of Nxasana, confirming a story in the City Press that Nxasana was going. In the statement it says that “The Government recognises that Mr Nxasana is professionally competent and possesses the requisite experience and integrity required to hold a senior position.”

It is this line which demonstrates the sheer disingenuousness of the entire situation. The Presidency had earlier instituted an inquiry, to be led by Advocate Nazeer Cassim, into whether Nxasana was “fit and proper”. That inquiry was then cancelled, literally at the last minute. At the time we suggested that it was literally “imposing chaos upon disorder”. It became clear, then, that it had been cancelled because Cassim had explained exactly to the various parties what the main issues would be in the inquiry, and thus the Presidency suddenly realised it would probably find Nxasana was “fit and proper”. And, because the thing Zuma fears the most is an NPA head who cannot be suspended and who has a grudge against him, action had to be taken.

The Presidency, of course, didn’t explain itself in any way, merely stating the two parties were talking. Then, it emerged through various quarters that Nxasana was refusing to leave unless one of his deputies, Advocate Nomgcobo Jiba, and the head of the NPA’s Specialised Commercial Crimes Unit, Advocate Lawrence Mrwebi, left too. Now, it appears, Nxasana too has his price, and has simply agreed to leave.

The Presidency will not confirm the price of Nxasana, it says simply that it “cannot answer questions about the settlement”. Nxasana, presumably, is locked into a non-disclosure agreement, and is unlikely to reveal his own price. Most of us don’t like to discuss our price in public.

As the head of Freedom Under Law, former Constitutional Court Judge Johann Kriegler put it to EWN on Sunday afternoon when asked for his reaction, “It is not with surprise, but certainly horror; it is the third honest man who has been forced out of office, out of a vital office.” Like the national audience of the comic opera performance of Police Minister Nathi Nhleko last week, absolutely no one was surprised. We all knew, all of us, that in the end, Number One was going to win this round too; that Nxasana, in the end, was going to have to leave.

The reason for this may not actually be just the price of Nxasana; the money that should have been used on schools and hospitals that went to his retirement. It took Number One almost a year to appoint Nxasana to the post of NPA head – it had been left vacant since Simelane had stood down following a Supreme Court of Appeal ruling. Zuma himself had promised, in his State of the Nation Address, to “fill the upper echelons of the criminal justice system” urgently, but it still took another eight months for him to do so. And in the end it was only after the Council for the Advancement of the SA Constitution started a court application to compel him to do so that he actually appointed Nxasana.

It is now abundantly clear why Zuma appointed Nxasana. It wasn’t just because he was independent, or not independent. Zuma had to get around the Constitutional Court’s Simelane judgment, so he could not just appoint a lapdog. Instead, he had to find someone who had something they would prefer hidden, something that could be used to get them out when the need arose. And, when the need arose to get Nxasana out, out he got.

It is interesting to note at this point that Zuma has not done what would probably has suited him the most, and appointed Jiba as acting NPA head. Instead he has appointed Silas Ramaite. Jiba has always appeared to be Zuma’s person in the NPA, she has ensured that charges were withdrawn against former Police Crime Intelligence head Richard Mdluli, ensured the NPA did not hand over the Zuma Spy Tapes to the DA, and then, amazingly, tried to press charges against the head of the Hawks in KZN, Johan Booysen. In all of these cases, judges have strongly criticised her conduct. And never forget that it was Zuma who expunged the criminal record of Jiba’s husband, Booker Nhantsi, so he could take a job at a municipality.

Zuma himself is the only person with the legal authority to act against her, but has spectacularly failed to do so. And, when asked why no action has been taken, has responded with an answer so nonsensical that it deserves to be repeated here:

The appointment of the National Director of Public Prosecutions and his/her Deputies are informed by weighty considerations which are determined by the prescripts of the Constitution, other legislation and the rule of law. The Presidency is aware of the judgements to which you refer and in consultation with the Minister of Justice is giving consideration thereto in order to determine whether any interventions are permissible and/or warranted.

You are equally no doubt aware that the General Council of the Bar of South Africa has also initiated proceedings which appear, on the face of it, to incorporate much of the judicial comment to which you refer. The doctrine of Separation of Powers allows for exchanges between the Judiciary and the Executive, none of which detracts from their respective functions, duties and responsibilities which must be exercised minded as we all are of due process and the safeguard of individual rights.

Uppermost, the interventions of the President will be determined by a need to safeguard and preserve the integrity and independence of the National Prosecuting Authority.

It is presumably because of these rulings against her that Zuma has not appointed her as acting head of the NPA once again. It would be a step too far, even for him, and open to legal challenge. That said, the fact that Jiba and Mrwebi are staying at NPA tells us all we need to know about why Nxasana is going.

It is sometimes forgotten that the NPA, and our judges, are the only thing that stand between us and anarchy. That may sound like hyperbole, but consider this. Without laws, the mightiest always wins. Is South Africa, he who is politically the strongest can do what he wants. With the NPA, and the Hawks in disarray, with the police that are inefficient and plagued with multiple problems, the mightiest can do whatever they want indeed, and for a long time.

In the end, Zuma’s performance in Parliament last week starts to make perfect sense. The “Nkaaaandla”, the dancing, the trademark laughter, the arrogance. Behaviour that is not presidential. The very mark of a man who doesn’t have any check to fear, who can do what he wants. Who is not afraid of anything, because he controls it all.

Watch: President Zuma in Parliament on ‘Poverty of Opposition Politics’

It is the mark of a man who’s dancing while the country’s infrastructure is crumbling.

It is the mark of a man who laughed after an appalling act of violence in the National Assembly that saw elderly men and women being forcibly removed.

It is the mark of a man whose best friends were able to use an airforce base as their personal garage. And then appoint as an ambassador the man who arranged it.

It is the mark of a man who has done almost nothing to improve the country during his time in office.

It is the mark of a man who laughs his way through his presidency, who is so out of touch with the lives of ordinary South Africans, he is surprised to find they live in informal settlements.

It is the mark of a man who will be the country’s president for many more years, but has long ceased being its leader. DM