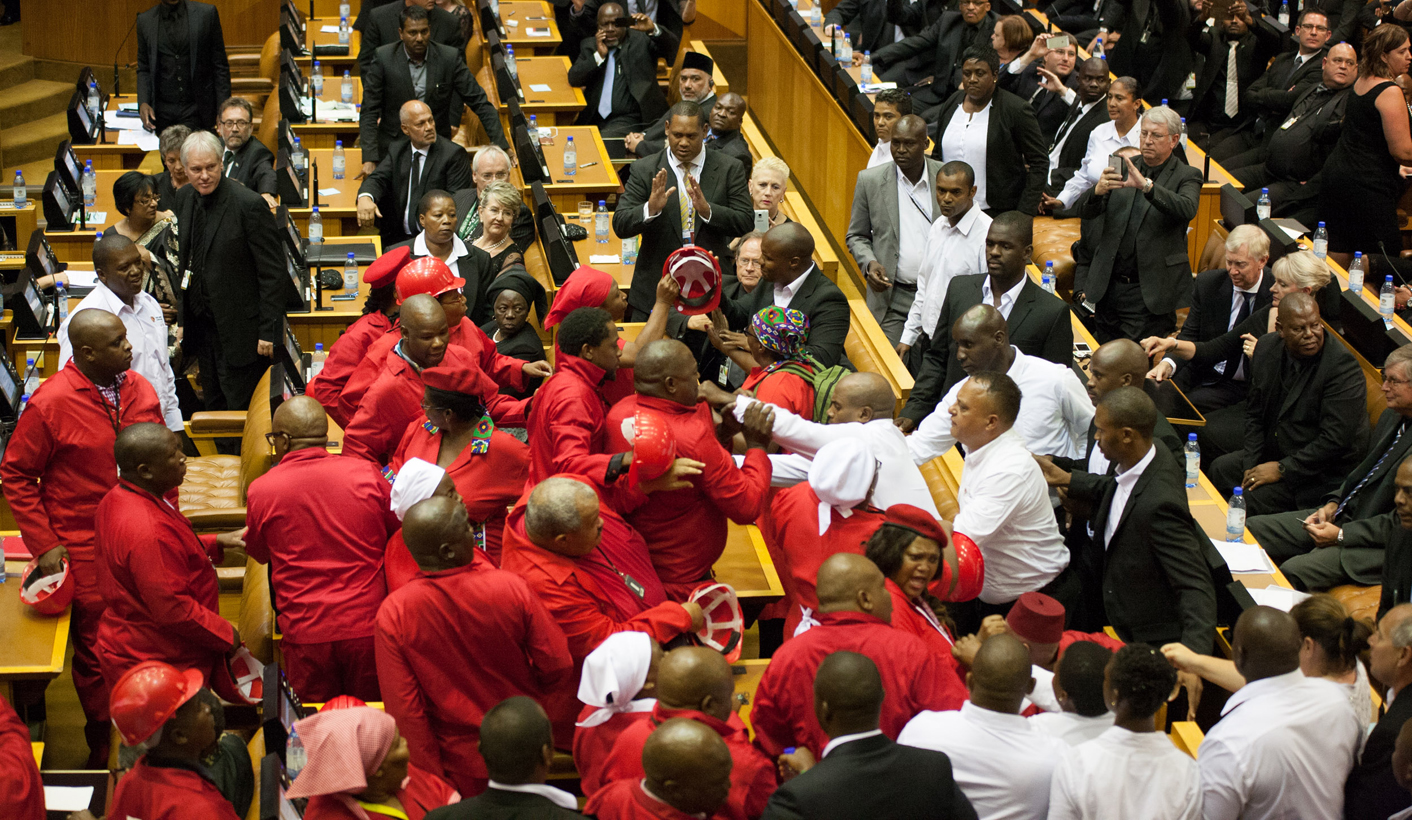 Does a member of Parliament count as a ‘person’? This may sound like the first half of an insulting riddle, but its legal resolution is critical to deciding whether it is permissible for police to be deployed in the National Assembly. Lawyers for the government argue that the Speaker was within her rights to call in police to eject Economic Freedom Fighters MPs during the State of the Nation Address. The Democratic Alliance wants a ruling that will ensure it never happens again. REBECCA DAVIS was in court.

The Democratic Alliance (DA) is seeking legal clarity on whether the Speaker of the National Assembly is indeed permitted to call in security operatives, including police, to forcibly remove members of the Parliament from the House. Most recently, this occurred during February’s State of the Nation Address (SONA), where Speaker Baleka Mbete called on security to enter the House to remove the entire Economic Freedom Front (EFF) parliamentary caucus.

The DA argues that the 2004 Powers and Privileges Act of Parliament should be interpreted as not permitting the arrest of MPs, only non-MPs. If this fails, the party argues that such a measure is unconstitutional because it infringes on free speech within Parliament, and that it’s also inconsistent with the principle of the separation of powers.

In its court papers, the DA states, “To allow the executive to use force to arrest members on the floor of the House is a serious threat to the preservation of the separation of powers, and the maintenance of the independence of Parliament”.

At the heart of the matter is one paragraph: Section 11 of the Powers and Privileges Act. It reads: “A person who creates or takes part in any disturbance in the precincts while Parliament or a House or committee is meeting, may be arrested and removed from the precincts, on the order of the Speaker or the Chairperson or a person designated by the Speaker or Chairperson, by a staff member or a member of the security services.”

What did the drafters have in mind there? When they wrote “a person”, did they mean somebody who was not an MP – an intruder on to parliamentary premises, for instance, or a member of staff, like the parliamentary messenger who entered the House to stab Prime Minister Hendrik Verwoerd in 1966? Or did they mean, simply, everyone – MPs, staff, intruders, all people?

This is the crux of the issue. The DA maintains that Section 11 does not apply to MPs because elsewhere in the Act, where it mentions a “person”, it explicitly adds “member” where applicable, as in “A person, including a member, who contravenes…”

The respondents (the Speaker, the chair of the National Council of Provinces, and the government of South Africa) contend quite simply that a member of Parliament is a “person”. In the answering affidavit, the government points out that there are other sections of the Act where the word “person” is used in a way that clearly encompasses MPs. If Section 11 used “person” to exclude MPs, it would be “inconsistent with the plain wording of the Act”.

If the DA loses that battle, that’s not the end of its argument. Counsel for the party Sean Rosenberg argued that the Constitution explicitly protects MPs’ freedom of speech, and stipulates that MPs cannot be arrested or sued for anything they say in Parliament.

The DA accepts that the Powers and Privileges Act provides for police to enter the parliamentary precinct to “perform policing functions” in certain circumstances, but it argues that maintaining order in Parliament, and excluding MPs from the House, do not fall under the ambit of “policing functions” as envisaged by the Constitution.

The opposition party also contends that there are other ways to maintain control of the House that do not require force: “Members can be incentivised to behave appropriately by the threat of censure, suspension and adjournment”. In the event that an MP simply refuses to leave the House when ordered to do so by the Speaker – which has happened on several occasions with EFF MPs – the DA proposes that the answer is simple: “The proceedings are adjourned”.

The DA’s argument also holds that the use of security forces in the National Assembly amounts to a violation of the separation of powers, particularly given that the MPs being ejected may be opposition MPs. “People who see the police or the army being used to remove their elected representatives from Parliament will naturally doubt that they are neutral players in a game,” Rosenberg argues.

Counsel for government Jeremy Gauntlett has argued in response that there can be no “absolute” separation of powers. Gauntlett called the DA’s notion “extreme”, and said it would have extreme consequences. “Parliament would have to create a quasi- police service of its own to maintain public order and uphold and enforce the law within its precincts. The same would have to apply to the judiciary, which depends on the police to perform those functions within court buildings.” The Constitution, however, provides for a single police force.

Arguing in front of Judge Andre la Grange, Gauntlett sought several times to draw analogies between the responsibility of the Speaker in maintaining order in Parliament and that of a judge in a courtroom. The DA’s approach would result in the undermining of the proper functioning of Parliament, the government argues, particularly if a court were to rule that presiding officers could not order the removal of a MP no matter how grave their disturbance, or the extent to which the National Assembly was prevented from carrying out its legislative duties.

The government’s argument concedes the possibility that Section 11 of the Powers and Privileges Act might be misused by a Speaker – but says this still doesn’t mean that it runs contrary to the spirit of the Constitution.

“The fact that section 11 may be abused by a particular presiding officer, is no reason to hold that it is unconstitutional,” its argument states.

“That provision is not unconstitutional: members of Parliament whose conduct in its precincts place its functioning in jeopardy, by committing a ‘disturbance’, may not do so with impunity.”

On Monday, Judge le Grange reserved judgment in the matter. Speaking after the adjournment of court, DA federal chair James Selfe said that he would not be surprised if the matter ended up in the Constitutional Court.

“Clearly police can enter the Parliamentary precinct if a crime has been committed, or if there is imminent danger to life, limb or property,” Selfe said. “But what they cannot do, is they cannot come into the parliamentary precinct to remove members who are exercising their right to freedom of speech or action, in terms of Section 58 or 71 of the Constitution.”

Selfe said the DA was “reasonably confident” that its arguments would prevail.

For those who might be surprised that the DA would undertake a legal process in response to an issue that largely affects the EFF, the blue party’s court papers conclude on a note which makes it clear that its legal action should not be read as an endorsement of Julius Malema’s Fighters.

“The removal of the EFF from Parliament was a watershed moment in our democracy. If left unchallenged, there is every possibility that the executive will continue to be employed to regulate what should be the business of Parliament. Members will be arrested and removed for exercising their parliamentary rights in the name of order,” it states.

“While the DA has never supported the actions of the EFF, they demand that Parliament is conducted in accordance with the Constitution. They insist that they are able to represent their electorate without fear of arrest.” DM

Main photo: The officers violently restrained and removed the EFF members, some who put up a fight. The next few images speak for themselves. One EFF member was reportedly taken to hospital for a broken jaw. (Greg Nicolson)